As an 'outsider view' by a French novelist and critic taking his first visit to England, it makes an interesting contrast to the majority of accounts, which tend to filter the experience of the Isle of Wight through the cultural assumptions of English life. Bourget notices different things: he likens Shanklin, for instance, to a watered-down Deauville, noting the lack of a casino, and the solemnity of Sunday religious observance compared to his own country ...


Not a whisper, not a smile, nothing of that mundane character, half-decorous, half-sceptical, to be found in a similar ceremony in a seaside town in France.

His observations include the initial crossing from France to England, and then on to Ryde; observations of Shanklin; a train trip to Ryde ("a Dieppe without its port") and a visit to a charity bazaar at Quarr Abbey; a trip to Portsmouth ("the English Toulon") to see troops embarking for Afghanistan - how little has changed - on the HMS Jumna; and attending a cricket match at Shanklin. There may be more; the Internet Archive copy is truncated. 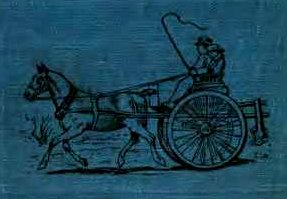 And finally: A Driving Tour in the Isle of Wight: With Various Legends and Anecdotes; Also a Short Account of George Morland and his Connection with the Island (Hubert Garle, IOW County Press, 1905, Internet Archive ID adrivingtourini00garlgoog).

As the cover shows, this wasn't a motor tour, but one by gig, Garle exploring the Island with an antiquarian friend, just called Miller. Like Bourget's, Garle's account is drawn from his diaries of a couple of decades earlier. It's extremely heavily padded with Isle of Wight historical anecdote, and it was an exercise in nostalgia (Garle's other book was the 1896 Hunting in the Golden Days) even at the time it was written:


The days I am writing of were before the shrill scream of the railway-engine and its foul smoke were known in the Isle of Wight, and when all was peaceful solitude compared to the present times of noise and bustle.

(It's fascinating how the modern horrors of yesteryear become the nostalgia of today; now many people yearn for the days when the Isle of Wight had a full rail network, and steam rail at that).

There is some interest in the historical detail in Garle's book - for instance, the account of Portsmouth when it was still heavily militarised, and the difficulties in getting a "horse-boat" to the Island - but personally I found most of his own account of his visit pretty dull. The illustrations, however, pleasant watercolours by E Hadfield, are lovely, if unrealistically 'warm'; the section about the artist George Morland is very good; and there's an appendix about Isle of Wight shipwrecks, and a nice selection of adverts at the end.