Clare was off at a writers' meeting today, so I took myself off chine-spotting. (Chines, as I've mentioned previously, are the miniature coastal ravines typical of the soft sedimentary cliffs of southern England.

The one in question was Sherbrook Chine, which cuts through the cliffs a little to the west of Budleigh Salterton, and appears as a very distinctive coastal feature on a number of historical postcards of East Devon. Its existence is down to erosion by a stream, running at an angle to the shore. that since the 1800s has been intercepted as a water supply for Budleigh; it's now an overflow from a reservoir. As I briefly mentioned in an earlier post, it was called "Sherbrook Ravine" in the Devonshire Association's 1890 Notes on the parish of East Budleigh. The pamphlet Budleigh Salterton - as it used to be (Richard D Woodall, 1954) shows that it provided access to the beach then ("In Victorian times ... Access to the beach at Sherbrooke Chine was then much easier").

Here are a few such images found on the Web - I'm assuming they're old enough to be out of copyright. 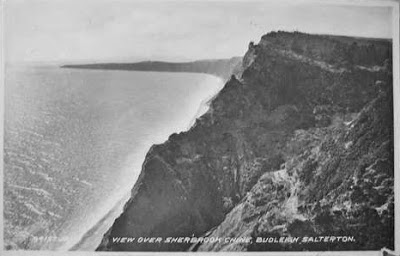 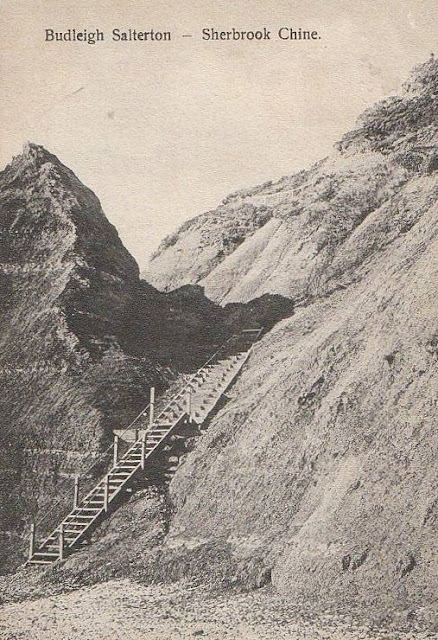 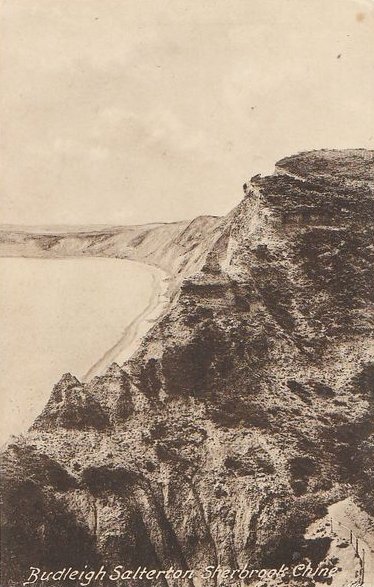 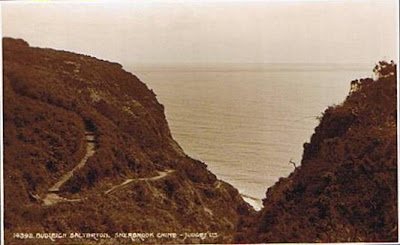 It's not so distinctive now. I took the scenic path up the cliff at the west end of Budleigh, which when the houses end turns into the South West Coast Path. After around half a mile, the path dips into an area of scrub and mature woodland, and you can see the top end of the chine, where the reservoir overflow stream goes under the path. Beyond the railings, it starts to descend coastward in shallow cascades: 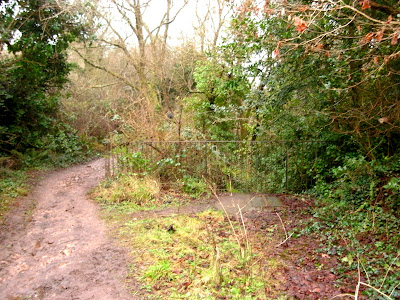 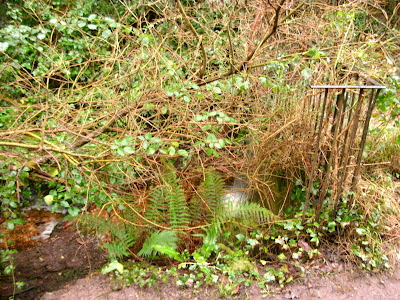 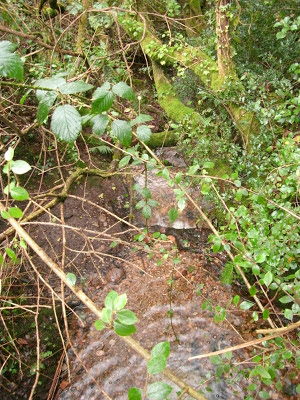 From the path east of this, however, you can see that the stream bed rapidly becomes a deep (and inaccessible) wooded ravine. There's such a vegetation cover that it's hard to convey it in photographs, except for the general V shape of the treeline that shows it's there; but you can see the sheer pine-topped western wall, which appears as a promontory when you get further away. Even that is not all that easy to photograph, since the edge of the cliff is flanked by thorny ground cover, making it difficult to get to a location with a clear view. 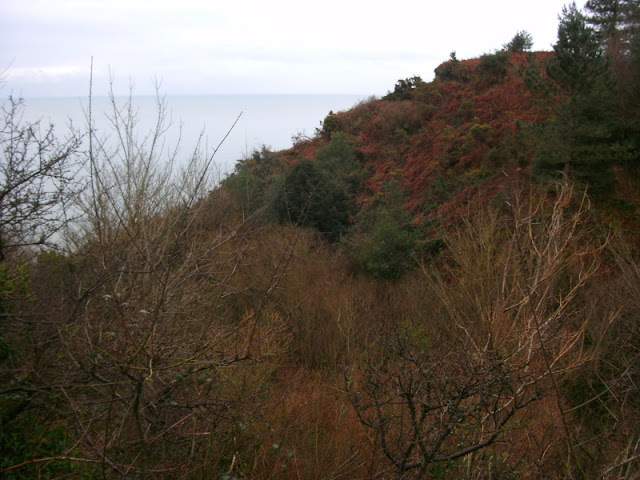 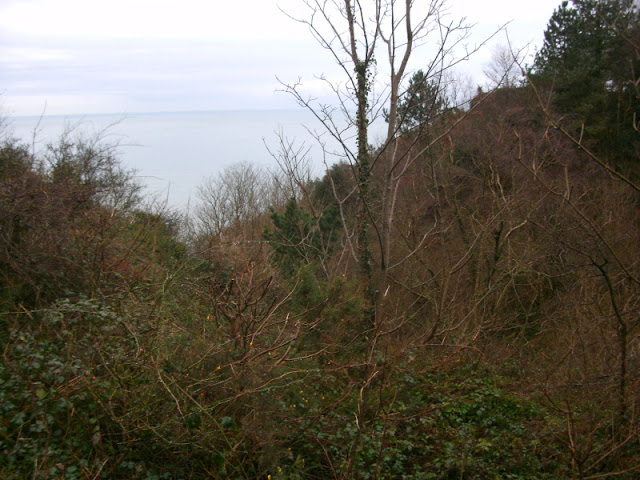 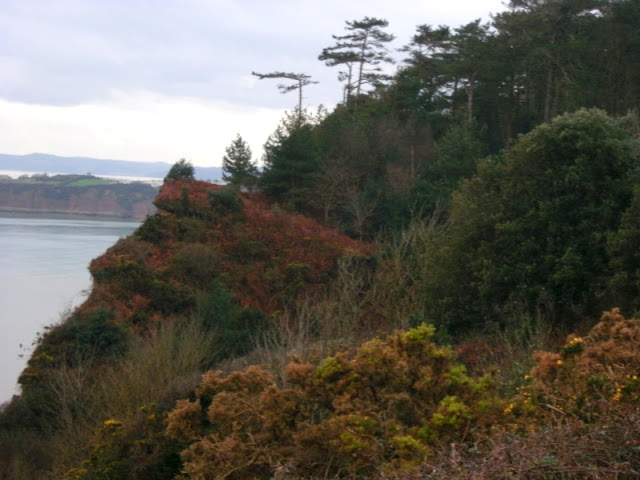 After taking these photos, I walked back down to Budleigh and west along the pebble beach, under scarily carious cliffs, toward Littleham Cove. As you go on to this stretch, you pass a "Clothing Optional" sign, though on a drizzly chilly February afternoon, I didn't have to worry about running into nudists. It's pretty heavy walking - I don't recommend it, unless the tide's low enough to expose the sand at the base of the pebble beach.


From beach level you can see the lower end of the chine, where the stream finally descends as a waterfall to beach level. The cliff profile has - naturally, given the long-ongoing erosion - radically changed since the old postcard photos were taken, and there certainly aren't any steps going up the chine. Land use on the clifftop has also altered, from open pasture (as you can see from the old map) to scrub, heath and tree cover. I don't know if this is just managed neglect, or intentional planting to stabilise the cliff.. 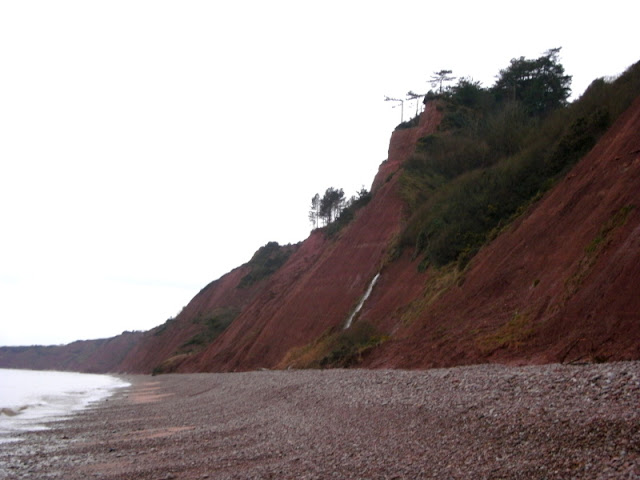 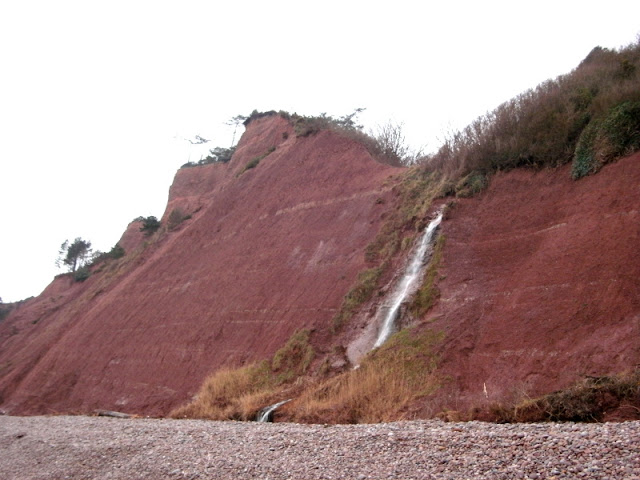 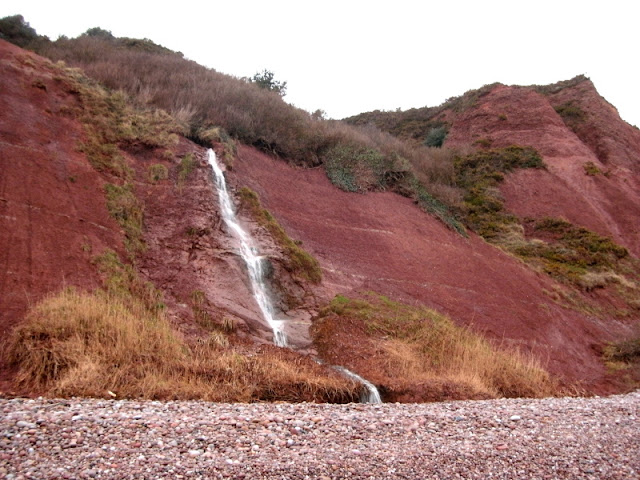 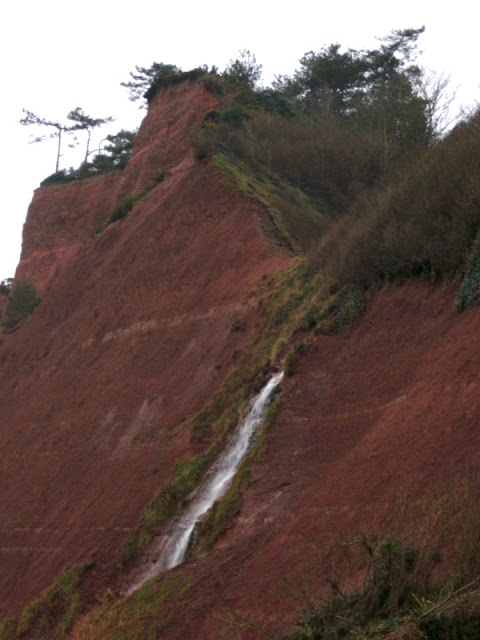 See Sherbrook later for an update and further exploration, 26th May 2013.

On a purely personal note, this was a bit of a test run: my first proper walk (i.e. something with a climb, and more than about a mile) since finishing chemotherapy, and in fact the first of any serious kind since starting the treatment about four months ago. Our normal coastal walks have been impossible, due to the general exhaustion and 'heavy legs' from the chemo. Today was pretty hard work - especially the hill-climb up from Budleigh, and the bit along the pebble beach - but I was determined to do it, and suddenly I find I've crept over the dividing line between feeling ill-tired, and merely feeling out of condition from four months of slobbing-about. While I'd have to take it slowly, I feel I'd be OK for more ambitious walks. Not a bad result. (And actually, I'm wildly understating - I feel quite euphoric to be something like up to speed again, like this).

Addendum: Oh, damn - I've given myself an earworm. The post title was a deliberate allusion to song Barrett's Privateers (version by The Real McKenzies) which has the refrain "I wish I was in Sherbrooke now". Now it's stuck in my head.
at 13:51