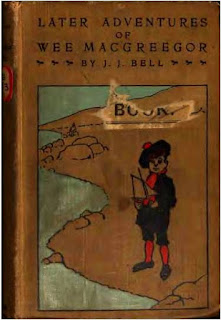 I can never see the word "tablet" without it raising somewhere in my mind this kind of tablet, the traditional Scottish confection - a buttery semi-crystalline fudge - that probably sprang from the same national sweet high-calorie tooth that gave the world the deep-fried Mars Bar. I first ran into it decades back, visiting Scottish relatives-by-marriage, and about that time found the accolade ...

... in a reprint of Florence Marian McNeill's 1929 The Scots Kitchen: its traditions and lore, with old-time recipes.

I only recently tracked the quotation down to a story by the Scottish journalist and author John Joy Bell, who wrote for the Glasgow Evening Times a series of dialect stories about a working-class Glasgow family. The central character is a young boy called Mcgregor Robinson ("Wee Mcgreegor"), and the quotation about tablet comes from the introductory story of the series, in which "Mcgreegor" and his father, against his mother's wishes, conspire to share a secret stash of almond tablet in a paper bag in his father's pocket: .


"Ha'e ye ett yer baurley sugar?" asked his father, during a pause in the childish queries.
"Ay; I've ett it...It's no' as nice as taiblet, Paw."
"But ye'll no' be carin' fur taiblet noo?"
"Taiblet's awfu' guid," returned Macgregor guardedly, with a glance upwards at his parent's face. "Thomson's paw gi'es him taiblet whiles."
"Aweel, Macgreegor, I'm no' gaun to gi'e ye taiblet...But if ye wis pittin' yer haun' in ma pooch ye micht—Ye're no' to let on to yer Maw, mind!"
The enraptured Macgregor's hand was already busy, and a moment later his jaws were likewise.
"Ye've burst the poke, ye rogue," said John, feeling in his pocket. "Noo, ye're to get nae mair till the morn. Yer Maw wud gi'e 't to me if she kent ye wis eatin' awmonds." 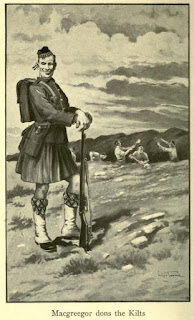 The compilation book of the first series is online: see Wee Mcgreegor (JJ Bell, pub. New York and London, Harper & Bro, 1903, Internet Archive ID weemcgreegor00belliala); the Project Gutenberg Australia copy (1100201.html) has an introduction by Bell explaining the origin of the stories. Unlike many fictional child characters, Wee Mcgreegor aged as the cycle of stories continued, and we find him somewhat older in Later Adventures of Wee Mcgreegor (1904) and, topically, at 19 and joining the army in Wee Mcgreegor Enlists (c.1915). By this time, Macgreegor's adventures have taken a far darker flavour than worrying about sweets; his fiancée breaks off their engagement, and he kills a German and is wounded in battle, before things turn for the better.

While the JJ Bell stories have been pretty well forgotten, a look through Google Books shows the fallout that probably still continues: generations of people, animals and things called Macgregor being saddled with the prefix "Wee". 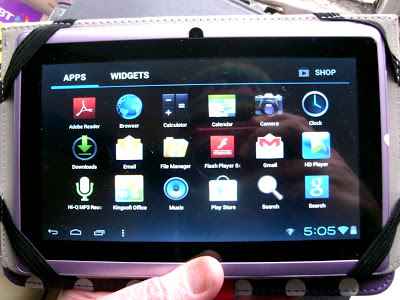 Tablet digression aside, I finally made the jump to tablet computing. A Samsung Internet-capable phone has proven far more useful than I'd imagined, but the small screen size, multi-tap input and poor bandwidth are impediments that had set me thinking about better options. A couple of weeks back I was discussing this with Felix Grant (of The Growlery), and he recommended the Android Allwinner. At only £50 for the 7" screen option, it seemed not a great risk to try out, so I got one a week ago.

It's brilliant. I won't go into vast technical detail, as I'm sure tablets are familiar territory to many readers, but it's just what I wanted for note-taking on the move, along with web browsing and e-mail if I'm in range of a  BT wi-fi hotspot. The package I got didn't include a word processor, but it was easy to find a free app, Kingsoft Office, for creating Word documents, and the pop-up keyboard is fine for two-fingered typing. I tried the voice input, but I think it might need a deal of adjustment on my part to what accent it expects (maybe I'm not RP enough). Even when configured for British English, it persistently hears "six" as "sex", and it produced this ...

... when I tried it on a bit of text handy, the blurb to RA Lafferty's Space Chantey:


'Will there be a mythology in the future, they used to ask, after all has become science? Will high deeds be told in epic or only in computer code?' 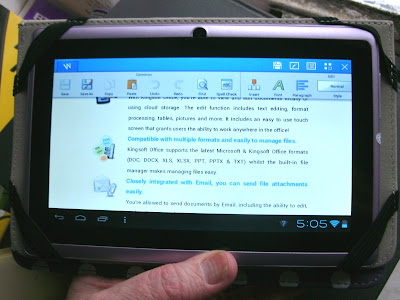 The instructions, a tiny flyer in Engrish ("Use headphones shoulds not be too big volume, If feel tinnitus, Lower the volume or stop using it"), are pretty minimal, but there's plenty of generic guidance on Android operating systems online. It has to be said that this is an enthusiast's device: in a lot of areas, you may be on your own in unfamiliar areas, and need to be comfortable with working out how things work; for instance, this is my first introduction to the possibility of cloud storage, as well as a lot of the protocols of wi-fi connection.

I found only one major problem: the so far inexplicable failure to be able to see some files and directories via the USB connection to my PC. However, there proved to be a simple workaround: to e-mail Word files as attachments to myself, from inside Kingsoft Office, using the built-in Gmail connection and another free add-on app, Android Attach, that over-rides Android Gmail's limitation to photos and videos.

All in all, taiblet's awfu' guid value for fifty quid.

Addendum: even better. Felix just drew my attention to the availabilty of another app, Graffiti for Android. Graffiti is a stroke-based input method using stylised alphanumeric gestures. Since I'm thoroughly familiar with the stylus-based version on my old Palm M100 organiser, I just gave it a try, and was sold on it instantly; for me at least, it's far superior to the touch-screen keyboard.