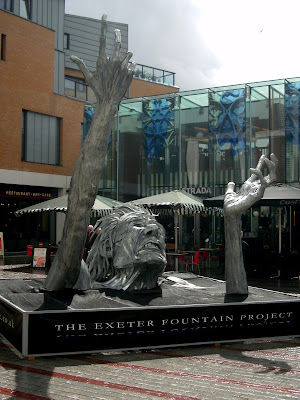 Passing through Exeter today, we saw Simon Ruscoe's temporary sculpture installation Only Hope Remains on the central square of Princesshay. It's part of a series - seven steel figures struggling to stay above an imaginary waterline - which Ruscoe calls The Exeter Fountain Project: "a response to the major fears, angers, frustrations amd struggles faced by humanity today". 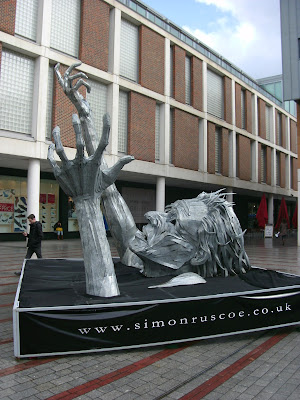 From the press release:

On Friday 29th March, a 20 foot steel sculpture appeared unannounced and overnight in Princesshay’s main square. Exeter born artist Simon Ruscoe's sculpture, Only Hope Remains, is set to amaze shoppers in the city for two weeks during the Easter holidays.

In 2004 Ruscoe embarked on the creation of a massive collective sculpture with the ambition of seeing it on permanent display in the city; the work is now almost complete. The sculpture on display in Princesshay is one of seven steel figures, some over twenty feet in height, struggling to stay above an imaginary waterline which Ruscoe labels The Exeter Fountain Project. These incredible sculptures are made up of over ten thousand pieces of metal, each one cut by the artist’s hand. Ruscoe’s vision is that the figures be situated in water to create stunning reflections that could be floodlit to achieve maximum impact.

The figures are a reaction to injustices in society, reflecting tensions and troubles that exist in our times. While each figure can stand alone, as a group, they are united in their struggle for survival. Simon Ruscoe comments, ‘Over the last few years, living in this country has got increasingly hard for the majority of people. Most of us have to work harder and harder simply to maintain our lives, for many just surviving is a real and frightening reality. Holding your head and your family’s above water is symbolic of the harsh day to day reality of our times. The figures I have created are neither emerging nor drowning. They question the future, who will sink or swim?’

Ruscoe is aware that the work might be contentious but he believes; ‘My intention has never been to offend people. I believe that my sculptures are both beautiful and challenging and I see that as a good thing. We are emotional passionate beings, living in challenging times; I believe the art we surround ourselves with should reflect this. Work that achieves this can only empower us.’

Because of his attachment to Exeter and its people, he’d like to offer these sculptures to the city with the aim that these will, in time, become iconic for the South West in a similar way to The Angel of the North for Tyne and Wear. The sculpture would attract great attention and promote Devon as a dynamic and culturally exiting place to live. Ruscoe adds: ‘Being around art that is moving, meaningful and beautiful, enriches people’s lives, it encourages others to visit and helps give a city a genuine sense of soul.’

People may also be aware of other sculptures by Simon Ruscoe in Exeter. His metal unicorn is situated adjacent to the Phoenix Arts Centre and the University of Exeter recently commissioned sculptures by him. Apart from working as a sculptor, he has funded the entire project himself working as a cleaner, a hospital porter and a technician in a number of Devon Galleries and Universities. Simon adds: “I would like to thank Princesshay management who have bravely supported the project by offering the sculpture to be exhibited for two weeks over the Easter period.”

Wayne Pearce, Princesshay Centre Director, “Simon is incredibly passionate about his exhibition and we are pleased to support him by offering a venue for his latest work to be shared and viewed by the public. As a centre we are always keen to support local initiatives and projects pioneered by members of the community. Simon is clearly very talented and we’re sure his latest sculpture will catch shopper’s attention!”

Following the exhibition in Princesshay, Simon is looking for an organisation or an individual with the vision and passion to help either with promotion or citing the work. Perhaps a landowner who would allow him to exhibit one or more of the figures in a prominent place so that he can gain support and interest for this thought provoking and spectacular sculpture.

I hope he succeeds in finding a prominent location (though Clare didn't like it, I found it impressive). Exeter's collective attitude to public sculpture in its modern developments strikes me as idiosyncratic, with many of the best works ill-placed. For example, we have the excellent Exeter Riddle sculpture by Michael Fairfax, a striking mirrored obelisk that demands a central location in some plaza - but which is instead sidelined on the High Street pavement (see Google Maps).

Conversely, the goddawful Blue Boy, a complete eyesore, gets a prominent location in the middle of Princesshay. This Victorian cast iron commemorative statue is painted, as some over-literal interpretation of the name, in bright blue gloss paint. It'd look perfectly fine as cast iron, and I can't imagine what was going through the head of whoever decided on the lurid and deeply unaesthetic paint job.

There are a lot of very good public artworks around Exeter, though you often have to be observant to find them: see Exeter Memories / Exeter's Public Art. Probably my favourite, in a quiet sort of way, is the Elaine Goodwin 'City Wall Mosaic' in the entrance to Broadwalk House (see Exeter Memories again).