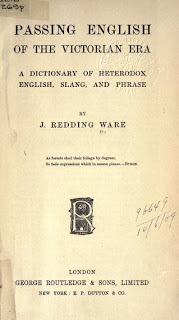 It's extremely interesting reading. Unlike many compilations of now-historical slang, it isn't a retrospective view on slang terms that "made it" into established language, but a collection of ephemeral and highly local expressions, generally annotated by date and location. From an initial dip into the book, the majority of its wonderfully colourful expressions I'd never encountered before. For example:

Church a Jack, To (Thieves'). To remove the works of a watch from its case, and put them in another, of course with the view of destroying the identity of the article.

Oysterics (Mid.-class, 1900-04 on). A coined word, suggesting hysterics, to satirize the panic in reference to oysters creating typhoid fever.

Pusserspock (Naval). Corruption of 'purser's pork' - bad, hard salt-meat, name being given to it because the purser was the purchaser.

James Redding Ware, the London-born author of the book, is also interesting. He's better known by his pseudonym Andrew Forrester, in which role he was a wide-ranging jobbing writer. His particular innovation was in writing stories of Miss Gladden, one of the first female detectives in fiction (though definitions vary): see The Female Detective (Paul Di Filippo, Barnes and Noble), and No1 in ladies' detective tradition back in print after 150 years (Alison Flood, The Guardian).

He also wrote many magazine articles, plays, at least one novel - The fortunes of the House of Pennyl: A Romance of England in the Last Century (James Blackwood, 1860), and a number of potboiling books, including The Road Murder. Analysis of this Persistent Mystery (1865), The Modern Hoyle; Or, How to Play Whist - Chess - Cribbage - Dominoes - Draughts - Backgammon, and Besique (1870, co-written), The Isle of Wight (1871), Before the Bench: Sketches of Police Court Life (1880), Life and Speeches of His Royal Highness Prince Leopold (1884), Wonderful Dreams of Remarkable Men and Women (1884), Famous Centenarians (1886), Mistaken Identities: Celebrated Cases of Undeserved Suffering, Self-deception, and Wilful Imposture (1886), and The Life and Times of Colonel Fred Burnaby (1886). And these are just the ones under his own name.