John Ptak's blog Ptak Science Books has an interesting category History of Blank, Missing and Empty Things, and this applies very well to the site of Crofton House, a now-demolished mansion near Titchfield, Hampshire.

I remember Crofton House; around 1970, it still existed - a run-down and abandoned 'haunted house' down a lane off the Titchfield Road a bit north-west of Stubbington - and despite signs of occupation in an adjacent wing, I used to sneak in with friends to explore it. It was undoubtedly dangerous; the big curving stairs at the back of the entrance hall were held together by little more than the carpet; the floorboards were rotten; there were sharp laths sticking out of the walls; and so on. There were also grounds, with a half-collapsed conservatory, an area packed solid with overgrown rusting cars and lorries, sheds containing crates of machine parts (apparently abandoned), and lots of climbable trees overlooking the fields. After several visits, I recall being chased out with threats of calling the police; bright red KEEP OUT! signs appeared on the lane, and ultimately a fence. I forgot the place, and when I left my home town after university in 1977, I never had cause to revisit the area.

But when Google Earth came on the scene, I was browsing old haunts. I saw the main house was gone, and I wondered what had happened to it. I tried to find out the history, without success. But I just asked in The Gosport Area, a new Facebook group for discussing memories of the town where I grew up, and somehow the process of asking cleared a mental blockage. I'd been unwittingly sabotaging the search by the assumption that "Stubbington" was a keyword; once I'd switched this to "Titchfield", results started to appear - enough to put together a brief account of the vanished house. Its history, like the villas of the southern Isle of Wight, is one of a heyday in the era of country mansions, followed by decline and decrepitude after that era ended.

So, firstly, I found a very brief description in Pevsner:


CROFTON HOUSE, set back to the W of the Titchfield road, is a five-bay, three-storey, yellow brick mansion of c.1800. The three centre bays project slightly and are surmounted by a pediment, with fretted brickwork pattern under the cornices and slopes of the pediment (a local mannerism). A delicately composed building, unfortunately derelict at the time of writing
- Hampshire and the Isle of Wight: The Buildings of England, David Wharton Lloyd & Nikolaus Pevsner, 1967

At least with what I can find online, the traceable story does go back to "c.1800". The oldest map I can find it on is 1797 - this one, which has a "Crofton Ho" marked - but I haven't so far traced the builder. However, the successive owners in the 19th century are well-documented in newspapers archived in the Nineteenth Century British Library Newspapers database. The first reference is to

Its sale after Mill's death provides a detailed description of the house and environs.

That elegant, modern, well-constructed COPYHOLD VILLA, known as CROFTON HOUSE, most delightfully situate on an eminence, with one mile and a half from the Sea, one mile of Titchfield, nine of Southampton, three of the market town of Fareham, and 76 miles from London, in a beautiful and much-admired part of the county of Hants; commanding interesting marine views, extending to the Isle of Wight, the Needles, &c, and diversified prospects of the rich surrounding country, which abounds with game, the roads good, and the neighbourhood select and social; with pleasure ground embellished with full-grown forest trees and plantations, green house, walled garden in perfection, coach houses, stabling, and all suitable offices; farm house at short distance, with capital barns, stabling, granary and buildings and attached pasture and arable land; containing in the whole Thirty-Three Acres, with 13 Acres and a Half of Leasehold, held till Michaelmas 1811, and 4? Acres till 1807, in addition. The Villa present two handsome elevations, and contains a lofty, cheerful entrance hall, with admirable staircase, excellent well-furnished dining and drawing room, each 28 feet by 20 feet, breakfast parlour, library, boudoir, numerous family bedchambers, dressing and powdering rooms, water closets, and servants apartments; the domestic offices are of the best description, with good cellaring, and the whole well supplied with water. The purchaser may be accommodated with the appropriate Furniture, Farming Stock, &C, at a valuation.
- The Morning Post, London, August 23, 1806

("Copyhold", I didn't know, is an archaic form of land tenure based on manorial rights and law. It was finally abolished, and absorbed into modern freehold and leasehold).

The buyer was the elderly William Gemmell, who died early in 1820 aged 87 (he was buried in Titchfield on April 4 1820), and Crofton House then went up for sale again; an ad appears in the Morning Post of May 23, 1820. The next owner was a gentleman of Irish roots, Thomas Naghten (or Naghton - c. 1783-1832 - see RootsWeb, TheNaughtons in Ireland). The house was occupied by his family after his death, but a few years after the death of his daughter Louisa on February 17 1848 (aged 21), the house again was advertised for sale (Hampshire Advertiser, August 11, 1855) along with all of its contents. The ad gives an interesting glimpse of the accoutrements of a mid-Victorian mansion:

(A "loo table" is a tip-up table originally for playing the card game loo. "Cheffioneer" is evidently a garbling of chiffonier. "Teapoy" is also a table).

The new owner, who evidently didn't like the decor, was a Major Wingate (Major Sir George Wingate, KCSI, b. 1812, who'd had a distinguished career as an engineer officer in the East India Company). After his death on February 7th 1879, the next owner was a "Major Boyd" (some sources say "Colonel Boyd"); he died some time in the 1880s, and his widow married the Rev. Rupert W Pain in 1889 (see the Hampshire Advertiser, January 09, 1889) Crofton House remained with the Boyds into the 20th century; Who's Who lists it as the address of a Lt.-Col. Charles Purvis Boyd, J. P, who died in 1914. It finally went up for auction at an executor's sale ("re Mrs RGC Boyd, Decd.) on June 25th 1930. The Times ad for Jun 16, 1930, has the only image of the house I've been so far able to find. 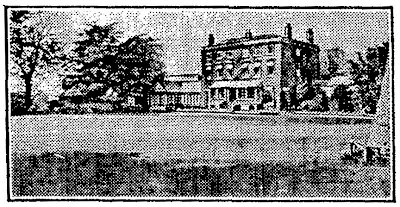 Kelly's Directory for 1935, listing private residents in the Crofton area, gives the then occupant as Kenneth Charles Rees-Reynolds, who Google finds to have been a London-based chartered surveyor, and director of various companies, who died in 1963. Whether he owned/occupied the house until then, I don't know, but the decaying house and motor scrapyard I saw in 1970 suggested the house had been neglected for longer than 7 years. Its eventual end is documented in a later book:


Crofton House near Titchfield, long derelict, has, alas, been demolished after fire damage; it was a delicately composed Classical house in yellow brick.
- Buildings of Portsmouth and its environs, David Wharton Lloyd, 1974

The remaining wing of Crofton House, that adjacent to the walled garden, has been redeveloped as mews residences. The lane, like so many lanes I remember from childhood, is now gated.

Addendum: Should anyone want to pick up this topic and run with it, a National Archives search shows that the Northumberland Record Office has records of the Crofton House Estate:

Addendum: Ryan Allen, whose family owned Crofton House in its latter days, has kindly sent me a photo.