The ITV two-part programme Mystery Map aired recently: see Mystery Map: Ben Shephard and Julia Bradbury talk ghosts, UFOs and weird happenings. The second episode looked potentially of interest, as it covered the mystery of the "Devil's footprints" incident of 1855. The account, however, was very cursory. It was filmed in part by the River Exe in Topsham, using fake snow in Topsham Museum's garden to attempt to recreate the horseshoe-like prints. The snow, however, wasn't the only thing that was fake; I'm sure I'm not the only viewer to be puzzled by the shots of this location visited by Julia Bradbury and identified as Topsham: 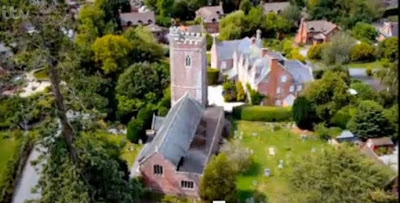 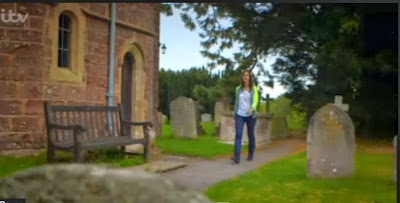 Anyone who lives here will immediately spot it's not Topsham. Despite superficial similarity, Topsham church (St Margaret's) looks like this, with the tower on the side, not the end:

The church featured in Mystery Map is actually that of the nearby village Clyst St George. See Google Maps:

Whatever the reason (filming permission issues? Wanting the location to look more folksy? Sheer poor research?) it was lazy and unprofessional of the programme-makers to make this substitution without explanation. For readers in the UK ITV region, the relevant episode of Mystery Map can be seen on ITV Player until around Dec 27th; the Devil's Footprints section is in the third segment.

Screen shots reproduced as fair use for the purposes of criticism and review.