We visited the Isle of Wight at the weekend, and despite a poor prognosis for the weather, Saturday 15th turned out to be a beautifully fresh and changeable autumn day, and we went to Carisbrooke Castle (for me, this was a revisit after a gap of around 50 years).


Carisbrooke Castle is a classic motte-and-bailey castle that has been much-depicted, appearing in any number of Isle of Wight travelogues from the 1700s onward, and it's as popular now as it was when Maxwell Gray described it - thinly disguised as "Carlen Castle" - in her 1899 story Sweet Revenge:


Though ruined, Carlen Castle sat proudly upon its steep acclivity, its dismantled and crumbling keep on the seaward summit, its fine, towered gateway facing landward with stately defiance, and looking up a long valley between chalk hills. It made a good point of view from Carlen House, a modern white mansion on the opposite hill slope, half hidden by thick beech woods that, screened by each hill from the salt sea winds, climbed both hills, the slopes of which, meeting in a broad V, allowed a glimpse of sea from the level highroad running through the village at the foot of the castled hill.
These ruins were among the show places of the country, and the object of many excursions and picnics all the year long; but chiefly in the autumn season, when Carlen folk gathered a double harvest—one from the fields and another from visitors, whose four-horse coaches, wagonettes, and chars-abanc clustered thickly outside the Carlen Arms and the Castle Inn, in company with innumerable bicycles, the riders of which found it easier to climb the precipitous wooded road to the castle gate without wheels. Though of steep ascent it was a fair road, screened by beech and ash, offering lovely prospects, and passing at its termination on arches over a dry moat. A groove for a portcullis showed what once had been, and loopholes in each beautifully rounded turret by the vaulted entrance recalled days when the bows of English yeomen were feared by the world.
- Sweet Revenge, from The World's Mercy, Maxwell Gray, 1899 (see An Old Song). 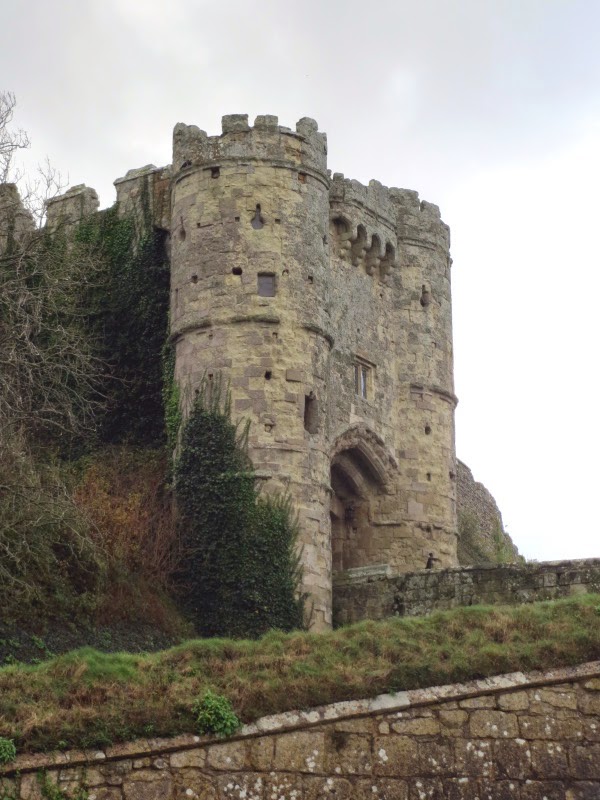 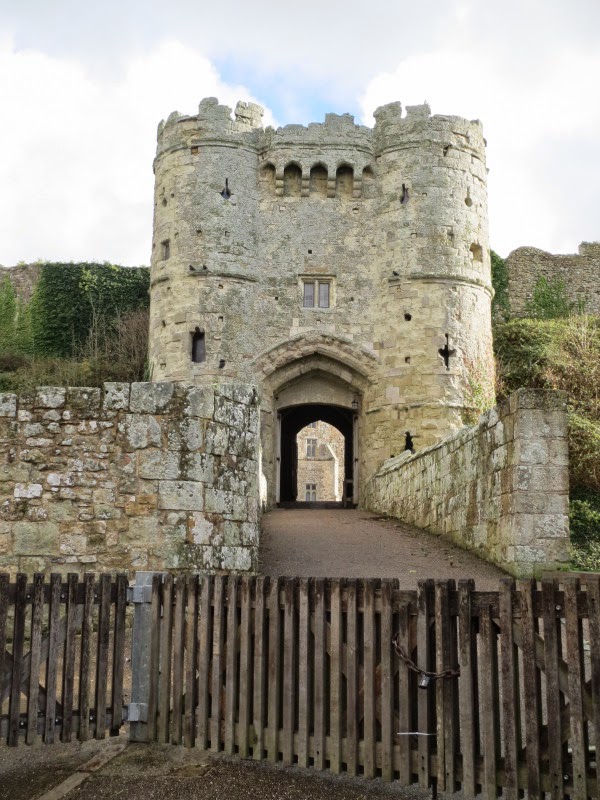 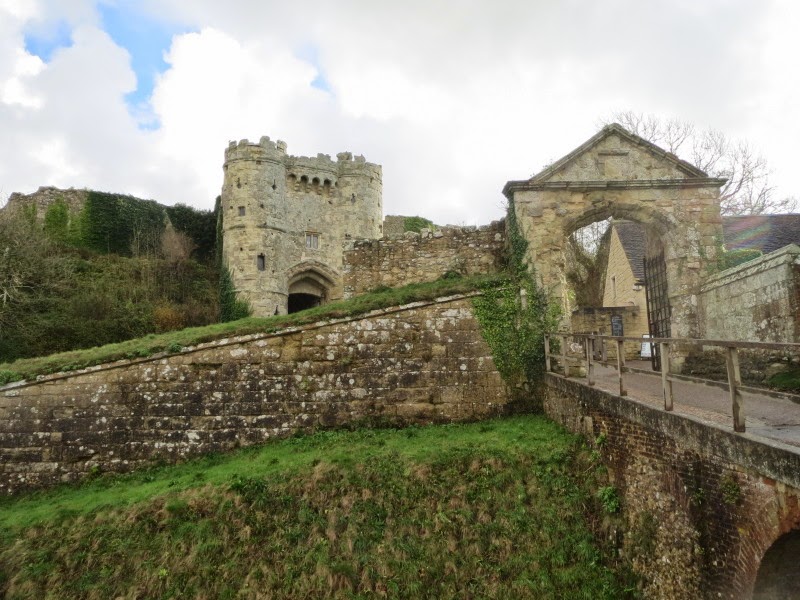 Compare "Carisbrooke Castle gate" from John Hassell's 1790 Tour of the Isle of Wight: 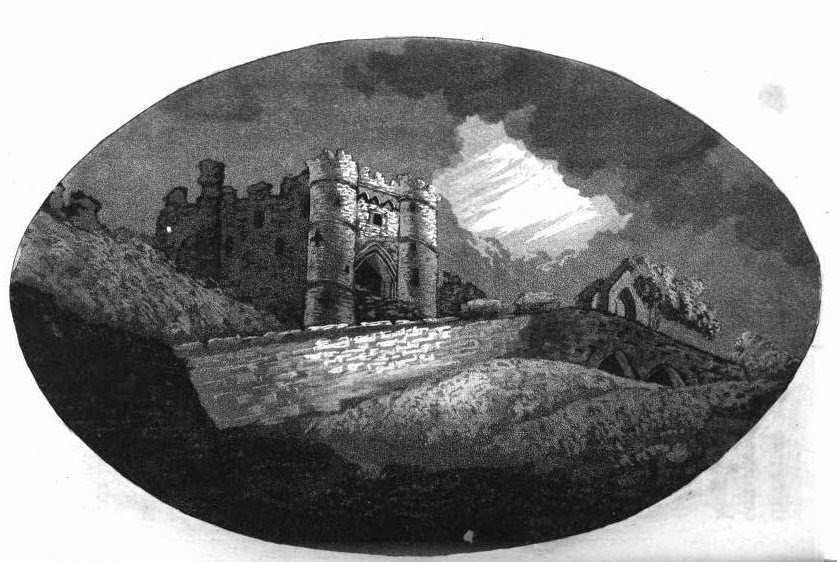 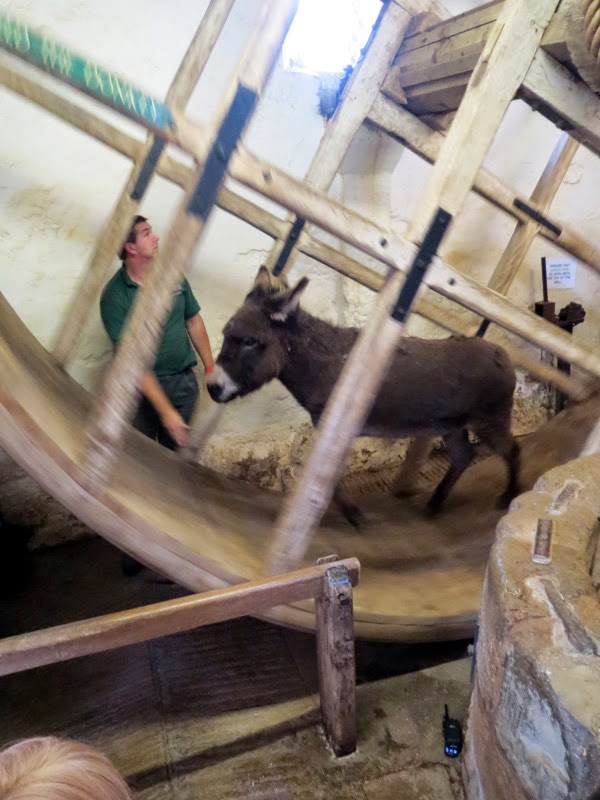 This is the famous donkey-powered wheel that traditionally raised water from the 160-foot well. Nowadays the donkeys ware for demo purposes only, and work about 5 minutes a day. The talk given by the guide had a number of interesting points, including a demonstration of the depth by pouring some water down: it takes about 4 seconds before you hear the splash (the well is about as deep as Nelson's Column is high). Historical accounts, such as this 1781 Critical Review piece, say that formerly it was the practice to drop a pin down, the acoustics of the well amplifying the sound.

Another point of interest is the well's role in J Meade Falkner's 1898 smuggling adventure novel Moonfleet. (see Internet Archive moonfleet10743gut). Though largely set in Dorset, Moonfleet features an episode in which a hidden diamond, the Mohune diamond, is recovered from its hiding place in this well.


... so came to a square building of stone with a high roof like the large dovecots that you may see in old stackyards.

Here our guide took another key, and, while the door was being opened, Elzevir whispered to me, 'It is the well-house,' and my pulse beat quick to think we were so near our goal.

The building was open to the roof, and the first thing to be seen in it was that tread-wheel of which Elzevir had spoken. It was a great open wheel of wood, ten or twelve feet across, and very like a mill-wheel, only the space between the rims was boarded flat, but had treads nailed on it to give foothold to a donkey. The patient beast was lying loose stabled on some straw in a corner of the room, and, as soon as we came in, stood up and stretched himself, knowing that the day's work was to begin. 'He was here long before my time,' the turnkey said, 'and knows the place so well that he goes into the wheel and sets to work by himself.' At the side of the wheel was the well-mouth, a dark, round opening with a low parapet round it, rising two feet from the floor.
- Moonfleet

Chapters 14 and 15 tell of the the recovery of the diamond from the well, and the ensuing fight for its possession, resulting in the loser ending up down the well. This leads to a point I haven't been able to verify; one of the guide's anecdotes concerned a possible factual basis for this episode in Moonfleet, the story that one Elizabeth Ruffin, daughter of the Mayor of Newport, threw herself down the well in 1632. A look in Google Books finds a sole data point for this in Gay Baldwin's Isle of Wight Ghosts series:


I have discovered however that in 1632 Elizabeth Ruffin, the young daughter of the Mayor of Newport, "threw herself down a well at the castle." Oglander, the Island's 17th century diarist who recorded this in his papers, assumed this was the well in the Keep. It would appear that he assumed wrongly...
- Gay Baldwin, Isle of Wight Ghosts Book 4, 1996

It seems very surprising that such a sensational event isn't duplicated in earlier historical sources, and it's not in Oglander's classic The Oglander Memoirs (Internet Archive oglandermemoirse00oglaiala). I e-mailed Ms Baldwin about a citation, and she recalls it coming from "R J Eldridge’s book Newport in Bygone Days". I'll check this out.

The Bodleian entry identifies RJ Eldridge as Robey James Eldridge (1880-1967); he's the son of the Newport solicitor and writer Robey Frank Eldridge (1843-1930), who I mentioned in the previous post, Poets of the Wight. See the follow-up post The Kestyns of Cather Castle for more about RF Eldridge and his works. 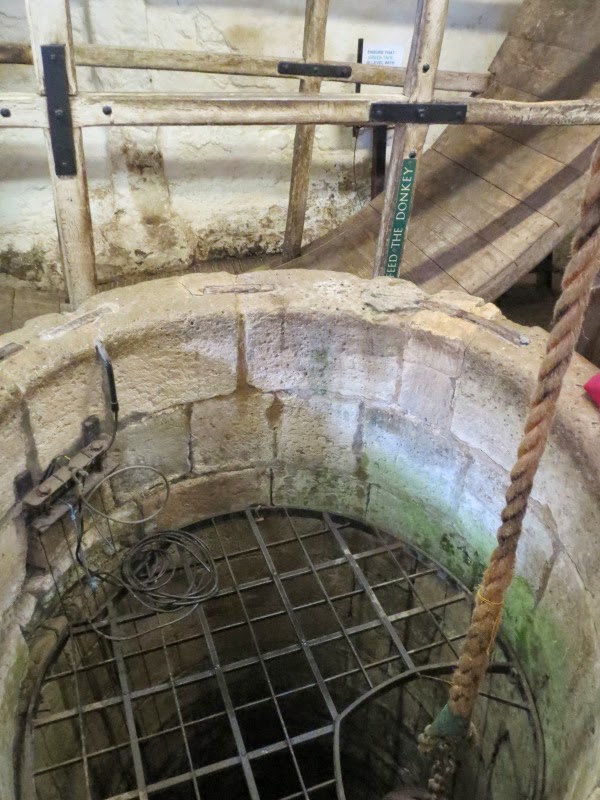 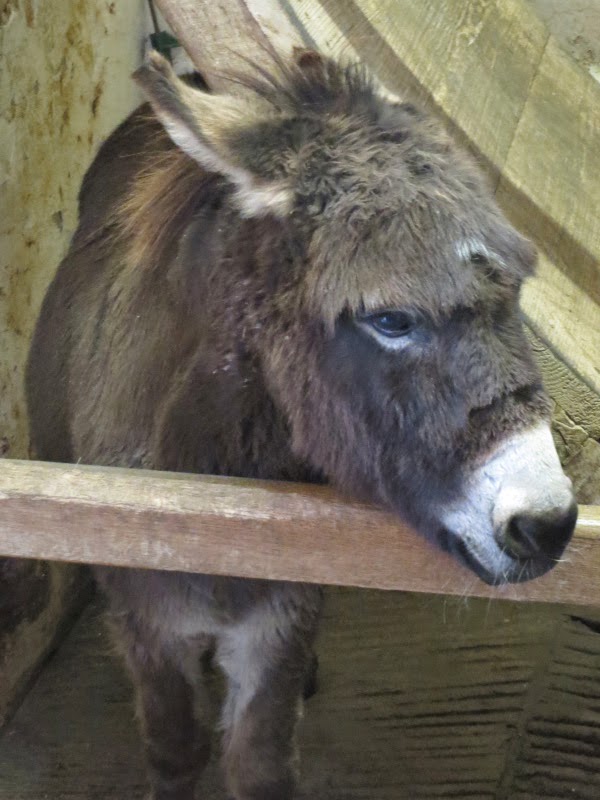 On to more photos. The views from the ramparts, and particularly the Keep, are stunning, ranging across the Isle of Wight's central downs (off in the direction of the Tennyson Trail), across the Vale of Arreton to Shanklin Down, across Carisbrooke village to Parkhurst Forest, and over Newport and the Medina estuary, with glimpses as far as the Solent, Portsmouth and its Spinnaker Tower. 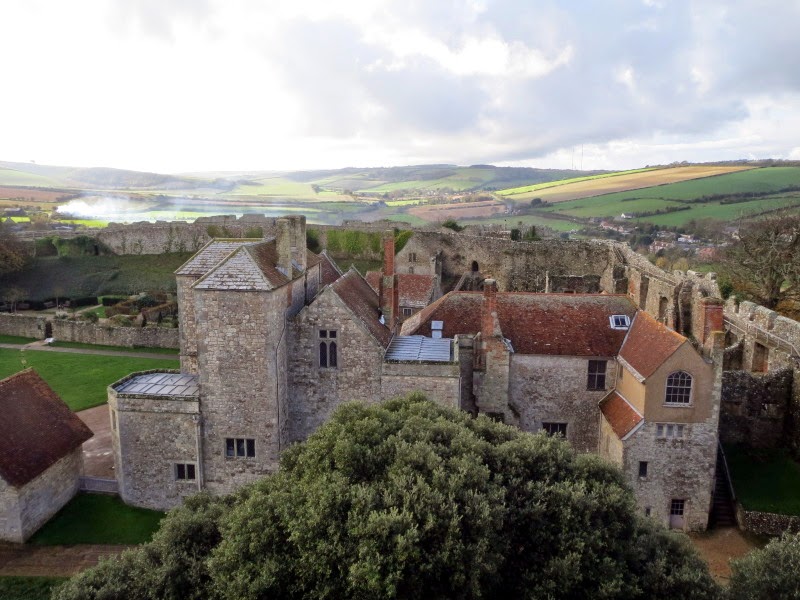 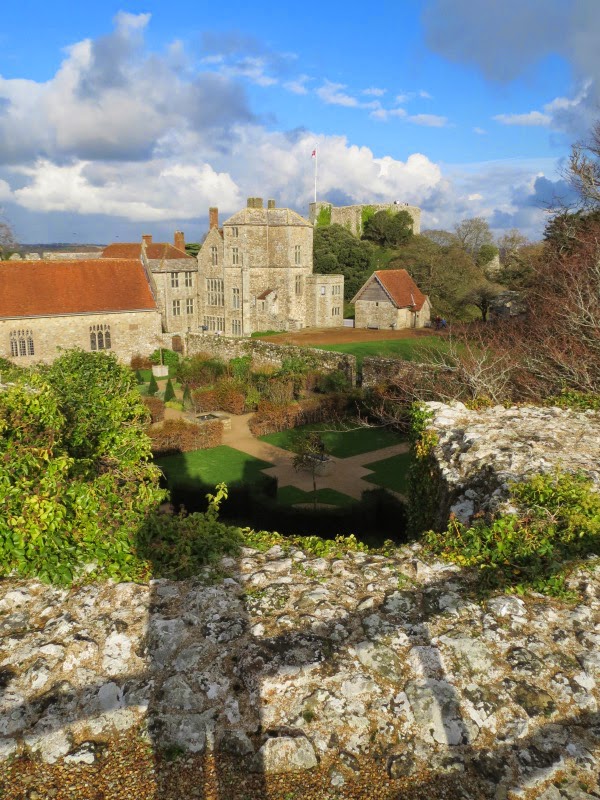 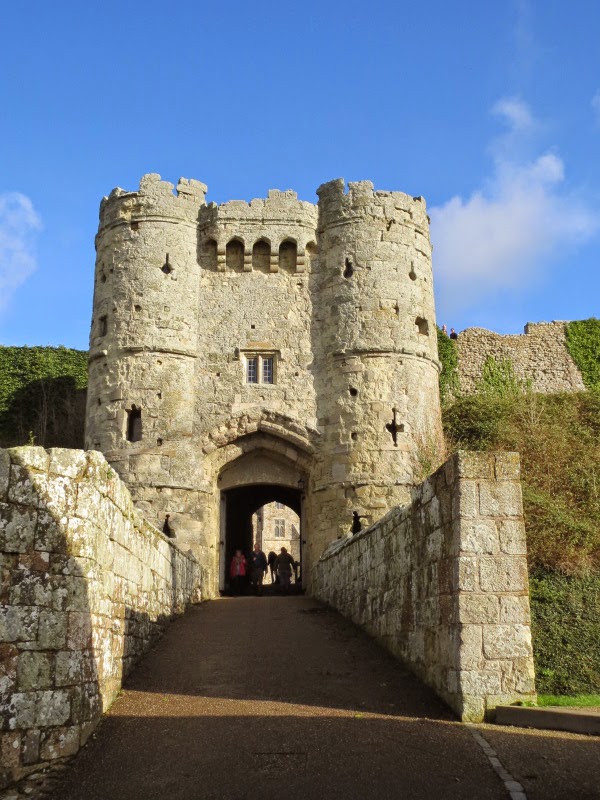 Here's a photo from last year, descending the Tennsyon Trail into Carisbrooke. 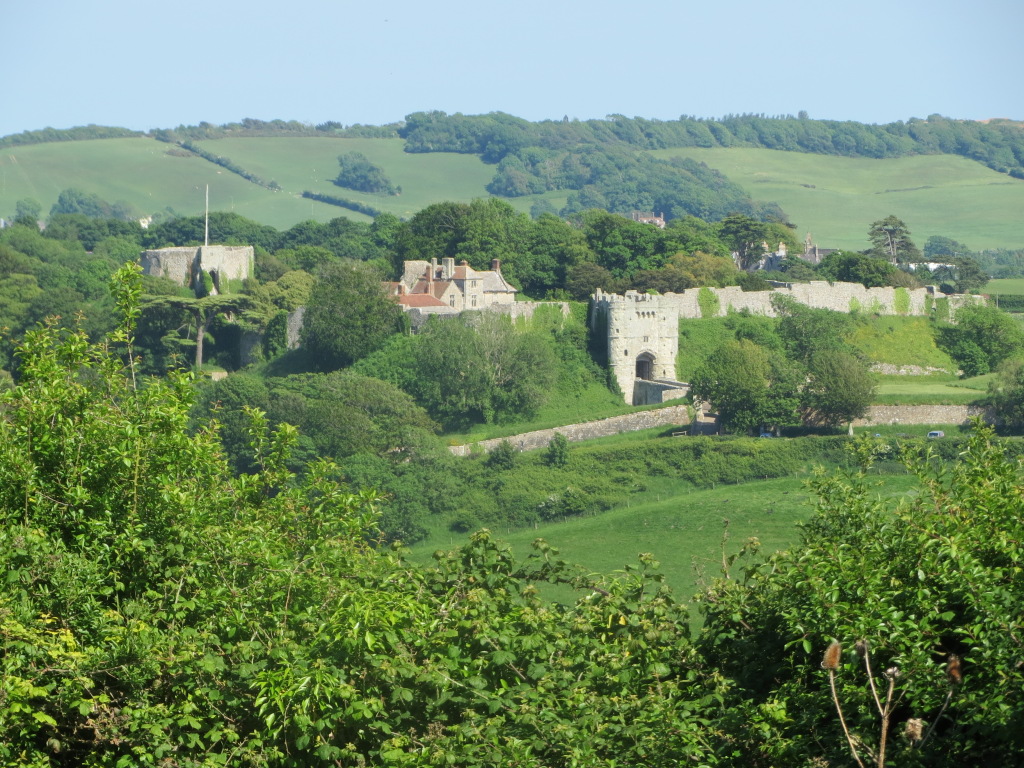