A bit more about Southlands, the long-disappeared marine villa at Blackgang, Isle of Wight: one segment of its short history links in to the story of two notable figures in Victorian Anglo-Catholicism, and that of a tragic exchange visit.

A bit of background. We tend to consider Protestantism and Catholicism as very separate entities. There is, however, a significant school of thought within the Anglican church - Anglo-Catholicism - that embraces beliefs and practices that are traditional Catholic. These ideas had a particular flowering in the middle of the 19th century with the Oxford Movement, which "argued for the reinstatement of lost Christian traditions of faith and their inclusion into Anglican liturgy and theology" (Wikipedia). One of the major figures was Edward Bouverie Pusey, after whom the movement acquired the pejorative nickname 'Puseyite'. Pusey became extremely influential in the movement following the censure of his 1843 sermon The Holy Eucharist, a Comfort to the Penitent, which argued, controversially, a Catholic-like stance that the bread and wine of the Eucharist weren't merely symbolic, but literally contained the Holy Spirit.

Another aspect of the movement was the establishment of religious orders - essentially, Anglican monks and nuns - for various purposes, from contemplative to charitable. One such order was The Society of the Sisters of Mercy of the Holy Trinity of Devonport, formed at the behest of Bishop Philpotts of Exeter to combat vice and drunkenness among the poor of Plymouth. Under the leadership of Priscilla Lydia Sellon (later called Mother Lydia), this merged with a smaller London community, the Sisterhood of the Holy Cross ('Park Village Community') and later established its base at Ascot Priory.

The organisation did worthy stuff - it's not well known that it provided nurses for the Crimea - but it was also controversial, attracting accusations that its members were just closet Catholics (it was described as a 'Puseyite nunnery'). This led to a public enquiry 1849, led by Philpotts, which exonerated them, though the slurs continued; see, for instance, the satirical piece Convent of the Belgravians in an 1850 Punch. There's a full account of the controversy and enquiry in A Foreign and Wicked Institution? (The Campaign Against Convents in Victorian England, Rene Kollar, 2014, pages 131-144).

Pusey himself was impressed with the community, contributing to the funding of Ascot Priory, where he spent a deal of time (for instance, to write sermons). In 1865, he bought Southlands as a house of retirement and rest for Mother Lydia and the Sisters.

This evidently wasn't a sudden whim; he knew the location from a visit three decades before, when he'd been sent on a convalescent holiday to the Isle of Wight ...


On February 25th [1834], Dr. Wootten sent him to the Isle of  Wight, where he remained until the middle of April. They first settled at Ventnor. 'But,' writes Mrs. Pusey, 'the distance from churches, and the difficulty of getting seats, induced us to emigrate.' They exchanged the noise and publicity of the small lodgings at Ventnor for a 'retired house, with five acres of pleasure ground,' belonging to Mr. Johnson, near Niton. The day was chiefly spent in the open air: Pusey delighting in the sea breezes, and his wife reading Silvio Pellico to herself, and Bonwell's life to him, — 'not very admirable, perhaps, as a piece of biography, but his meditations and prayers are strikingly good.'
- page 288, Life of Edward Bouverie Pusey (Henry Parry Liddon, Vol 1, Longman's, Green and Co., 1893, Internet Archive lifeedwardbouve02johngoog). 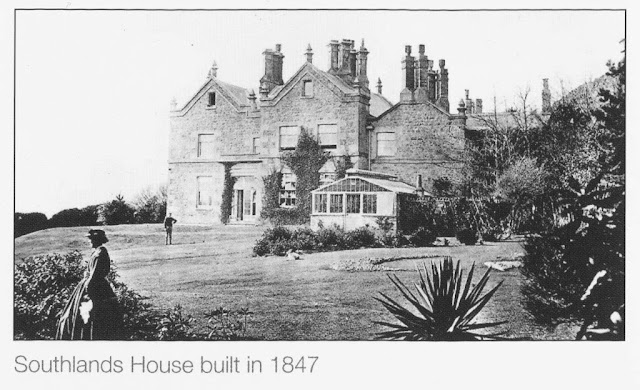 I slightly wonder if Liddon got his chronologies wrong here, as Southlands doesn't appear to have been built until the late 1840s, and Sir Henry Allen Johnson didn't move to the Island until the 1850s. Anyhow, Pusey acquired the house a few years after Johnson's death in 1860.


Dr Pusey bought the property in the autumn of 1865 when Mother Lydia's persistent cough and other signs of a "weakness of the lungs" caused her medical advisers to prescribe "change of air and rest from her ordinary labours at a retired at a retired sea-side watering place". Such a place was Southlands. Here the Sisters and others who came to share the Mother's rest occupied a wooden building adjoining the mansion, called the "Annexe" and "The Sanitarium" and, eventually, "the Foreign Mission House".
- page 237, Priscilla Lydia Sellon: the restorer after three centuries of the religious life in the English church, Thomas Jay Williams, S. P. C. K., 1965

"Vectensis" writes in the Isle of Wight County Press of Apr 6 1963 that "At the side of Southlands there was a large wooden building used as a sanatorium. Being empty for many years, the doors, windows, etc., went to make up for deficiencies in other buildings". I originally thought that this "Annexe" could the prominent foreground building in image #1766 (Blackgang Chine, circa 1900 - 1930) at the The Carisbrooke Castle HistoricImages site - but the Blackgang Chine Coast: Disappearing Village exhibit identifies it as the "Original Chine Tearoom, 1880".

It's not clear if "Foreign Mission House" applied just to that annexe or to Southlands itself, but the name arose in relation to the Society of the Holy Trinity's mission work in the Pacific. In 1867 Mother Lydia herself had visited Hawaii (then called the Sandwich Islands) and founded a school and priory with the express permission of Queen Emma. Furthermore, some Sisters stayed to teach, and arrangements were made to bring the daughters of some high-ranking families to England for education - see see pages 230ff, Emma: Hawaii's Remarkable Queen (George S. Kanahele, University of Hawaii Press, 1999). This explains the reference in the Isle of Wight Observer in 1870:


We understand that the Rev. Dr. Pusey is about the leave the Isle of Wight, and that his residence is to be sold. The original name of the property was Southlands, but when Dr. Pusey purchased it he called it the Foreign Mission House. It has been occupied for some years by the Lady Superior, several Sisters of Mercy, the young Princess Polama [sic], and two daughters of chiefs from the Sandwich Islands, the rev. doctor coming down when  his duties at Oxford would allow.
- Blackgang, Isle of Wight Observer (Ryde, England), Saturday, May 21, 1870; pg. 5

An 1869 issue of Mission Life has a creepily rosy account of the arrangement:


THE HAWAIIAN MISSION.
SOME ACCOUNT OF FOUR LITTLE NATIVE GIRLS OF THE SANDWICH ISLANDS, NOW IN ENGLAND
It is not usually known that when Miss Sellon returned, in 1865, from Honolulu, after establishing two institutions for female education, under the Sisters of Mercy at that city, and Lahaina, she brought with her to this country, with the consent and even to the delight of their parents, several little Hawaiian girls. At present they are in the Isle of Wight, in one of that lady's institutions. The climate of that island seems to agree with them, and hitherto they have been exempt from any physical disabilities. They are all under eleven years of age, of the genuine Polynesian colour, nothing of the negro type about them of course—large full eyes, long black hair, and a bright, loving expression. Happier faces we never saw. Affectionate, docile, gentle, sweet-tempered, their mental capabilities are good, while they are not only quick in apprehension, but with a taste for learning. The youngest, Palemo, was only two years old when she was brought to England by Queen Emma, in 1865, at the request of that benevolent lady, under whose care she has ever since been. When afterwards Miss Sellon visited the islands, she most thoughtfully took this little girl in her suite, for the sake of showing her friends how greatly she had improved in England, and to prevent the extinction of those natural feelings towards her relatives, which it was so desirable and right to maintain, though in a foreign land. This little girl then came back with her adopted mother—one who had truly merited that endearing title—but with three little companions to share with her the same privileges of England. Palemo's paternal uncle, Kamakau, is one of the House of Nobles, a man of some cultivation, one of the judges of the islands, and capable to speak with power and eloquence in the House of Assembly, while her father possessed some hereditary office at the king's court. He died the year after his little girl left him, having been a consistent confirmed communicant of the Reformed Catholic Church since its establishment. Palemo, we should add, is goddaughter of Halakana, a high chief of royal blood, and Queen Emma, who takes a most warm and kindly interest in her welfare.
- Mission Life, July 1, 1869 (read full article for details of the others)

The reality was that Palemo wasn't a good learner. Maria Trench's The Story of Dr. Pusey's Life (1900) describes her as


A little Hawaiian girl, who was often with Dr. Pusey, and to whom he was much attached. He used to lead her pony about in the Isle of Wight. He tried in vain to teach her to read.

She was, also, probably already seriously ill at the time the Mission Life account was written, and died at 9 ...


The child's health began to break under the rigour of the English winters as early as 1870. She died in mid-March 1872, in Dr Pusey's house in Tom Quad, Christ Church. "Palemo has gone to Jesus whom she loved and longed to see", Dr. Pusey wrote soon after.
-  page 280, Williams, ibid.

... and only one of the girls survived and got home from this exchange visit from hell.


... these little Hawaiians brought to Ascot in 1865, and others who came in 1867, strongly appealed to Dr. Pusey's affection and sympathy, particularly little Palemo Kekeekaakapu, the fiery-spirited grand-daughter of a warrior chieftainess who led her forces against the enemy on horseback, and gentle Manoanoa Rose Shaw, both in due course received as Child Oblates of the Love of Jesus, both early victims of la maladie des élus, both laid to rest in the Sisters' cemetery at Ascot. Only one of these children returned to Hawaii, Keomailani Lily Shaw, sister of Manoanoa, who after her return to Honolulu was married to Mr. Wray Taylor, organist of St. Andrew's Cathedral.
-  page 244, Williams, ibid.

I'm not clear what la maladie des élus means, but considering the girls had spent time with Mother Lydia, who had a persistent cough that had caused "several haemorrhages of the lungs" (Williams, ibid. p.280), we might guess tuberculosis. The Flickr photos by Webrarian have a series of Pusey-related images, including ones of the graves of Palemo and Manoanoa at Ascot Priory.