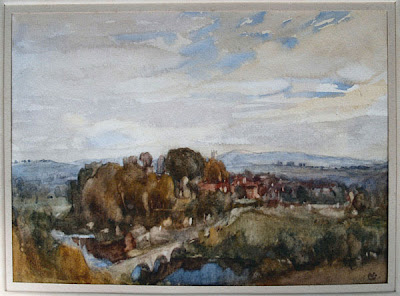 An interesting detection project today. I just ran into the above small watercolour. I couldn't resist buying it; although recognisably a landscape, it has a surreal edge to it, as if the scenery contains half-seen mammoths and other beasts at a water-hole. It being in a Topsham shop, I first thought it might be Countess Wear, but an inscription on the back of the frame says Ludlow - to John and Wins - in remembrance of "Uncle Vokes". That rapidly placed it as Dinham, Ludlow. As you can see from this image at old-picture.com, it's Ludlow looking from Whitcliffe over Dinham Bridge and Dinham Weir.

The odd thing, given that it's such a picturesque view, is that I can't find any modern shots from exactly the same viewpoint. Maybe it's overgrown and inaccessible now?

Googling artists called Vokes rapidly found a likely ID for "Uncle Vokes": Arthur Ernest Vokes (1874-1964). It's rather getting to the limit of what can be found online, but it appears he specialised in monogrammed watercolours of British natural scenes: the 1927 edition of Who's Who in Art says he was a portrait and landscape painter, and sculptor in bronze. He went to Leeds Grammar School, along with his brother Sidney Benson Vokes (both were sons of JB Vokes of Leeds - see the register); and in the early 1900s both lived in Northampton. He produced a book: Tree-worshipper in watercolours: 60 years of painting by Arthur Ernest Vokes.