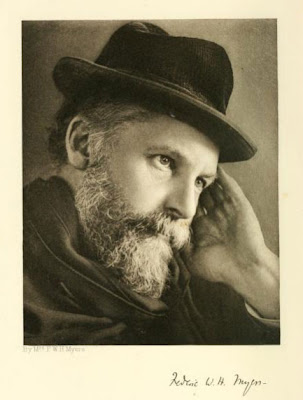 Portrait, platinum print by Eveleen Myers, from frontispiece to Fragments of Prose & Poetry, 1904

On Thursday 8th October, 2009,  I went to the launch at Joel Segal Books of the above biography.

From the press release:

This is the first full-length biography of Frederic WH Myers, unjustly neglected Victorian classicist, poet and psychologist, whose systematic and pioneering exploration of nineteenth century spiritualism, mesmerism and related phenomen convinced him of the reality of life after death.

Myers was a friend or acquiantance of Balfour, Browning, Conan Doyle, George Eliot, Prince Leopold, Sidgwick, Stevenson, Swinburne, Tennyon, William and Henry James, and other "Eminent Victorians". His wife, Eveleen, was a wealthy society beauty (painted by Watts and Millais) and an outstanding photographer whose photographs are now in the National Portrait Gallery.

"FWH Myers ... a man of various and remarkable gifts ... yet no full biography of him has hitherto been written ... Altogether a fascinating read!"
- Alan Gould, author, The Founders of Psychical Research

"Frederic Myers was one of the great pioneers in the scientific exploration of consciousness ... In this well-researched book, Trevor Hamilton sheds new light on his life and shows how Myers' work was embedded in the rich social and intellectual life of late nineteenth-century Britain. I read it with great interest".
- Rupert Sheldrake

"With his objective and unsensational approach, Trevor Hamilton provides a valuable new insight into the early days of organized ghost hunting .... the rivalries and deceptions, the scandals and contoversies, the great mediums and researchers of the time."
- Geoff Ward, Western Daily Press


For a quick overview of the subject, see Frederic William Henry Myers at Wikipedia. The Internet Archive has Arthur Christopher Benson's The leaves of the tree; studies in biography (1911), which has a 33-page biography, and Myers' own Lectures on Great Men (1856), Human Personality And Its Survival Of Bodily Death (Volume I and Volume II) and Fragments of prose & poetry (1904 - posthumously compiled by his wife). A few more can be previewed via Google Books.

Also check out the National Portrait Gallery - Eveleen Myers (née Tennant) (1856-1937), Photographer - for Eveleen Myers' work (really do check it out - her portrait photography in particular is superb). From the NPG: "Eveleen and her sister Dorothy, who later married the explorer Henry Morton Stanley, were painted by George Frederic Watts and John Everett Millais. Both sisters played an active role in the salon their mother established in the early 1870s at which they entertained political figures, artists and intellectuals of the day".