I've just been reading the concordance to Lovelace and Babbage Vs The Client Pt 3, the latest episode of Sydney Padua's Babbage and Lovelace cartoon adventure (see To the Difference Engine! previously). Sydney's description of Babbage's 1864 Passages from the life of a philosopher as a "comic masterpiece of an autobiography" is well confirmed in this strange chapter, A Vision, which tells an anecdote whose punchline is a chart of figures. Babbage's story tells how he falls asleep in Salisbury Cathedral and channels the spirit of a cheese mite, learning about cheese mite cosmology.

Spending a few days at Salisbury, I had wandered into the cathedral, and being much fatigued, had selected the luxurious pew of the Dean as a place of temporary rest. Reposing on elastic cushions, with my head resting on an eider-down pillow, the vision I have related had taken place.

On removing the pillow I observed a small piece of matter beneath it. This, upon examination, turned out to be a morsel of decayed Gloucester cheese. The whole vision was now very clearly explained. The verger had evidently retired to the most commodious pew to eat his dinner, and had inadvertently left the small bit of cheese upon the very spot I had selected for my temporary repose. It was clear that my Spirit had been put en rapport with the soul of a mite, one of the most cultivated of his race. 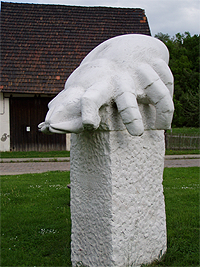 With modern aseptic packaging of most cheese, along with refrigeration, cheese mites have been more or less relegated to specialist cheeses such as Mimolette and Milbenkäse (see the cheese mite memorial, Würchwitz, left). However, prior to maybe 50 years ago, they were a pretty well universal sight to anyone who ate cheese, so it's not surprising that references to them should turn up in culture and literature. They were the subject of the first public science documentary film, shown at London's Alhambra Music Hall in 1903 - see Cheese mites and other wonders - and, as a long-standing metaphor, in the title of earlier film Cheese Mites or, Lilliputians in a London Restaurant (1901).

I first ran into them via this poem.

The cheese-mites asked how the cheese got there,
And warmly debated the matter;
The Orthodox said that it came from the air,
And the Heretics said from the platter.
They argued it long and they argued it strong,
And I hear they are arguing now;
But of all the choice spirits who lived in the cheese,
Not one of them thought of a cow.


The first four lines of the above poem have had wide circulation on the comic and curious verse circuit, often credited as "Anon" - I first saw it in Arnold Silcock's Verse and Worse - but I was surprised to find the full version to be by Conan Doyle. It first turns up in prose form in his epistolary novel The Stark Munro Letters:

Cullingworth has written a parable which makes a paragraph for our wonderful new weekly paper.

"The little cheese mites held debate," he says, "as to who made the cheese. Some thought that they had no data to go upon, and some that it had come together by a solidification of vapour, or by the centrifugal attraction of atoms. A few surmised that the platter might have something to do with it; but the wisest of them could not deduce the existence of a cow."

We are at one, he and I, in thinking that the infinite is beyond our perception.


Conan Doyle must have had cheese mites on his mind a lot, as they turn up in another poem in Songs of Action.

And the doctor says the reason why I sit an' cough an wheeze
Is all along o' varmint, like the cheese-mites in the cheese;
The smallest kind o' varmint, but varmint all the same,
Microscopes or somethin'--I forget the varmints' name.

- from "The Dying Whip", Songs of Action


Many writers seem to have been similarly taken with cheese mites; Verse and Worse also has this one, which tracks to Benjamin Franklin's Poor Richard's Almanack (the poem's not necessarily by Franklin):

Jack, eating rotten cheese, did say,
Like Samson I my thousands slay;
I vow, quoth Roger, so you do,
And with the self-same weapon, too


As a microcosm of the world and metaphor for the human condition, cheese-mites have rich literary connections. Their cosmology and philosophy was even the subject of a whole verse treatise, The chronicle of mites: a satire politico-philosophico-theological and other pieces (James Aitchison, 1887). Aitchison was Minister of Erskine Church, Falkirk, and otherwise wrote predictably dour theological expositions. A pity I can't find his mites poem online, but Wilde's lukewarm review suggests it wasn't up to much.

The Chronicle of Mites is a mock-heroic poem about the inhabitants of a decaying cheese who speculate about the origin of their species and hold learned discussions upon the meaning of evolution and the Gospel according to Darwin. This cheese-epic is a rather unsavoury production and the style is at times so monstrous and so realistic that the author should be called the Gorgon-Zola of literature.
- Oscar Wilde, Pall Mall Gazette, February 15, 1888


I like to think the whole idea - expressed both by Conan Doyle and Aitchison - tracks back to Babbage.

Just for a taster, cheese-mite metaphors and similes turn up variously: in literary criticism, as in Theodore Watts-Dunton: Poet, Novelist, Critic, by James Douglas; in political writings such as James Fitzjames Stephen's 1882 Liberty, Equality, Fraternity, and John Stuart Mill's response to it in his On Liberty; in Shakespeare's All's Well that Ends Well; in Daniel Defoe's A Tour through the Whole Island of Great Britain; in Washington Irving's Bracebridge Hall; in Tennant's Anster Fair; in the essays of Schopenhauer; in William Cowper's derogatory description of Margate; in Thomas Hardy's The Dynasts; in Le Fanu's Ghost Stories of Chapelizod; in an epigram in Eden Philpotts' 1921 sword & sandal novel Eudocia; in Galsworthy's The Forsyte Saga; in Herman Knickerbocker Viele's On the Lightship; in Wilfred Owen's A Terre; in ER Eddison's 1922 fantasy The Worm Ouroboros; and as an instructional analogy in science texts.

If we could place humanity under a microscope we should see, I think, very much what we do actually see when we place a particle of ripe cheese beneath its lenses, namely, a substance alive with millions of animated specks of matter engaged in restless and apparently purposeless activity.
- The Geographical Journal, volume 64, 1924


Probably the strangest of the batch is Occult Chemistry: Investigations by Clairvoyant Magnification Into the Structure of the Atoms of the Periodic Table and Some Compounds (Charles Webster Leadbeater, Annie Wood Besant): an attempt to use clairvoyance as a kind of particle physics tool. Leadbeater gives a flaky explanation of how vaccination works, in terms of it activating some cheese-mite-like universal antibody, "a kind of etheric amoeba in the atmosphere".

Also on the weird science front, cheese mites crop up in the story of Andrew Crosse ("The Electrician", "Wizard of the Quantocks", and quite probably the prototype for Frankenstein) who controversially in 1836 reported having created insects, Acarus crossii, by slow electrolysis of water with mineral electrodes (see pages 310-314, Journal of the Franklin Institute, Volume 19, 1837). This wasn't dismissed out of hand; several researchers attempted to reproduce the results, and failed, The ultimate view, then and now, was that his apparatus had been contaminated by cheese mites or dust mites. Crosse was, by the way, a friend of Charles Babbage, which brings us full circle.