Upgraded from out-takes: Researcher uncovers secrets of Kells 'angels'. This PhysOrg piece summarises Cisne J L, 2009, "Stereoscopic comparison as the long-lost secret to microscopically detailed illumination like the Book of Kells’" Perception 38(7) 1087 – 1103, whch postulates a simple stereo-viewing trick as the means for drawing the detailed illuminations in the famous Book of Kells transcribed by Celtic monks around 800CE. The abstract:

The idea that the seventh- and eighth-century illuminators of the finest few Insular manuscripts had a working knowledge of stereoscopic images (otherwise an eighteenth- and nineteenth-century discovery) helps explain how they could create singularly intricate, microscopically detailed designs at least five centuries before the earliest known artificial lenses of even spectacle quality. An important clue to this long-standing problem is that interlace patterns drawn largely freehand in lines spaced as closely as several per millimeter repeat so exactly across whole pages that repetitions can be free-fused to form microscopically detailed stereoscopic images whose relief in some instances indicates precision unsurpassed in astronomical instruments until the Renaissance. Spacings between repetitions commonly harmonize closely enough with normal interpupillary distances that copying disparities can be magnified tens of times in the stereoscopic relief of the images. The proposed explanation: to copy a design, create a pattern, or perfect a design’s template, the finest illuminators worked by successive approximation, using their presumably unaided eyes first as a camera lucida to fill a measured grid with multiple copies from a design, and then as a stereocomparator to detect and minimize disparities between repetitions by minimizing the relief of stereoscopic images, in the manner of a Howard–Dolman stereoacuity test done in reverse.

The Book of Kells, which lives at the Old Library, Trinity College Dublin, is iconic both as Christian and Celtic art, and central to the Celtic revival; there are plenty of images online, and many nice books with facsimiles (at the bookshop, for instance, we have a copy of the 1914 The Book of Kells / described by Sir E.Sullivan, and illus. with twenty-four plates in colours). But despite the exposure, the techniques to produce it are still an enigma. As the PhysOrg intro says:

The Book of Kells and similarly illustrated manuscripts of seventh- and eighth-century England and Ireland are known for their entrancingly intricate artwork -- geometric designs so precise that in some places they contain lines less than half a millimeter apart and nearly perfectly reproduced in repeating patterns -- leading a later scholar to call them "works not of men, but of angels".

The phrase comes from the Welsh historian Giraldus Cambrensis, referring in the 12th century to the now-lost Book of Kildare:

Fine craftsmanship is all about you, but you might not notice it. Look more keenly at it and you will penetrate to the very shrine of art. You will make out intricacies, so delicate and subtle, so exact and compact, so full of knots and links, with colours so fresh and vivid that you might say that all this was the work of an angel and not of a man.

I've often suspected that strongly myopic artists must have played a part. I've moderate short sight (I need -8.00D glasses) and find this gives a very useful "hi mag"mode for looking at things about 12cm away, enough for sub-millimetre detail such as halftone rosettes. I'm sure someone worse affected could manage the resolution of the Kells artwork. But Cisne's paper also notes that the Book of Kells shows this kind of resolution between duplicates of the same design, suggesting some means of visual comparison with a template. The mechanism is essentially that used when viewing random dot stereograms.

But precision aside, even at manageable size the complexity of Book of Kells designs is quite baffling, particularly the interlacings of Celtic knotwork. One handy fact - while I don't pretend to understand knot theory - is that some of it is self-working. If you draw a continuous loop, following it and assigning a simple over-under alternation at each crossing automatically assigns consistent interlacing (a feature known across multiple cultures). Forgive the crudeness of this diagram:

While I think that's pretty cool theory, the practice to produce aesthetically good designs requires astonishing powers of draughtsmanship, and the key and classic book is George Bain's Celtic Art: The Methods of Construction, originally published in 1951 to not much acclaim, but reissued in 1971 to become central to the revival of Celtic artwork. See Celtic Interlace; An Overview (Stephen Walker, orig. in Dalriada Magazine). Bain's contribution was to document Celtic art from standing stones and other artefacts, and reinvent low-tech humanly feasible algorithms for drawing them and creating original designs. 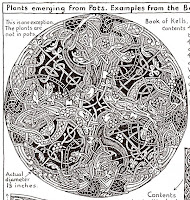 The above images show Bain's reconstruction and the original of a roundel featuring stylised and interlaced birds, beasts and plants from The Book of Kells, Folio 188r, Incipit to the Gospel of Luke. "Quoniam quidem multi" (see full page at Wikimedia Commons). The actual roundel is just one-and-a-third inches across. 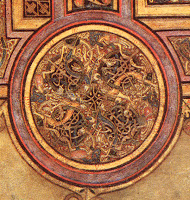 For a bit about Bain himself, see Groam House Museum and George Bain - A Highland Homecoming.I'm sorry to say that he comes across as a somewhat irritating presence in the book. Quite apart from his evident dislike of the modern art of his time, his commentary has a rather tiresome tone, not uncommon with autodidacts with off-the-wall theories, to the effect that everyone else is closed-minded, especially those who acquired knowledge through academic routes

... By minds already stored with information, whether it be acquired by instruction of others or by dint of personal application, prospective books will frequently be rejected. What has been diligently attained is too often assiduously hoarded; and pride and envy co-operate with avarice to render the process of knowledge difficult and expensive
- Anonymous 1795 1

... holders of Art College diplomas ... resenting the introduction of the study of a form of Art of which they knew nothing...

The two above examples show the gross travesties of Pictish Art in Publications by supposed authorities that have been for the past fifty years the only source of information for Students and others in the libraries of every university and centre of art education in the civilised world.

... writers who have been blinded by the "classical" education that still claims to be the basis of all European artistic achievements,

Maybe he's right, but parading the gripe in his book doesn't do him credit as a person. I can't over-emphasise, however, his skill as an artist and draughtsman, and the remarkable body of design techniques he devised. After his death in 1945, his work was continued by his son Iain Bain, a civil engineer who revised his father's techniques to simplify areas dependent on intuition, and published books including Celtic Knotwork and Celtic Key Patterns.

To Bain, by the way, we owe every Celtic knotwork tattoo you've ever seen (many are ripped off straight out of his book).

1. Any ideas on source? It's a distinctive quote, but Google Books finds no sign of it. I suspect Bain made it up.

Addendum For those who can fuse crossed-eye stereopairs, here's one I prepared earlier. Click to enlarge, as usual. 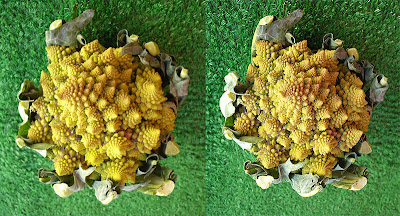