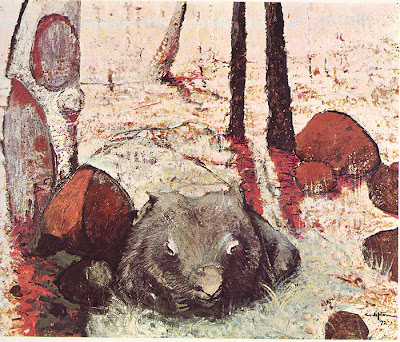 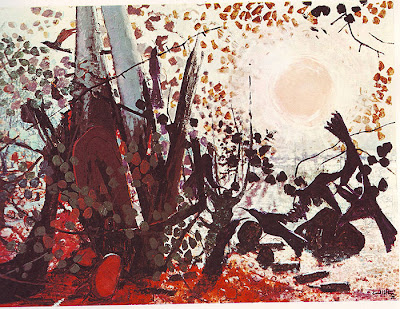 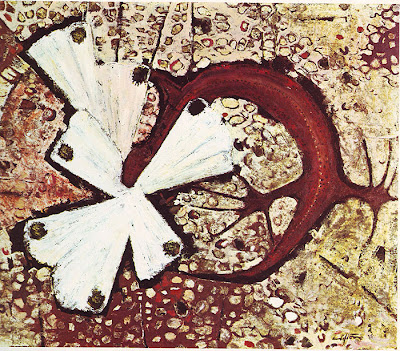 From top: Summer of a wombat, The day's thinking begins, Lizard and butterfly

We just got in an interesting large-format art paperback, The Death of a Wombat (Ivan Smith ; with paintings etchings and line drawings by Clifton Pugh, various editions, orig. 1972). Originally a 1959 radio broadcast - see Music Australia - it focuses on the experiences of a wombat during a bushfire caused by a discarded bottle focusing the sunlight. The narration, backed by the Sydney Symphony, won multiple awards including the Prix Italia. It's very much of its time. A sample:

The wombat comes from a pleasant family, fussy and gentle, slowminded, and polite. He is a close cousin of the koala bear, who took to the trees a long time back to get away from it all. The wombat has a short snub-nose and short, stubbed legs and a short-range mental life. He is a ponderous plump of meat with a lurching walk.


The wombat gets caught up in the fire, and is badly burned, but:

He makes the miracle of reaching the river.
Slowly he slides
under water
...
The wombat moves to a soft death now. His fat, charred rump bobs slowly above the water as he drowns. The last thing that he dimly knows is the gentle easing of his terrible burns. A gesture, perhaps, to the friend of all the bush, to the meekness of waddle and crump?


Probably it's more impressive with the music, but I find the text - despite generally enthusiastic reviews to the effect that the anthropomorphism is excusable because it's allegorical - a horrible mixture of the very dark with the repulsively twee. The artwork, however, is amazing: Clifton Pugh produced a cycle of seventeen oil paintings (some realistic, some abstract) and over 50 etchings and line drawings for the story. Three are shown above.

"Wombat poetry is a genre, but not as we know it"
- Arts and minds, Gregory Currie

"The Wombat is a Joy, a Triumph, a Delight, a Madness!"
- Dante Gabriel Rossetti


Death of a Wombat naturally reminded me of Dante Gabriel Rossetti's drawing Death of a Wombat, which I mentioned a few months ago - see Bad luck with gazelles - along with its parody of Thomas Moore's Lalla Rookh

I never reared a young Wombat
To glad me with his pin-hole eye,
But when he most was sweet & fat
And tail-less; he was sure to die!


However, I didn't explore in detail the National Library of Australia lecture transcript, Rossetti's Wombat: A Pre-Raphaelite Obsession in Victorian England, which goes into how obsessed the Pre-Raphs were with wombats, DG Rossetti in particular even keeping two, and swapping wombat poems with his sister (see Wombat Poetry and Art by the Rossetti Family).

Oh! How the family affections combat
Within this heart; and each hour flings a bomb at
My burning soul; neither from owl nor from bat
Can peace be gained, until I clasp my wombat!
- Dante Gabriel Rossetti


One even turns up in another of her poems.

...
Curious Laura chose to linger
Wondering at each merchant man.
One had a cat's face,
One whisked a tail,
One tramped at a rat's pace,
One crawled like a snail,
One like a wombat prowled obtuse and furry,
One like a ratel tumbled hurry skurry.
...
- Christina Rossetti, "Goblin Market"


Rosetti's Wombat goes into a deal of the personal background, as does Poetical remains: poets' graves, bodies, and books in the nineteenth century (Samantha Matthews, Oxford University Press, 2004). Lordy! I'm not sure I've ever seen such overanalysis of a fairly light poem as in the latter. For more detail on the wider culture, it looks worth finding The Year of the Wombat: England, 1857 (Francis Watson, Gollancz, 1974).

The New Zealand born poet Douglas Alexander Stewart took a more serious look at the wombat in its own habitat ...

Ha there! old-pig, old bear, old bristly and gingery
Wombat out of the red earth peering gingerly,
Was there some thud of foot in the midst and the silence
That stiffens whisker and ear in sounds’ fierce absence.
Some smell means man!
I see the dewdrop trembling upon the rushes,
All else is the mist's now, river and rocks and ridges.
Poor lump of movable clay, snuffling and blinking,
Too thick in the head to know what thumps in your thinking,
Rears in the rain-
Be easy, old tree-root’s companion; down there where your burrow
Dips in its yellow shadow, deep in the hollow,
We have one mother, good brother; it is Her laughter
That sends you now snorting and plunging like red flood-
water
To earth again.


... and this one explores a biological quirk of the wombat (its cube-shaped droppings, evolved apparently as territorial markers that won't roll away from where they're deposited):

As you splash along the track
Eyes alert and ears pinned back
You might have seen those queer square turds
And thought, if not expressed in words

The stress of such a defecation
Baffles ones' imagination
But it's not done to entertain us -
The Wombat has an oblong anus.

So if your slumber is disturbed
By cries and screams, don't be perturbed.
Eyes closed, teeth clenched and racked with pain
A Wombat's gone and crapped again!!


... but generally wombats get fairly lightweight roles in literature

The wombat lives across the seas,
Among the far Antipodes.
He may exist on nuts and berries,
Or then again, on missionaries;
His distant habitat precludes
Conclusive knowledge of his moods,
But I would not engage the wombat
In any form of mortal combat.
- Ogden Nash


Nash is correct; despite the bumbling appearance and generally phlegmatic nature, wombats have strong claws and a solid bite. They're heavy enough to knock a human over, and can crush the skull of a predator by barging it against a tree or the roof of the wombat's tunnel. This doesn't stop them starring in any number of children's books, but in the classic prototype of this genre, the wombat is far from cuddly.

In 1918, Norman Lindsay - on whom more later - wrote and illustrated The Magic Pudding (in full The Magic Pudding: Being The Adventures of Bunyip Bluegum and his friends Bill Barnacle and Sam Sawnoff). Origin stories vary. According to the National Library of Australia:

Written as a distraction from the horrors of World War 1 and his brother’s death on the Somme, he thought it held him back as a serious writer. The story arose out a professional disagreement Lindsay had with fellow writer, Bertram Stevens, who thought that fairies were the most popular subject for a children’s story. Lindsay believed it was food. The pudding won.


Elsewhere I've seen it stated that Lindsay had a more serious purpose: to create a children's story with a truly indigenous Australian mythos. Either way, it's brilliant: Philip Pullman calls it "the funniest children's book ever" (see his Salon.com review). The hero is a koala, and the baddie is the miserable and greedy Watkin Wombat. You can even guess his species. There are two types of wombat: the common wombat, which has a rodent-like face; and the hairy-nosed wombat, which is more dog-like. Watkin Wombat is definitely the latter. There's a text-only version of The Magic Pudding at Project Gutenberg (EText-No. 4910), and selected illustrations at the National Library of Australia.

Addendum 2: it looks as if Death of a Wombat will be repeated on ABC Radio National's Airplay progamme to mark the 50th anniversary of its broadcast: see Airplay, 15th October 2009.

Addendum 3: To celebrate Australia Day, 2011, BibliOdyssey has some nice images from Ruth Park's The Adventures of the Muddle-headed Wombat. See Wombat Tales.