This evening I went to the Topjam Session at Topsham Rugby Club, and it was a bit of an anniversary: it's been a year since the beginning of my involvement with the Орфей bayan. This post about a related instrument, the accordina, has a footnote mentioning that I ordered it around January 23rd). Time for reflection on progress ...

It's been, and continues to be, an exciting but pretty difficult experience. Since I'm not learning via any structured grade system, it's hard to describe what level I'm at, but it must be well beyond beginner by now. I've reached the point of having no great qualms about public playing; I'm beginning to tackle more advanced pieces, such as Ástor Piazolla's wonderful Libertango; and people seem genuinely impressed at the performance, and pleased when I turn up with the thing. The latter I think in strong part is down to my choice from the start to play an eclectic repertoire, and not just the stereotypical folk (this evening, for instance, I played Eye of the Tiger and a self-developed Country & Western pastiche of Barwick Green - aka The Archers theme tune).

I have mixed feelings. On the plus side, I've never before felt actively good at playing an instrument, nor practised without feeling it to be a chore, nor felt such a degree of certainty and committment about devoting large chunks of my day to music (hence the bayan tattoo earlier - it has been that much of a milestone). It wouldn't be exaggerating to say I feel a different person - a real musician, a bayanist - compared to a year ago, and it's slowly soaked in that it's quite an achievement to have got there from starting out in mid-life on an unusual and difficult instrument. (Clare deserves a major portion of the credit for putting up with the daily practising).

But at the same time, I tend invariably to feel very flat after performances: disappointed at how they went, whatever the reception. It's "I can play this perfectly at home" syndrome - some flavour of performanced anxiety. It doesn't stop me playing in public, but I still find that any kind of observation (even trying to record a video alone for YouTube) immediately makes me fumble well-rehearsed pieces. I've seen various advice: some advocate plain experience - perform in public until it's no longer anxiety-making - while others suggest more specific practice at "getting in the zone", learning to focus solely on the music and instrument so that the audience ceases to be a distraction. Both, I guess, are worth trying.

I'm also a little concerned about what bad habits I'm getting into from self-teaching, and I'm sure I'd have learned faster with tuition. Then again, I can hardly complain, as it was my decision to go for an instrument that's highly rare in the UK. As I don't want the expense of Skype lessons, I'm getting as much guidance as I can find from accordion/bayan websites and YouTube (the Bayanina Entertainment channel by Nina Tritenichenko is especially good, because her videos show the fingering clearly). Friedrich Lips's book Art of Bayan Playing is on my wish list, though I'm procrastinating about getting it - I think I'm slightly afraid of what I might find I'm doing wrong.

Otherwise, nothing is specifically bothering me except the vast amount of work ahead. For example, the right-hand keyboard has become thoroughly comfortable, but I need to put in left-hand practice on the counterbasses (the keys that, along with the fundamental bass notes, let you play left-hand scales on the Stradella system). And there's the work of building up a repertoire.

I don't know how good it'll be possible to get; as I've said, music for me is part of a generalism, and I'm well aware that I have less basic aptitude and dexterity than any number of musicians for whom music was their central major talent from childhood. I'll never be at Flight of the Bumblebee level. But I'm still progressing, and the experience has been thoroughly rewarding (both in pride at a skill, and the social opportunities it has opened up). I'm happy to see where it goes, and I just need not to get too despondent about the problems. 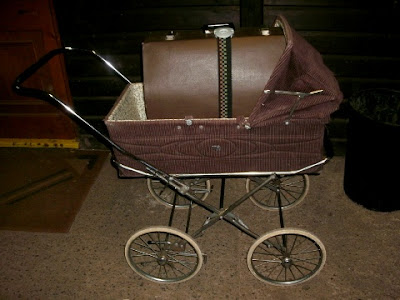 This has been an essential piece of kit, which Martin has nicknamed the RRATD (Ray's Russian Accordion Transportation Device). The Орфей in its case weighs about two stone, and the case has a single suitcase-style carrying handle: it's not something you want to cart the half-mile to the Topsham Rugby Club for the Topjam Sessions. Hence the pram, which, as we don't drive, has been handy for a variety of local ferrying purposes: heavy cats to the vet; glass and cardboard to the recycling skips; materials for Clare's Christmas craft fair to Matthews Hall; the buffet and crockery for my mother-in-law's funeral tea at Grove House; and now this. It probably looks eccentric (they say that the definition of "eccentric" is when you don't realise that it is) - but it works.

I recommend the Topjam Sessions - today's was the fifth - though from past experience, I'm a little cautious of sessions. They can very easily turn into rehearsal space for close-knit pre-existing bands, squeezing out the possibility of spontaneous music-making and bringing new combinations of players together. I'm also very alert to, not to say a little paranoid about, the possibility that playing an unusual instrument might get me sidelined as the resident novelty act - I've encountered this happening to people who play something outside the usual band instruments.  So far, it hasn't been like that - it's been a good crowd of enthusiastic musicians, accepting of a variety of styles and skills (and not ageist). They've been a great encouragement and an incentive to explore new genres, pieces to play, and technical developments (such as singing while playing). However, I hope the organisers are aware of the possible pitfalls; I'll see how it continues. Check out the Facebook page - TOPJAM - if you're a musician in Topsham.