Ptak Science Books just had an interesting quick post - Tech-Quiz 6: A Square Peg in a Round Hole? - concerning an 1885 US patent by one Charles M Dewey of Jersey City, New Jersey, for "a new and Improved Puzzle", which comprises a solution to the puzzle of making an object that will fit three holes of different shapes: square, circular, and cross-shaped.

The "Improved" appears to be an allusion to an older puzzle of similar format. As Dewey puts it: "I am aware that it is old to make a puzzle from a piece of card-board by forming three holes therein, one of which is round, another square, and a third triangular. I do not lay claim to a puzzle thus made".

I first ran into the square/ round / triangular peg puzzle in my childhood in a rather nice book that somehow disappeared during family movings, Robert Morrison Abraham's Tricks and amusements: with coins, cards, string, paper and matches (see page 132). The book actually dates from the 1930s, when it was originally published as Winter Nights' Entertainments: a book of pastimes for everybody, but we had one of a number of later Dover Books paperback imprints.

The idea is, as Dewey says, quite old: for example, it turns up as "The Triple Accommodation" on page 707 of the 1880 The Boy's Own Book by William Clarke (Internet Archive boysownbookbywc00clargoog), and on page 26 as puzzle 16 of the snappily titled Rational amusement for winter evenings, or, A collection of above 200 curious and interesting puzzles and paradoxes relating to arithmetic, geometry, geography, &c: with their solutions, and four plates, designed chiefly for young persons by "John Jackson (private teacher of the mathematics)".

The toy appears in the 1811 catalogue of scientific instrument makers W & S Jones:

The mathematical paradox, a piece of wood of one figure, fits exactly, and passes through a triangular, square, and a circular hole. - £0 2s 6d.
- page 7, An analysis of the principles of natural philosophy, Matthew Young (Bishop of Clonfert), 1811

And earlier still, I found this 1759 variant:

Queſtion 169, by Mr. C. Pagister of Greenland-Dock.
I have a regular Piece of Wood which will fill up a round Hole, a ſquare Hole, and an oval Hole : Query what is the Shape?
N.B. We think proper to propoſe this Question for the Amuſement of our young Philomaths, tho' it is not a new one.
- page 702, Miscellaneous Correspondence, Volume 2, 1759. 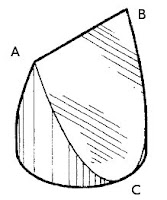 The solution to the basic version is, by now, well-known. You start with a cylinder of unit height and unit diameter, then mark a diameter AB on one end, and a second diameter CD at right angles to this on the other end. Then you cut off two pieces along the planes ABD and ABC. What's left is a plug with circular, triangular and square cross-sections from three orthogonal directions.

There are actually an infinite number of solutions. This Harvard Mathematics Department page - The cork plug -  has nice animations of two: one the planar cut just described, and the other one with a continuously curved surface (the "cork plug" is Martin Gardner's name for the object: Gardner, M. "The Cork Plug." Ch. 5 in The Second Scientific American Book of Puzzles & Diversions: A New Selection. New York: Simon and Schuster, pp. 52-59, 1961).

I don't know whether Dewey ever made anything from his patent for the Improved Version. The puzzle in variants has cropped up various times since. For example, Popular Science Monthly for July 1927 has an article by Arthur L Smith, A Square Peg in a Round Hole, featuring a puzzle similar to Dewey's and a more complex configuration spelling "PSM", and poses the problem of making an object to fit triangular, square, and T-shaped holes. 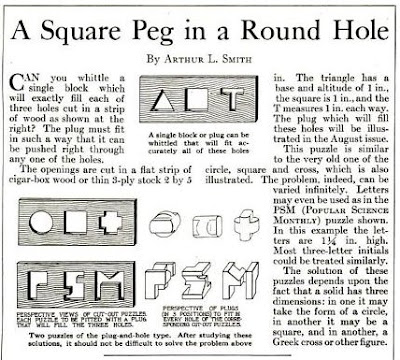 The solution is here in the August 1927 issue.

Following the US patent trail finds many more variants. I don't really know how the patent system works, because in 2002, Joanne Godin for Ideas That Matter got a patent for the probably centuries-old square / circle / triangle format (USD482080).  A nice later variant is the maze toy by Warner A Davis (USD562915) where the plug needs to be manipulated through holes in inaccessible internal partitions of a pyramid. This in turn cites earlier versions: an "educational toy" by Raymond J Scherf (US2542948) that has T-shaped, circular and notched-square holes; James Lloyd Taylor's version with "a space-aged theme" (US3804414), where the plug has to fit round, Saturn-shaped, and star-shaped holes partitioning a box representing space; and Hubert Andrew Johnson Jr's "ornamental design for a child's toy" (USD380240) where the three shapes give access to a hollow cube (directly relating the puzzle to the three orthogonal cross-sections of the object).

I'm sure the format will continue to be developed.