At the risk of boring you with endless pictures of woodlands and cliffs - skip if you've already reached saturation - I have some photos from May 26th, a windy and majorly hot day when we took the fairly short walk from Niton to Blackgang, at the southern tip of the Isle of Wight. The interesting point is that this route follows the accessible end of the old coastal road between them, which was cut by a landslip in 1928 - the other end is the "Lost Road" I described previously - and goes up over the spectacular Gore Cliff above the landslip.

You start by following the main road southward from Niton that descends Barrack Shute - alternatively the Southern Vectis "6" bus will drop you at the foot of it. Then you turn off the main road down a lane running south-west - Sandrock Road - which in turn has a branch prominently signposted Old Blackgang Road. Follow this through the woodland until it just ... stops. 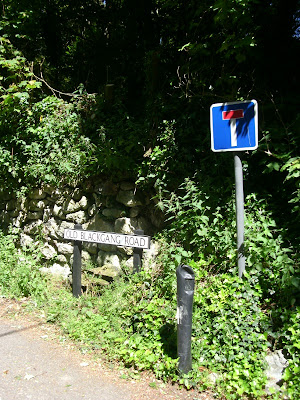 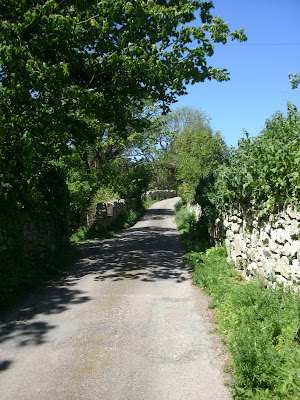 At first it's densely wooded on both sides, but then opens out to give views of the wooded slopes on the landward side, and rolling open pasture on the seaward. There are gates with paths to this pasture, which you might want to follow; because the lane is leading to a viewpoint and parking spot at the end, there is a certain amount of traffic on the road. 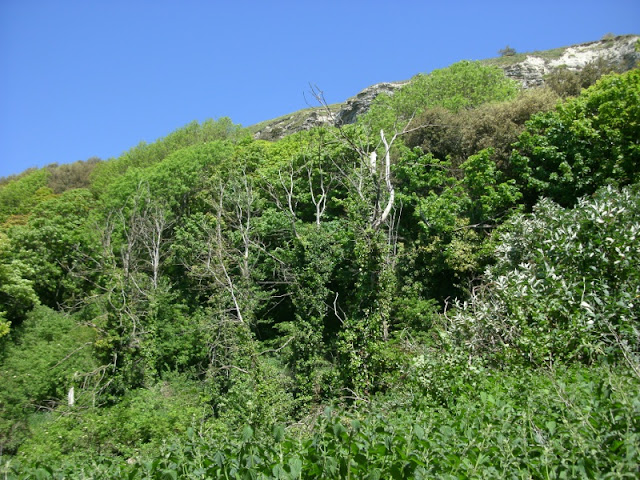 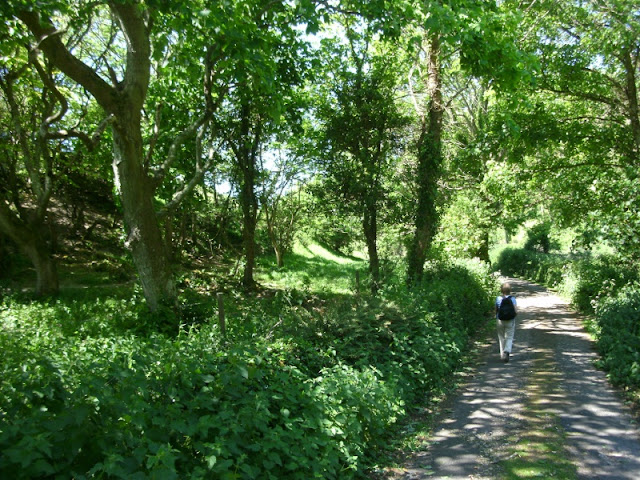 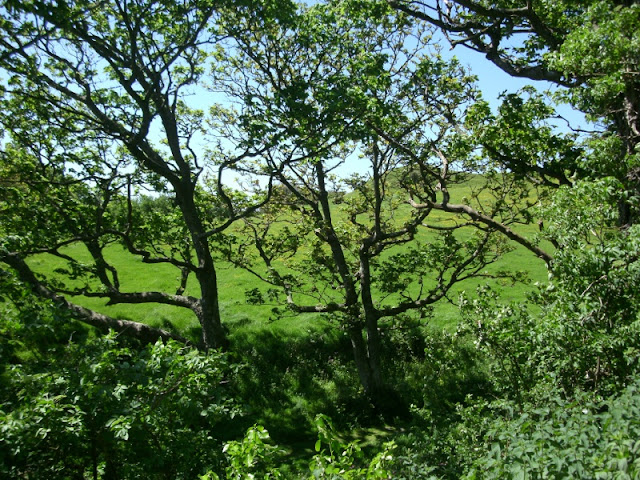 And at the end is the location called Windy Corner, with this spectacular view. 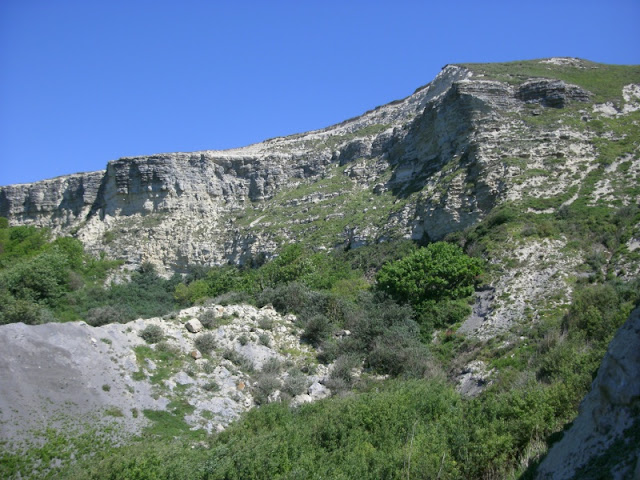 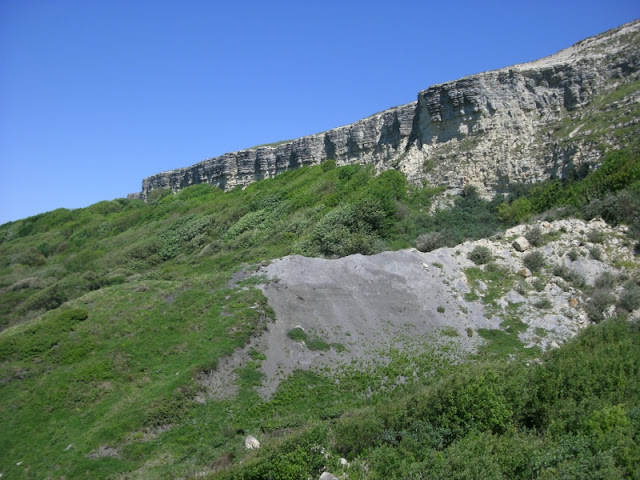 The cliff, capped by overhanging crags of chert-studded Greensand, is called Gore Cliff.  The overgrown slopes are the Undercliff landslip terrain; and the large arc in the cliff, and the ridge of rubble below, are the scene of the 1928 slip that disrupted the road through what is now a wilderness. The isolated segment of road - also disconnected at the other end - is somewhere in all that woodland ahead. And bear in mind that this is on the Undercliff: a ledge some 300 feet above sea level, with Gore Cliff maybe 200 feet more above. 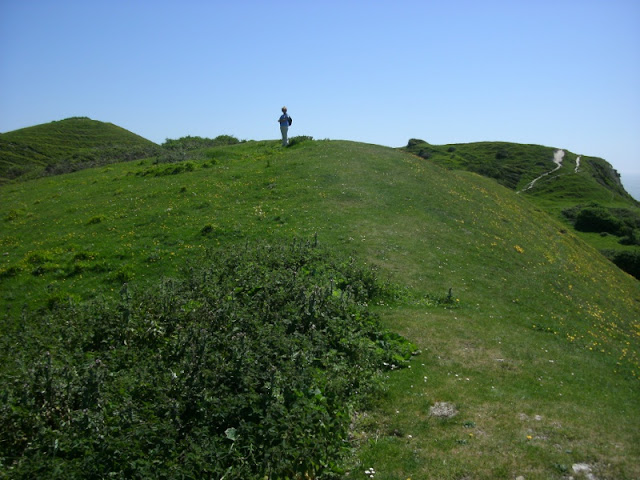 This pastureland, although still a consequence of landslips, is a very gentle contrast to the overgrown tangle immediately adjacent. We didn't go to the beach; it was so hot that 300 feet down and up didn't appeal (apart from which, it's a naturist beach and the etiquette would undoubtedly get complicated).


Instead, we returned along the road part of the way, and around 300 metres along, there's a signpost for a path leading to steps up the cliff.


Below, an image from 2011 of the "Lost Road": the section of this very same road in the section near Blackgang isolated by landslips decades ago and only travelled by determined walkers. It's quite a striking contrast as the 'post-apocalyptic twin' of the photo above. 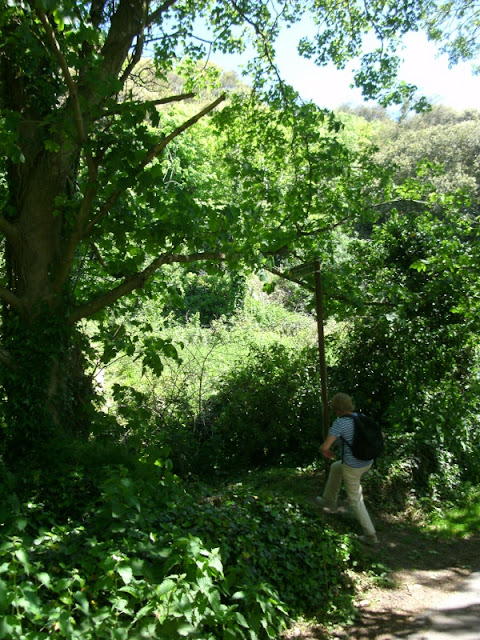 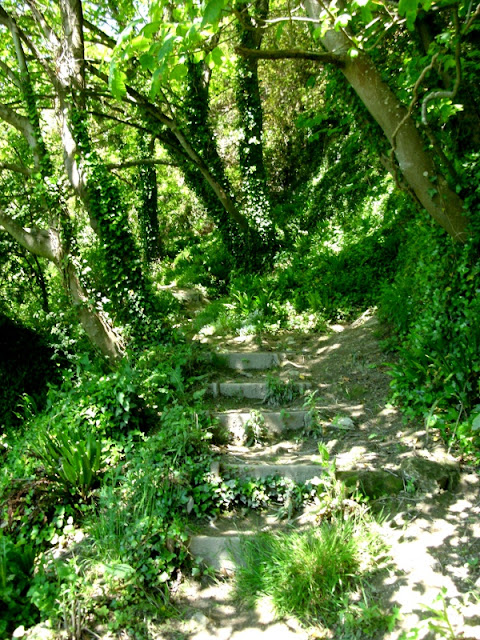 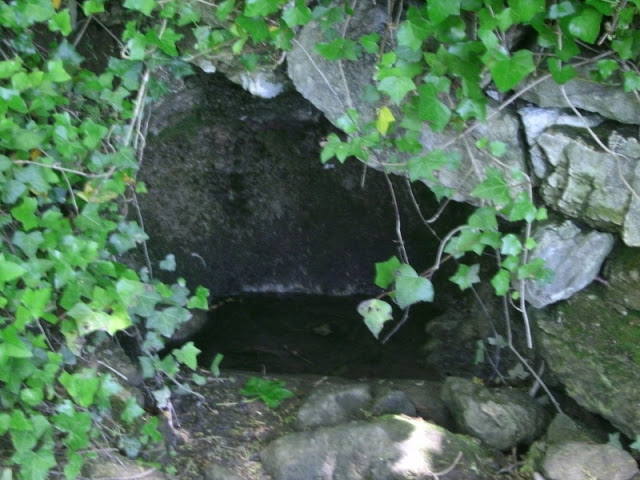 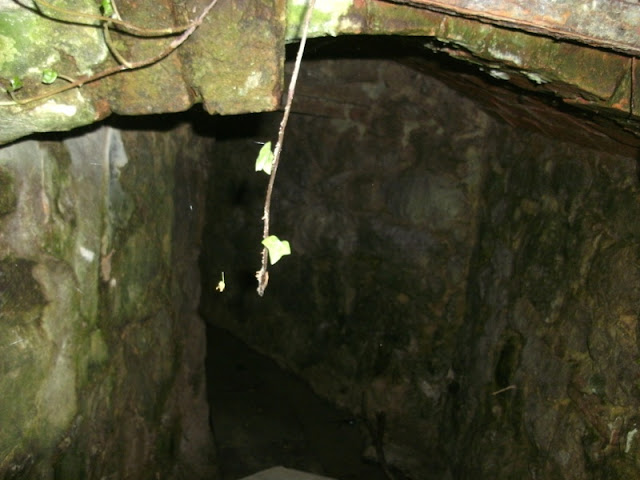 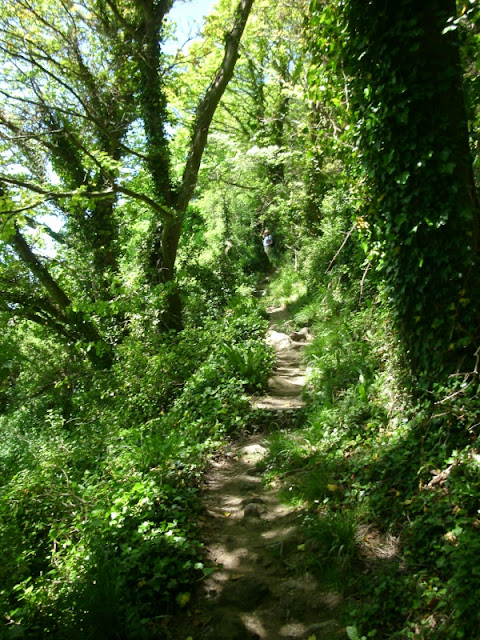 Part-way up was this stone basin and tunnel; I don't know what these are about. The steps carry on up the cliffside until you're high above the Undercliff and you can see St Catherine's Point lighthouse. 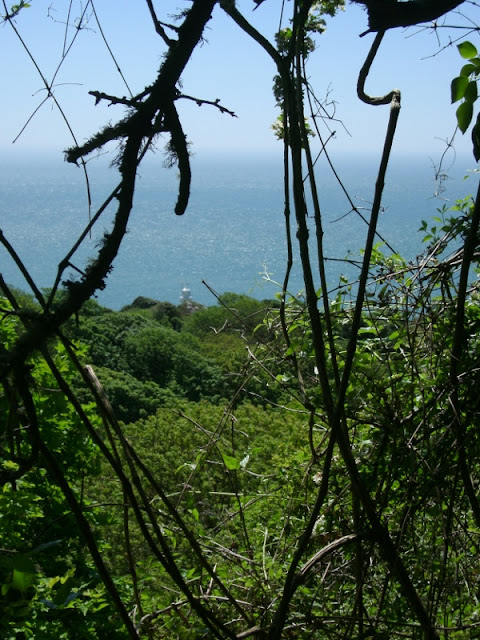 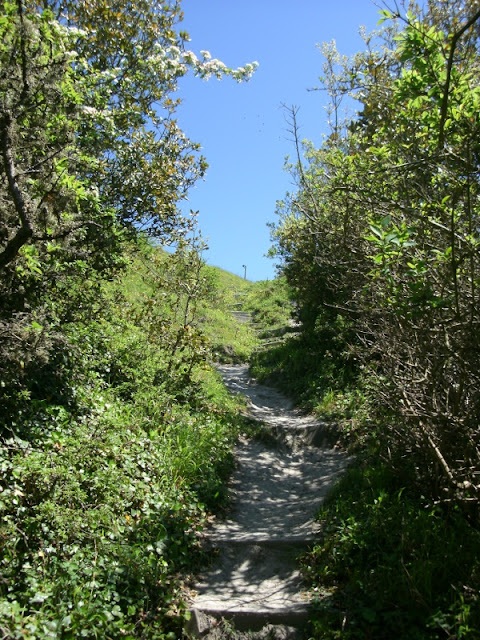 It was stunning, if a little frightening in the stiff wind, at the top of Gore Cliff. The path runs approximately westward, with sheer drop to the left and the St Catherine's Oratory lighthouse ( the "Pepperpot" - the scene of Emma MacAllan's The Children of St Catherine's Chantry) up on the hill to the right. 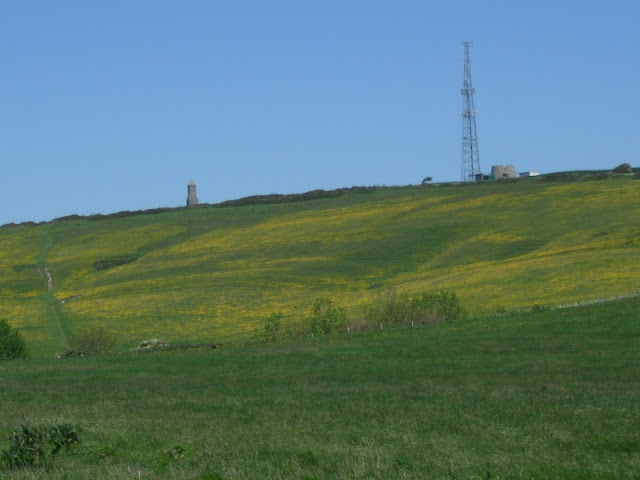 Shortly after, you see the buildings of Blackgang Chine amusement park, and the vista across the whole "Back of the Wight". The path then descends via more steps to the car park and Chine entrance with its well-known giant smuggler. 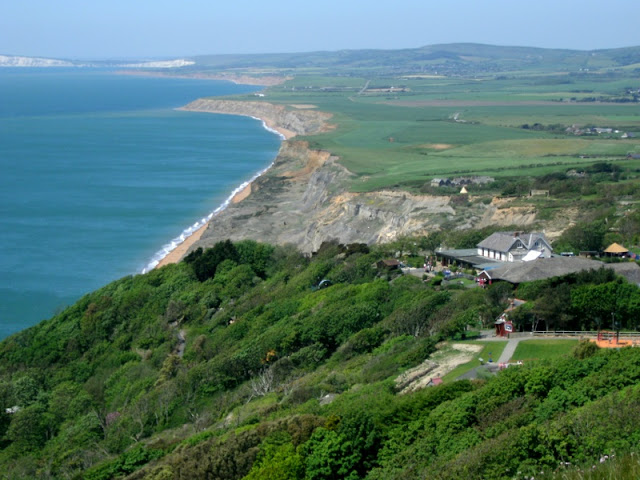 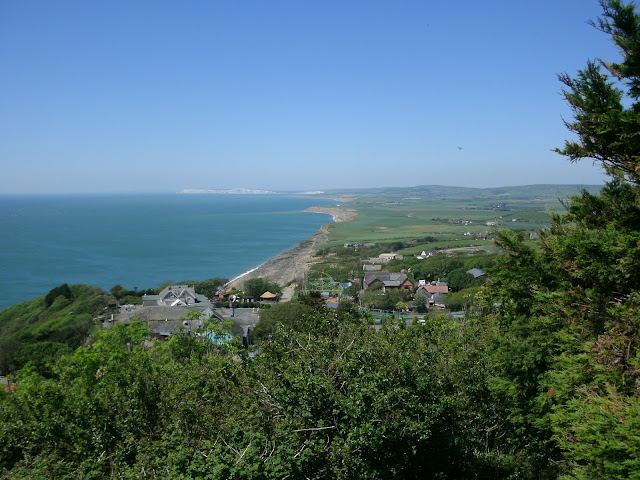 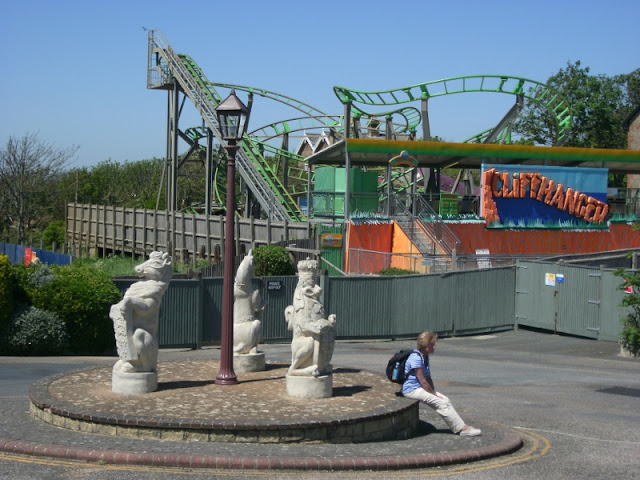 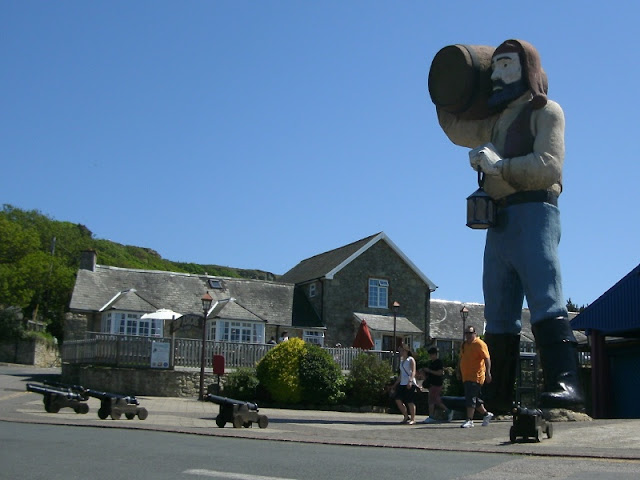