I recommend the Vincent Ward Films site for a remarkable concentration of interesting content.

The Navigator: A Medieval Odyssey is one of my favourite, and seldom-shown, films (see the trailer). It begins with monochrome Boschian scenes in a Cumbrian mining village under threat of the plague in 1348. A boy called Griffin, who is known for his gift of second sight, has a vision that disaster can only be averted if they "Make tribute to God. Place a spire on a distant cathedral. Do so before dawn or the village will be lost". Perhaps in another vision, he joins a characterful group of fellow miners as they tunnel through the earth - to emerge in full colour to culture-shock adventures in modern-day New Zealand. Visually impressive - see production stills - and backed by an eclectic ethnic soundtrack by Davood Tabrizi, it's by turns witty, horrifying and poignant: it rightly won a number of (admittedly esoteric) awards.

And also on the medieval front, there's Alien 3: Unrequited Vision. The third in the Alien series, set on a prison planet, it was watchable enough, but it radically dumbed-down Ward's original concept, as described in David Hughes's 2008 The Greatest Sci-Fi Movies Never Made:


‘It wasn’t a retread kind of sequel it was a completely new idea rich with religious imagery, iconography and metaphor.” 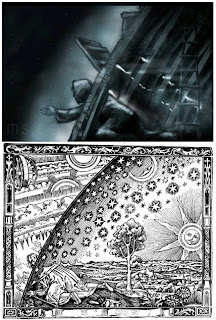 Top: detail from "A star approaches from the east". Bottom: the classic 'Flammarion engraving'.

As reported by Dan Jolin in Empire magazine - Alien 3: The Lost Tale Of The Wooden Planet - Ward's concept was a decaying Gothic wooden space station inhabited by monks, and Ripley crash-landing there would bring the Alien mythos into an effectively mediaeval world that would see the alien in terms of demons. The concept foundered due, it seems, to creative differences and production pressures, There are, however, some 'fossils' of it in the final Alien 3, such as the quasi-monastic community of the prisoners, and the means of the alien's destruction (it was originally to have been in the monks' glassmaking vat).

The Vincent Ward site has a number of concept drawings, and is telling the story as a serialized graphic novel, Alien III Unrequited Vision. It's very nicely done, and is rich in visual allusion, such as the above unmistakable Flammarion quote.