Previously - see Ventnor - good for lungs and plants - I left off our walk on 25th May at Ventnor Botanic Garden. Now for the continuation. Click to enlarge any image.

Handily, the Botanic Garden backs on the Isle of Wight Coastal Path, and you can access this by a gate at the south-eastern corner and walk eastward to Ventnor. The Garden is almost adjacent to Steephill Cove, which was originally a fishing cove at the foot of the grounds of a now-demolished mansion, Steephill Castle. You'll find much more about that here: The writer, the cancer-merchant, his eccentric wife, and the faux castle. It remains a very pleasant little beach, and little altered in topography since this image was taken over a century ago; this Kingston University page has a good aerial photo showing it in context: the foot of an active landslide complex.

From there, the path heads east over the hilly landslipped coastline to Ventnor sea-front. 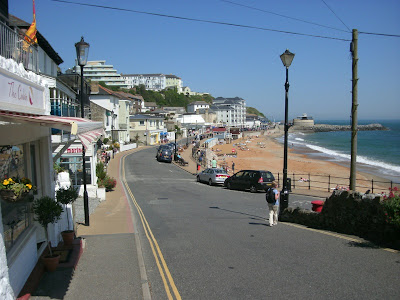 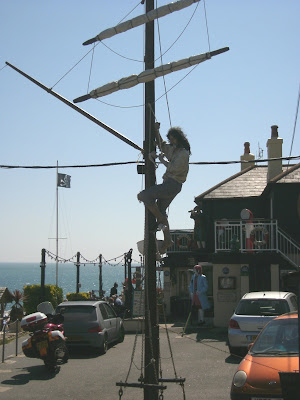 Ventnor's a very distinctive town: a strange mix of styles. The narrow shopping streets are Hardy-esque; there's a spot of art deco in the style of some of the buildings (i,e. the Winter Gardens and the Kingsview complex); and at shore level it has its fair share of the naff and outright shabby, in common with a lot of south-coast resorts. But the overall impression is of faded Victorian chic - it has been described as "shabby-grand" - and it features many charming villas, especially in Upper Ventnor, built up against the terraced hillside on which the town stands. On the hot bright day we visited, it wasn't hard to see how Ventnor got its reputation as a kind of downmarket version of Amalfi.

Its history is surprisingly recent, and largely down to an early Victorian building boom driven by its increasing reputation as a health resort. George Brannon's The pleasure visitor's companion in making the tour of the Isle of Wight (1854 and other imprints, Internet Archive pleasurevisitors00branrich) said of it:


VENTNOR
This fast-improving town was in the year 1830 little more than a quiet hamlet of about half a dozen poor cottages, a grist-mill, one small inn, and a principal hotel. Its rapid advance in building and population is owing to the very general opinion held by the Faculty in favor of the Underclift', as being the most desirable spot in Great Britain for the winter residence of invalids, especially those whose complaints require a mild and dry climate.

Several streets have already been completed, and others are in progress; besides a great number of detached houses and villas. Almost every house is furnished with accommodations for lodgers: there are several resident medical practitioners: and handsome, well-stocked shops in nearly every line of business. The number of Hotels and Inns has also considerably increased of late (see List): and there are established baths of the several kinds most required by invalids, besides the common bathing-machines on the beach.
...
As may be expected, several local improvements are in progress or contemplation: such as more efficiently paving and lighting the town, making a better landing-place, &c.

VENTNOR-COVE
Is well deserving of a visit: the coast is remarkably bold, and in some passages highly picturesque: presenting at particular seasons quite an animated scene —fishermen launching their boats or returning from sea; and numerous visitors variously engaged—some in active exercise near the rippling waves; and others reclining at their ease on the pleasant banks of sand and shingle that are thrown up by the tides. The material of the shore is principally fine shingle, or small pebbles, among which are frequently found particles possessing a brilliancy that has gained for them the title of "Isle of Wight diamonds," and though they may be but of comparatively inferior value in point of intrinsic quality,— still, the interest taken in searching for them is a source of the most agreeable employment, especially to those visitors whose health precludes exercise of a more active nature. The general appearance of Ventnor is, as might be expected, at present greatly injured by the obtrusive glare of so many new houses being scattered about in every direction; an unfavorable though unavoidable effect, which must gradually disappear with the promising growth of the ornamental shrubs so profusely planted, and when building shall be less extensively carried on, and the houses more connected in the principal streets.

Ventnor's development continued. The folksy Cove became the site of a succession of piers - see Island PiersPage 2 - Sandown to Ventnor; after the demolition of the last, a sewage pumping station (ingeniously incorporated into a 'bandstand' scenic feature) occupied its location, with a small fair-weather artificial harbour, Ventnor Haven, adjacent. We didn't go into the town this time, but here are a few images from our 2010 visit.


It's worth taking a ground-level view with Google Street View. Here's the famous Isle of Wight paddling pool. which has been a fixture of Ventnor for decades at least; and this below is on Belgrave Road looking toward Kingsview, an art deco apartment and cafe complex.