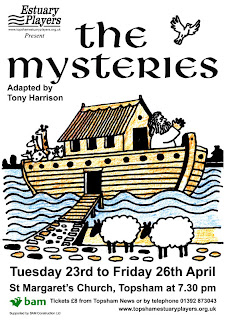 Panic time,  more like! I've signed up to play in the band for a local production of The Mysteries, Tony Harrison's adaptation of the mediaeval mystery plays - rather strange retellings of Biblical stories where the canonical texts are embellished with folk-myth accretions and contemporary dramatic elements.

Ben Beeson, the musical director, was looking for a slightly off-the-wall band line-up, and asked me if I'd like to take part. It's quite a challenge. The production is on in about a month, and my sight-reading is very slow; plus I've had to rapidly sharpen my ability to find specific notes and chords on the bayan. However, the first rehearsal went pretty well, and it seems more people than I realised are in not so different a position.

"The Mystery Plays represent the beginnings of English drama. Performed by the craft guilds around mediaeval cities, they were designed to teach the stories and lessons of the Bible - Old and New Testaments - at a time when not only was the Bible not translated into English, but most people could not read anyway.

"They are a rugged but poetic way of telling stories, and are told with humour, passion, and a relentless devotion to moving the plot along.

"Estuary Players are aiming to make this a big production, with a live band throughout, a large cast and all in the exciting setting of Topsham's magnificent parish church. We are using the adaptation made by poet Tony Harrison for the acclaimed National Theatre production in the early 80's, although that eventually extended to three full plays, and included long plays about the Harrowing of Hell and Doomsday which we are not going to attempt.

"Harrison drew on all the extant cycles, the complete ones of which are the York, Wakefield and Coventry versions, and he retained the mediaeval English where it was understandable still, but where not he retained a Northern rhythm and vocabulary so that the whole is as authentic as it can be and still be perfectly understandable to modern audiences."

Elaborating on this: "I've had to rapidly sharpen my ability to find specific notes and chords on the bayan". It may may sound surprising, pretty lame even, that I haven't practised this as much as I might. But the bayan strongly depends on muscle memory (particularly for the left hand, whose buttons the player can't see) and when playing I'm chiefly aware of the relative positional relationships associated with the key of a tune - tonic, dominant, subdominant, relative minor - rather than what their note names are. I don't often need to (say) hit a G# with no context. 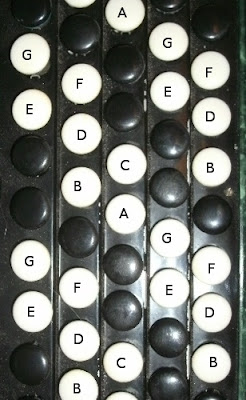 To help with this, I ran up a little reference chart for the white notes.

The convention with button-key accordion note charts is near-invariably to present the keyboard like this as if you were looking at it lying on your side. I don't know why - maybe it's ease of fitting on a page, maybe it's piano accordion influence - but I've never found it very easy to use.

The one I made (right) breaks with that convention, by being orientated the way you actually see the right-hand keyboard if you lean over and look down at it, and I find it a lot more helpful.