On Friday we were in Portsmouth, en route to the Isle of Wight, and despite it being a dismally overcast day, we had a brief look at The Hard (Portmouth's harbour frontage).


View Larger Map
Pan left/right to compare to 1925 image below.
It's an area of strange contrasts: on one side, huge amounts of money have gone into the adjacent Gunwharf Quays; and on the other, the Dockyard has undergone a deal of development as a heritage site around the Mary Rose, HMS Victory, and HMS Warrior. But in between, The Hard remains distinctly downmarket: an anodyne paved harbour frontage adjacent to the Hard Interchange, opposite a rather shabby frontage with a few folksy traditional pubs set among businesses of an extremely mundane flavour, such as a betting shop, a Co-Op, a car rental, a Chinese restaurant, a chip shop, and (weirdly) a Creationist museum.

There are undoubtedly commercial and practical reasons why it's this way; particularly, piecemeal rebuilding in gaps created by World War 2 bombing damage. But I feel it could be redeveloped now in a way that melds upmarket and traditional - as has been done at the Gunwharf Quays - without killing the Hard's use as a working harbour and transport interchange. Portsmouth does have plans, but nothing very rapid seems to be happening. 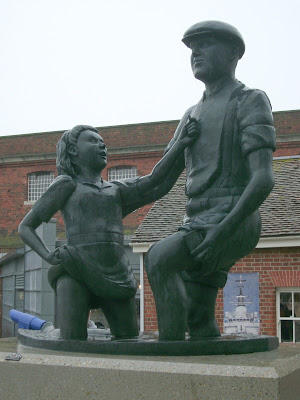 I did spot one evocative and fairly new feature: Michael Peacock's bronze sculpture commemorating the Portsmouth Mudlarks, children and adults who traditionally foraged for coins thrown from the pier. I just about remember seeing the Portsmouth Mudlarks in the very early 1960s, when I used to go to Portsmouth with my grandmother (the same trips we went to Verrecchia's - see Lime milkshake and Kunzle cake). From the descriptive sign:


The nearby statue commemorates the generations of Portsea children who enjoyed mudlarking here - entertaining travellers by retrieving coins they threw into the mud below the bridge to the harbour station and Gosport Ferry. Boys and girls would scramble to find the money tossed down, sometimes diving into the mud, performing handstands or dipping their heads in it. Many Portsea families lived in poverty, so the small change was welcomed. Usually, what the children did not spend on sweets or pie and chips was given to mum to help out the family finances.

Most parents disapproved of their children's activities, while the police regarded mudlarking as begging and tried to stop it. Mudlarking supplemented other ways of earning a few shillings, such as carrying passengers' bags or finding drivers parking spaces. The building of the new bus terminus in 1976-7 put an end to mudlarking.

Michael Peacock's website has more pictures, and background on the commissioning and construction of the sculpture: Portsmouth Mudlarks.

"Mudlarking" does have a much darker story than its final 20th-century incarnation as a form of begging / street entertainment. The original mudlarks were general scavengers, particularly of muddy foreshores adjacent to busy commercial harbours. As the Wikipedia entry for "mudlark" mentions, Mayhew's 1851 London Labour and the London Poor features an interview with a young mudlark (see digitaldickens.com), and Richard Rowe's Episodes in an Obscure Life (volume 3) has a chapter on the subject, A Brood of Mudlarks, which interestingly opens with an allusion to the Victorian urban myth of Thames mud being converted to butter substitute (see previously Pure bosh: a media scare):


A factory, the newspapers say, has been started for the extraction of grease out of Thames mud — grease to be exported to Holland, and thence brought back as Dutch butter. Whether any poor Londoners do really get their butter from the river's slimy bed I cannot state, but there is a little army of poor Londoners who pick their bread out of those steaming mudbanks.
- Episodes in an Obscure Life

There have also been a number of fictional accounts, such as Captain Marryat's 1840 Poor Jack (which goes into the illegal aspects of mudlarking, where mudlarks actively connived in fencing goods and materials thrown off ships by sailors).