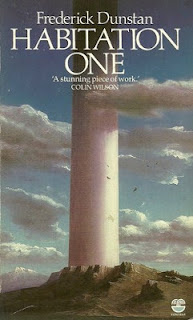 This is one for Felix Grant, who commented recently,


One of my favourite guilty pleasures is reading potted reviews of one and two star rated films.

A conversation elsewhere, that touched on dystopian books and movies, brought to mind a definitely one-star SF novel I read years back, Habitation One (Frederick Dunstan, Fontana, 1983), and I found a few juicy reviews online.


"A conservative Christian allegory ... whose gratuitous cruelty is equalled only by its tedium" — Mary Gentle, Interzone
- quoted in The Ultimate Guide to Science Fiction, David Pringle, 1995

Another new name in 1983 was that of Frederick Dunstan, whose Habitation One is both extraordinary and alarming. It describes the life and death-throes of an inbred community occupying the top of a vast tower three and a half centuries after the nuclear holocaust that drove its ancestors up there. Heavy with gruesome and macabre incidents,  mutilations, impalings, cannibalism and necrophilia, the book obviously intends to alarm, in the grand old Gothic manner. More disturbing than that, this murky brew of tobacco-fug, misogyny and Christian cant was dreamed up not by the usual decrepit don or febrile cleric, but by a nineteen-year-old Birmingham schoolboy. Having now graduated in English from Brasenose College, Oxford, Dunstan doesn't intend to write any more SF: he doesn't regard it as 'a serious genre'. Thank goodness we shall be spared Habitation Two and Three. One is plenty.
- British Book News - Page 138, 1984


The book is a wondrous cornucopia of things for young writers to avoid ... lumpish prose and wooden characters ... gratuitous nastiness ...
...
Hurled skyward and pulverized from the waist down by an immense steam-catapult, one public hero nevertheless retains consciousness throughout his flight, successfully shoots an arrow into the madman who (for reasons never all that clearly explained) is dangling from a rope high up, fields the small nuclear device with which said madman planned to destroy the entire plot, and arcs onward, nuke in hand, to glorious immolation somewhere over the edge of the world. I forgot to mention earlier on that he was tortured by having his moustache ripped off with hydraulic jacks.
...
... a cringingly sententious epilogue which ascribes the unlikely happy ending to divine intervention. I don't see why God should carry the can for the ineptitudes of F. Dunstan. A real running sore of a book, this.
- for full review, see pp 48-49, The Complete Critical Assembly, David Langford, Wildside Press LLC, 2002

Don't get the idea that Habitation One is so bad as to be amusing and worth seeking out; it isn't. I read it once, and don't intend to again. The worst part of it, for me, was not the nastiness, but its excruciating pomposity, which was echoed in author interviews with the pipe-puffing 21-going-on-middle-age Dunstan. I remember particularly loathing that he should get validation as an author via this execrable book inexplicably getting into print. But it's consolation that there's no evidence of his having written anything else that was published. Perhaps, like Grunthos the Flatulent, "his own major intestine—in a desperate attempt to save life itself—leapt straight up through his neck and throttled his brain" to save the world from further works.


There's a certain poignancy in coming across a copy of Frederick Dunstan's Habitation One, a curious post-apocalyptic novel, in Derek's Bookstall in Preston, and reading in the author biography of Dunstan's "lifelong desire to be an author" and that in 1983, when Habitation One was published, he was "at work on his second novel". No second novel ever appeared.
- Nicolas Royle, Lives & Letters, The Guardian Review, January 12, 2013