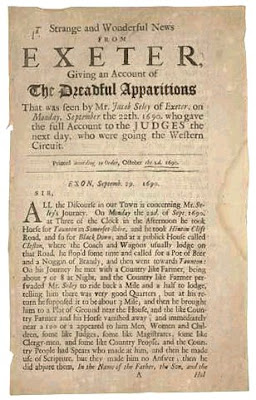 A spot of anecdote / folklore that was new to me:

Strange and wonderful news from Exeter: giving an account of the dreadful apparitions that was seen by Mr. Jacob Seley of Exeter on Monday, September the 22th, 1690, who gave the full account to the judges the next day, who were going the western circuit (published London : Printed by T.M 1690).

I can't find a transcript of this pamphlet online anywhere that's not behind a paywall or institutional password, but a couple of book accounts paraphrase it:


The traveller [Seley], going to Taunton, stopped at an inn and called for a pot of beer and a noggin of brandy. Proceeding on his way he met a country-like farmer, whom he was persuaded to accompany three miles, on the promise of good lodging. Presently the farmer and his horse vanished away, and immediately there appeared a hundred or two—men, women, and children; "some like judges, some like magistrates, some like clergymen, and some like country people." The last made at the stranger with spears, upon which he adjured them in the name of the Trinity. Of this they took no notice, but covered him with a net. Then he alighted off his horse, and when he let go the bridle the horse disappeared, and he never saw him more. In this plight he waited till four in the morning, and, being constantly attacked, thrust at his assailants with his sword, finding nothing but shadow, though he presently perceived a "man was cut, and his four fingers hung by the skin, and a woman was cut in the forehead, leaving blood upon the sword." After this came along ten funerals, one after the other; then two bodies were dragged along, both apparently just slain. In the morning the traveller got away, and happening to meet the Judges on their way to Wells, he gave them an account of his adventure.

If anyone wished to be satisfied of the truth of this story, he was to go to Mr. William Brown, next door to the Windsor Castle, Charing Cross.

Omitting to notice the consumption of beer and brandy, the narrator suddenly remembers, "'tis remarkable" that on the sign post of the inn one of Monmouth's men was hanged, and that about there several were buried who had been either killed or executed.
- p. 57, On some Somerset Chap-Books, Emanuel Green, Proceedings, Volume 24, Somersetshire Archaeological and Natural History Society, pub. F. May, 1879.


And now, to finish up with Exeter witchcraft while we are about it, we may as well relate the sad story of Mr. Jacob Seley, which set all the ever faithful city gossiping so long ago as .Monday, September 23rd, 1690, and is very worthy to be remembered even yet. Mr. Seley, it appears, set forth from his own home in Exeter on the day just named, with the full purpose and intention of riding to Taunton in Somerset. As far as we can gather he jogged along quite comfortably for a considerable distance, following the road through Hinton Clist to Blackdown, at which place there is a public-house called Cleston, "where the coach and waggons usually lodge on that road." Here Mr. Seley stopped some time, and refreshed the inner man. Perhaps he was a thought imprudent; for after he had called for a pot of beer, he had also a noggin of brandy ; but if there was excess, surely even rigid moralists will admit that his punishment was more than he deserved. For when he at last resumed his journey, (the quotation is from a tract entitled "Strange and Wonderful News from Exeter,") "he met with a country-like farmer, being about seven or eight at night; and in the country-like farmer persuaded Mr. Seley to ride back a mile and a half to lodge, telling him there was very good quarters, but at his return, he supposed it to be about three mile; and then he brought him to a plat of ground near the house, and the country-like farmer and his horse vanished away."

This of itself was sufficiently startling to a tired man, and might serve to point the moral how rash it is to ride back upon your road with people whom you do not know. But mark the sequel. "Immediately near 100 or 200 appeared to him, men, women, and children, some like judges, some like magistrates, some like clergymen, and some like country people; and the country people had spears who made at him, and then he made use of Scripture, but they made him no answer. Then he did abjure them." We may pause to remark that it might have helped him more if he had abjured noggins of' brandy. "He did abjure them in the name of the Father, the Son, and the Holy Ghost; for it is written, the seed of the woman shall bruise the serpent's head." However, there seemed to be something wrong in the abjuration, for Mr. Seley did not succeed in bruising the serpent's head, though having laid about him with a hanger which he wore, he formed the conclusion that he had cut off some of its fingers. At any rate there was blood upon his hanger, and then the enemy hung over his head "something like a fishing net," with what purpose exactly does not appear, but no doubt it was a wicked one. All this went on by Mr. Seley's account in a plat of ground not above four yards square. "At last he lighted off his horse, and his horse laid his nose on his shoulder as if he had been a Christian." But even this sorry comfort poor Mr. Seley did not long enjoy; for the spirits gave his horse "something like treacle, and then he let go his horse and never saw him after."


There is a good deal more of this story, prepared doubtless for the consumption of Mrs. Seley when her lord returned. But where Mr. Seley really was all this time is a matter of pure speculation.
- pp46-47, Highways and Byways in Devon and Cornwall, Arthur Hamilton Norway, pub. Macmillan, 1898.

What a complete crock. The chiefly notable thing about this story is that it's timed precisely five years after the 'Bloody Assizes', retributory trials of Monmouth sympathizers conducted, in Taunton and elsewhere, in the aftermath of the Monmouth Rebellion. As such, there's more in it than merely (as the retellings suggest) some meaningless drunken hallucination; as an indictment of the establishment executioners as hostile apparations, it's clearly pro-Monmouth propaganda.

I ran into Mr Jacob Seley on the staff page of Dr Lucy Ryder of the University of Chester, author of the just-published The Historic Landscape of Devon, a write-up of her PhD at the University of Exeter. Her research area looks very interesting:


"the intersections between folklore and archaeology (evidence in published and forthcoming work), and my current research interests focus on the relationship between landscapes and folkloric traditions; using folk belief to examine how societies functioned in past".

I don't terribly trust folklore as having any clear meaning, because its agenda is highly malleable. Ronald Hutton's Stations of the Sun: A History of the Ritual Year in Britain has a particular local example of how bonfire celebrations in southern England, such as that at Ottery St Mary, have clear-cut origins in anti-Catholic celebration, but have been reinvented as having vastly ancient pagan origin. But the thrust remains: the existence of traditions attached to a location seems to indicate that something was significant about the place.