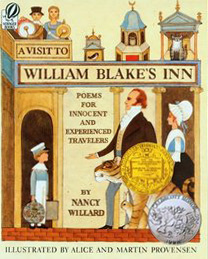 I just ran into an ongoing misattribution story in yesterday's i newspaper: School librarian puts the world straight on fake William Blake poem ("Misattribution of verse started by students on internet is finally corrected by blogger", Richard Garner, The Independent, 20 Jun 2013). The story also appeared on the BBC website: School librarian finds fake Blake poem (Sean Coughlan, 20 Jun 2013), and the story has also been taken up by the Poetry Foundation: A Case of the Wrong Blake.


These tell how a 1981 poem, Two Sunflowers Move into the Yellow Room by the American poet Nancy Willard, published in her book A Visit to William Blake’s Inn: Vintage Illustrated Verses for Innocent and Experienced Travelers, acquired mistaken attribution to Blake himself through a student project contributed to the educational resource site ThinkQuest. This was 12 years ago, and the misattribution has now solidified and propagated. The mistake was spotted recently by a Hertfordshire school librarian and blogger, Thomas Pitchford, who investigated the poem when he "thought the style bore little relation to [Blake's] other work".

Mr Pitchford's own website, The Library Spider, analyses how this particular error took root: Little Poem, who made thee? It acquired particular impetus through getting into the official UK primary education system via copyable lesson plans and highly-regarded resource sites such as ReadWriteThink ("promoted by the National Council of Teachers of English and the International Reading Association").

He's hoping that the discovery will enable correction of the error:


Hopefully over a short amount of time, the list of inaccurate sites will decrease sharply as the correct information begins to disseminate across the Internet.
...
In less than ten years a simple, rather innocent and easily fixable error has evolved into school policy and good practice simply due to the blind acceptance of quick and easy “research”.  Hopefully it will not take that long to repair.

I'm not at all optimistic. The sheer power of the Internet, and its users, to brainlessly propagate misattributions has been demonstrated over and over. Correcting them tends to be like fighting the Lernean Hydra. A quick Google on "William Blake" "two sunflowers" -"Willard" gives you an idea of the work involved if anyone set out to correct the error. Even schools, I'll bet, will not be in a hurry to repair it; it takes work to recopy worksheets or even alter them on websites. A busy teacher is not going to consider correcting a poetry attribution a high-priority task, and people in general are highly resistant to revising their views on established factoids.

A Visit to William Blake’s Inn is a lovely if rather erudite children's book, illustrated by Martin and Alice Provensen, taking the reader on a poetic tour of Blake’s imaginary London inn. Willard's poem's generally take a more upbeat approach to Blake's themes; the inn's guests are inspired by Blake's Songs of Innocence and Songs of Experience; his tiger, for instance, features strongly. In 1982, the book received the Caldecott Honor Medal for children’s literature. There's a nice review, with sample images and poems, at Maria Popova's Brain Pickings blog: A Visit to William Blake’s Inn: Vintage Illustrated Verses for Innocent and Experienced Travelers.

“Ah, William, we’re weary of weather,”
said the sunflowers, shining with dew.
“Our traveling habits have tired us.
Can you give us a room with a view?”

They arranged themselves at the window
and counted the steps of the sun,
and they both took root in the carpet
where the topaz tortoises run.

It's easy to say this in hindsight, but personally, I think you'd have to be pretty poorly-read to think this was written by Blake. At the very least, the use of the contraction "we're" in the first line is a bit of a giveaway to anyone familiar with Blake's archaic style. The modern US spelling "traveling" also stands out. While you need to be sure (American vs UK spelling differences of a couple of centuries ago don't always match the modern stereotypes) this one does check out as anachronistic and regionally wrong for an English writer of the late 1700s. See Google Books Ngram Viewer: travelling,traveling

Compare the verse from Songs of Experience that it alludes to:

Ah, sunflower, weary of time,
Who countest the steps of the sun;
Seeking after that sweet golden clime
Where the traveller’s journey is done;

Where the Youth pined away with desire,
And the pale virgin shrouded in snow,
Arise from their graves, and aspire
Where my Sunflower wishes to go!

Anyhow, do check out Nancy Willard's A Visit to William Blake’s Inn; it's a delightful book. There are more sample pages accessible through the Amazon.co.uk listing (follow the "click to look inside").