On Sunday I played again at TOPJAM, the very friendly open music sessions that have been meeting at various venues around Topsham for some three years now. I think it's finally found its niche at The Nelson, a hitherto neglected pub whose open-plan layout gives plenty of room to circulate for musicians, their gear, audience and other pub-goers.

The standard at TOPJAM is very high, but the bayan has always gone down well as something different from the standard guitar-vocals combination. 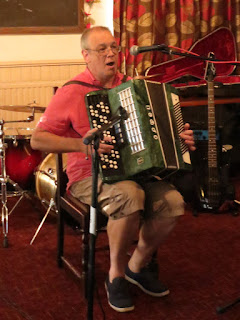 I haven't mentioned the bayan much lately - not through loss of enthusiasm, but because I've largely just been getting on with solid practice that wouldn't be very interesting to describe. A real breakthrough, however, was playing in the accompaniment band that the musical director Ben Beeson put together for The Mysteries in April. The general demands of this project - tight schedule, wide mix of genres, and repeated semi-public and public performance - jogged me into a variety of new areas of playing: improvisation, a lot more confidence in locating left-hand chords, more exploration of the possibilities of right-hand chords, singing while playing, and general experience at playing in front of people (if you've been following these bayan posts, you'll know that hitherto I've felt like the character Invisible Boy in Mystery Men who has a super-power that only works when no-one is looking).

I hadn't realised the sheer cumulative effect until playing on Sunday. I took a break from the instrumental 'party pieces' like Por una Cabeza and Libertango, and brought along some new material, my own vocals-bayan arrangements of Careless Love, Autumn Leaves, and a parodied version of Is This the Way to Amarillo. It went excellently; my hands felt a trifle shaky afterward, but I felt completely comfortable while performing (for the first time, really) and wasn't bothered by distractions. And they liked the songs!

If you're a musician in the area, and haven't encountered TOPJAM, check them out on Facebook (www.facebook.com/groups/TopJam/).