An afternoon in Torquay #1

Reading around in connection with the recent post, Legends of Torquay and nearby, gave me a hankering to have another look around the area, so we went over for the afternoon on Tuesday.

I'm not sure I like Torquay. Its harbour frontage has a superficially attractive vista - a dazzling-white town built amid a cluster of hills - but closer inspection reveals it as a clutter of influences: the odd shabbily-maintained trace of Victorian grandeur, a few genuine examples of that grandeur, a few ultra-modern touches, and the whole capped with criminally unaesthetic 1960s-70s tower blocks. It's rather like a smaller, poorer Monte Carlo.

I won't write a dissertation on how it got that way; it's been done plenty of times. But in brief, it developed as a genteel resort, spa, and place of residence in the 1800s (starting in general in the times when European wars made French and Italian resorts out of bounds for upper-class travellers), peaking in late-Victorian times. The 20th century progressively hit it as richer holidayers went elsewhere, and a trend away from long-stay holidays made its grand hotels obsolete. Rich owners' villas also became financially untenable, and were demolished, making way for extravagant developments in the boom of the 60s-70s. These in turn often didn't stand the test of time (see Kevin Dixon's Torquay’s Other History: The Marine Spa, Coral Island & Aqualand for an account of a particular ghastly one. There's a very good account in the Torbay Council's document Torquay Harbour Conservation Area / Character Appraisal (PDF) - reading that, it's hard not to feel nostalgic for Torquay's heyday. There are many images at Terry Leaman's Torquay site - I particularly like this one:

Nevertheless, if you're a fan of landscape, the Torquay area has a lot of interest once you get out of the main town. My favourite part of it is the peninsula to the east, an area of remarkable scenery and geological complexity. It's a hilly and heavily-faulted patchwork of Devonian limestone, Devonian slates and shales, Permian red sandstones, and even an igneous intrusion. This gives rise to spectacular coastline, made even more rugged by historical quarrying activity, and it's only a short bus ride from central Torquay. For a detailed account, see The Coast around Torquay, a field guide by Ian West and Nikolett Csorvasi.

We took a bus to Babbacombe, where there's a clifftop green giving a classic view of Oddicombe Beach with its limestone headland, Petit Tor Point, and insecure formation of red Permian sandstone and breccia. The latter is currently in the news for its ongoing landslip, which at the time of writing has half-destroyed a property, Ridgemont House (under complicated financial circumstances - see Why you should never buy a house in a blind auction: Sea of red as landslide claims more of Torquay cliff face, taking with it £154,000 home) and is threatening its neighbour, Tor Cottage. 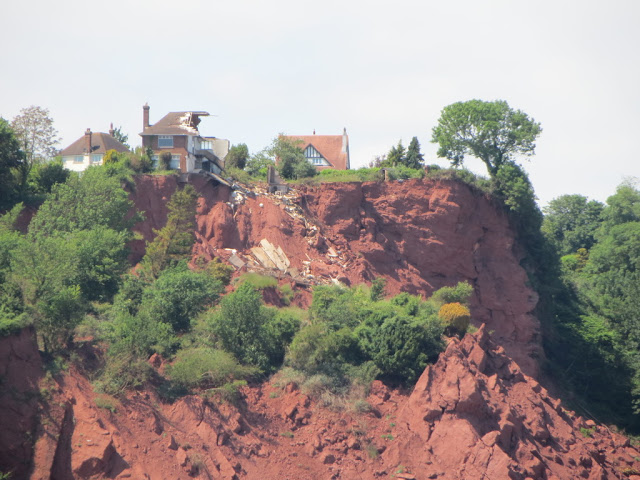 However, Babbacombe isn't all drama. Steps descend the wooded cliff from Babbacombe Downs ...

... to a gastropub, The Cary Arms, from which a reasonably stiff climb takes you up through more woodland to the section of the South West Coast Path that skirts the several bays and promontories of the Torquay peninsula.