The Devil's Chimney and The Chink

On Sunday we revisited the Bonchurch area, and started with the descent into the East End landslip.

For those who haven't seen previous posts on this topic, the topographical situation here - southern Isle of Wight - is that harder Cretaceous strata lie over softer ones, giving a landslip terrain capped by a sheer escarpment of chalk crags, some 7 miles long. At a handful of locations, paths descend from the top of this escarpment through deep clefts in the rock (probably natural joints enlarged), and this visit took in two of them, in the section called the East End landslip, whose terrain dates from slips in 1800 and 1818.

The Southern Vectis No. 3 bus (Newport via Ventnor to Ryde) stops at a car park on Leeson Road, on the slope of Nansen Hill, and it's a short walk to the Smugglers Haven cafe either through lightly wooded parkland or the walled scenic path runs along the edge of the clifftop. Hereabouts there are two stiff descents by steps down rock clefts into the landslip and coastal path below: The Devil's Chimney is to the south, accessed from the corner of the Smuggler's Haven lawn; but there's a second one to the north, almost adjacent to the car park. Its official name appears to be The Chink, though discussions among Isle of Wight aficionados on YouTube have also called it The Son of Devil's Chimney

I checked out The Chink first. This being a bit of a geeky side-excursion, Clare declined on this one. It's a steep but short descent, with a handy seat at the foot of the first steps, giving a view up impressive ash tree roots. Click any image to enlarge. 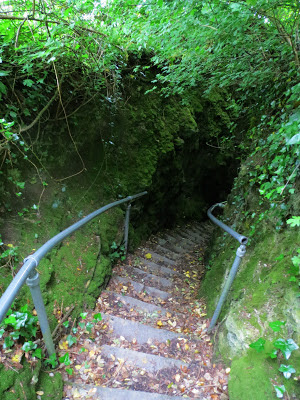 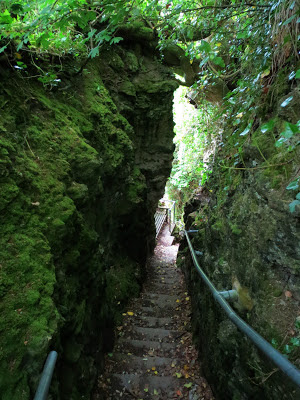 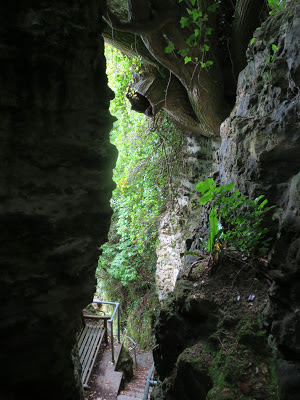 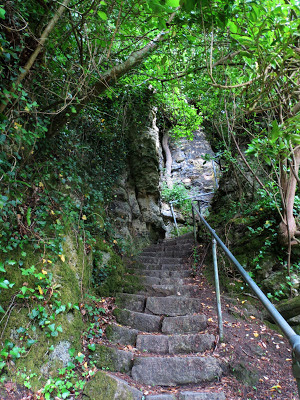 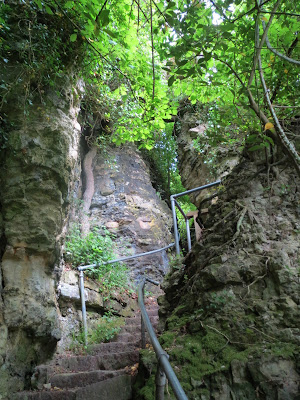 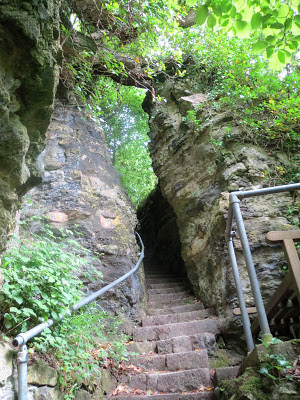 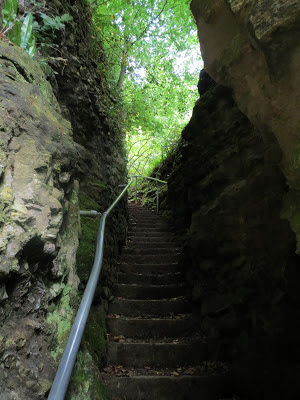 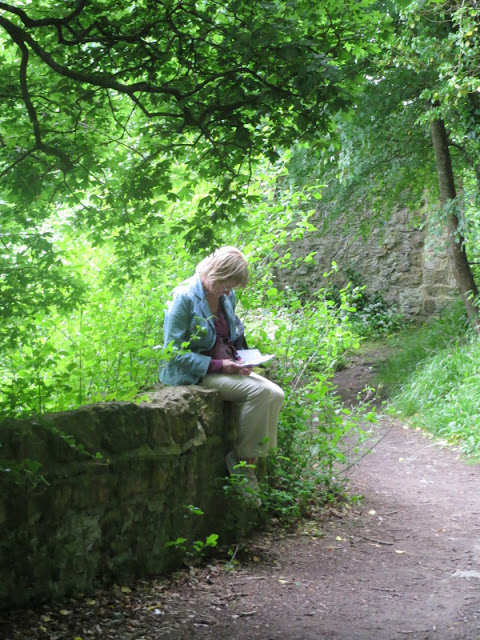 And on to The Devil's Chimney proper. This is a considerably more spectacular affair, very deep, dark and narrow: I need to take off my rucksack to get around the final bend at the foot. 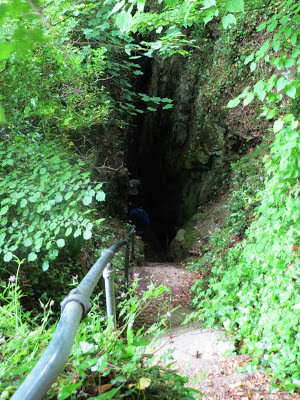 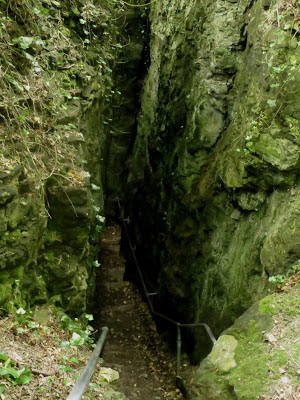 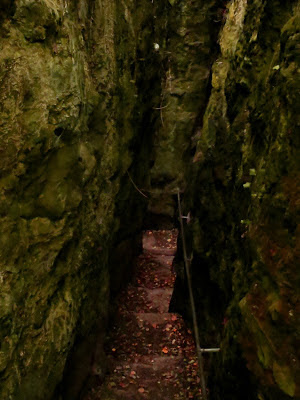 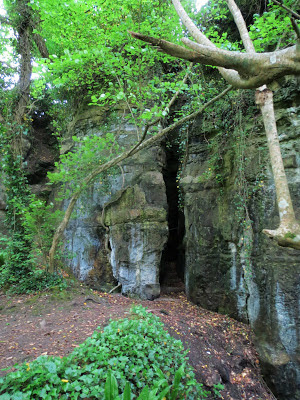 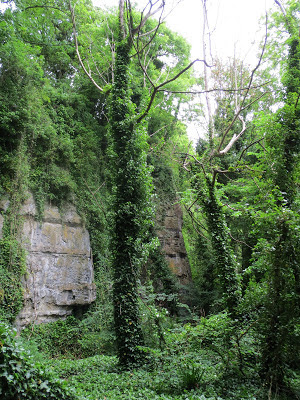 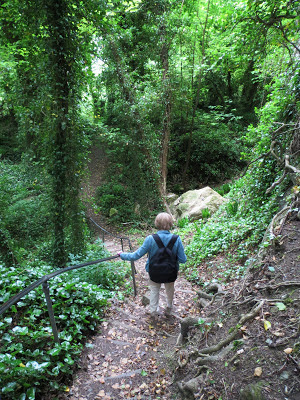 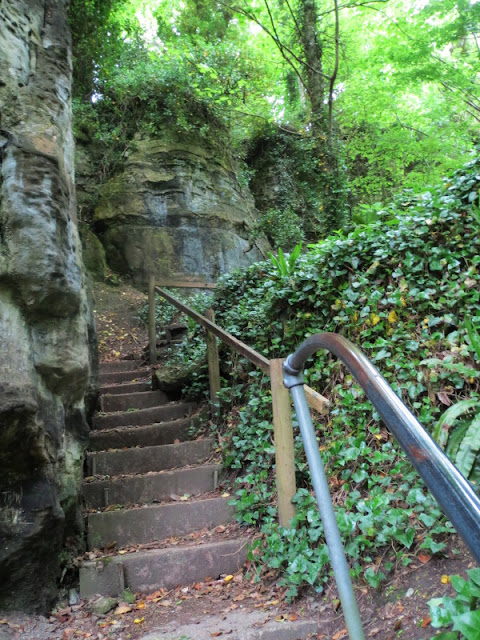 This brings us to the point I reached by ascending from the coastal path a year ago - see The Landslip - Bonchurch to Shanklin. I didn't realise at the time how near I got to The Devil's Chimney; its narrow lower end is invisible from the path until you're very close.

This also completes the trio of publicly accessible rock staircases cutting through the Undercliff crags: The Devil's Chimney; The Chink; and The Chimney in Upper Bonchurch. I suspect these names are surprisingly recent: despite the Isle of Wight County Archaeology and Historic Environment Service's Historic Environment Action Plan: The Undercliff referring to the location as ...


Developed in Victorian times as a picturesque woodland walk, complete with the natural horrors of ‘The Devil’s Chimney’ and ‘The Chink'  as well as the romantic ‘Wishing Stone’.

... I can't find any references to these names going back more than a few decades. Neither the Devil's Chimney nor The Chink feature on the 1908 Ordnance Survey map, but first appear, unnamed, on the 1947. The Devil's Chimney isn't named on OS maps until the 1970s. Nor have I been able to find any old images or old accounts of either (though there are plenty of postcards of the "Stone Seat" in the landslip below). It's a puzzle; do any readers know any more about the history?

At least one other rock staircase certainly did exist, as I quoted previously from Edmund Venables's 1867 A guide to the Undercliff of the Isle of Wight, Shanklin and Blackgang ...


Passing the gate of Cliffden (Gr. Hibbert, Esq.) one of the loveliest of the many lovely spots in this place where all is beautiful, and the Rectory, we reach the Upper Terrace, and the Hotel ('Ribbands'), which has acquired a well-deserved reputation as one of the best and most comfortable in England, and offers an admirable winter retreat to such as are indisposed to incur the trouble of housekeeping. The grounds at the back command some fine views, and the heights may be reached from them by a rough rock staircase.
...
Several of the houses on the Upper Terrace enjoy the same privilege with the Hotel of scaling the cliffs by one of the rifts that seam its face. There is also a public path or "chimney" at the back of Woodbine Cottage, but so steep and so badly kept as to deter all but expert clamberers.

... but the current state is unknown.

See Undermount for our continuation of the afternoon's walk.

Update: 7th January 2015
I was interested to see that there's a detailed description of the Devil's Chimney as a location in Ali Sparkes' children's SF thriller Unleashed: Mind Over Matter (Oxford University Press, 2013). See the Google Books preview.