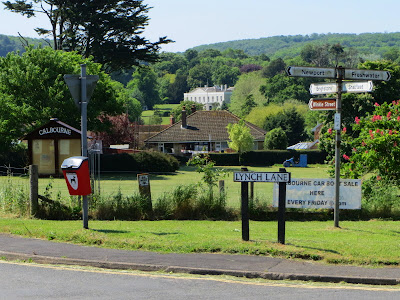 Finally, on Saturday June 8th, we got to Calbourne - the core location, fictionalised as "Malbourne", of Maxwell Gray's The Silence of Dean Maitland.

It wasn't easy. This is a village in the core of the 'West Wight' that, for a very touristy island, is still surprisingly inaccessible if you don't drive. We could have walked the couple of miles from the nearest bus route, as we did in March (see To see Swainston), but my brother-in-law Steve kindly gave us a lift out to Calbourne, and we took the eastern third of the Tennyson Trail back to Newport (of which more later).

One of the first cool things about the visit was seeing this plaque on Grants Cottage commemorating William Henry Long: 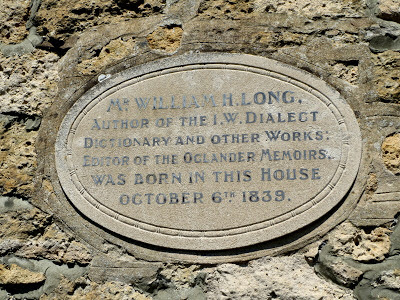 This is not the American mycologist of the same name, nor even the Sundance Kid, but the Calbourne-born writer I briefly mentioned in the post about the Maxwell Gray novel Ribstone Pippins. He's an interesting chap who got the break to rise from illegitimate birth and majorly poor roots to become a writer, bookseller, and member of the English Dialect Society.

There's a detailed account of him here - About W. H. Long - at the website of the Isle of Wight folk group The Dollymopps, particularly commemorating his contribution to the folk tradition in recording the lyrics of Isle of Wight folk songs. Here are his books online:
There are a couple of points arising. I mentioned a while back - see Ribstone Pippins - that I very strongly suspect Maxwell Gray's Isle of Wight novel Ribstone Pippins to have been written with a copy of A Dictionary of the Isle of Wight Dialect to hand - the spellings and vocabulary choice were so similar. But there's another possible Maxwell Gray connection. William Henry Long was the illegitimate son of William Warne, a chaise driver in the employ of Sir Richard Simeon at nearby Swainston Manor, and Eliza Long, a farmer's daughter. With a  bit of juggling of roles, could this have been the inspiration for the situation in Gray's The Silence of Dean Maitland, when Alma, the daughter of a coachman on the "Swaynestone" estate, gives birth to an illegitimate child?

As I said, more later. It was an extremely nice weekend. Quite apart from going to one of my sisters' 40th birthday party, we got in some good walking, and (on my part) a bit of photography and some major closure on a couple of my Isle of Wight topographical obsessions. I'll blog about these these non-chronologically: some need more background research than others.