Further to Shaldon: sea, sand, and subterranea: a few more impressions of Teignmouth. Like many southern resorts, it's a mix of styles; once you get away from the obvious resort frontage, it has a much older section at its southern end, leading to its working harbour and Back Beach, where houses back directly on to the Teign's shore. I've been meaning to visit for a long time, and was pleased to find it hadn't been concreted over; the recently-completed tidal flood defences looked pretty unobtrusive. I won't write in any detail on this: instead, I recommend checking out Angela Williams' detailed accounts at her Literary Places blog: In the footsteps of John Keats / Keats at Teignmouth / More on Keats at Teignmouth.

Considering the temperature being well over 80°F, a walk perhaps wasn't the greatest of ideas, but I stocked up with plenty of water and finished the afternoon by following the South West Coastal Path to Dawlish. It's a slightly fragmented section, diverted inland by general terrain, the railway, and residential development (various upmarket clifftop houses), but it's still of interest.

The first stretch runs along the sea wall, parallel to the railway, as far as the promontory Hole Head. There the railway goes into Parson's Tunnel, and the Coastal Path diverts inland up Smuggler's Lane. A number of accounts - I've not been able to track a primary source - have variants on this ...


According to local folklore there is a cave down near the Parson and Clerk rocks that leads to a tunnel which has an exit in the grounds of this house, Sunnylands. Rumour has it that when the railwaymen were building Parson’s Tunnel they blocked off the entrance to the smuggling tunnel.
- South Devon Railway - Discovering Britain

... but as I've said, I don't buy into this smuggler obsession. Historically, the well-off regularly had tunnels dug for practical and fanciful reasons (check out, for instance, the 5th Duke of Portland, the Williamson Tunnels, Undermount, and the previously-mentioned Lord Clifford of Ugbrooke). In the 19th century Hole Head saw the building of a string of large villas - Sorrento, Derncleugh, Holcombe House, Edencliff and Peak House (see Holcombe Conservation Area - Character Appraisal) - the owners of any of which might have seen the opportunity for beach access via a private tunnel.

There is a slight literary connection here: Maurice Drake's 1915 The Ocean Sleuth is a crime novel concerning, in part, the switch of a batch of real and counterfeit notes from a train stopped in the Parsons Tunnel. It's worth checking out for the detailed description of the narrator's exploration of the railway and its tunnels in aid of solving the mystery: see the Internet Archive ID oceansleuth00drakrich.

Smuggler's Lane ascends steeply up to the main Teignmouth-Dawlish road; you follow that for a little, past the private enclave of  Holcombe Drive, and then you can either follow the road (I did) or rejoin a coastal section that soon returns to the road. Just before you reach Dawlish, the path leads into a little park at the top of Lea Mount, which has great views back to the Parson and Clerk, and forward toward Dawlish.

Click any image to enlarge
From the park at Lea Mount, you can then take various landscaped paths down to the sea wall at Dawlish, and then on to the railway station.

Click any image to enlarge
A geographical/historical note: it's interesting as a contemplation on changing attitudes to consider the reaction if someone suggested nowadays cutting a major railway route - this is the classic 'Riviera Line' - through coastal scenery, and considerably unstable coastal scenery at that. Brunel's route ran into problems from the start - the Morning Chronicle documented a landslide blocking the line near Smuggler's Lane in December 1852 - and this has continued ever since. See Landslips on the Teignmouth to Dawlish Line at Devon Heritage: part 1 / part 2 / part 3.

The railway wasn't all that's been affected. These are more or less the same strata as those which collapsed with the destruction of Ridgemont House at Babbacombe (see An afternoon in Torquay #1), and there's been repeated coverage of a similarly threatened house above Horse Cove in Dawlish (see Huge landslip leaves £1.75 million luxury cliff-top mansion closer to the edge, This is Cornwall, February 10, 2011). I don't know what Horse Cove looks like now, but I visited it in August 2007, before the recent landslips. It's not normally accessible on foot, but at low tide I waded round from the public beach at Coryton Cove. Apart from a sea cave and various drainage outflows, it had an interesting, but inaccessible, entrance in the cliff. I've no idea of its purpose, but I'm not assuming smugglers.

The landscaped paths down Lea Mount to the sea wall at Dawlish date from the late 19th century and remodelling to stabilise the cliff after a tragedy. This pre-1885 view - Dawlish, Rocks and beach, Coryton's Cove - from Francis Bedford's Devonshire Illustrated stereoscopic series shows an accident waiting to happen: a high-tide path, running under an overhang, used by swimmers visiting the "gentlemen's cove", as it was called (bathing was segregated) . The 1869 Cornelius's guide - Dawlish has a contemporary description of the spot (see page 46). 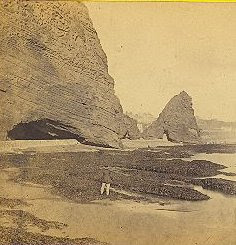 Following unheeded warnings from the Reverend RHD Barham, rocks above the overhang collapsed in 1885, killing three of a party of women and children preparing for a picnic lunch.