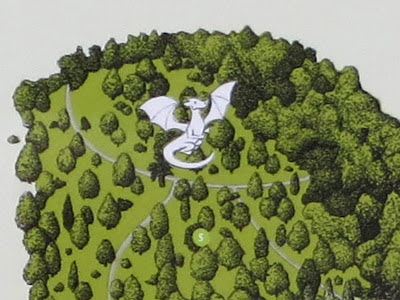 Further to Sunday's post about Killerton: I noticed the location board for the park had a little dragon on the wooded summit of Killerton Clump. Looking afterward at the literature found the explanation for various dragon-themed wooden structures around the hill: a children's trail, the Dolbury Dragon Quest.

I assumed uncharitably that this had just been invented as a marketing angle to add children's interest to a woodland walk. But no, it turns out to be based on a real piece of regional folklore involving dragons and treasure. Google Books rapidly tracked it back at least to Francis Grose's 1787 A provincial glossary:

Cadbury-caſtle, (alias Caderbyr) the land of William de Campo Arnulphi, and after of Willowby, Furſden, and now Carew. This caſtle may be ſeene farr offe (ſo they tearme of highe upright, topped hill, by nature and flyght art anciently fortified, which, in thoſe Roman, or Saxon warrs might be of goode ſtrength, conteyninge within the compaſs thereof, near - - - - acres. Here you may ſee ſome fyve myle diſtant, to the ſouth-eaſt, in the pariſh of Broad Clyet, another down, called Dolbury-hill, between theſe two hills (you may be pleaſed to hear a pretty tale) that is ſaid (I sett not downe thoſe wordes to leſſen your belief of the truthe of the matter) but to lett you knowe that, nil præter auditum habeo.

Take yt on this condition.
Yt holds credyt by tradition.

That a fiery dragon, or ſome igniſ fatuuſ in such lykeneſs, hath bynne often ſeene to flye between theſe hills, komming from the one to the other in the night ſeaſon, whereby it is ſuppoſed ther is a great treaſure hydd in each of them, and that the dragon is the truſty treaſurer and ſure keeper thereof, as he was of the golden fleece in Cholcos, which Jaſon, by the help of Medea, brought thence; for, as Ovid ſayth, he was very vigilant.

And, as the two relations may be as true one as the other, for any thinge I knowe, for it is conſtantly believed of the credulous heer, and ſome do averr to have ſeene yt lately. And of this hydden treaſure the ryming proverbe here quoted goes commonly and anciently.—Ibid [Weſtcot's Hiſt. Devon. Harl. MSS, No. 2307]

Grose furthermore cites his source: "Westcote's History of Devon", which is given as the Harley Manuscript 2307 (the Harley Manuscripts being one of the major and founding collections of the British Library). It doesn't seem to be referenced in the BL online catalogue, but it dates from 1630, and what appears to be the same work appears in a modernised imprint as A View of Devonshire in MDCXXX: With a Pedigree of Most of Its Gentry (by Thomas Westcote, Gent., edited by the Rev. George Oliver, D.D., and Pitman Jones, Esq. [pub] Exeter, William Roberts, 197, High-Street, 1845 - Internet Archive ID viewofdevonshire00west). The dragon story appears on pages 110-111. It was heavily recycled in any number of 19th century accounts of Devon and folklore (see Google Books).

It's interesting to compare this story with the claimed Topsham / Duke of Monmouth connection (see "Make of thee a city"); folklore of genuine antiquity, like that of the Dolbury dragon hoard, tends to have a paper trail longer than the late 19th century. Dolbury is, incidentally, an Iron Age hillfort dating from around c.400 BC—43 AD. It doesn't seem to have been much - if at all - investigated archaeologically. 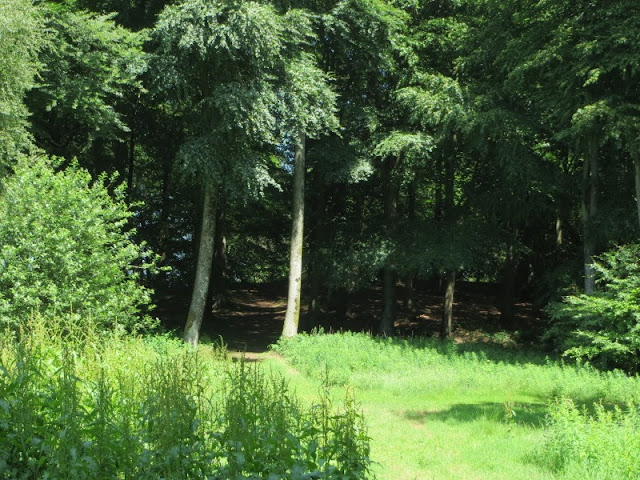