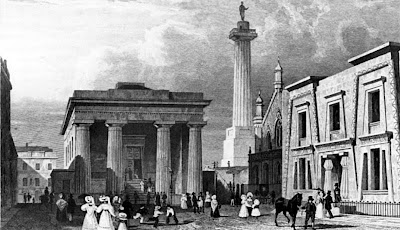 Following the recent post Devonport Column open to public, I was interested in a historical loose end: are there any detailed records of the Mount Zion Calvinist Chapel that formed part of John Foulston's development of a new Devonport town centre? 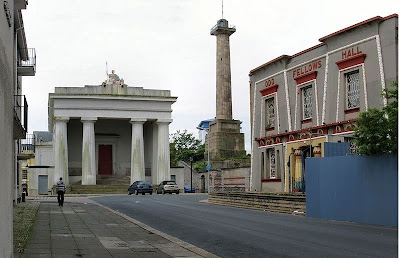 As you can see, three of these structures still exist: the Parthenon-inspired town hall (now Devonport Guildhall); the Egyptian-style library (now the Oddfellows Hall); and the 124-foot column commemorating Devonport's rebadging from its previous incarnation as "Plymouth Dock". But the chapel, built over 1823-1824, was demolished in 1902 due to its poor condition (see Plymouthdata.info).

A number of contemporary accounts describe it, and it sounds rather cool:


This strange-looking edifice was designed by Mr. Foulston, in what he called the Hindoo style.
- page 65, History of the town and borough of Devonport, Richard Nicholls Worth, 1870.

Mount Zion Chapel exhibits an ingenious adaptation of Mahomedan architecture to christian purposes. It was erected in 1823-4, at a cost of about £2000. The spectator will, no doubt, remark upon the singular commixture of styles, as shewn in the proximity of the several buildings just described, and which seem as if they had here met in parliament, to prefer the respective claims of their Greek, Egyptian, and Oriental constituents. The assemblage, though strange, is certainly picturesque ; and, if we hesitate to recommend the repetition of such experiments, we are far from regretting, that in this instance they have been made.
- Nettleton's guide to Plymouth, Stonehouse, Devonport, and to the neighbouring country, 1836 (Internet Archive ID nettletonsguidet00wigh).

Mr. Rowe * gives the following description of the exterior of this building :—" It is designed by Mr. Foulston, after the Hindoo style, with the ornaments and accompaniments appropriate to that fantastic manner, but of massive and bold proportions. These are so judiciously arranged, that the whole front presents a highly-effective and pleasing appearance; and the building, though placed in juxta-position with the fine portico of the Town-Hall, maintains its rank, and seems to suffer nothing from a contrast, which would be destructive to many buildings, in which bold and picturesque effects had been less the objects of the architect's attention." This Chapel was commenced in November, 1823, and finished in July, 1824, at a cost of about £2000.
- page 32, Devonshire & Cornwall illustrated, from original drawings by T. Allom, W.H. Bartlett, &c., with historical and topographical descriptions by J. Britton & E.W. Brayley. John Britton, Edward Wedlake Brayley, 1832.

* This refers to the Rev. Samuel Rowe's 1821 Panorama of Plymouth; or, Tourist's Guide to the Principal objects of Interest in the Towns and Vicinity of Plymouth, Dock, and Stonehouse, which is not online.

All these accounts, however, are lacking in decent pictures; the chapel only gets a supporting role in general pictures of the assemblage of Foulston buildings in Ker Street, Devonport. I've found these online:

Did anyone ever get a complete picture, external or internal, of what sounds like a remarkable building?

Addendum: For more investigation, see Foulston's "Hindoo" chapel, Devonport; I visited the Devon and Exeter Institution, and had a look at Foulston's own 1838 account, The public buildings erected in the West of England as designed by John Foulston F.R.I.B.A.