It being another fine day (and Clare not being a fan of the heat) I took myself out this afternoon for a look at Shaldon, which I've never visited. Shaldon is the village on the other side of the mouth of the Teign estuary from Teignmouth, and is reached by a small ferry from the delightful Back Beach that adjoins the working section of Teignmouth Harbour (more on that later). I particularly wanted to check out so-named Smugglers' Tunnel that gives access through The Ness, the promontory of Permian breccia, to Ness Cove behind. It got into the news at the end of March when two people were trapped at Ness Cove by a landslip at the beach end of the tunnel. As you can see from the BBC account - Two women rescued from Ness Cove after landslip - it didn't actually block the tunnel, just the access steps. It's back in service now. 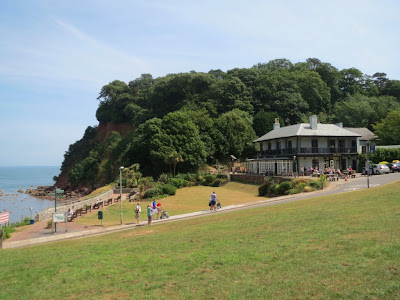 The tunnel is a short walk from the ferry landing, just a little uphill from the Ness House Hotel at the end of a short driveway behind the public car park. There's an old limekiln by the entrance. 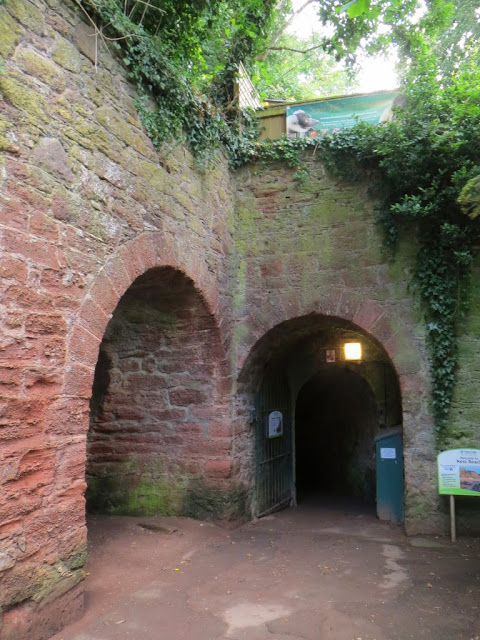 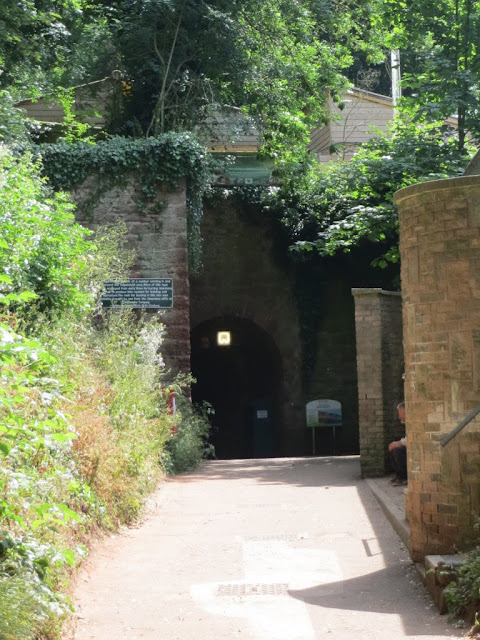 It's not a scary tunnel; it's solidly-bricked and well-lit, wide enough for two people to walk side-by-side; it takes only a couple of minutes to reach the beach.

There's a first straight section (with a ventilation shaft on its right) descending gently, then a junction and bend of about 30° right followed by a similar slowly-descending section, then a bend of 30° left leading to a flight of steps, then finally a sharp bend left to the beach exit.

Here's a YouTube video of the walk-through (not by me):

And so to the puzzles. Firstly, what's the tunnel's origin? Various official websites call it "an original smuggler's tunnel" (see Torquay.com, Teignbridge District Council, and Shaldon Devon). But this reeks of the regional obsession with linking to alleged smugglers any small, obscure, picturesque or unusual way of reaching a beach. One more likely theory is that its purpose was carting limestone that had been shipped to Ness Cove:

Another is that its purpose was private beach access for Lord Clifford, whose marine villa was the house now occupied by the Ness House Hotel (see British Listed Buildings ID 461032). This is the purpose cited in a number of 19th century regional guides, of which this is the earliest I can find:


The Ness now forms a pleasant little lawn to the marine cottage of Lord Clifford, situated just under it. His lordship has cut a tunnel 210 feet long through the base of the cliff, large enough for a carriage drive, communicating with the beach outside.
- page 195, The route book of Devon, 1846

The courses of the various incarnations of this tunnel would make for a bit of interesting historical detection. As described in Mary Waugh's Smuggling in Devon and Cornwall: 1700-1850, the present tunnel is clearly diverted - there must be a further tunnel segment behind that green wall at the junction. Then there's the larger, but blocked, second tunnel entrance at the beach end, to the left of the current public one: presumably this was the original, "large enough for a carriage drive". 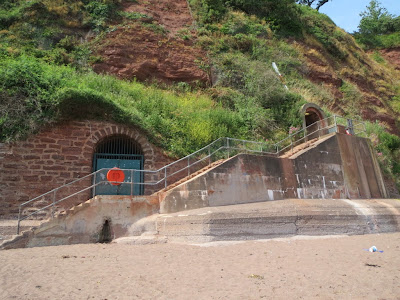 Furthermore, this is intriguing: what appears to be another ventilation duct in the woods next to the South West Coastal Path round the Ness, just a few yards uphill to the east of the Ness House Hotel, and nowhere near the beach tunnel. 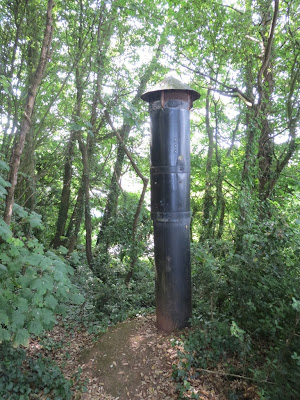 Addendum: Clare and I revisited on August 2nd, and I spotted an information board I somehow missed on the first visit. The Ness at Shaldon had considerable development as a WW2 defensive position, with various buildings and bunkers. I suspect that explains the pipe, and there is an outhouse in the pub garden backing on to the slope below it. See the sign (click to enlarge): 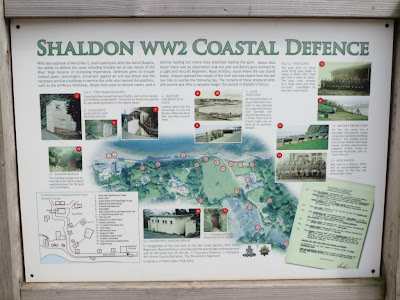