The making of Gosport Park

I'm always fascinated by the landscape stories that it's possible to unearth using readily available sources. Yesterday a question was raised in the Gosport Memories group in Facebook about the origin of "The Dell", a recessed and banked oval of land in Gosport Park, Gosport, Hampshire (see Bing Maps).

With this kind of thing, it's always worth checking the excellent Old Maps map archive site, which readily finds that The Dell and the Park itself existed in 1898 ...

... but didn't in 1881, when the area was just a tract of common land called Ewer Common, on a peninsula between two creeks, Stoke Lake to the south, and Workhouse Lake to the north.

This Martin Snape lithograph (found at www.richardmartingallery.co.uk) gives a good idea of what the land was like: heath and very low-grade pasture. 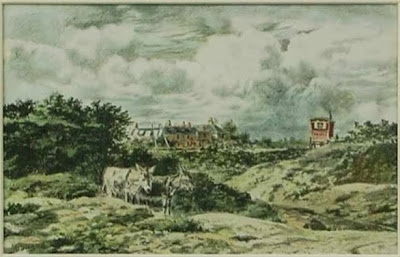 A look in the British Library 19th Century Newspapers archive finds that the land was transformed in the late 1880s, the driver behind the project being Colonel Charles Mumby. See Charles Mumby & Co., Gosport and Portsmouth: Memories Evoked by the Isle of Wight Steam Railway for a good biographical summary. (He wasn't a 'real' colonel, by the way - this was the kind of era when the local bigwig automatically got parachuted into some medium-high rank in the regional volunteer battalion - roughly equivalent to the modern Territorial Army). An all-round Victorian entrepreneur who'd become rich chiefly from mineral water manufacturing in Gosport, he'd risen in the town hierarchy to become chairman of the Local Board (precursor to borough council), and one of his projects was the proposal in 1886 to develop Ewer Common as a public park.


The Chairman said that while at Ewer Common some time ago he thought that this large tract of land which measured nearly 30 acres, would form a very desirable place of public recreation. While paying a subsequent visit to London, he saw the Chief Clerk to the Secretary of the Ecclesiastical Commissioners. who were the Lords of the Manor at Alverstoke, and learned from him that no revenue was acquired from the land. He then wrote a letter to the Commissioners stating that the Common was merely used as a squatting place for gypsies and for digging gravel for the repair of roads, and that to his knowledge no common rights had been exercised for many years and he therefore asked whether the Commissioners would be willing to hand over the land for a public recreation ground. A favourable reply had been received, and he now moved that the question be referred to the Roads and Works Committee, for them to negotiate with the Ecclesiastical Commissioners with a view to acquiring Ewer Common.
-  The Hampshire Telegraph, February 13, 1886

It seems fairly high-handed of Mumby to present the plan at such an advanced stage, and there were objections - particularly from a Mr Treacher, who argued that this, like a previous deal to acquire land for building Thorngate Hall, amounted to misrepresentation and fraud. (I assume his implication was that Mumby was exaggerating the worthlessness of the land in order to get the owners to relinquish it). However, the resolution was passed. Treacher's objections continued over the next few years - chiefly about the general expense and the legality of the funding process:


Mr JF Treacher said that if he went according to his belief, he would oppose the motion [to borrow money to fence the park under construction] tooth and nail, but as the ground was commenced, he would remain neutral. He could hardly say that they had carried out this work in a strictly legal manner, as they had been drawing funds from the general district rate, for which no resolution had been passed. The total sum spent on Ewer Common would have been sufficient to build an Infection Diseases Hospital. Besides the Common was not in a central position, and would only be of use to a portion of the parish.
- Hampshire Telegraph, May 16, 1891


OPENING OF THE GOSPORT PARK
Wednesday was a red letter day in the history of Gosport. In magnificent weather the new Park at Alverstoke was formally opened to the public. … A piece of land that was useless, except as a camping-ground for gypsies, is now transformed into a well laid-out recreation ground, with a capital cycle track and running path. The track itself, which is about three laps to the mile, is egg-shaped, the curves making easy sweeps. An unsightly gravel pit has been turfed, and will make excellent courts for tennis, the sloping sides sheltering the players, and effectually keeping the balls from straying too far. A spacious carriage-drive runs round the whole ground, and altogether the Gosport Park is an ornament and a credit to the parish.
- Hampshire Telegraph,  June 20, 1891

The Dell, although not named as such in the account of the opening, is clearly the site of this egg-shaped track.

The Ewer Common peninsula has other historical interest as the site of the former Alverstoke House of Industry, one of the first radially-designed workhouses (hence the adjacent creek being called Workhouse Lake). You can see a detailed ground plan on Old Maps, which has a 1:500 town plan:

Closed after WW2, the workhouse site was used as an industrial unit until its demolition in 1989, and all that remains is its northern gateway, converted into a house. See The Workhouse / Alverstoke for further details and pictures. There's a slight Isle of Wight connection I didn't know about: Valentine Gray, the 'Little Sweep' who's commemorated in Church Litten park, Newport, was a former inmate.

- Ray (with thanks to Christopher Pope and Gary Baltao)
at 15:01