Wonders of the Isle of Wight: growth of a meme 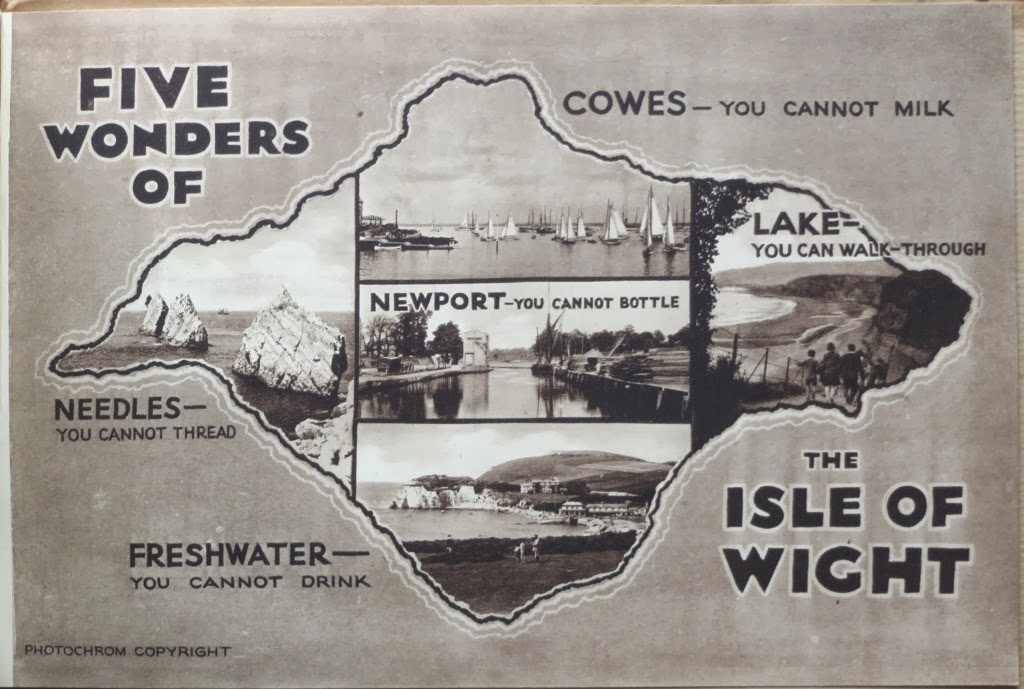 Another image from the pleasant booklet, c.1910, Isle of Wight: Forty-one camera studies of the nooks & crannies, bays & chines of the garden isle, produced by the Photochrom Company of London and Tunbridge Wells (see previously, Nooks and crannies - an ill-fated housing boom).

This is one of the many incarnations of the 'Wonders of the Isle of Wight' - "Cowes you cannot milk, Lake you can walk through, Freshwater you cannot drink, Needles you cannot thread, and Newport you cannot bottle" - though the number and choice of locations has been variable.

The earliest precursors I can find appear in the 1850s-60s, where a number of comic journals contain variants on this pun:


A Truism.—There is one remarkable feature in the Isle of Wight, not generally known, which is, that any person who visits there may obtain mutton from Cowes.
- True Briton: A Weekly Magazine of Amusement and Instruction, Issue 6, Sep 8, 1853


What extraordinary kind of meat is to be bought in the Isle of Wight?
Mutton from Cowes!
-  Puniana: or, Thoughts wise and other-wise, Hugh Rowley, 1867


Why is the Isle of Wight a fraud? — Because there's Cow(e)s you cannot milk, Needles you cannot thread, and Freshwater you cannot drink.
-  Children's Corner, Aberdeen Weekly Journal, March 1, 1899

A similar joke was widely syndicated in various newspapers worldwide in 1901, expanded to four items:


Why is the Isle of Wight a fraud? Because it has Needles you can't thread, Freshwater you cannot drink, Cowes you cannot milk, and Newport you cannot bottle.
- Fun and Fancy, The Star [Christchurch, NZ], Issue 7273, 7 December 1901

In 1908, the concept made the jump to pictorial form in a card by William James Nigh, a Ventnor postcard maker, who produced a "The Five Novelties of the Isle of Wight" card:

The copyright registration is in the National Archives:

(William Dederich was a fine-art publisher; WJ Nigh & Sons is still extant, now in Shanklin).

The Wonders of the Isle of Wight page at wightindex.com has a nice collection documenting the various incarnations of the idea on postcards since: "Novelties" became "Wonders" (and occasionally "Contradictions" or "Peculiarities"), and increased to as many as eight.

In the 1930s, the idea was co-opted into use for a Shell Oil advertisement: 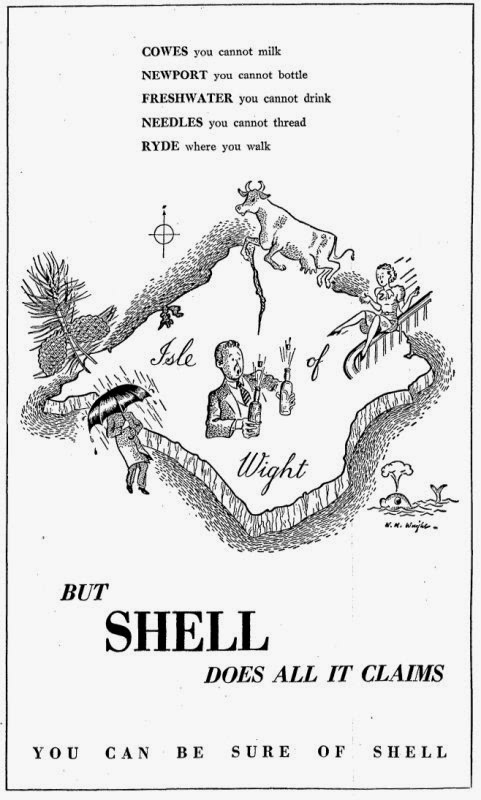 As seven, the wonders are featured in the somewhat naff murals, created as a community project in 2008, at the Ryde Esplanade bus and rail terminus.

The meme acquired a modern spin in 2012 when it was featured in Ed Petrie's All Over the Place slot on the BBC children's section CBBC.
- Ray
at 06:48