A fascinating development arising from the Isle of Wight County Press feature on A Wren-like Note: a correspondent has sent me a clear identification of the original for the wronged coachman's daughter Alma Lee, a central character in Maxwell Gray's 1886 The Silence of Dean Maitland.


Judy Stoneley, of St Lawrence, Isle of Wight, contacted me to tell me that two of the characters in the novel - Alma Lee and her coachman father Ben Lee - were based on members of her family: her great great grandmother on her mother's side, Ellen Leigh, and Ellen's father Samuel, head coachman for Sir Barrington Simeon at Swainston.

The identification came from Judy's mother's research some forty years ago into the Leigh family history. Born c. 1826, Ellen was brought up on the Swainston estate, and in the mid 19th century left to marry a George Rashley. They had children including Edwin Collin Rashley (who went on to found the Rashley Brothers bakery in Cowes) - but, Judy says, "there was a rumour that she had had a child out of wedlock".

The evidence for the identification checks out conclusively, in my view, both in name and in detailed location. The Leighs lived in a cottage behind the Temple, the 18th century folly at Swainston. The Lees in the book live in a "sham Greek Temple" on the "Swaynestone" estate:


They have just passed the entrance-gates of Swaynestone — lonely gates, unfurnished with a lodge — and the waggon stops with interrupted music at some smaller gates on the other side of the road, where the upland still rises, not in bare down, but in rich meadow, to a hanging wood, out of which peeps dimly in the dusk a small white structure, built with a colonnade supporting an architrave, to imitate a Greek temple — Alma's home.
- The Silence of Dean Maitland

The family details Judy sent me are all confirmed by census and other records. I had a browse of Ancestry.co.uk, and the 1841 census lists the occupants of the Temple as:

Ellen Leigh married George Rashley at Whippingham (near Newport) in February 1849. The 1851 census finds the Rashleys living in Whippingham with their first child Samuel (born January 1850, according to the BMD records) but it's a slightly peculiar detail that a decade later the 1861 census finds Samuel, aged 11, living not with his parents, but with his grandparents at the Temple. He grew up to be an agricultural labourer, and the 1881 finds him living at Winkle Street living with his widowed mother - presumably they were thrown out of the Temple after his grandfather died.

Over the next decade, the Rashleys had three other children, who all lived with them. I don't know if this different domestic arrangement for Samuel has any bearing on his paternity; alternatively, maybe they just had domestic problems in early marriage, and couldn't cope with a child. But it's interesting that he has the same given name as his grandfather, which suggests he could have been the model for Alma's son Ben (also named after his coachman grandfather).

Judy asked if I knew how Mary Tuttiett came to use her ancestors as characters. I don't know, except in the broadest sense; that as Maxwell Gray she regularly incorporated her own experiences into her books. By her own account, in her early years she used to accompany her GP father on his rural rounds, which included Calbourne, and at some point she must have picked up these biographical details. She was born in 1846, and The Silence of Dean Maitland was published in 1886, so the relevant part of Ellen's life happened in Mary's early childhood, decades before she incorporated the details into The Silence of Dean Maitland (which is placed at an intermediate date, with Alma's illegitimate son born in 1863).

This story is ongoing; there may be more to say. I have to admit I feel a little stupid for not having spotted the Leigh family during the research for A Wren-like Note; it shows how you can miss major details in even the most exhaustive research.

Grateful thanks to Judy Stoneley for sending me this information, and for her kind permission to cite it. 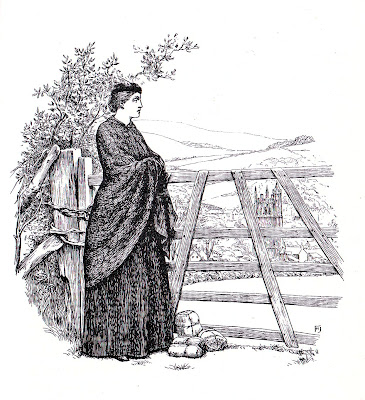 For more background, see maxwellgray.co.uk, the companion site for my biography of Mary Tuttiett, A Wren-like Note.
at 00:00