The Chines They Are a-Changin'

Another spinoff from the recent posts on 18th century Isle of Wight travelogues: the clues you can follow about landscape changes over two centuries, particularly in the chines of the 'Back of the Wight'.

One particular passage in Charles Tomkins' 1796 A Tour to the Isle of Wight appears in the section about his Western Tour, where lists the chines (coastal ravines) in the parish of "Brixton":

"Brixton" is the old name of the present-day Brighstone. Both names, as well as "Brightstone" were in the picture in the mid 19th century - for instance, William Henry Davenport Adams' 1856 The History, Topography, and Antiquities of the Isle of Wight mentions "The parish of Brixton, Brightstone or Brighstone" - but the changeover seems to have happened toward the end of the 19th century. The village is Brixton on the 1866 Ordnance Survey Map, and Brighstone on the 1898. I can't fathom the reason for sure; this seems to be one of those places where spelling interacts with pronunciation. According to Room's 2007 The Pronunciation of Placenames: A Worldwide Dictionary, "The name of the Isle of Wight village has a local pronunciation Brik stun, corresponding to the historic spelling Brixton, recorded in 1399". But if I had to guess, I'd go for the theory that the print spelling "Brighstone" got a particular boost through George Moberly's 1869 Brighstone Sermons, whose popularity shows up as a major blip in print use of the name (graph from Google Books Ngram Viewer).

As to the chines: this is an area of rapidly-eroding coastline, with chines a geologically ephemeral feature. Tomkins' list makes an interesting mix of chines that have merely changed names, chines that have demonstrably disappeared, and chines where it's a mystery what Tomkins was referring to.

Jackman's Chine seems to be simply another name for Grange Chine. Multiple accounts identify it as the chine that leads down from Brighstone to the sea, now called Grange Chine:


Grange Chine, sometimes called Jackman's
- Black's Picturesque Guide to the Isle of Wight, 1871
Below the village of Brighston is Grange or Jackman's Chine, a broad gorsy ravine, offering no very marked features
-  A handbook for travellers in Surrey, Hampshire, and the Isle of Wight, Richard John King, 1865
There is one called Jackman's Chine, which may be said to lead from the village to the bay.
- Nelson's Handbook, 1859
A stream passes through this place [Brixton] which takes its rise near Mottiston, and empties itself into the bay at Jackman's Chine
-  A General Collection of the Best and Most Interesting Voyages and Travels in All Parts of the World, John Pinkerton, 1808

Water-Gate Chine seems to have been an insignificant chine eastward of Grange Chine. Apart from Tomkins, it's mentioned in Robert Mudie's 1840 The Isle of Wight: its past and present condition, and future prospects:

Shrimp-Ledge Chine is one of many variant names:


Ship Ledge (H 7 97 NE) corresponds to Shriptege Chine 1775 M, Strip Ledge Chine 1851 M; Tomkins (2.76) mentions Shrimp- Ledge Chine (1796) and Englefield (8) calls the chine Shriptedge. The preponderance of spellings containing an r seems to indicate that Shriptedge is the least corrupt form and that the name is a compound of the dialectal word shrip 'to clip a hedge' (also 'to cut or whittle away a piece of wood, to make chips'
- The place-names of the Isle of Wight, Helge Kökeritz, 1940


.. but it no longer exists (see Google Maps and Peter Bruce's Wight Hazards).

Barns-Hole appears in a number of accounts, described as a spectacular feature:


Cowleaze Chine, Barnes' Hole (well worth the walk to see) and Grange Chine
- The New Portsmouth, Southsea, Anglesey, and Hayling Island Guide, 1859
Barnes Hole, between Cowleaze and Shripledge, is a vast chasm in the earth, with black gloomy sides, four hundred feet in height
- The History, Topography, and Antiquities of the Isle of Wight, William Henry Davenport Adams, 1856
Barnes Hole is a remarkable cavern, of extraordinary height, and most gloomy aspect.
- Picturesque Illustrations of the Isle of Wight, Thomas Barber, 1834

The location, and The place-names of the Isle of Wight, identify it as Barnes Chine, now not particularly notable in appearance (see Google Maps); presumably it's been eroded over a century.

Cowleaze Chine still exists, and has an interesting back-story. Cowleaze Chine (upper left) is an almost dry watercourse that lies adjacent to the larger and more active Shepherd's Chine (lower right), which probably didn't reach the coast at the time Tomkins was writing.

You wouldn't suspect that Cowleaze Chine was the original dominant watercourse prior to the early 1800s: you can see from the 1810 Ordnance Survey First Series. that the stream of what's now Shepherd's Chine ran coastward, then turned parallel to the coast to feed Cowleaze Chine. However, at some point in the early 1800s, a new connection formed direct from Shepherd's Chine to the sea, leaving the feeder watercourse high and dry. The 1862 OS map shows the appearance afterward: 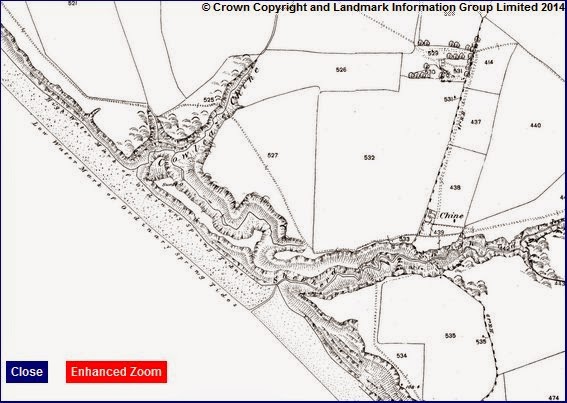 The original stream course parallel to the coast has since been obliterated by coastal erosion; now the only evidence is old maps. How the stream capture happened is debatable; a number of sources repeat this anecdote:


The stream that flows through Shepherd's chine is said to have formerly entered the sea by Cowlease chine, but a shepherd desiring to secure the eels which were to be found in the mud at the bottom, cut through the soft and narrow barrier which divides the ravines and diverted the water, with the full intention of restoring the stream to its old bed wnen he had filled his creels, but heavy rains coming on, the brook soon deepened its new channel beyond the possibility of restoration, and has, by degrees, formed a new chine, named from its unintentional creator, leaving its former course deserted and dry.
- Jenkinson's Practical Guide to the Isle of Wight (1876, Internet Archive jenkinsonspract00jenkgoog)

... but it could have happened spontaneously, due to coastal erosion cutting into the stream path to allow a new outlet. See pages 116ff in Chapter 4 of Chris Hackney's 2013 PhD thesis Modelling the Effects of Climate Change and Sea Level Rise on the Evolution of Incised Coastal Gullies. Nice story, though.

A similar situation happened further eastward, where a meandering stream more or less parallel to the cliff originally reached the sea at Ladder Chine, but successive erosion created a new path to the sea first at Walpan Chine, which in turn was left dry as another new outlet formed at New Chine.

Kings-Gate Chine isn't findable outside the Tomkins book either.

Another well-documented and spectacular coastal feature, not mentioned by Tomkins, was Dutchman's Hole, which was somewhere near the outlet of Grange (aka Jackman's) Chine:

This too no longer exists.