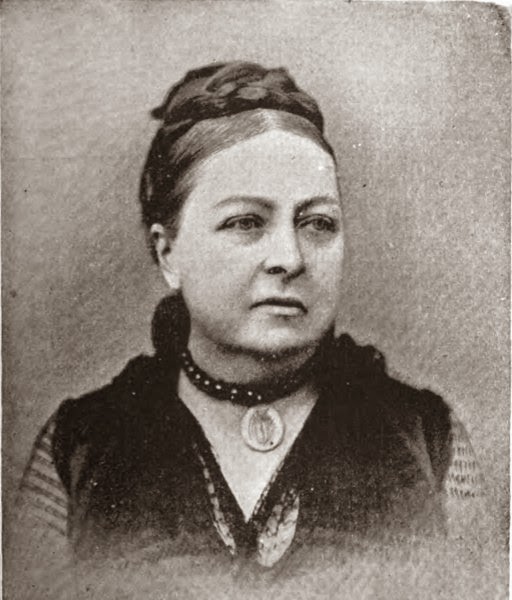 The Hon. Mrs Henry Chetwynd ("from a photograph. Author of A Brilliant Woman, etc).
This is the Scottish author Julie Bosville Chetwynd née Davidson. Married to a naval officer, she began writing when her husband was stationed overseas and "felt the solitude of the long evening to be so oppressive after the little ones were gone to bed, that for distraction she took to her pen", and subsequently wrote a dozen or so novels drawing on her life and travels. Helen C Black's 1906 Notable Women Authors of the Day has a rather cosy biographical sketch (pp 247-259), which mentions biographical trivia including the "severe accident at Rugby Station" that affected her health in later life, and her invention of a fire escape (here's the US patent US501455 A - it's a balcony hoist).
See Internet Archive (creator:"Chetwynd, Henry Wayland, Mrs., d. 1901") for her works. 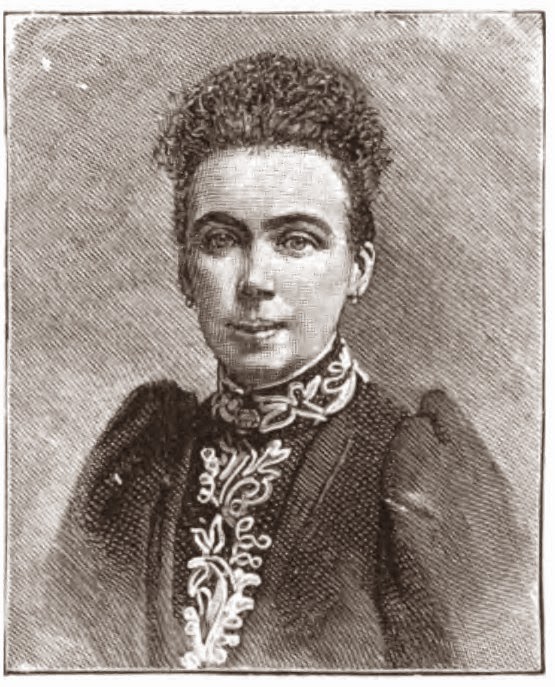 Miss Edna Lyall ("from a photo, by Lewis, Eastbourne. Author of Donovan, etc").
"Edna Lyall" was the pen-name of the Brighton-born Ada Ellen Bayly, author of eighteen novels. The account in the 1906 Notable Women Authors of the Day (pp 133-144) isn't wildly enlightening, but a look at the Oxford Dictionary of National Biography finds she had a generally quiet life, living with her married sisters, and writing novels that reflected her combination of strong religious belief with liberal politics, with interests in causes including Irish Home Rule, the defence of the freethinker Charles Bradlaugh, and opposition to the Boer War. The plots seem to have been frequently melodramatic:


Edna Lyall is partly to blame for having introduced this habit of torturing the poor hero both physically and mentally to such as fearful extent that the reader can only feel relief when the end of the third volume is reached.
- Daily News, 25 July, 1889

In 1886 she was forced to reveal her identity, due to an impostor and rumours that "Edna Lyall" was in a lunatic asylum; this experience informed her 1887 Autobiography of a Slander. There's a contemporary biography, JM Escreet's The life of Edna Lyall (Ada Ellen Bayly) (Internet Archive lifeofednalyalla00escrrich).
See Internet Archive (creator:"Edna Lyall") for her works. 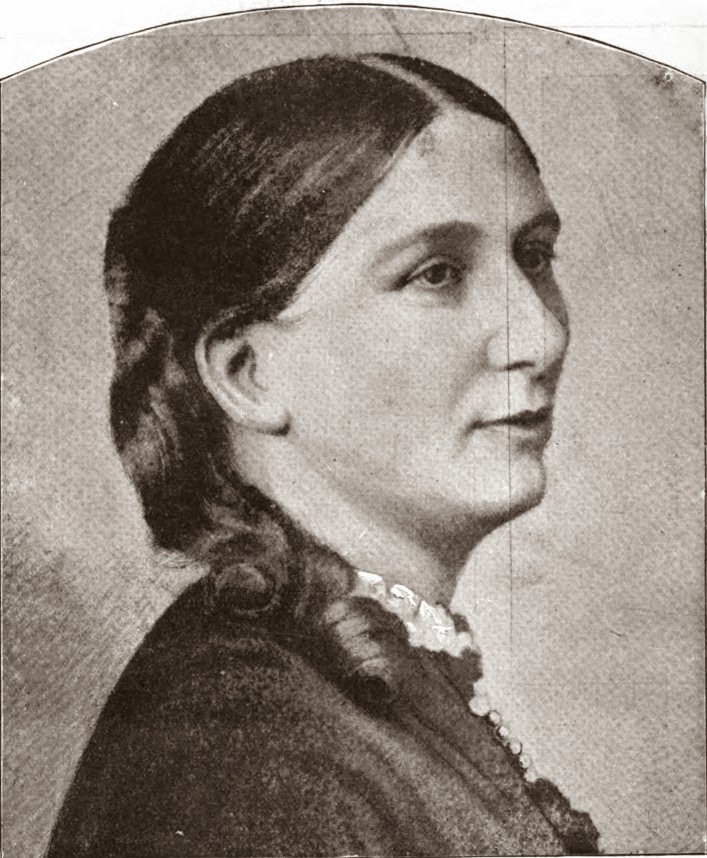 Mrs. Riddell ("from a photo by Barraud. Author of Maxwell Drewitt, etc").
This is Charlotte Riddell aka Mrs J.H. Riddell ("one of the most popular and influential writers of the Victorian period. The author of 56 books, novels and short stories, she was also part owner and editor of the St. James's Magazine, one of the most prestigious literary magazines of the 1860s" - Wikipedia). Her Irish origin influenced themes of many of her works, which included respected novels and stories in the ghost story genre, but she also wrote about London and commerce - an angle that the Dictionary of National Biography considered innovative for the English novel. She's in Notable Women Authors of the Day (pp 11-25), but probably the best source around is Michael Flowers' website charlotteriddell.co.uk.
See Internet Archive (complicated search redacted) for her works. 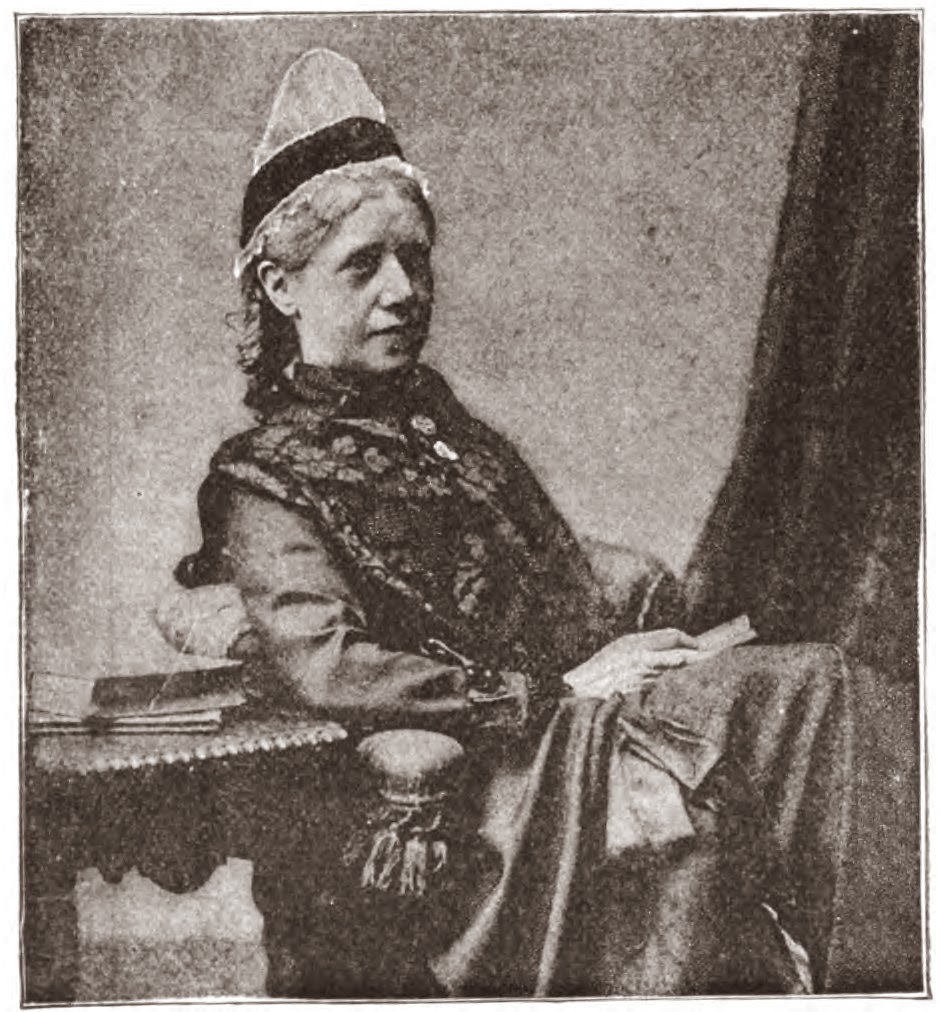 Miss Hesba Stretton ("from a photograph. Author of The Lord's Purse Bearers, etc").
Hesba Stretton was the pen name of the Shropshire-born Sarah Smith.


Smith was one of the most popular Evangelical writers of the 19th century, who used her "Christian principles as a protest against specific social evils in her children's books".
- Wikipedia

She's one of the those Victorian authors whose works, to modern sentiments, have excruciating religiosity - nevertheless, it was directed to good intent, and she did worthy work for slum children in Manchester, and was a co-founder of the the London Society for the Prevention of Cruelty to Children, later incorporated into the NSPCC.
See Internet Archive ("hesba stretton") for her works. Not all are children's works: The Highway of Sorrow looks interesting, taking as its theme a little-known episode of history: the persecution of the Shtundists - a Ukrainian Protestant sect - in late 19th century Russia. 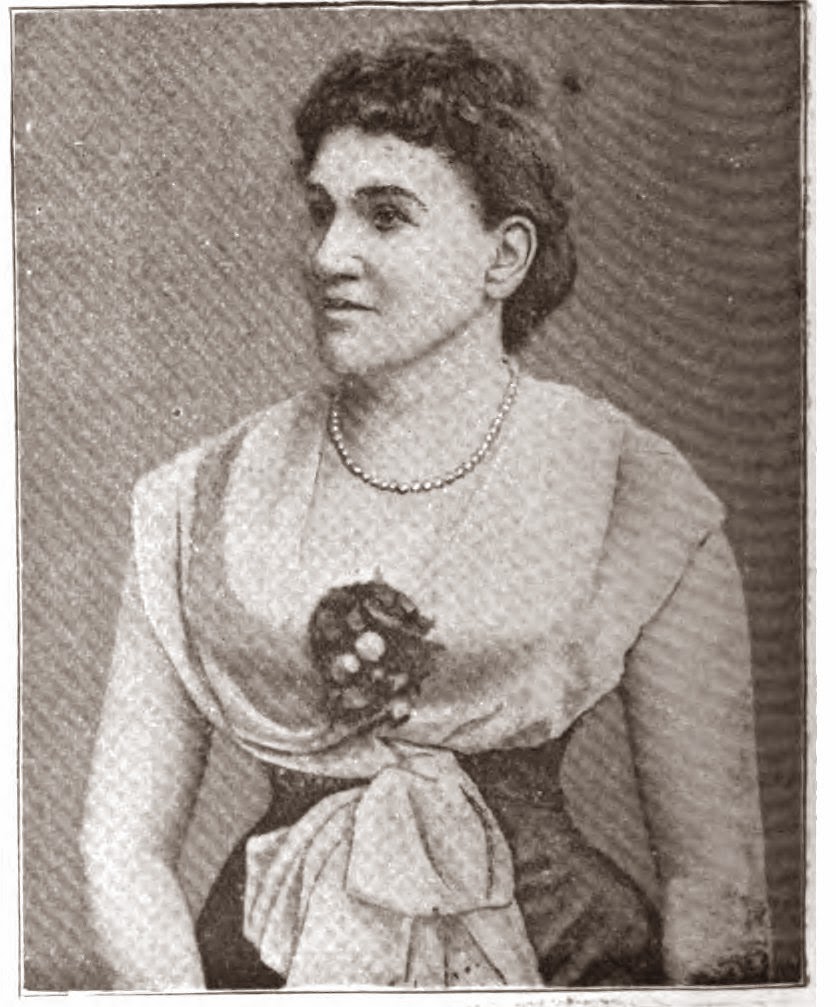 Miss Florence Marryat ("from a photo, by the London Stereoscopic Company. Author of Peeress and Player, etc").
Florence Marryat was an author and actress, daughter of the sea story writer Captain Marryat. She had a high-achieving career, with a spot of flakiness: 70 books (including sensational novels on heavy themes such as domestic abuse) and many other writings; a comedy double act with George Grossmith; many stage appearances with the D'Oyly Carte; a one-woman show; running a school of journalism; and, in later life, books on spiritualism and seances (which remain, probably unfairly) her best-known works. She's in Notable Women Authors of the Day (pp 81-96) - a publication I'm rapidly grasping to to be the Hello! magazine of late-Victorian women writers - but her life isn't well-documented; the site Florence Marryat (1833-99) - novelist, playwright, actress, singer, spiritualist attempts to draw together the threads.
See Internet Archive (florence marryat) for her works, which include the multi-volume Life and Letters of Captain Marryat. It's disappointing, given the publication date, that her 1897 vampire novel The Blood of the Vampire isn't online. 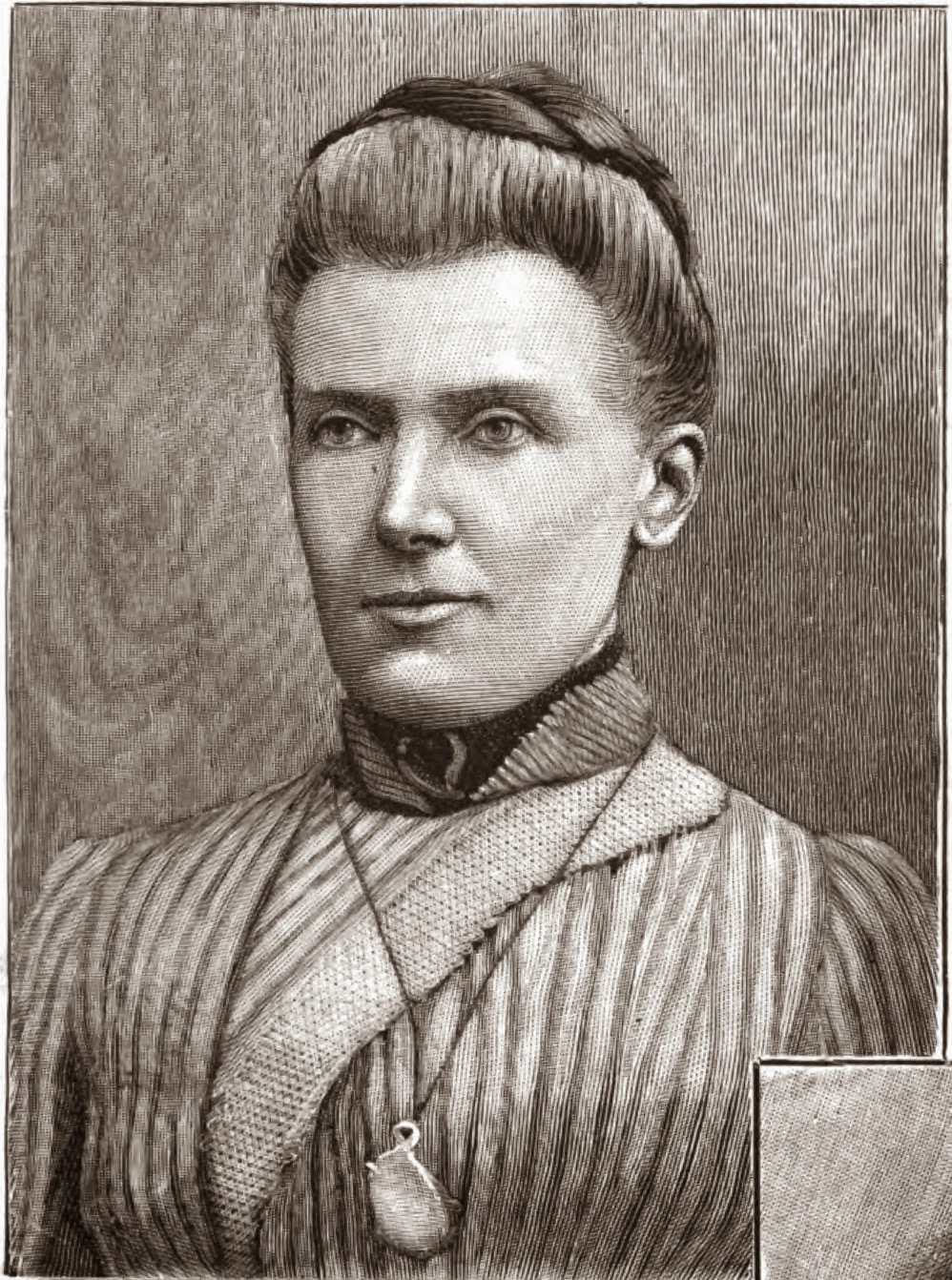 Miss Rhoda Broughton ("from a photo, by Barraud. Author of Not Wisely, but Too Well, etc").
Rhoda Broughton was a popular and successful novelist and short story writer, Welsh-born with roots in minor aristocracy (and a niece of Sheridan La Fanu). She wrote 20+ novels, unlike many authors shifting successfully from the early Victorian "three-decker" format to single-volume books.


[She] won success and notoriety because of their "fast" heroines, young ladies with a taste for daring and rapturous flirtations in lush pastoral surroundings.
- Victorian Poetry, Volume 15, p79, 1977

.. and the Oxford Guide to British Women Writers (1993) comments that her later popularity suffered from this early reputation staying attached. Notable Women Authors of the Day (pp 37-43) has the usual biographical sketch.
See Internet Archive (creator:"Rhoda Broughton") for her works. 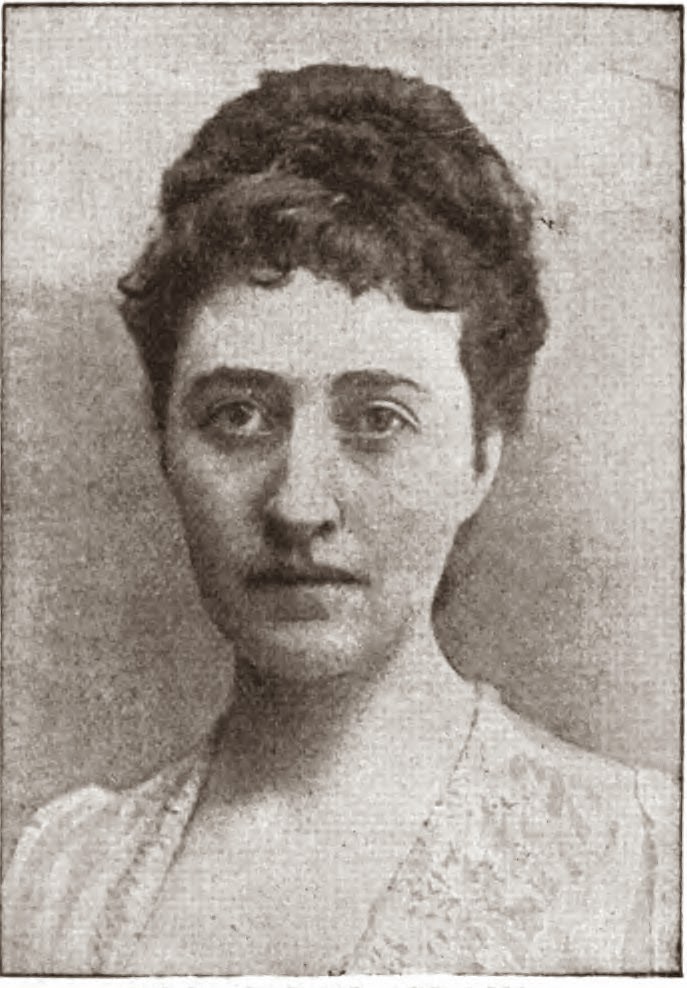 Mrs. Sarah Grand ("from a photo, by Birtles, Warrington. Author of The Heavenly Twins, etc").
This is Sarah Grand, "feminist writer active from 1873 to 1922. Her work revolved around the New Woman ideal - Wikipedia). Born Frances Elizabeth Bellenden Clarke and later married to a Mr McFall, she took the pen name Sarah Grand on the publication of her second novel. She had an eventful life, with strong involvement in issues of women's rights, including sexual health. She was expelled from school for organising groups supporting protests against the Contagious Diseases Acts, which focused on persecuting prostitutes as a measure against sexually transmitted diseases; and her novel The Heavenly Twins was notorious for tackling the theme of syphilis. There's a good summary of her life and work at Victorian Secrets: Sarah Grand. and Notable Women Authors of the Day has a chapter on her (pp. 320-328).
See Internet Archive (creator:"Grand, Sarah") for her works; these include not merely novels, but some of her articles on issues of the "New Woman". 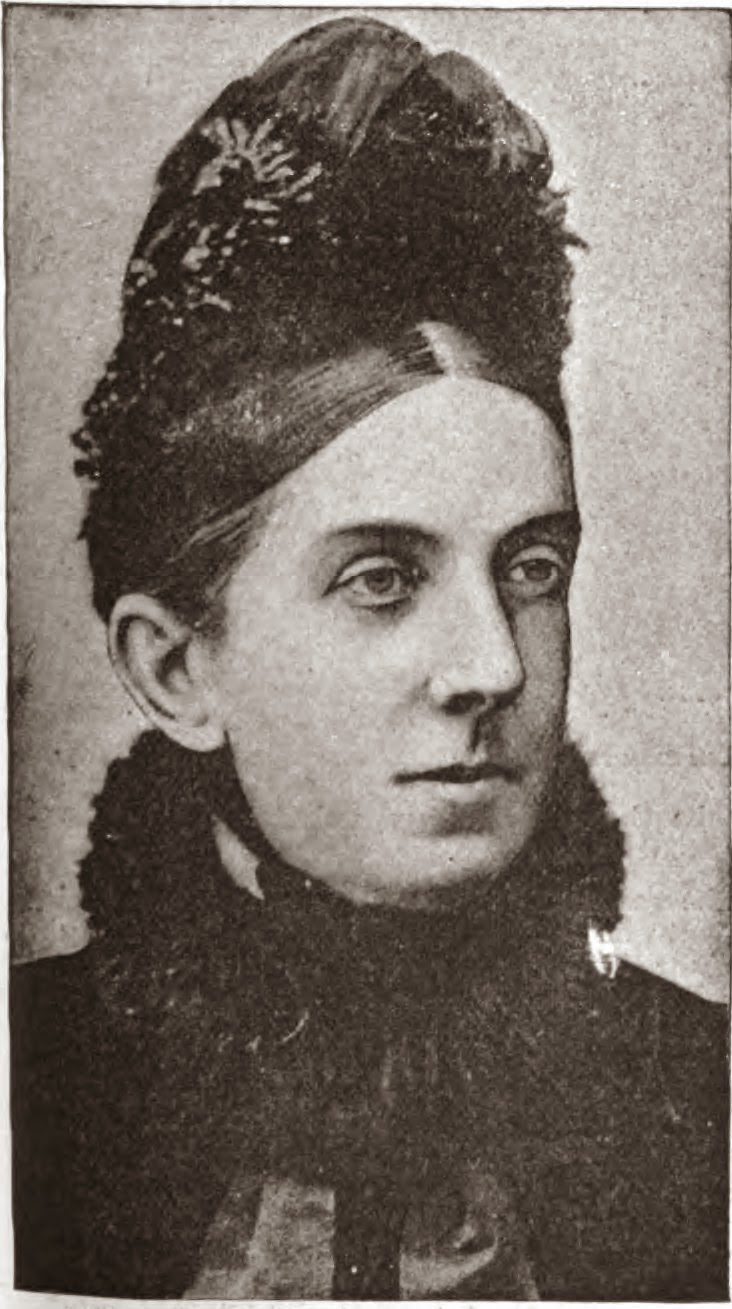 Miss Rosa Nouchette Carey ("from a photo by S. Poole & Co. Author of Robert Ord's Atonement, etc").
Rosa Nouchette Carey was an English novelist who largely wrote pious, safe, improving fiction on domestic themes, aimed at middle-class urban young female market. She did, however, tackle heavy topics in some of her works ("her 1869 novel Wee Wifie features vitriol-throwing, opium addiction, and hereditary insanity" - Wikipedia). Apart from 33 novels, her work also included serials for the Girl's Own Paper and non-fiction such as the biographical collection Twelve Notable Good Women of the XIXth Century. See
Notable Women Authors of the Day for a biographical sketch (pp. 145-156); Victorian Secrets also has a good introduction - Rosa Nouchette Carey.
See Internet Archive (creator:"Carey, Rosa Nouchette, 1840-1909") for her works. 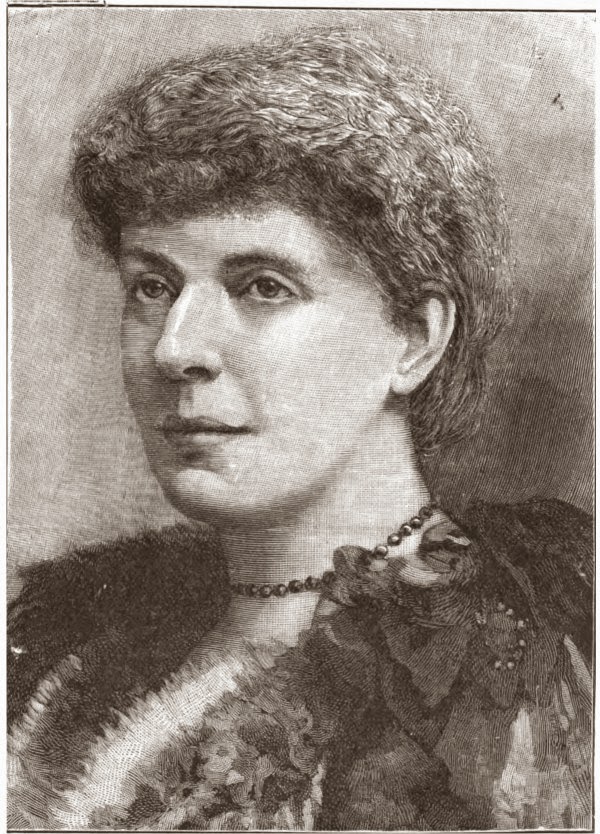 Mrs WK Clifford ("from a photo by Van der Weyde. Author of Anyhow Stories: Moral and Otherwise, etc")
This is the novelist and journalist Lucy Clifford. I've mentioned her previously - see Cautionary Tales - but it'll do no harm to recap.

Although she wrote much more, she's particularly remembered for her very scary story The New Mother, a fable in which a brother and sister are incited to naughtiness by a strange girl they meet after the fair has been in town. Their mother threatens that if the naughtiness continues, she will go away and they will get a new mother "with glass eyes and a wooden tail". This comes from Anyhow Stories, Moral and Otherwise (Macmillan, 1882) which included The New Mother.  Other works were, for their time, considerably groundbreaking, such Mrs Keith's Crime, which concerns an ailing young widow who makes the considered decision to kill her also-consumptive daughter; and Aunt Anne, the sympathetic story of a woman of 68 who is taken in by an adventurer of 27 who marries her. Charlotte Moore, writing in the Guardian (Mind the gap, Wednesday May 22 2002) reads another Clifford story, Wooden Tony, as a description of autism, suspecting it to be based on first-hand knowledge. From outside the world, the story of a girl who doesn't relate to human concerns, could also be interpreted in that light.

She was married to the mathematician William Kingdon Clifford for the four years before his death; despite the briefness of their time together, they were one of the fun intellectual couples of the 19th century: see William and Lucy Clifford.
See Internet Archive (creator:"Clifford, W. K., Mrs., d. 1929") for her works.