Further to the previous post about Charles Tomkins' 1796 A Tour to the Isle of Wight: a handful of topographic accounts mention an interesting landform at Steephill, Isle of Wight, called the Devil's Bridge.

The first reference I can find is in the 1823 edition of John Albin's A Companion to the Isle of Wight, whose author describes it as being in the grounds of the cottage of the late Earl of Dysart (Wilbraham Tollemache):


Steephill is seated on a terrace near the foot of the great cliff. Some wood and much rich shrubbery grow round the house, and adorn the masses of rock, which everywhere start from the uneven surface. One of these, called the Devil's bridge, is in form, colour, and position, as romantic as can be conceived. It lies projecting nearly horizontally from a bank, is of a very great size, and the strata being of different hardness, the lower parts are so worn away, that the upper part overhangs like a vast cornice, and in this there is an excavation deep enough to afford room for a bench quite covered over head, and accessible by a rude staircase built against its flank. Ivy winds over its surface, and shrubs clothe its sides.
- A Companion to the Isle of Wight, John Albin, Longman & Co, 1823 (Internet Archive companiontoisleo00albi)

It's mentioned again, this time with a print, in volume 2 of Charles Tomkins' A Tour to the Isle of Wight: 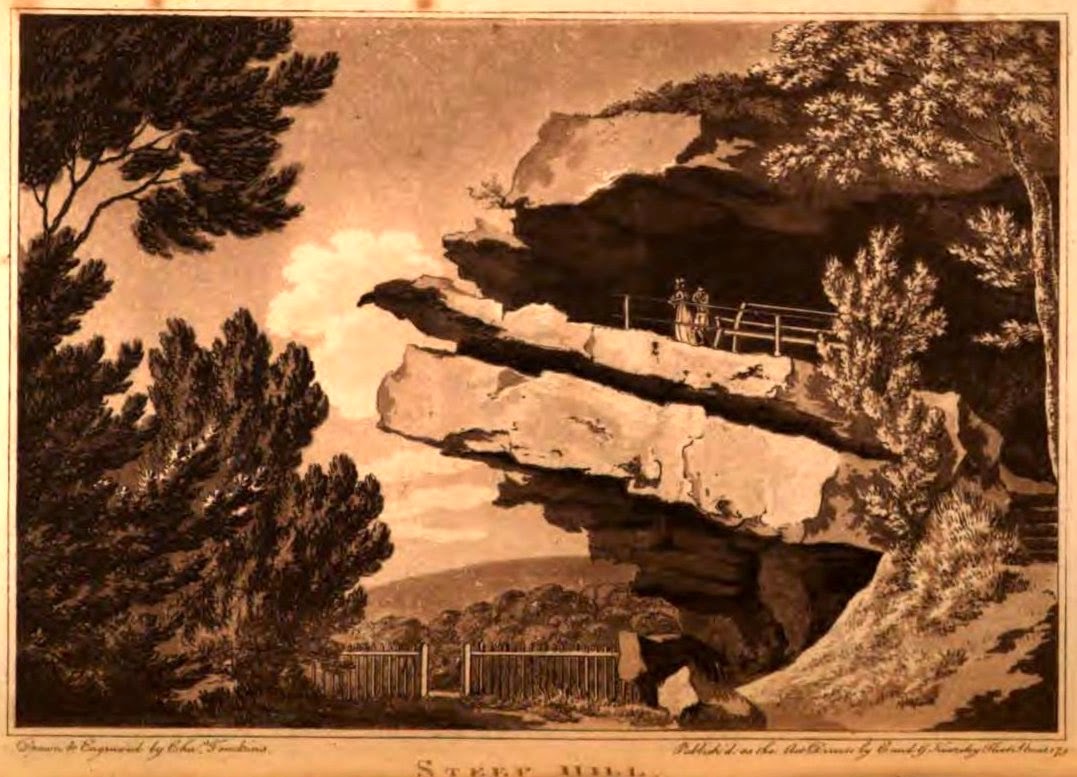 In the view of Steephill, is introduced a curious rock, called the Devil's Bridge. In a chasm of the rock, is placed a seat, the approach to which, is by a rude flight of sleps. From this situation, you overlook the house and grounds, and have a full sea view. The house is perfectly in unison with the grounds, and does great credit to the taste of its owner.
- A Tour to the Isle of Wight, Volume 2, Charles Tomkins, pub. G Kearsley, London, 1796 (Internet Archive atourtoislewigh01tomkgoog).

It looks ready to fall down at any time, but it was still being described at the beginning of the 20th century, getting a mention (though unfortunately not a photo) in John B Marsh's account of Steephill Castle (built on the site of the Tollemache cottage), written for private publication for its tycoon owner John Morgan Richards ...


As though to omit no feature of natural beauty, nature has provided a freak of strata in the cliff north of the Castle, which has been christened by the unromantic name of "the Devil's Bridge." This projects horizontally from the cliff like a natural cornice, and being of a harder strata than that immediately below, there exists a cavern beneath large enough to allow of the construction within of a sheltered bench for the curious in search of the picturesque. Ivy winds about the sides of the cavern, and shrubs clothe the cliff above and around. There is a rude staircase by which the place is reached; and from this point the view of the rolling cliffs, and valleys, with the sea beyond, is remarkably fine.
- Steephill Castle, Ventnor, Isle of Wight, the residence of John Morgan Richards, Esq.; a handbook and a history (John B Marsh, 1907, Internet Archive steephillcastlev00mars)

... though the phraseology is so obviously ripped off from Albin that you wonder if Marsh or Richards had ever actually seen the thing. Nevertheless, Richards endorsed the detail in his 1914 memoir Almost Fairyland.


A distinguished journalist visiting her after the completion recently wrote for the Lady's Pictorial a description of Steephill which is quite comprehensive and explains its attractions and points of interest
...
"Part of the grounds are wild, and a fine effect is secured in one by a freak of the strata of the cliff projecting horizontally and known as the Devil's Bridge"
- Almost Fairyland, personal notes concerning the Isle of Wight, John Morgan Richards, pub. John Hogg, London, 1914

Old Ordnance Survey maps - see 1898 and 1909 below - give no indication of its location in the Steephill grounds (despite identifying other features such as "sun dial"). But if the John Morgan Richards accounts are accurate, it survived the 1900 cutting of the now-defunct railway serving the Ventnor West station.

So, is there any trace of Devil's Bridge remaining? Steephill Castle was demolished in 1963 (see The forgotten castle, David Paul, Wight Life) and the grounds divided up and sold for residential use. The Devil's Bridge itself looks a Health & Safety nightmare, and likely to have long since collapsed or been pulled down. But is the rock of which it formed a part still lurking in the undergrowth somewhere, like Undermount Rock in Bonchurch? Tracing its fate could be an interesting project. It would have been somewhere in this vicinity: