Cliff and Beach at Branscombe: review

I don't normally buy local history books, but I made an exception with Cliff and Beach at Branscombe (Barbara Farquharson & Sue Dymond, Branscombe Project, 2014), as it concerns an area that has particularly interested me since moving to East Devon. 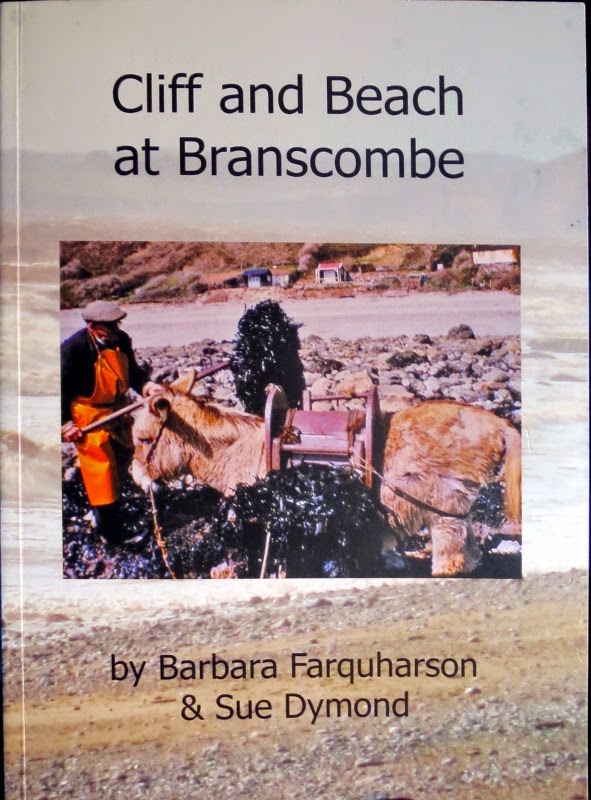 The book isn't just about Branscombe, but is more broadly concerned with the whole stretch of cliffland and beach between Sidmouth and Beer Head; its particular focus, however, is on the history of those parts historically devoted to 'plats': cliff-ledge farming plots. Surprisingly, this turns out to be a historically ephemeral activity, spanning only about a century from the 1840s.

The book takes a relative fast-track through the geology and pre-history of the area, as well as its many other activities that have been documented elsewhere (e.g gypsum, quarrying, lime burning), and not forgetting smuggling (for which it provides solid documentation, not the usual assumption that any out-of-the-way cave or coastal valley must be smuggling-related).

The bulk of the book, however, is devoted to a study of cliff plat farming, and this it does brilliantly, both through hard statistics (via tithe maps and census records), historical descriptions from visitors and residents such as Peter Orlando Hutchinson, and the more human side in the form of accounts collected from surviving farmers and their relatives. The authors haven't been afraid to side-track when an interesting angle comes up, such as the legal disputes concerning occupancy of the constantly-shifting plots; a possible scam involving non-existent gypsum mines; and the stories of the donkeys used to haul seaweed up the cliff to the plats. 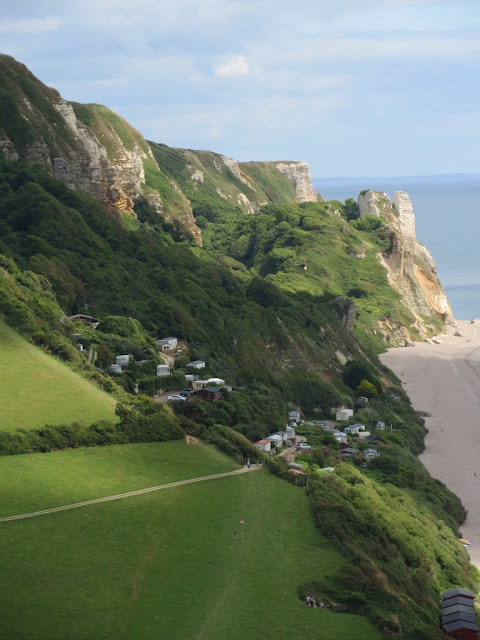 The story continues to be interesting, and even controversial, as it moves into recent decades, commercialisation (for instance, the coal yard at Branscombe Mouth becoming the Sea Shanty Cafe) and the transition of farm plots into holiday venues. Readers will be aware that the East Cliff at Branscombe (image right) has a mobile home park on the former plats, but the far less regimented development at Littlecombe Shoot is lesser-known: a fascinating and probably unique landscape. (I took a small and unsystematic glance at it in 2014 - see Littlecombe Shoot: down among the plats).

Here, the book covers a controversy I wasn't aware of: the tension between 'stakeholders' in the region, with two of the major ones inimical to the holiday chalets at Littlecombe. Natural England's remit is primarily about biodiversity and an aesthetic that doesn't favour man-made structures. The National Trust has proven hostile to all human occupation (it destroyed similar huts at Weston Mouth) and its policy has been to let the plats revert to overgrown cliffscape, except at the odd managed plot (see Weston Plats revisited). Both groups have, furthermore, interpreted the Shoreline Management Plan guidelines of "inaction" on this stretch of the coast as meaning that chalet owners were not to conduct repairs of building and revetments after storms.

The authors of Cliff and Beach at Branscombe argue strongly - and rightly, in my opinion - for the minority view of the AONB (Areas of Outstanding Natural Beauty), whose stance is described as recognising that "there's very little in the English landscape that is entirely 'natural'", and that venerable human occupation and land use is as much part of landscape as 'natural' factors.

There is, the authors conclude, a hopeful note in that Natural England has committed to the European Landscape Convention 2000, that defines landscape as "interaction of natural and/or human factors", and that the Shoreline Management Plan has been perfectly capable of adaptability in areas such as Poole/Christchurch (which, as SMP2 puts it, has "distinct and considerable value to man in the present day"). You do wonder, however, whether it'll be as keen to adapt to protect a few cliffside shanties of relatively low commercial value.

Cliff and Beach at Branscombe is a good-quality paperback, well-supported with maps and illustrations that include some pleasant paintings by John White (1851-1933), who lived in Branscombe for about twenty years (see Google Images for examples of his atmospheric works).