Concluding the gallery of the 70+ images from The South Devon Coast (Charles G Harper, London: Chapman & Hall, 1907, Internet Archive ID southdevoncoast00harpgoog). As I've said, Harper's self-illustrated travelogue is rather more personal and candid than the usual run of such books. The final set of scenes takes us round the coast of the South Hams to Plymouth.

I'll leave the topic with his outro, when he comes to the Hamoaze and a wistful conclusion:


Sir John Rennie, who designed and built the massive range of the Victualling Yard, built for all time . There are fifteen acres of it; comprising cattle-lairs and cold-meat stores, gigantic corn and flour stores, bakeries, rum stores, and dozens of other departments from which the Navy is supplied.

Beyond the yard, the long creek, infinitely muddy, of Stonehouse Lake opens out, and, across the entrance, the military headquarters. Mount Wise; semi-rural in appearance, its grassy slopes crowned by signalling station and semaphore. The name of ''Mount Wise,'' is no satirical nickname holding up to ridicule the invincible incapacity of the War Department, but a survival from the time of Charles the Second, when the Wise family owned the place. Another survival here is the wooden signal semaphore, last of a line of thirty-two that formed a "telegraphic" communication between Plymouth and London in the days before the electric telegraph was invented. To apply the term ''telegraph" to a series of wooden semaphores sounds grotesque, but it is on record that the arrival of Napoleon as a prisoner in Plymouth Sound, in 1815, was "telegraphed" to London in fifteen minutes.

Here we are come to the great dockyard, forming, with its recent extension at Keyham, a continuous frontage facing the Hamoaze, of over two miles. I suppose there are some five thousand men employed hereby the Government in the building and repairing of ships : a vast development since 1691, when ''Plymouth Dock" was first established. ''Plymouth Dock" the neighbourhood remained until 1824, when the town that had sprung up around the dockyard received the newly-coined name of '' Devonport."

The steamers call at North Corner, hard by the dockyard, where the grim streets of Devonport, rich in pawnbrokers' shops and public-houses, dip down to the water, and dozens of naked boys splash about on summer days in a longshore mixture of sea water, mud, orange-peel, corks, and all the miscellaneous flotsam and jetsam of a great town.

North Corner is a busy place, and from the steamer pontoon you look out upon all the activities of the Hamoaze, with perhaps a great modern battleship close inshore, come home, weather-stained, from a long commission, and flying, from her topmost truck, for all to notice, the paying-off pennon ; a ribbon of amazing length, reaching to the waterline. Sailors, overjoyed to be home again, come ashore with kitbags like great bolsters on their shoulders, and look so bronzed, healthy and happy that you are struck with astonishment when, in some lowering, beetle-browed waterside tavern, you hear them grumbling and advising civilian and shore-going friends, with blazing emphatics, "Don't you never wear three rows of tape round your neck," which is a highly technical way of saying, ' Don't join the Navy," the blue-jacket's jumper being ornamented with three thin white lines.

"A.B.'s no bloomin' catch. All right for petty orf'cer or articifer, fine thing to be a snotty, or a lewtenant, an' finer to be captain, or one o' them admirals what ye see in the photograph shops, cuddlin' their telescopes under their arms, and lookin' as if they'd just come out o' Sunday School; but — well, here's yours, my sonny."

Past North Corner and the steam-ferry across the Hamoaze to Torpoint in Cornwall, you come to Bull Point, where the explosives live, and to the poor discarded ships of the Navy.

Here are tiers of vessels ; steel-built cruisers, gunboats, torpedo craft, and what not, at their last moorings, and presently to be sold out of the navy for the price of an old tin kettle.

There is nothing more pitiful in all this world of activity than the sight of these discarded ships of our modern navy. The old wooden men-o'-war, out-of-date long generations ago, are still things of a worshipful nobility. Even the blackened coal-hulks and the floating station of the Harbour Police have the remains of a majestic presence ; but the obsolete cruisers and other vessels of the present iron age are dreadfully abject and mean. They have been in every clime, and on many a distant station have upheld the dignity of the Empire, and so have a claim upon our respect ; but no worn-out boiler or discarded kitchen-range, among the rubbish-heaps of a builder's yard, looks so utterly and unromantically sordid. For myself, I want to be impressed ; I acutely wish to read romance and the pathos of neglect into these discarded things of iron and steel, that have carried the King's commission over all the seas of the habitable globe and are now struck off the effective list, even though they be not more than twenty years old; but I find it impossible. I could as easily — nay, could with greater ease — drop a salt tear over the old kitchener that has cooked me many a dinner, and now lies rusting in the garden.

The ships look so small; and their sides and decks are red with rust-stains. When quite deserted they are even more than abject, and resemble floating scrap-heaps, but when some solitary figure of a marine is perceived, in charge, pipe in mouth, and clad in the extraordinary deshabille of undress that only a soldier will descend to when removed from the eye of command, and with intimate articles of his under-clothing drying in the sun, they wear the look of sea-going slums. Figures and statistics do not commonly impress me; you can make so much play with an extra 0 or two, but here are cruisers that have cost £150,000 a-piece which will each fetch at auction only a trifling £5,000, and for the mere look of them, would seem to be extravagantly dear at £500; and when I think of these things, I am very much impressed indeed.

The Hamoaze between St. Budeaiux on the Devonshire, and Saltash on the Cornish, shores, becomes the Tamar, and narrows to something a little less than half a mile wide. It is spanned here by the famous Saltash Bridge, built by Brunel to carry the railway across, and opened in 1859, For eleven miles above the bridge, the Tamar is navigable at high tide by small steamers, past Cargreen, to Calstock, and past Morwellham Quay, to Weir Head. Beyond, where New Bridge carries the highway across, Devon and Cornwall join hands. 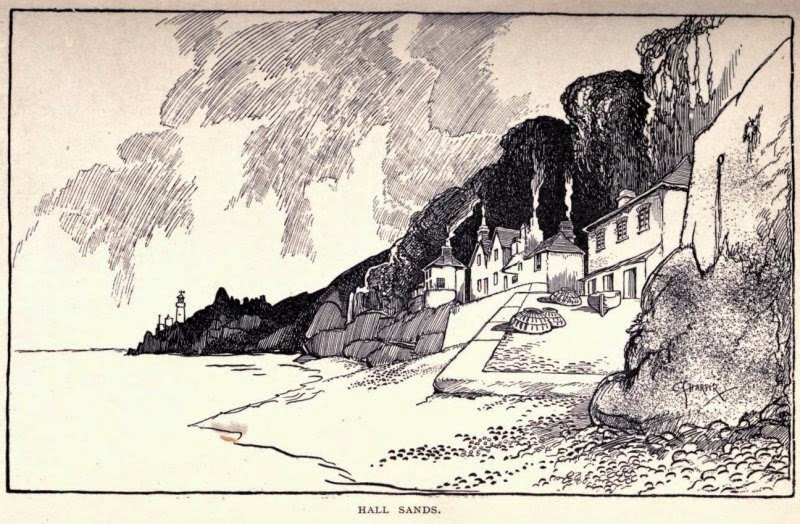 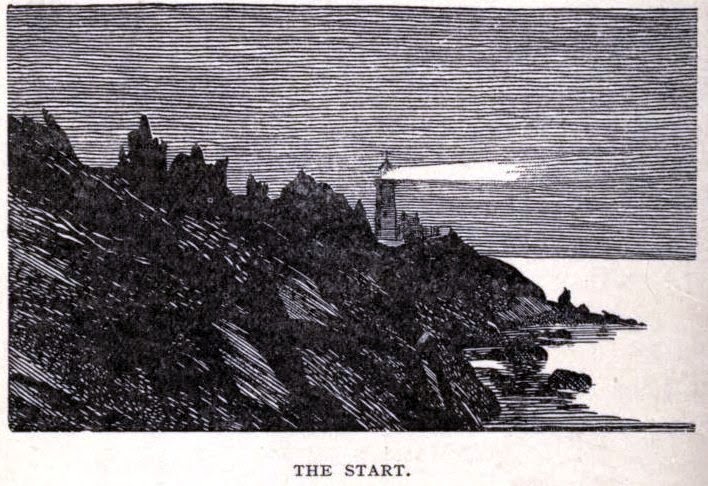 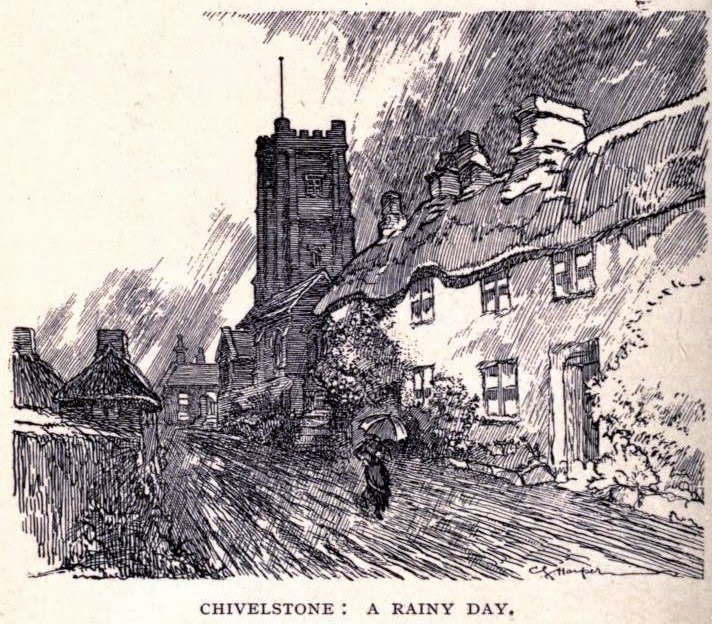 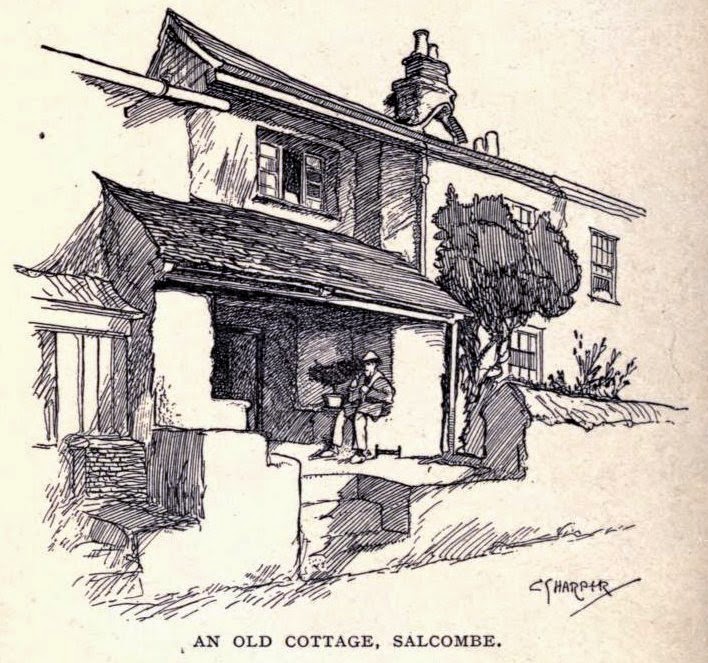 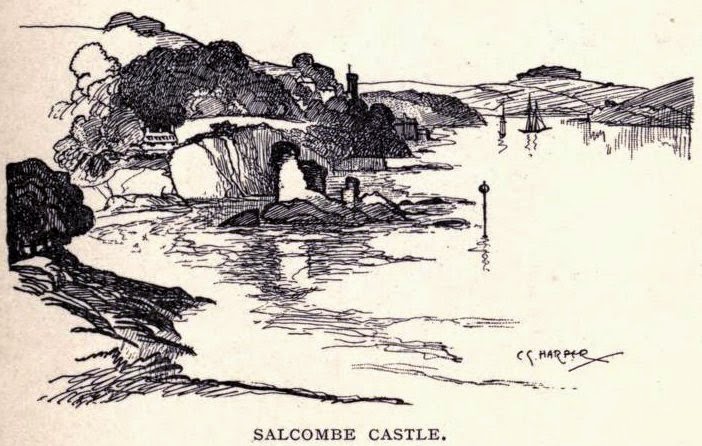 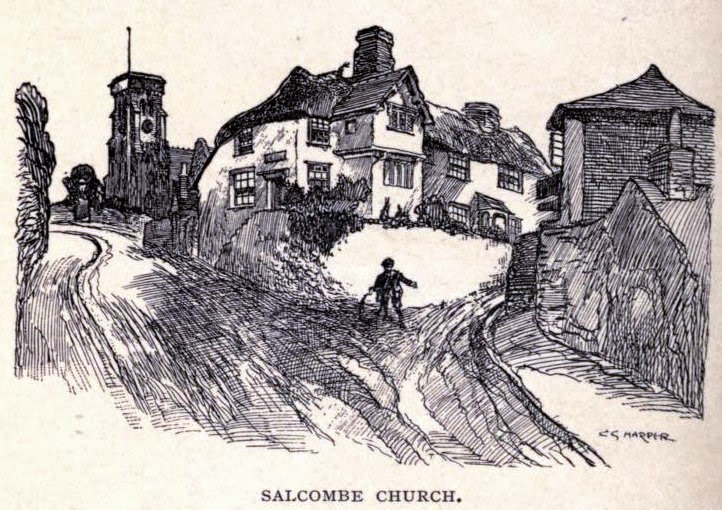 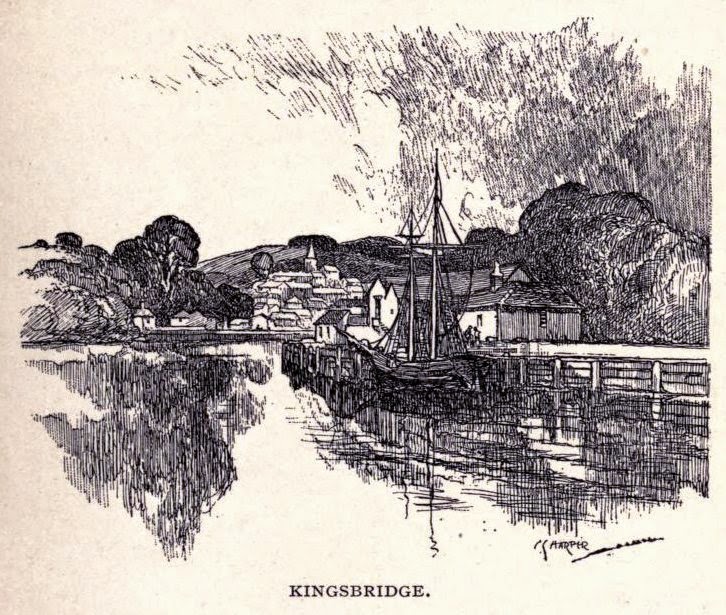 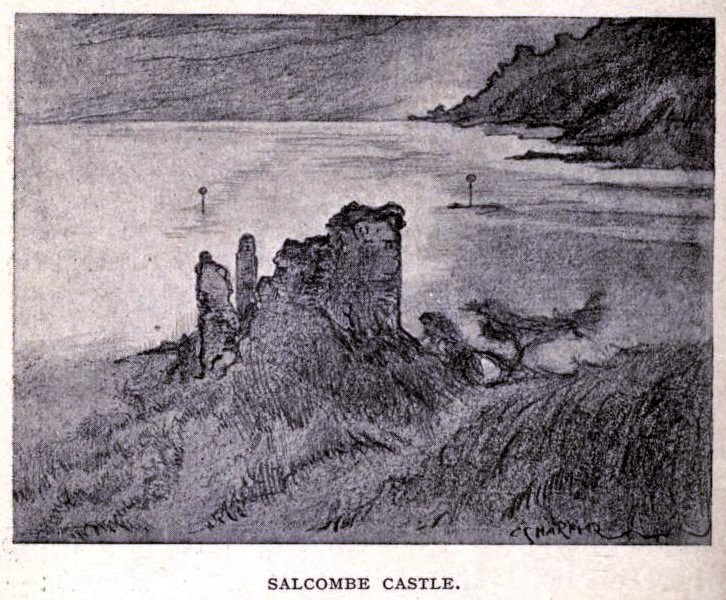 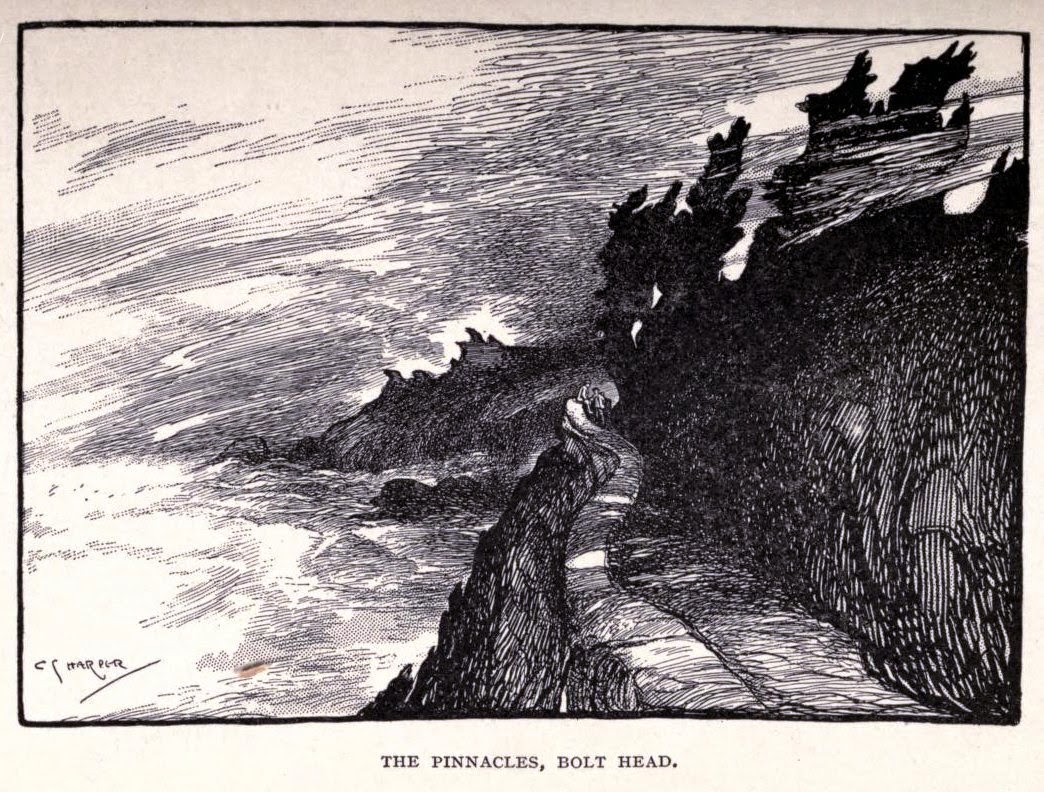 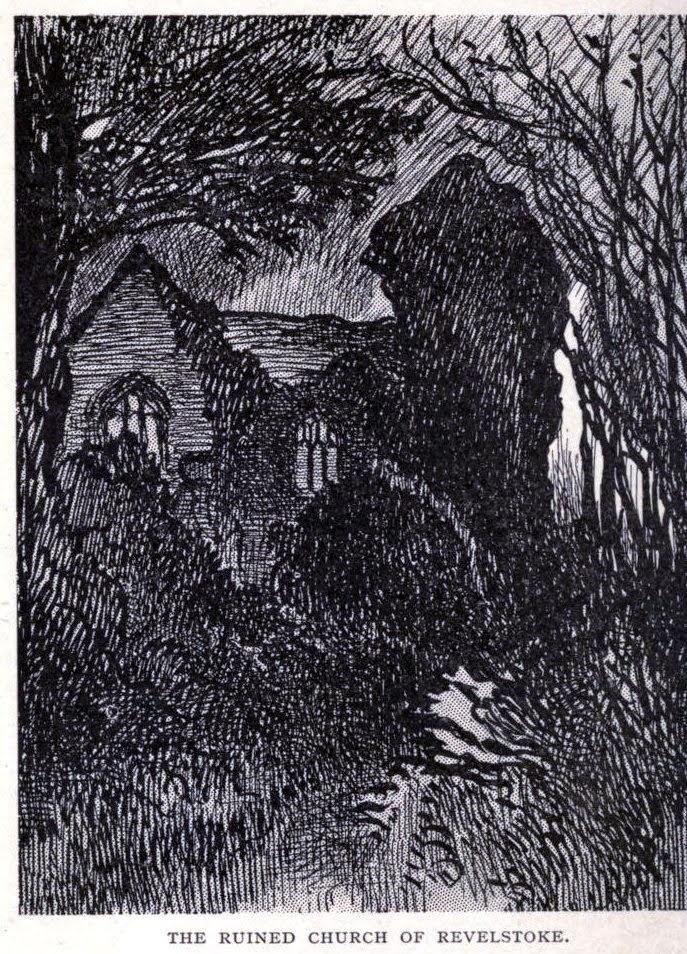 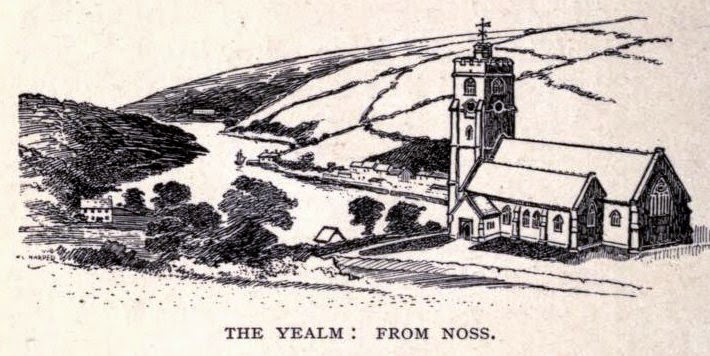 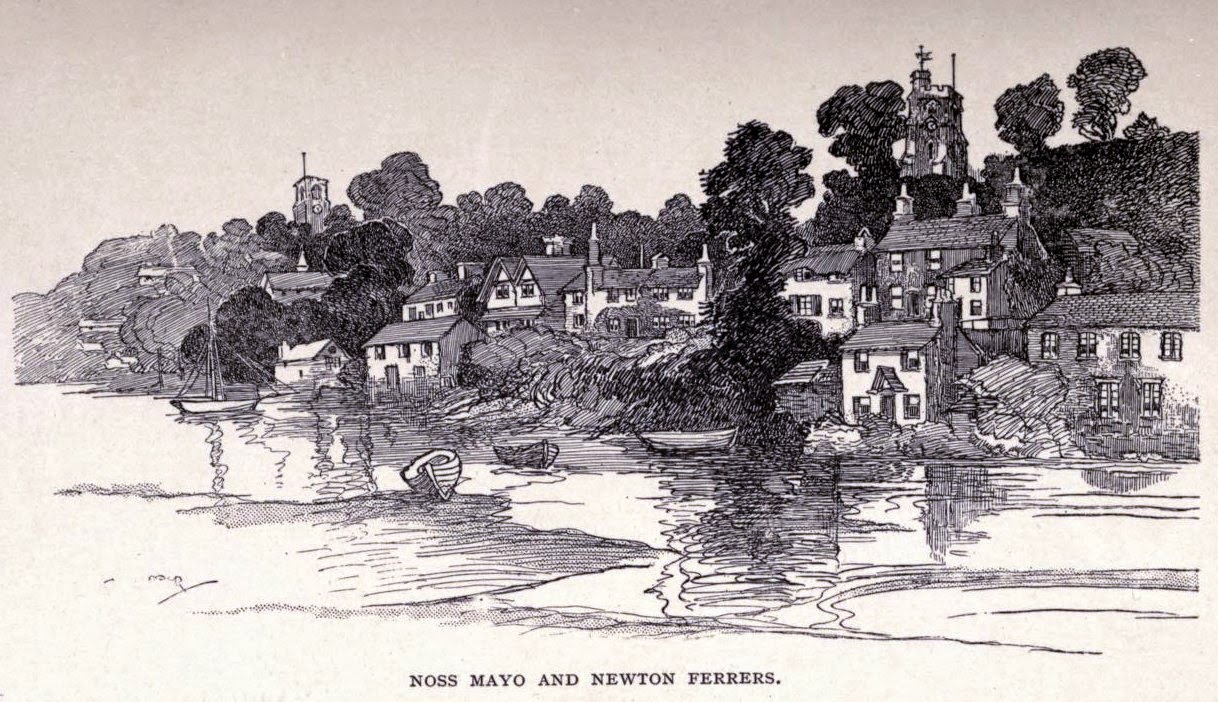 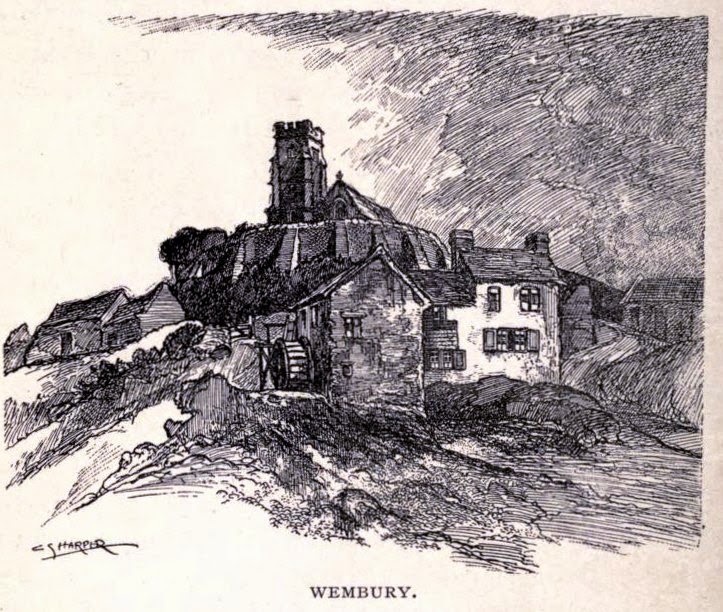 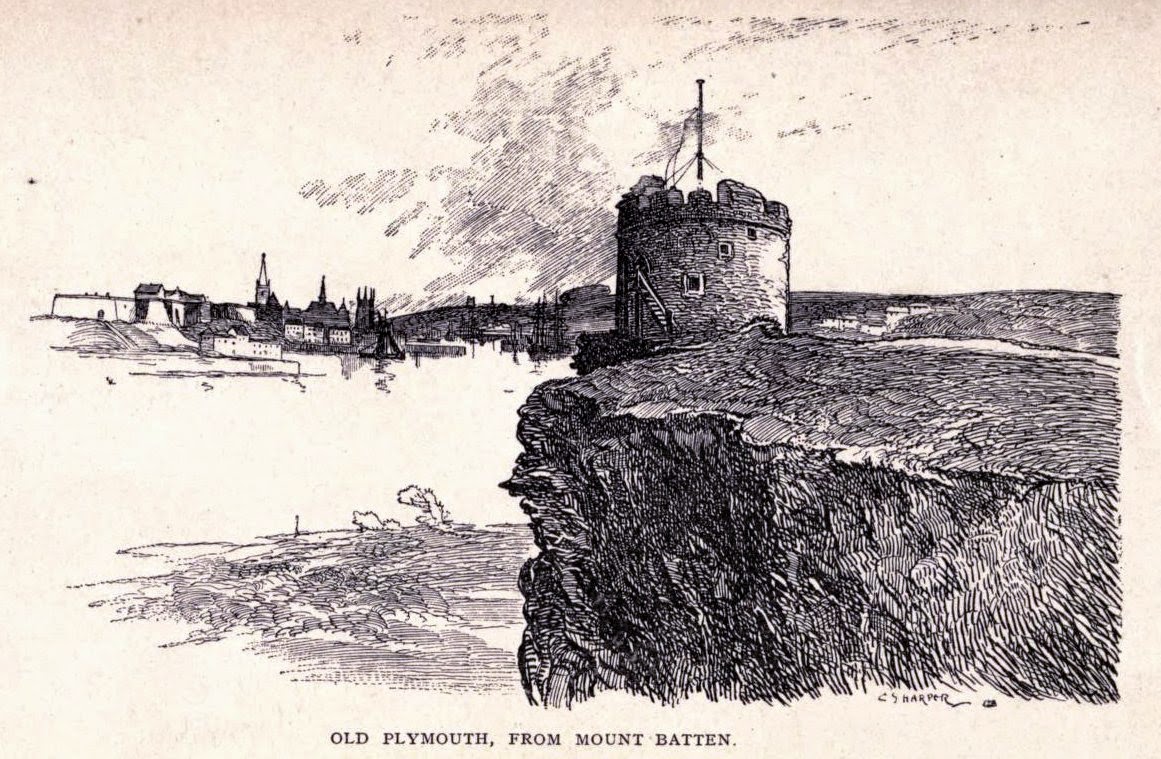 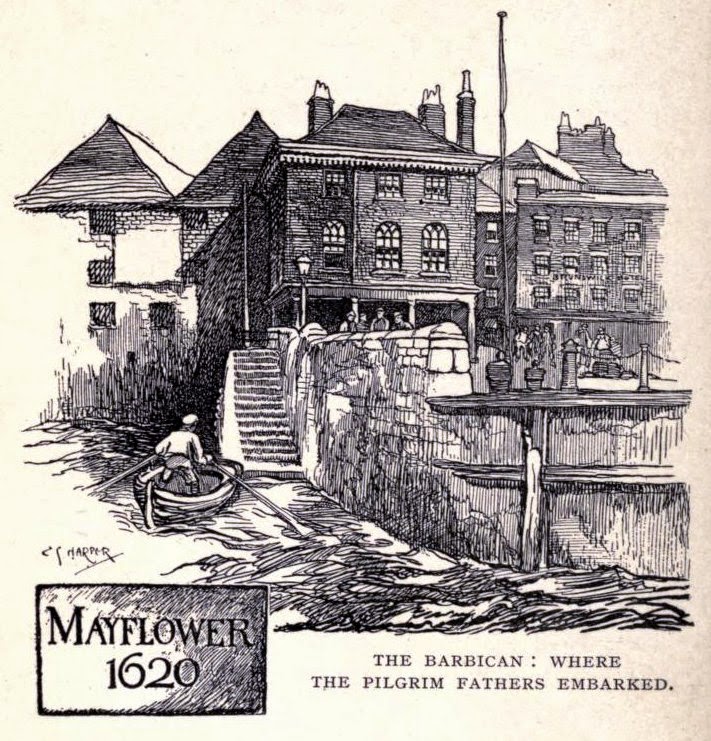 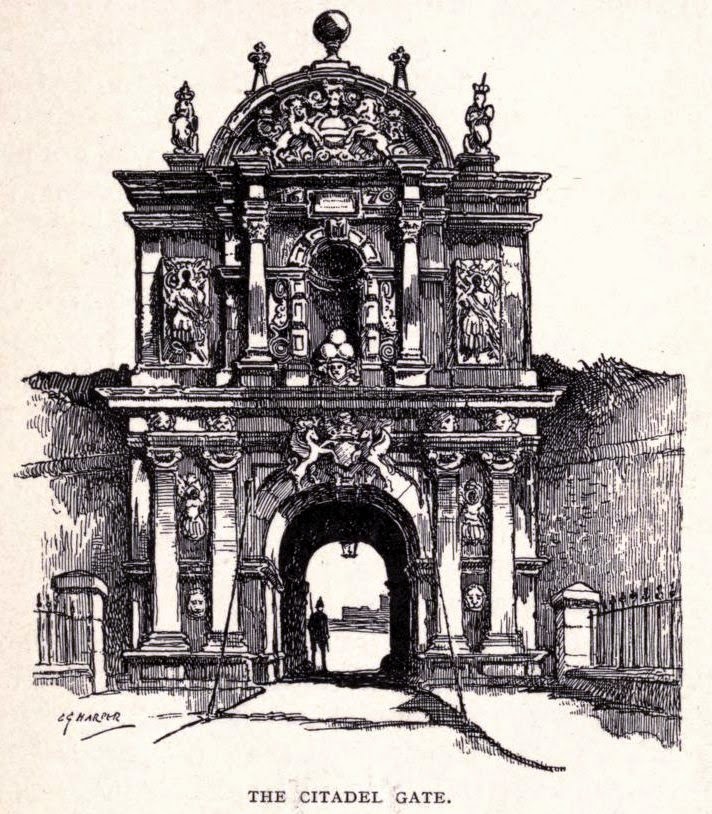 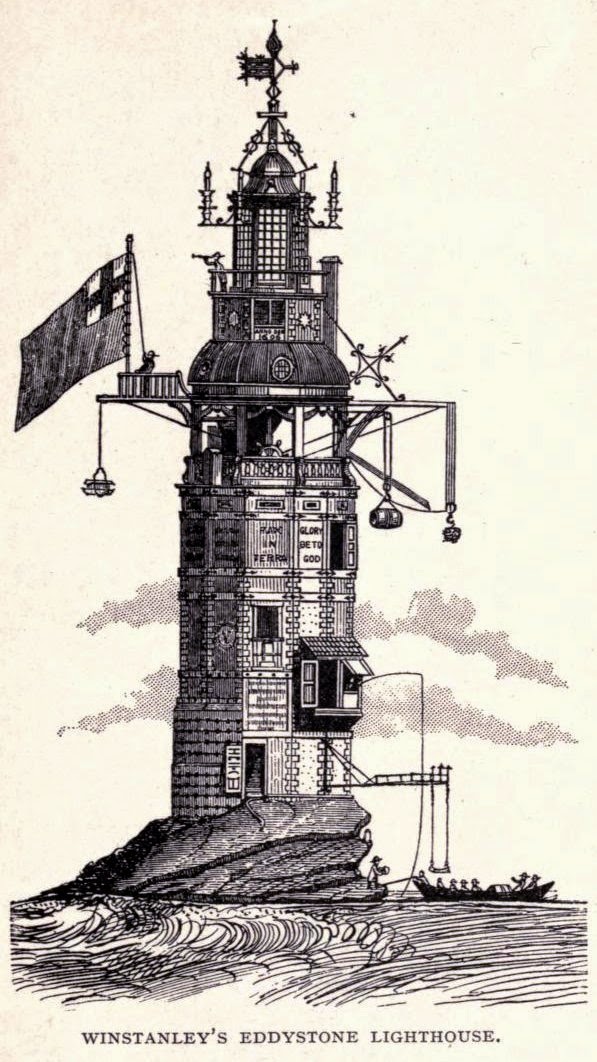 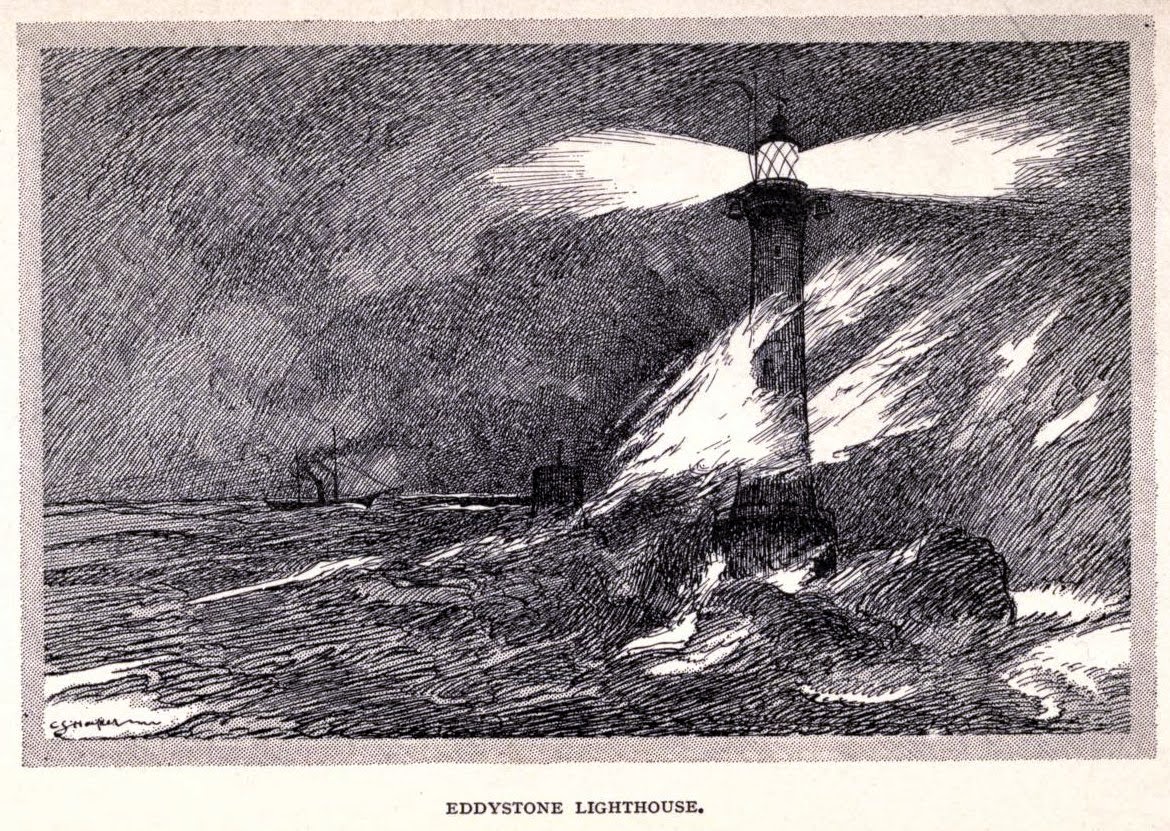 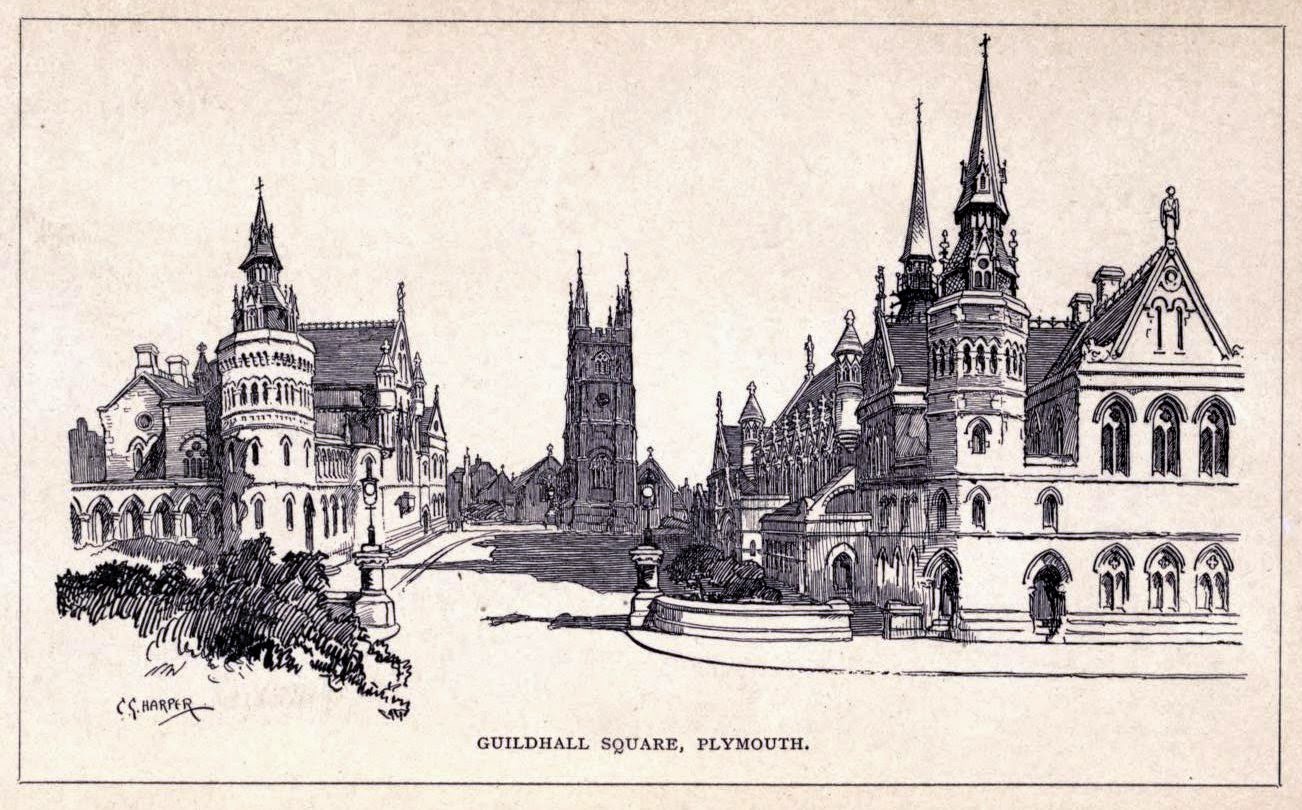 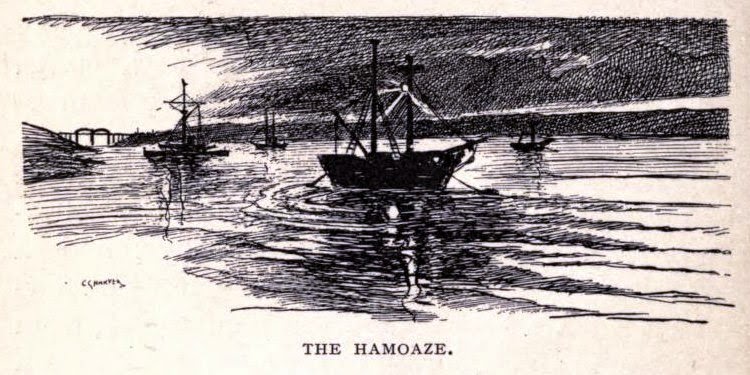 
Charles Harper wrote many more travelogues - see the Internet Archive (creator:"Harper, Charles George, 1863-") - of which several look of immediate related interest:
And also ...
OMG. This one managed to demolish completely my positive view of Harper; I'll comment on it shortly.