The Great Sea Dragons and other weirdness

Lyme Regis Museum Blog just announced what looks an interesting talk by Stephen Locke at Woodmead Halls, Lyme Regis, on Thursday: Thomas Hawkins and his Sea Dragons – a mad, bad, fossil collector? I can't get there that day, but the name rang a bell. I knew Hawkins was buried in Ventnor, Isle of Wight (see the God's Acre photo post Thomas Hawkins 1810-1889), but had never bothered to pursue his details.

The Isle of Wight County Press carried this obituary ...


We have to record the death of the eminent geologist and poet Thomas Hawkins, Esq., F.G.S., &c., which took place in Ventnor on Tuesday morning last, where he had taken up his residence for the benefit of his health, and where he was engaged in preparing the second volume of his "Life and Works," when the hand of death stopped its further progress. The deceased had reached the advanced age of 80 years ...
...
The geological collections of the deceased, which brought him a world-wide fame, after having been housed for some 40 years in the British Museum, have been transferred to their more palatial home in the Natural History Museum in South Kensington. The late Professor Grant called them "The Elgin Marbles of fossil zoology," from the extreme beauty of the specimens and the anatomical skill with which they were cut out and developed. Darwin, Owen, Buckland, Sedgwick, Phillips, Lyell, &c., in urging the Government of the day to obtain these collections for the country, expressed themselves in a similar strain .... Mr Hawkins also received the thanks of the Universities of Oxford and Cambridge for the unique collections which he presented to those corporations. In order to illustrate and explain these extinct monsters, he published the "Memoirs of the Ichthyosauri and Plesiosuari" and "The Book of the Great Sea Dragons." The poetical and political works of the deceased make a long list.

... from which you might not guess there was a more complex side to Hawkins. It's hard to strictly describe him as a "geologist", and certainly not an eminent one. His sole skill, at which he was extremely adept, was in the collection and preparation of fossils. The summary of Stephen Locke's talk says that


Hawkins was a highly successful and in every way extraordinary, notorious and obsessive early collector of ichthyosaurs and plesiosaurs. A contemporary of Mary Anning but a very different character!

... and a little searching rapidly confirms, particularly via the brief summary in Christopher Duffin's 2012 paper Coprolites and characters in Victorian Britain:


Hawkins illustrated his reptile collection in two huge folio volumes; Memoirs on Ichthyosauri and  Plesiosauri (Hawkins, 1834), and The Great Sea Dragons (Hawkins,1840). Here, anatomical description is bound up with rapturous, out-landishly lurid and grandiloquent hyper-Miltonian prose, presenting these Jurassic reptiles in a great literary spectacle before the general public (O’Connor, 2003). The volumes were dismissed as scientifically negligible.
...
Mantell supposedly referred to him as “Mad Hawkins”. Purcell and Gould (1993, p. 95) characterised him as “eccentric and demented”and saw evidence in his writings of a progressive slide into insanity. Certainly, he was no stranger to bizarre behaviour. He laboured under the delusion, for example, that he was the “Rightful Earl of Kent.” He inundated The Times newspaper and various dignitaries with crankish letters, published a stream of opinionated pamphlets, he was highly litigious (he once sued a transport company over a billing error of two pence) and even claimed to have saved former Prime Minister Robert Peel from assassination (Taylor, 1997, 2004, p. 938).
- Coprolites and characters in Victorian Britain, Hunt et al., eds., 2012, Vertebrate Coprolites. New Mexico Museum of Natural History and Science, Bulletin 57 (PDF uploaded by author to academia.edu).

I haven't pursued this in detail, but a skim of the Isle of Wight Observer in the 19th Century British Newspapers archive confirms the "highly litigious" part. When Hawkins was living at the Hermitage, near Niton, he made a reputation as a 'Neighbour from Hell' involved in frequent drama in the County Court (often involving his ranting about injustice at the hands of the court) over altercations such as disputes with his landlord, hitting an alleged trespasser with a "thistle spitter" (a tool for digging up thistles), and starting a riot when going in mob-handed to a house to seize property in lieu of debt payment..


Mr M Smith, in opening the case, [said] Mr Hawkins, the defendant, was a gentleman who had gone to reside in the Isle of Wight in the year 1852, and almost ever since had been in hot water. He had been extensively engaged in litigation,but was invariably unsuccessful, having to pay debts and damages.
- HEARN v. HAWKINS, LIBEL, Isle of Wight, Hampshire Telegraph and Sussex Chronicle etc (Portsmouth, England), Saturday, December 11, 1858 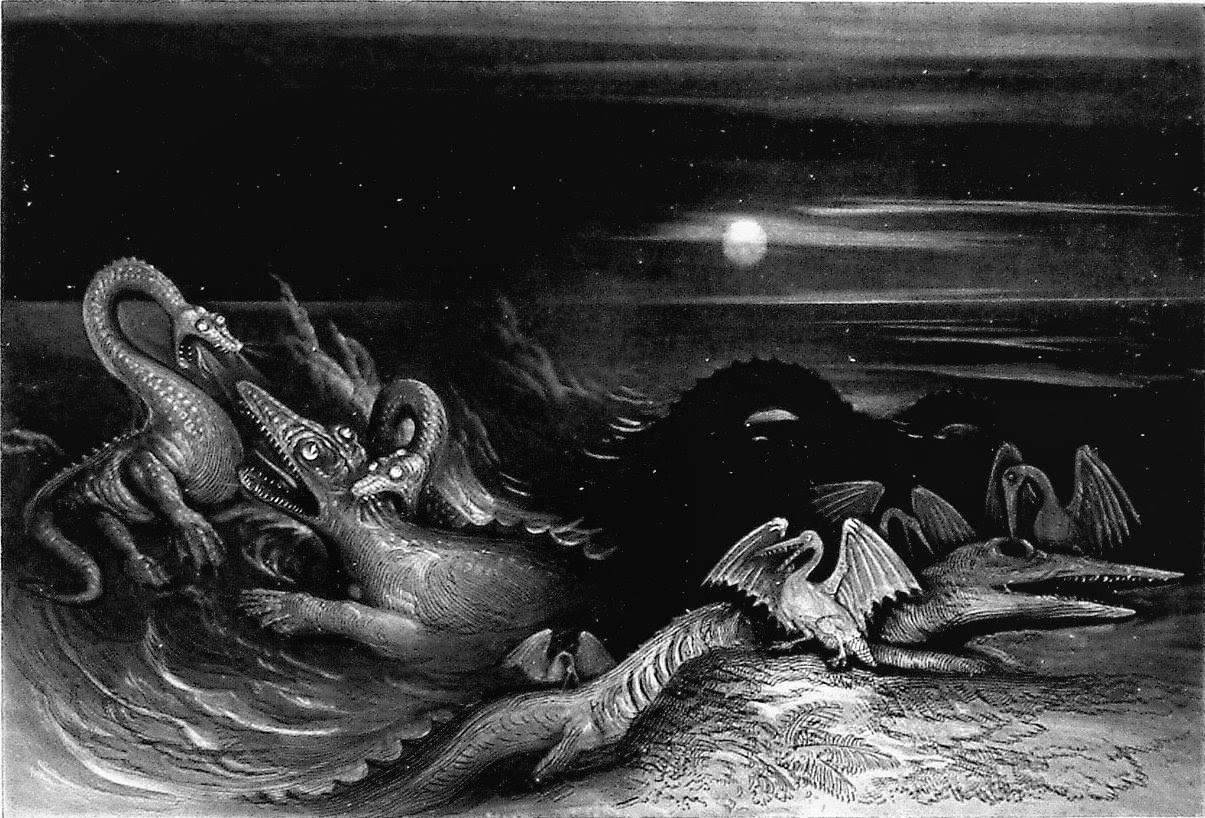 The Great Sea Dragons is a mix of a little palaeontology with a lot of apocalyptic rant portraying the conditions of the formation of these fossils as a battling of leviathans in a cosmic conflict in the remote past. The pre-Adamic world was a dark alien one populated with monsters:


The long, lank, skinny hands, the deathy paddles of Plesiosaurus, or spotted, or livid yellow and pale, upon them fiend-like he fled: his hide, or black or freckled, or russet, his eyes blood-shot fiery, or green, lizard-like; his teeth, his fangs whetted sharp, gloating upon and crunching the gristles of his dying prey: or fleeting through the Expanse of Ocean, or tempting the Profound, or cresting the Upper Waves, preying, or at watch for prey, or lulling himself upon the wide, the universal deep: coming from the Abysm of Ages, the Gog, or the Magog of Pre-Adamite Earth, Giant of Wrath and Battle, behold! the Great Sea-Dragon, the Emperor of Past Worlds, maleficent, terrible, direct, and sublime.
...
Primaeval Earth, rejoicing in the Benison of God, pales in the pænal fire about to wrap her in ruin, and which shall finally rase her utterly out. "Adam," the Lucifer and Protagonist of Antiquity, doing misprision against Sovereignty, turns the weapons of Loyalty upon his Liege, and plunges them into the Bowels of his Mother Earth. Forsaken of Angels, groaning, she bringeth forth grim Monsters, which ravage her Garden, the Locusts that consume it away. The angry and horrent waters too, loosened, swell into a frightful roar, leap upon a thousand Plains, and greedily swallow them up.

A PDF is findable via the Internet Archive here: read if you can bear it, but the best bits are the frontispiece image (above) and the plates of plesiosaur fossils at the end.

As the IWCP obituary and Hawkins' grave inscription say, Hawkins was also a poet, chiefly of pseudo-Miltonian religious epic. His known works (compiled from the ODNB entry and an Oct 6 1860 Notes & Queries entry) are:
Hawkins' My Life and Works vol 1 (an edition also including Prometheus) can be read at, or downloaded from, the British Library website: BLL01014812937 (click I want this for links to the PDF viewer options). It's interesting,  but quite hard going: a mix of rather aggrandized autobiography in story format; straight narrative; polemical pieces; religious exposition; whingeing about litigation connected with his political canvassing in the Isle of Wight; reprints of articles, such as his pamphlets on foreign affairs; and note-format accounts of various correspondence.

There's not much of his secular poetry findable online, but The Gentleman's Magazine for January 1843 prints a sample of three sonnets from his One Centenary of Sonnets, including one in the dialect of Hawkins' native Glastonbury:

"Our lovely Queen, o' goold an' pearls enow
She zurely hav' just zee hur dirmon' croun;
She's got moor monny than booth I an's thow
An' aal th' volk in Glassenbery's toun.
An' that hur vriends and voes hav' aalways vound.
I do lov' th' Quean, upon my hart, I vow,
I wish she'd let me jist hur paliase zee;
I'd gie hur aal I got, my darling quean;
An' if she wuld von wurd but speak to me,
I think vor joy I'd jump out o' my skean,
T'would be a wondervnl gran' thing to be."
Thus spoke our Yeoman in his honest mean.
Diva Victoria! many a heart be thine,
But none more true and loyal, I opine.

This has a distinct edge of double entendre. I don't suppose I'm the only reader to mentally connect the spelling of "palace" as "paliase" with "palliasse" (= mattress).