The tinkle of the accordion ... and the concertina's melancholy string

The Athenaeum comment on Thomas Duncan's silly translated phrase from Bruges-la-Morte, "the tinkle of the accordion" put me in mind of the above scene from the 1985 A Room with a View.

If this line is typical, Duncan's translation is pretty lame. The original sentence (which even I can translate) reads:

[Even an accordion in the streets, with its wheezy and tart little concert, drew tears].

But Duncan completely rips out the specifics, and translates it as:


Even the tinkle of the accordion, so pathetic in its feebleness, wrung tears from his eyes.

As the Athenaeum reviewer said:


Mr. Duncan, in fact, though as a rule fairly competent, is at times (and those times are more frequent than they should be) annoyingly awkward and unidiomatic. "The tinkle of the accordion" is surely the worst possible phrase. He might as well speak about the sigh of a bell, the clank of a violin, or the clang of a flute.
- 'Our Library Table', The Athenaeum, Jan 9th, 1904

It all reminded me of the Room with A View song, which is based on similar sonic misdescriptions, beginning with "Strike the concertina's melancholy string". While uncredited in the film dialogue, the song comes from a couple of stanzas in William Schwenck Gilbert's comic poem The Story of Prince Agib, a spoof of the Arabian Nights story of Prince Agib, who loses an eye through an excess of curiosity. It begins:


Strike the concertina's melancholy string!
Blow the spirit-stirring harp like anything!
Let the piano's martial blast
Rouse the Echoes of the Past,
For of Agib, Prince of Tartary, I sing!

Of Agib, who, amid Tartaric scenes.
Wrote a lot of ballet-music in his teens :
His gentle spirit rolls
In the melody of souls —
Which is pretty, but I don't know what it means.

Of Agib, who could readily, at sight.
Strum a march upon the loud Theodolite.
He would diligently play
On the Zoetrope all day,
And blow the gay Pantechnicon all night.

and returns to the idea in a later stanza quoted in A Room with a View:


They played him a sonata — let me see!
"Medulla oblongata" — key of G.
Then they began to sing
That extremely lovely thing,
"Scherzando! ma non troppo, ppp." 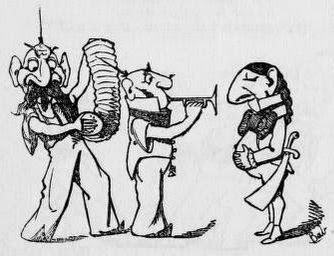 The poem comes from Gilbert's "Bab" Ballads, an excellent series of collections of comic verse - variously satire and sheer nonsense, some of which was recycled into Gilbert & Sullivan opera plots - illustrated by Gilbert himself. The Story of Prince Agib comes from the first collection in 1868, The "Bab" Ballads (see Internet Archive babballads00gilb for a 1910 edition). Gilbert's reputation as a general humorist has been eclipsed these days by the operatic collaborations, and they deserve to be better known. His puns alone are priceless, such as his naming an Arab character Alum Bey. 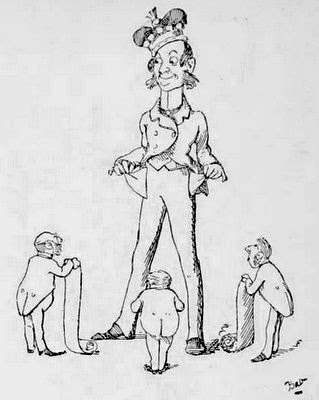 A later edition of Bab Ballads incorporated Songs of a Savoyard, which included material from the opera librettos that works perfectly well as standalone satire, such as Limited Liability, Gilbert's still-relevant satire on the Companies Act 1862, from Utopia Limited, on the process and abuse of limited liability company law.