Labrador Bay and its Tea Gardens

Major General Chermside's reference to "Big luscious strawberries and cream ... sold at Labradore [sic]" reminded me to pick up a loose thread from a walk in August 2013 (see Ice cold in Shaldon) and check out the background to the strangely-named Labrador Bay, south of Shaldon.

The short answer to the obvious question - how did it get its name? - is that it was named after the Labrador Inn (variously called Labrador Tea Gardens, Labrador Cottage, Labrador Bay Hotel, etc) formerly at the site. Accounts generally tie the name's origin to a trader with links to Newfoundland called Captain Trapp, who built a house on a tract of flat ground part-way down the cliff (what would be called a 'plat' in East Devon). I don't know what actual evidence exists for this Captain Trapp.

As described in Major General Chermside's poem The Song of Shaldon's Shore ...


"Big luscious strawberries and cream
Are sold at Labradore,
Which is 'but half a minute's walk'
From sweet, sweet Shaldon's Shore.

... in the 19th and very early 20th centuries, the Labrador Tea Gardens was a modest affair that sold teas along with strawberries grown in the vicinity; it was mentioned in a number of regional guides.


Among the numerous pleasant resorts within easy distance of Teignmouth, we may mention the pretty Strawberry gardens at Labrador, situated half-way up the cliff beyond the Ness, and approachable by the sands at low tide, or perhaps better, by means of the light pleasure boats always to be obtained on the beach at Teignmouth and Shaldon.
-  A Popular Illustrated Guide to Exeter and Its Neighbourhood, ed. Thomas Upward, 1887

They weren't "half a minute's walk" from Shaldon, but easily accessible from the Torquay Road if you didn't mind the 300-foot descent to have tea in what by all accounts was the pleasant microclimate of an overgrown glade.

Meanwhile, let us away to Torquay. Here a steep and rugged path, leading up the face of the cliff, brings us to Labrador. Every visitor to Teignmouth goes also to Labrador, a name not usually coupled with sunshine and sparkling sea, al fresco teas, and roses at a penny a piece. He was a romantic mercantile Jack, who, retiring from the Newfoundland and North American seas, laid out his precarious little estate and built this little house on it, and named his domain after an inhospitable coast. He has voyaged long since into the Unknown, and his romance has gone with him, for the place is now but a superior sort of tea-garden, where you drink your tea and eat your cream and strawberries in the open-air arbours and the society of innumerable centipedes and spiders.
- From Paddington to Penzance; the record of a summer tramp from London to the Land's End (Charles G Harper, 1893, Internet Archive frompaddingtonto00harpiala) 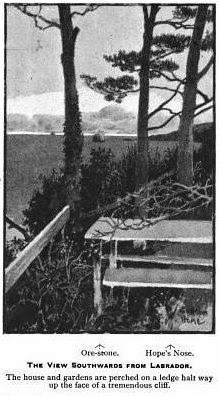 On the other side of the Ness there is a stretch of sandy beach, where there is a tunnel through the cliff to Ness House, as that residence has its private path, and a bathing cove on the shore. Here a runlet of fresh water trickles through the tangled herbage that clothes the cliff, and many a picnic kettle has been boiled upon the shore. The Rifle Volunteer targets are also here. Crossing another group of rocks, "Labrador" is reached, where in June strawberries and cream flow like Canaan's milk and honey. The warm, sunny cliff has had strawberry gardens spread upon its face. Here they ripen lusciously under the southern sunshine, and feasters come on foot, or by boat, though landing is not always easy. Should pedestrians outstay the tide, there is a pathway up the cliffs leading into the Torquay road by which to return home.
- p60, Teignmouth, Its Past History and Present Interests, Beatrix F. Cresswell, 1901

Tumbled rock-heaps, alternating with beaches, lead to the foot of the cliff by whose up-on-end path you breathlessly reach Labrador, a place known to every one who has visited Teignmouth. Local traditions tell how this cottage and garden, half-way up the four hundred feet of cliff, were the work of a retired sea-captain who, settling here from a long career in the Newfoundland trade, christened the place by the name it still bears. I do not suppose he ever contemplated it being converted into a picnic inn, but he may have had an eye to a snug little traffic in smuggling, for which in his time it must have been especially adapted.

However that may be, there is no questioning the popularity of Labrador, where teas are provided and swings tempt the giddy-minded, and roses clamber over the house-front in a manner suggestive of Persia and Omar Khayyam. Why, with leisure and genius one might compose another Rabaiyat when the tea-takers were gone.

"I reckon," says one of the soil, whom we meet here and exchange remarks with, "Twize up and down es a gude day's work," and it really is a leg-aching job to climb to the top of the cliff, which must be done to gain the Torquay road. South Devon is sleepy, and, experiencing this steepest of paths and hottest of hot corners, the stranger is not surprised. At any time it is possible to sit down and drop into a "bit of a zog" which is Devonian for a nap.


By the 1920s, however, Labrador Tea Gardens had been upgraded to a fully-fledged hotel, with a small complex of bungalows and chalets, that was advertised in the Times as well as motoring and travel publications ...

... and attracted rave reviews as a holiday location for those who wanted seclusion.


Secluded
While I was away in South Devon recently I came across an hotel which might interest those readers of The Autocar who sometimes write to me for information concerning desert islands, where there are no motor cars or trippers. This place is not a desert island, far from it, but it has what one wants in a desert island, combined with the advantages offered by modern hotel management. At least, there are no motor cars; one leaves them at the top of a cliff in a lock-up belonging to the hotel and then proceeds to go down about 300 feet by a zig-zag path (and up on the back of a pony) to a beach owned by the hotel and unreachable by any but the guests. All the bay and sloping fields adjacent belong to the hotel, and once one gets there the world has been left behind. A charming place, a three-hundred- year-old cottage enlarged and enlarged to meet requirements, but still retaining the atmosphere of a country house by the sea, secluded but not isolated. Even the postman does not call, letters have to be sent to the post office. I know nothing about the place except that I have seen it and made a note to visit it some time, but it has an R.A.C. appointment. Where is it? It is the Labrador Bay Hotel S. Devon, about two miles from Shaldon and Teignmouth, and five from Torquay. The postal address is Labrador Bay P.O., Newton Abbot.
- The Autocar, Volume 73, 1934

There are plenty of online postcards and photos of Labrador Bay, with a particularly interesting collection at the excellent Dartmoor Trust photo archive (mostly taken around 1930, but a few later). Once at the Dartmoor Trust page, click to enlarge:
In 1936, the hotel went up for sale as part of the Ness Estate ...


THE WELL-KNOWN
LABRADOR BAY HOTEL
(LICENSED.)
Situate on a natural plateau near the foot of Devon red Cliffs and occupying a position of which the natural attractions are unrivalled, and is one of the most famous beauty spots. Approached from the Teignmouth- Torquay Road by a winding path down the face of the Red Cliffs and also from a Pony Track. 14 bed rooms, 2 bath rooms, 2 lounges, dinner room, well-equipped offices. Car Park and 6 Lock-up Garages. Staff Quarters. Large Tea Bungalow. Own Water. Petrol Gas Lighting. The tea gardens and delightful grounds extend all to about
21 ACRES
INCLUDING
VALUABLE PRIVATE BATHING BEACH
- Mudge & Baxter, The Times (London, England), Monday, May 25, 1936; pg. 25; Issue 47383.

... and this was getting close to the end of its timeline, as in the early hours of 25th March 1938, it was destroyed by fire. There's a Torquay Herald & Express clipping here at the Bird, Childs & Goldsmith website; it mentions that the firemen were hampered by the location (400 steps down from the road) and had to fight the fire with buckets and biscuit tins of water. It was never rebuilt, and the undercliff where it stood - the access steps carried away by a later landslide - is now overgrown.

I did unknowingly walk right past the location in the summer of 2013. As I mentioned then - Ice cold in Shaldon - I was on the final leg of the fairly strenuous coast path walk from Babbacombe to Shaldon. I'd run out of water on what was a fearsomely hot day, and had lost interest in sightseeing by that point. Besides, Labrador Tea Gardens (or by whatever name) wasn't mentioned on the Labrador Bay Nature Reserve information boards. Now I realise it was directly below the cliffs near the Dene Cross bus stop, where the A379 takes a brief detour coastward about a mile south of Shaldon (see again National Library of Scotland side-by-side view).

There are no public paths to the site from above. However, it is accessible from the shore, and Maidencombe.net has a nice video of a 2013 visit, Found - the site of the Labrador Bay Hotel which was gutted in 1938. There's not a great deal left of any structures, but it's not greatly overgrown, and the flat ledge is still very clear. The whole series - "the Indy tapes" - is worth watching as 'Mr Cruisedog' (Jim Campbell) explores the site, having got there by walking round the shoreline from Ness Beach. An interesting feature is the remains of the wartime concrete barge half-buried in the shingle.

Some paragliding videos on YouTube and Vimeo also give aerial glimpses of the location (the Labrador Bay car park is a popular launch point for paragliding). This one in particular (watch in HD) shows well the wooded undercliff at the site.