I just ran into another nice collection of topographical prints: Henry Besley's Exeter-published Views in Devonshire (c. 1861). This came about through seeing an interesting print in an antique shop - one I'd not seen before of the Valley of Rocks at Watcombe. It's now heavily-wooded, but in the 19th century it was open pasture displaying spectacular rock formations.

I don't have any qualms about depriving the shopkeeper of a sale, because this was evidently a 'print' obtained by the vandalism of cutting up a book (not necessarily by the vendor). However, I was interested to find out where it came from. The image is online, variously miscredited to such unfindable titles as "Views in Devon", "Devonshire Views", etc - but the publisher details at Devon County Council's Etched in Devon's Memory page (SC3365) trace it to the real title, Views in Devonshire. It was published by the Exeter printer and publisher Henry Besley, who produced prolific collections of pencil sketches by the artist George Townsend, converted to steel-engraved vignettes by uncredited engravers (Publisher and engravers: the production of Devon prints has a brief account). 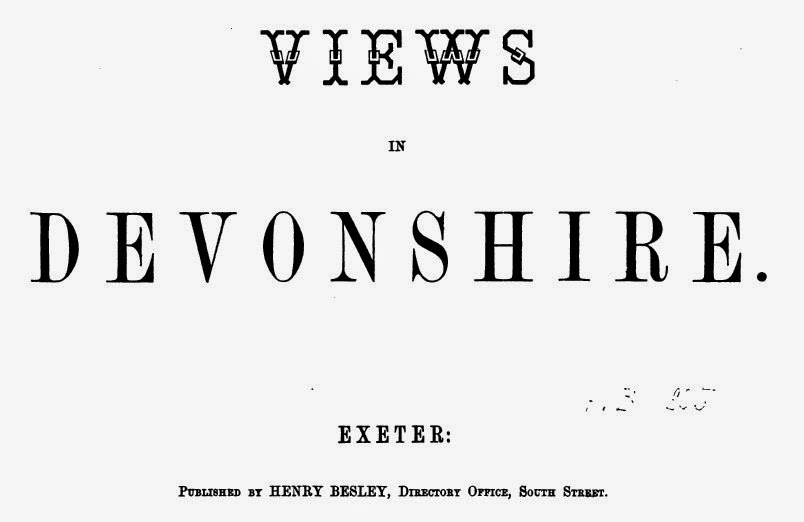 Views in Devonshire has 60 very pleasant prints. US readers should be able to see the book in Google Books (ID QtbAAAAQAAJ) but for UK readers it's in that Google limbo that prevents non-US access to Google scans of books after around 1865. I've investigated this issue previously - see the latter part of the post William Barnes online (depending where you are) - and Google has clarified that this is not a legal restriction, just a Google policy to inhibit indiscriminate troughing of Google scans for commercial redistribution outside the USA. Thus it's perfectly OK to read and download the files (via a proxy server) for personal and non-commercial use, and I assume a blog post counts as that.  Anyhow, here are the images (there's no accompanying text). I'll post half of them today, and the rest tomorrow. The first batch is largely south Devon.