Expanding on a source from the previous post: The South Devon Coast (Charles G Harper, London: Chapman & Hall, 1907, Internet Archive ID southdevoncoast00harpgoog) is a pleasant travelogue illustrated with around 70 line drawings by the author, a prolific travel writer and illustrator who was active between 1892 and 1933 (see bibliography).

The account's interesting in that it's centrally about Harper's own impressions. He doesn't seem obliged to dwell on well-trodden information or (though he's generally appreciative) to sell South Devon as a venue uncritically, so there's a deal of quirky and little-known detail I've not seen elsewhere, and he's occasionally quite snarky about places and people.

For instance, he's very scathing about weekend Exonian visitors to Exmouth, describing them in terms similar to the classist late-Victorians' bête noire of 'Arry and 'Arriet - working-class Londoners dressed up for Margate ...


If I were to say that Exmouth was the Margate of Devonshire, I should please neither Exmouth nor Margate; for all Devon does not contain a purely seaside resort of the size of that favourite place in Kent. But it is, like Margate, popular with trippers; it has sands; and is, in short a place where the crowd spends a happy day: the crowd in this instance hailing, as a rule, from no further than Exeter.

Exeter is an interesting city, and its citizens, in their own streets and in their everyday garb are sufficiently amiable, but when Exmouth on Sundays and other holiday-times is overrun with Exeter's young men, tradesmen's assistants, clad in the impossible clothes pictured on provincial advertisement hoardings, laughing horse-laughs, singing London's last season's comic songs, wearing flashy jewellery, and smoking bad cigars, Exeter's reputation, and Exmouth' s suffer alike. If you can imagine such a curious hybrid as a provincial cockney the type really exists, although it has not yet been noticed by men of science you may picture something of Exmouth's week-end patrons.

The provincial cockney, poor thing, imagines himself in the forefront of style, but he is merely a caricature of the London cockney plus his own accent, which, wedded to cockney slang, is peculiarly offensive.

... and even the positive assessments are somewhat demeaning:


... the soft climate, which laps you as in cotton wool, and takes all the energy out of you, and has rendered the folk of Devon the kindly lotus-eaters they are.

But then he's just as scathing about visitors:


Sidmouth is in these days recovering something of its own. Not perhaps precisely in the same way, for the days of early nineteenth-century aristocratic fashion can never again be repeated on this earth. But a new vogue has come to it, and it is as exclusive in its new way as it was in the old ; if not, indeed, more exclusive. More exclusive, more moneyed, not at all well-born, jewelled up to the eyes, and only wanting the final touch of being ringed through the nose. Oddly enough, it is a world quite apart from the little town ; hidden from it, for the most part, in the hotels of the place. Most gorgeous and expensive hotels, standing in extensive grounds of their own, and all linked together in a business amalgamation, with the object of keeping up prices and shutting out competition.

It is not easy to see for what purpose the patrons of these places come to Sidmouth, unless to come down to breakfast dressed as though one were going to a ball, and dressing thrice a day and sitting in the grounds all day long be objects sufficient. From this point of view, Sidmouth town is a kind of dependence to the hotels, an accidental, little known, unessential hem or fringe, where one cannot wear ball-dresses and tiaras without exciting unpleasant criticism.

Bullion without birth, money without manners are in process of revolutionising some aspects of Sidmouth, and it is quite in accord with the general trend of things that the newest, the largest, the reddest, and the most insistent of the hotels should have shoved a great hulking shoulder up against the pretty, rambling, white-faced cottage in Woolacombe Glen, where some earliest infant months of Queen Victoria were passed, and that it should have exploited the association by calling itself the "Victoria."

For those who like their topographic prints, I'm reposting the whole set over three posts, with commentary on any that seem especially interesting. 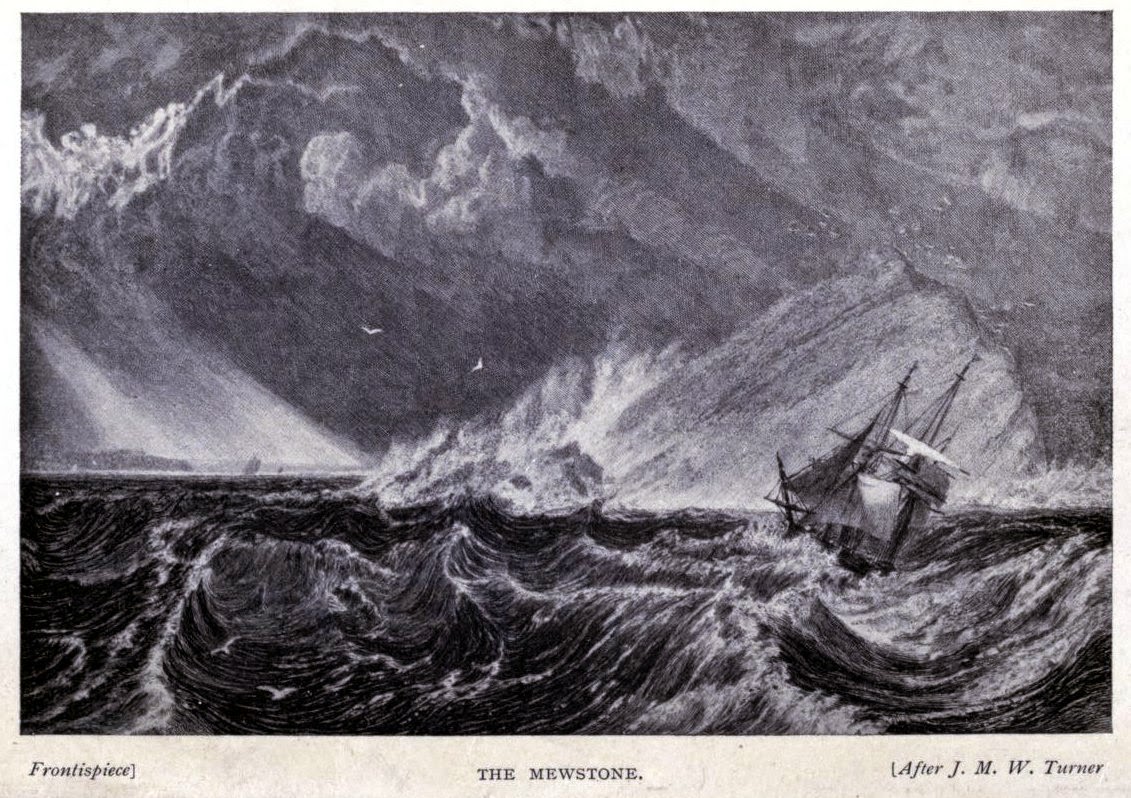 The above picture shows Captain George Peacock's yacht Swan of the Exe with its tender, the Cygnet. The Swan of the Exe was lost or destroyed some time in the 20th century, but the Cygnet is preserved in Topsham Museum. I was going to write about this separately, but I can't really expand on Tony Dunlop's excellent post at Devon Perspectives, Swan of the Exe. I will, however, repost the very nice photograph from Devon and Cornwall Notes & Queries, Volume XI (here): 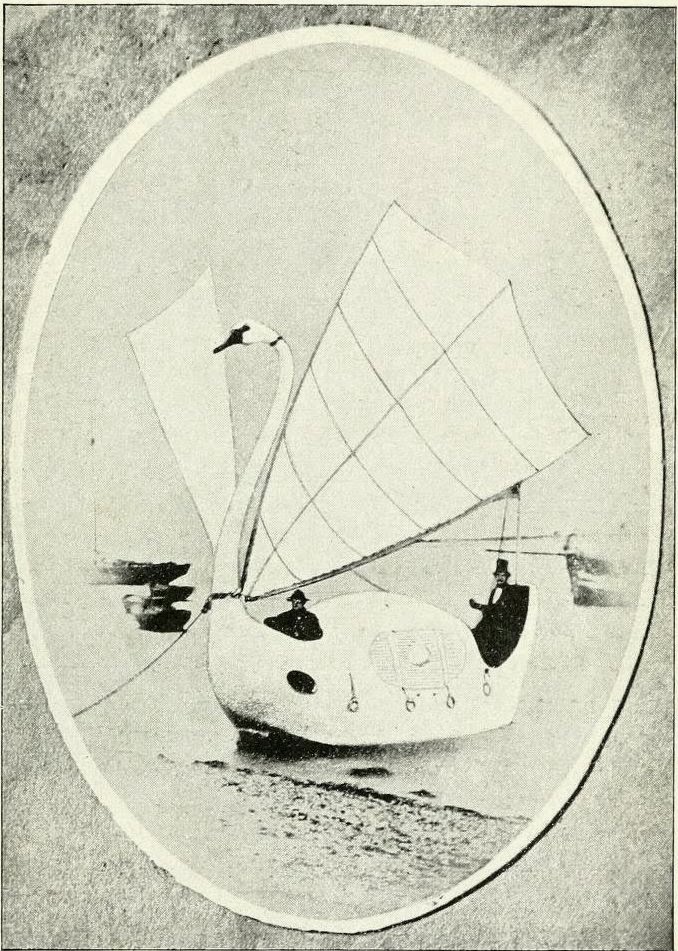 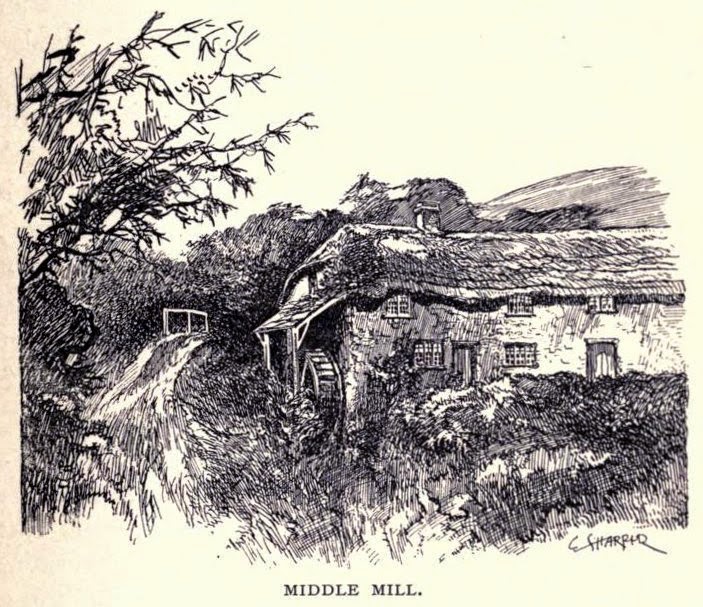 The above scene is Charton Bay, on the coast below the Lyme-Axmouth Undercliff. The thing that looks like a tunnel entrance is a limekiln, I assume now either overgrown or destroyed by coastal erosion. Harper describes this location, where the ravine Charton Goyle meets the sea (see the NLS map comparison to compare the present scenery with that around the time Harper wrote the account):


Here you must calculate every step and nicely test the mossy hummocks before fully trusting them; finally emerging upon an open plain midway between the sea below and tall cliffs above ; a plain where rocks of every shape and size have been hurled down in extraordinary confusion. Here the explorer requires not a little of the suppleness and agility of the chamois, and growing at last weary of bounding hazardously from crag to crag, climbs with extraordinary labour, past monstrous grey, ivy-grown spires and pinnacles of limestone, up a winding footpath in the face of the cliff, to where the Whitlands Coastguard station looks down upon the tumbled scene. From this point the coastguard-path lies along the cliffs' edge, to where the cliffs die down to the waterside in the deep coombe in whose woods the sea comes lapping at Charton Bay. Here a limekiln, that looks romantic enough for a castle, stands on the beach, with the dense woods climbing backwards, and on the sky the the roofs and tower and chimneys of Rousdon.

Nowadays the bay isn't officially accessible to the public using the South West Coast Path; it's a private beach belonging to the Rousdon Estate, the elite gated pseudo-village developed around the former mansion of the Peek family, and the path to it from the estate crosses the Coast Path. A number of holiday cottages on the estate, such as Middlemist and Peek House & Billiard House, come with the beach access as a perk. (Part of the folklore of the Undercliff path is that it's impossible to get off between Lyme and Axmouth; there are actually one or two very clear private access routes inland used for woodland maintenance and emergencies). 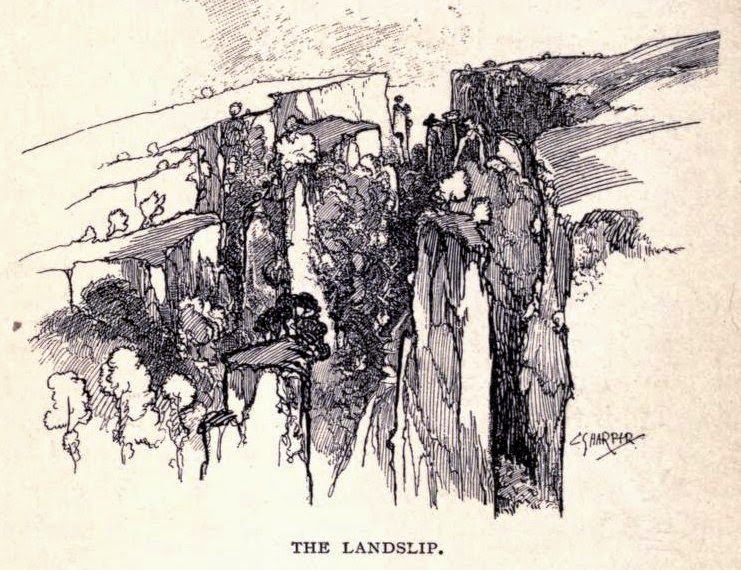 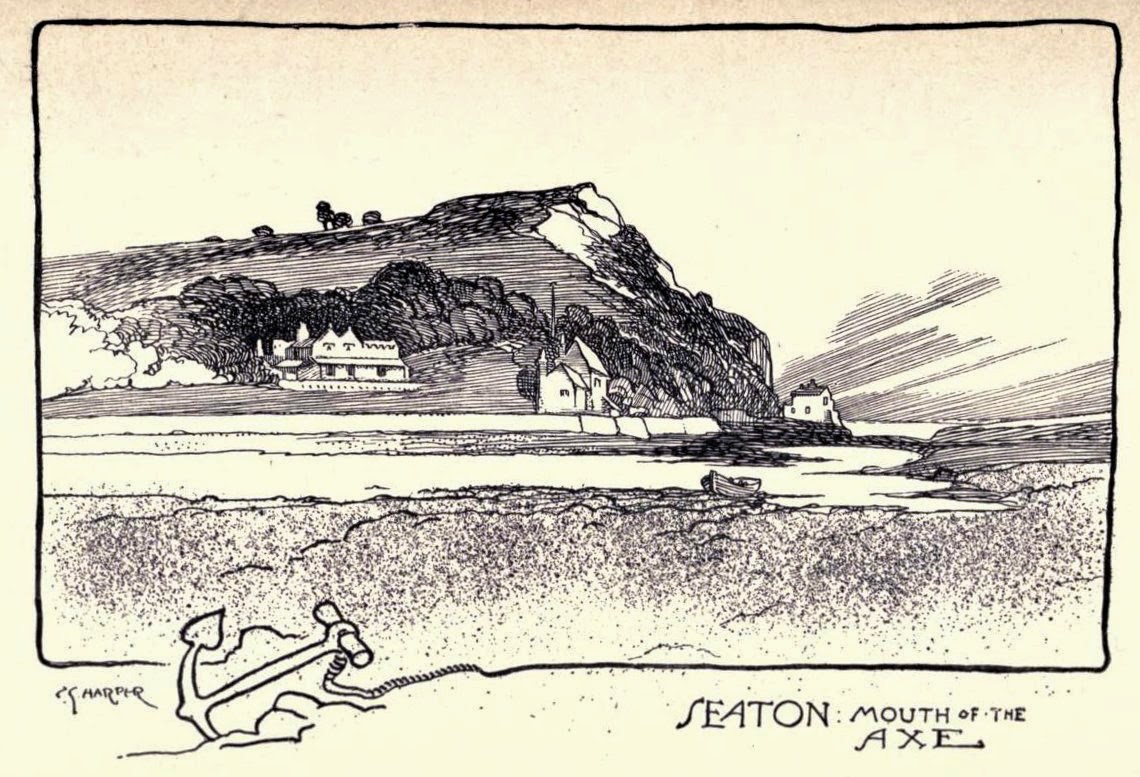 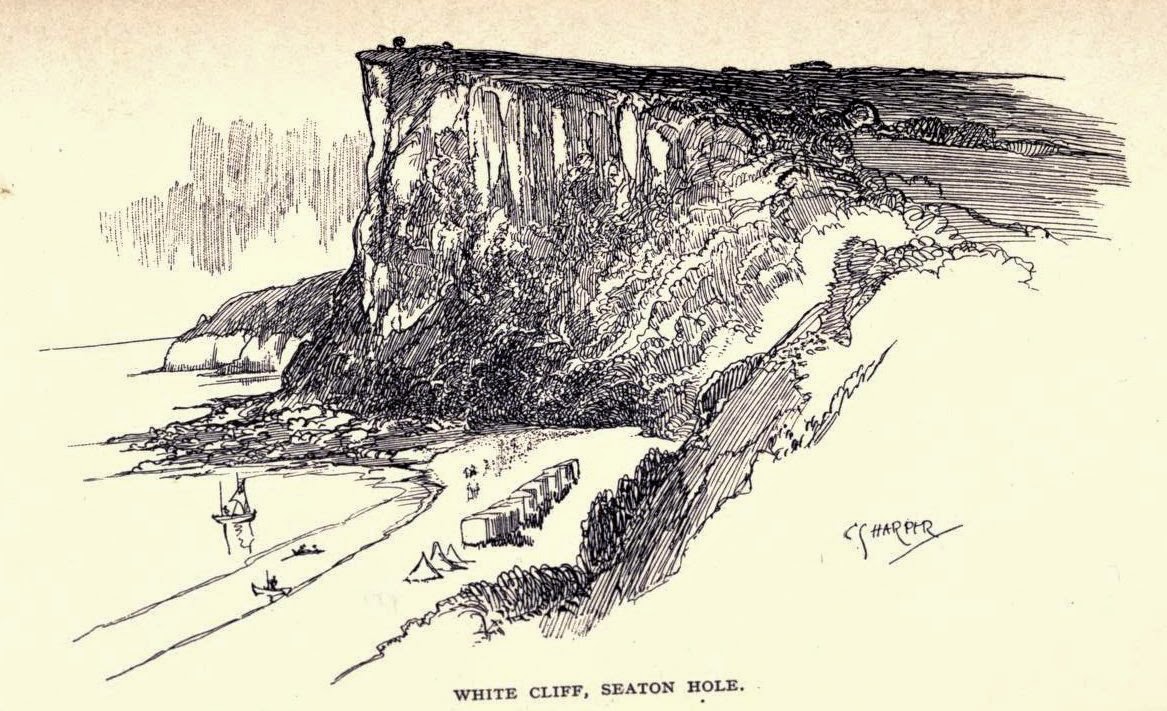 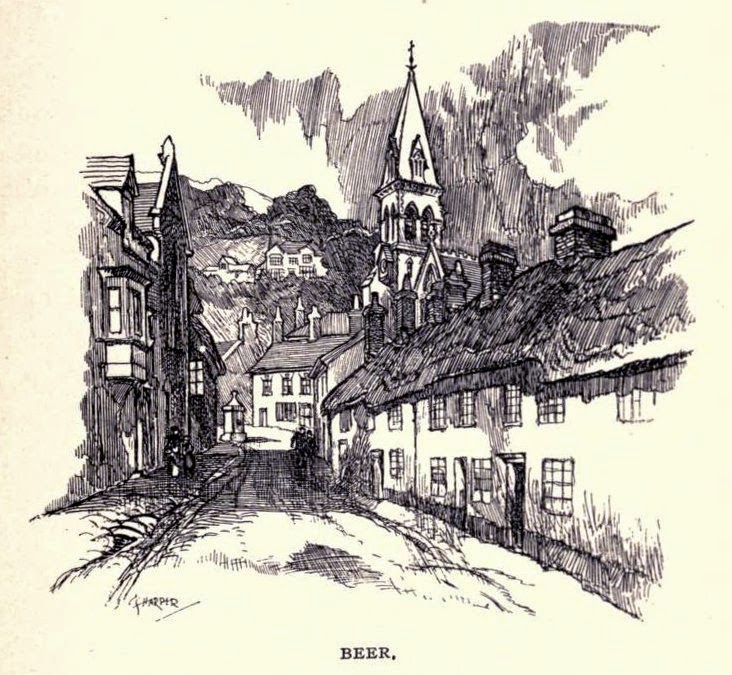 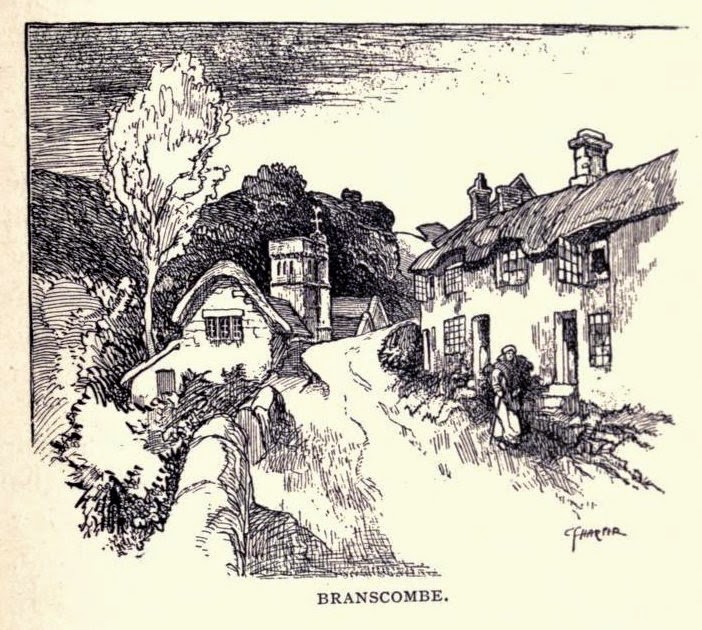 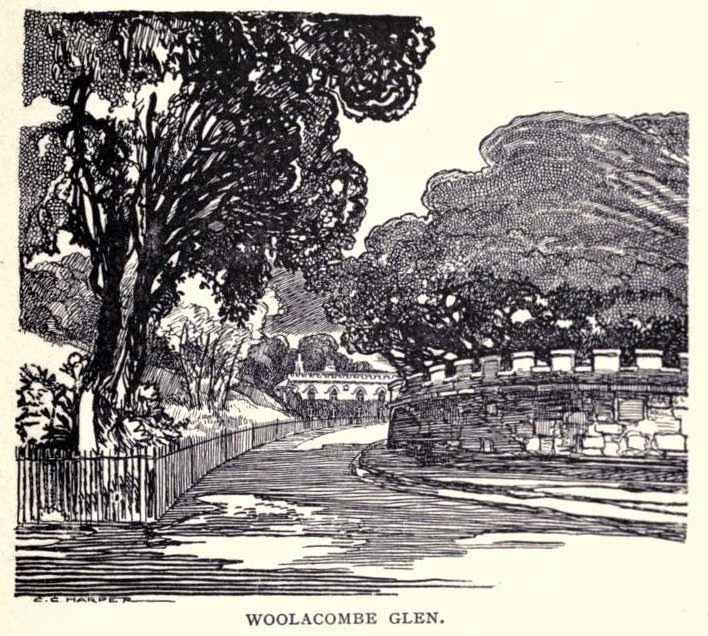 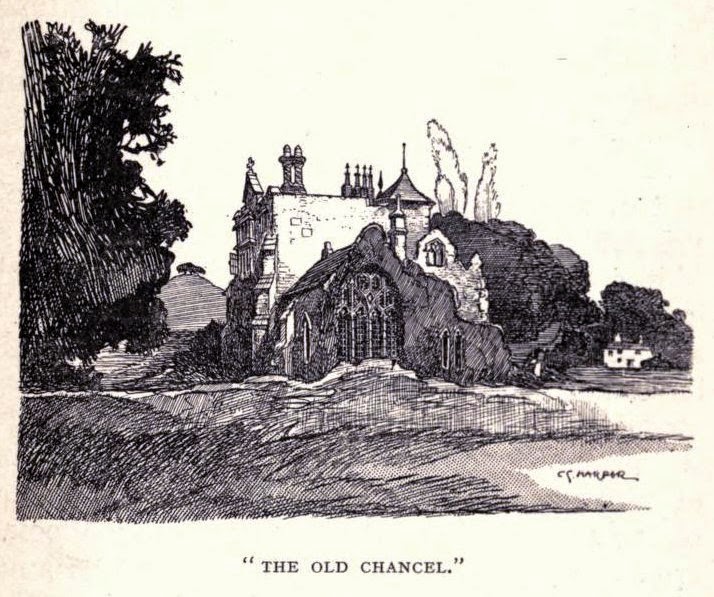 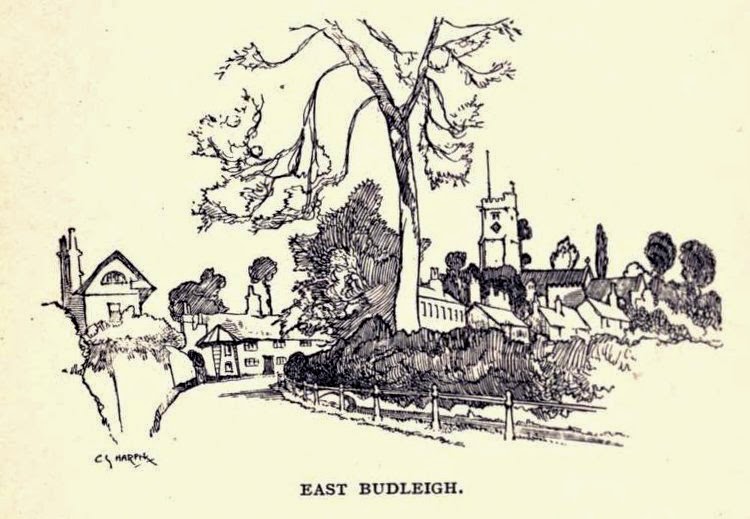 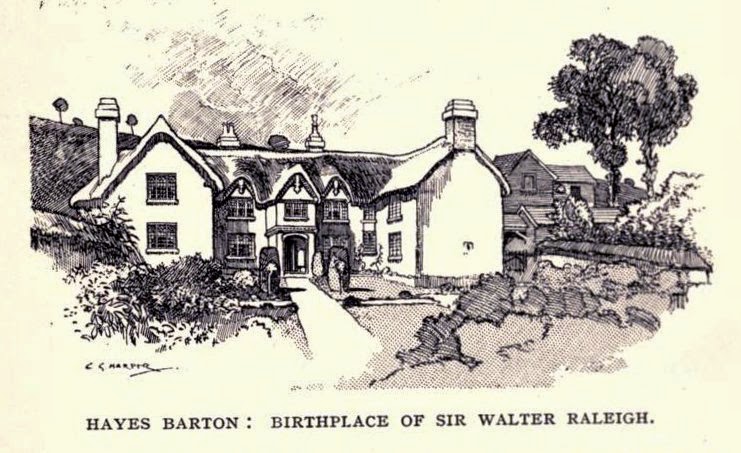 This is a nice picture of Topsham Underway, but it takes some major liberties with scale and proportion. The tower is on the side of the building, not rising straight from the centre; the steps are not as close to the adjacent houses; and there are more buildings at river level far left, not scenery disappearing into the distance. 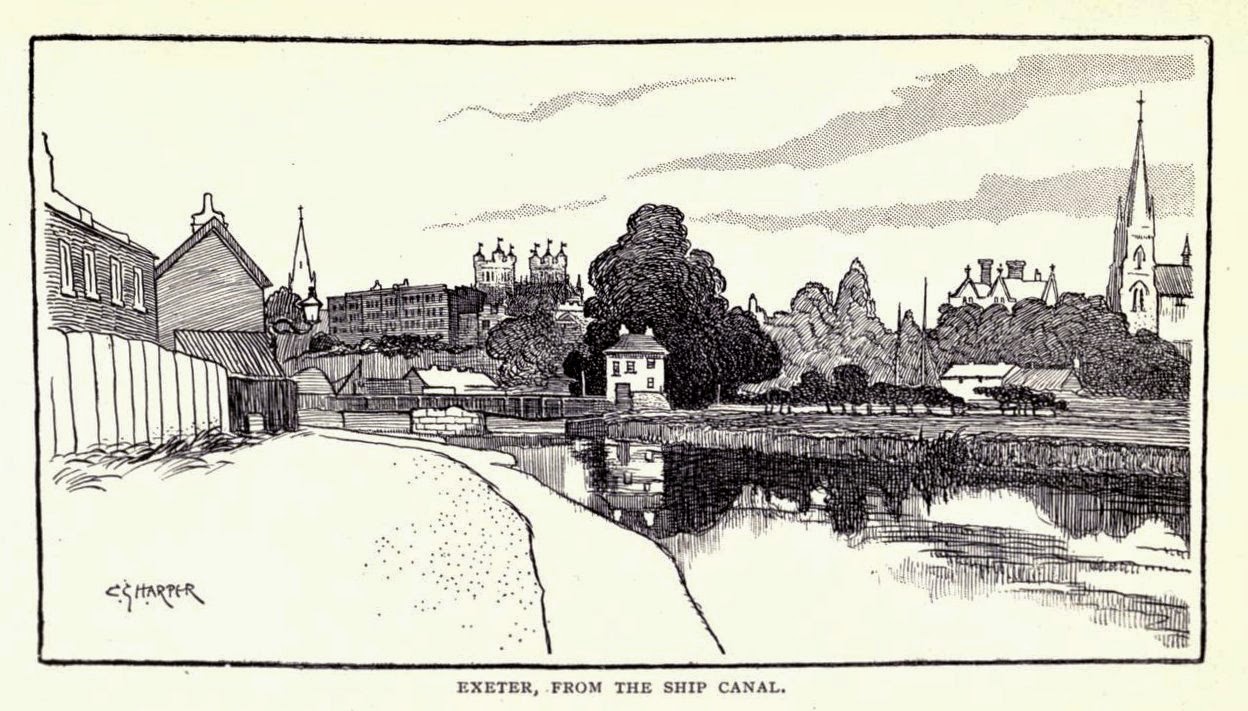 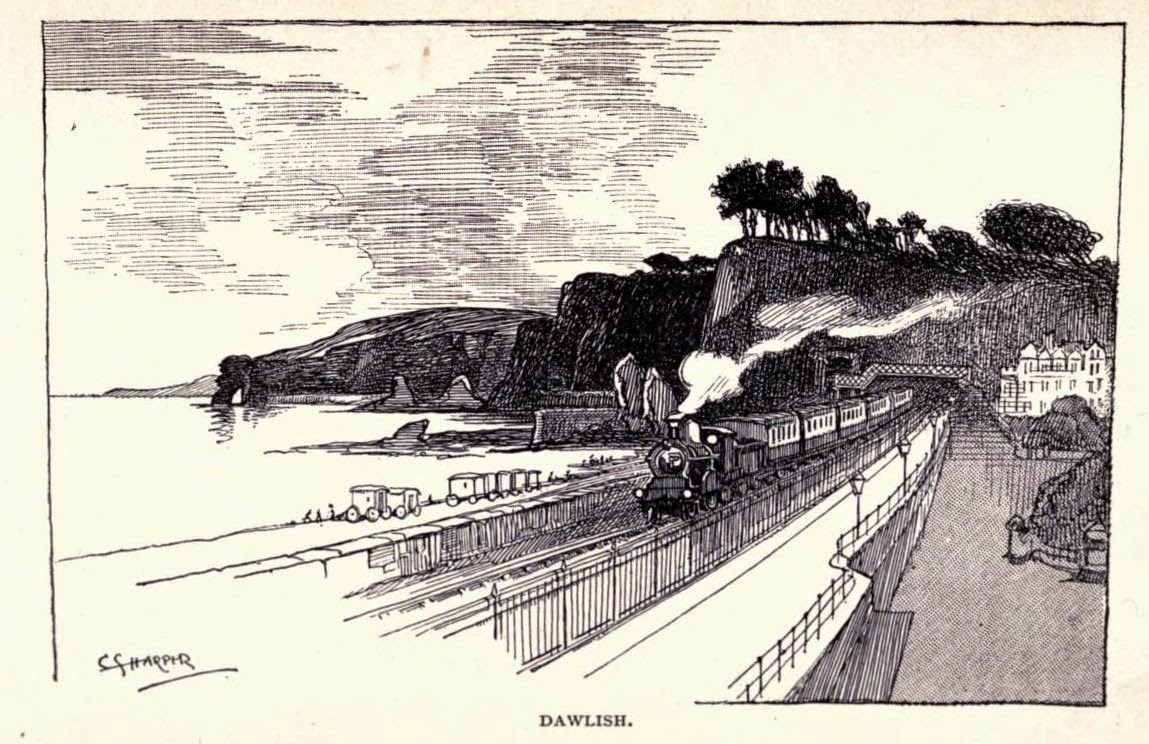 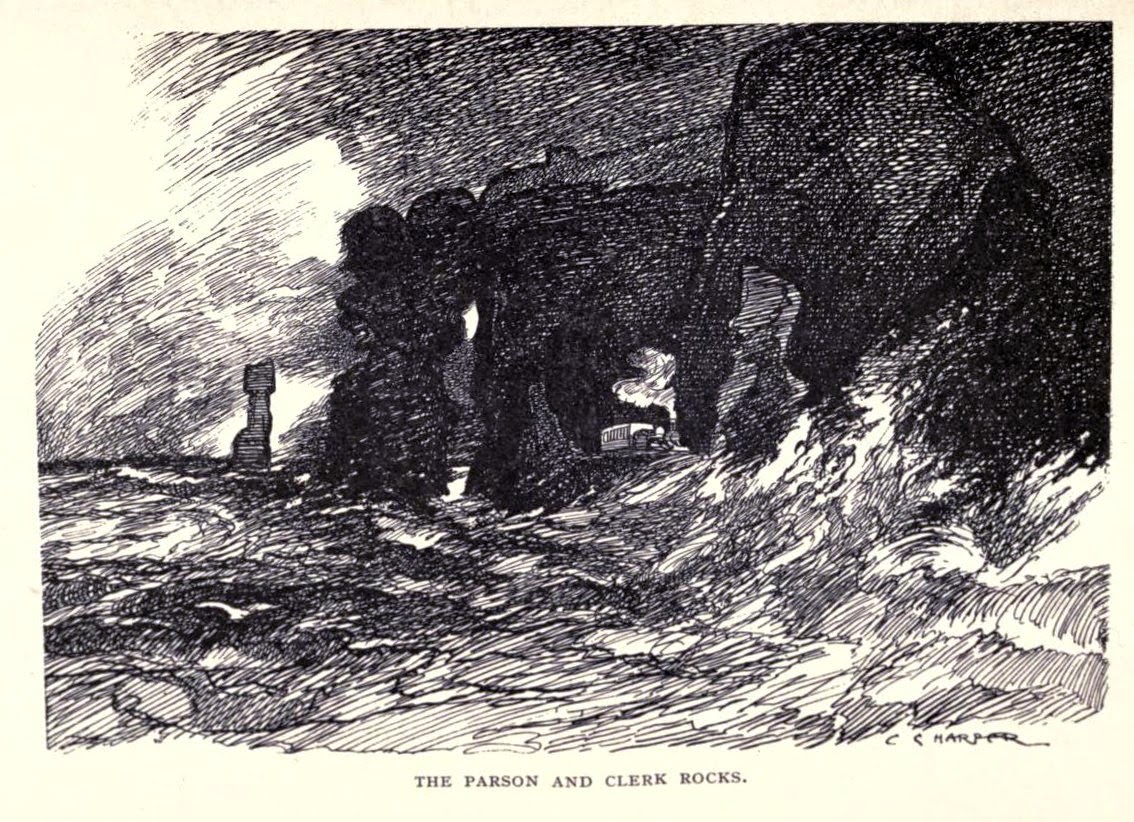 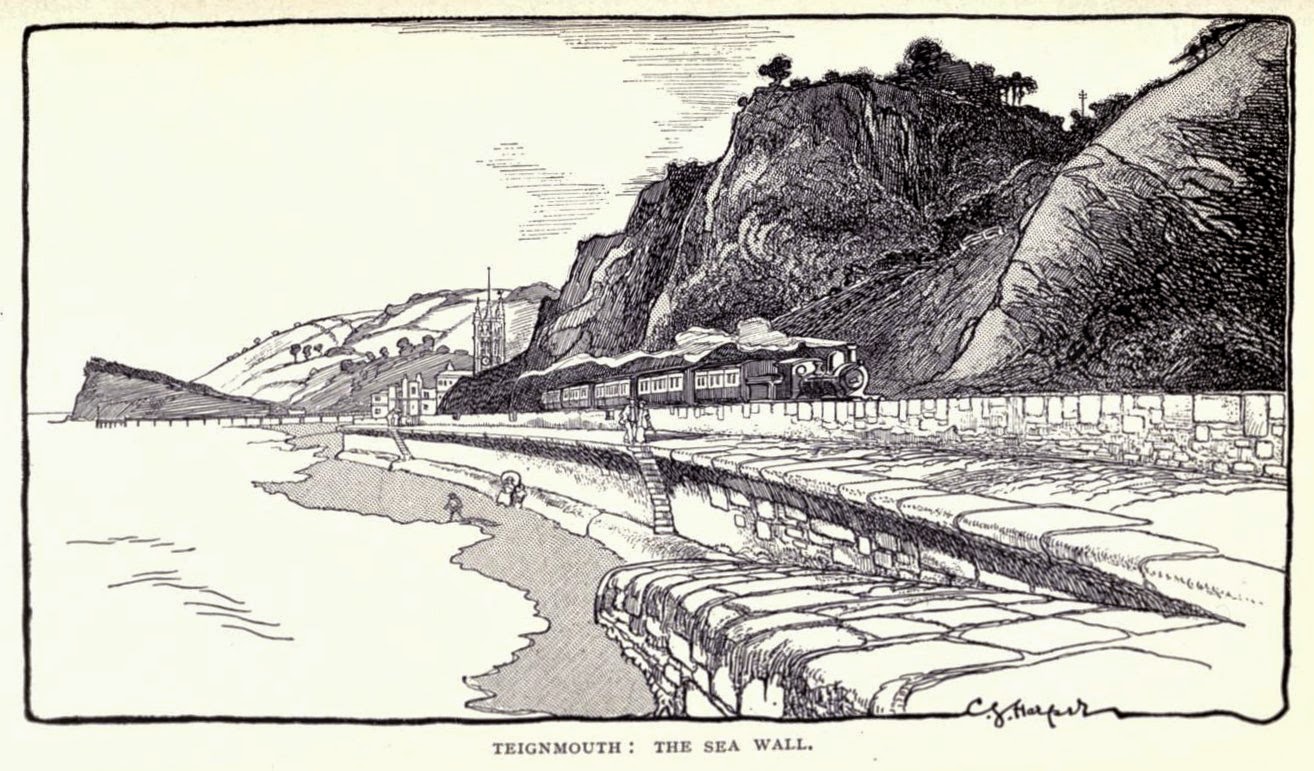 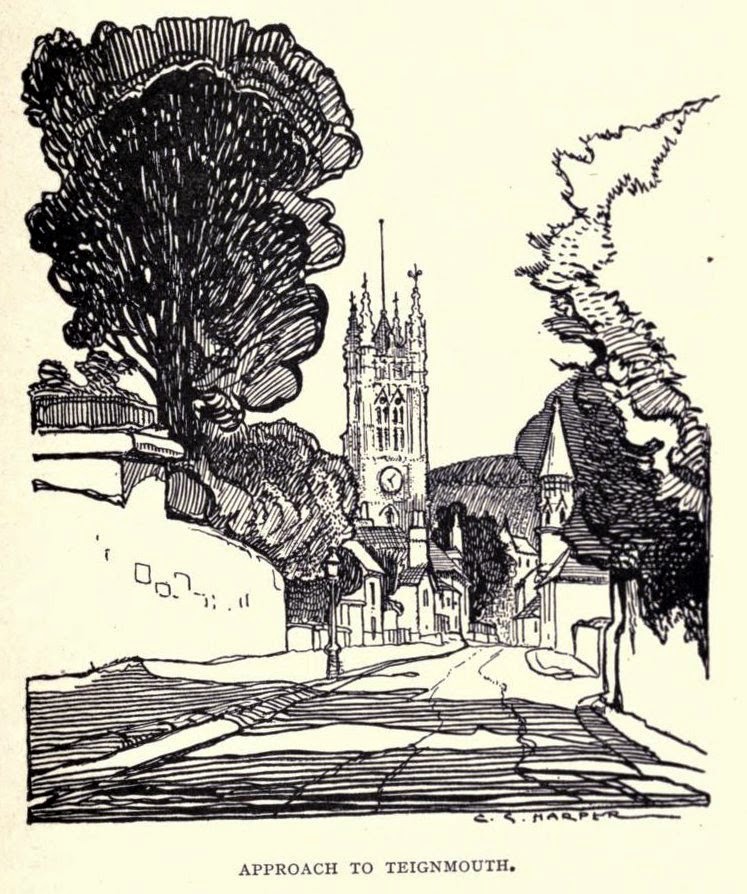 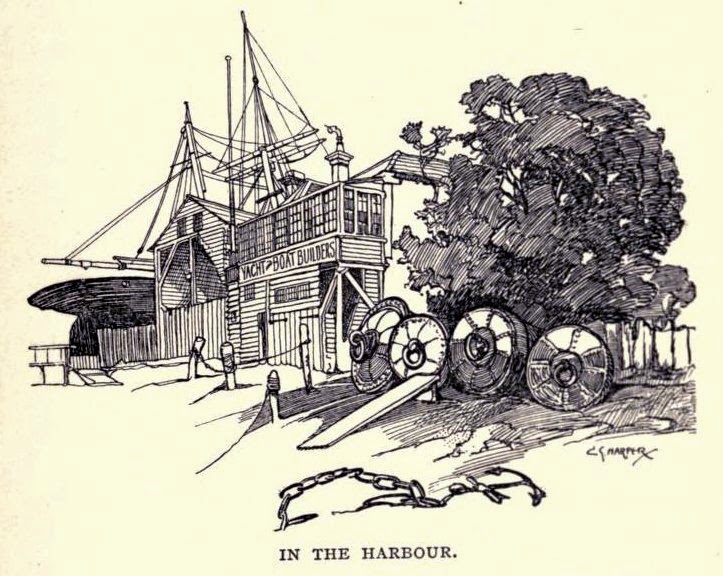 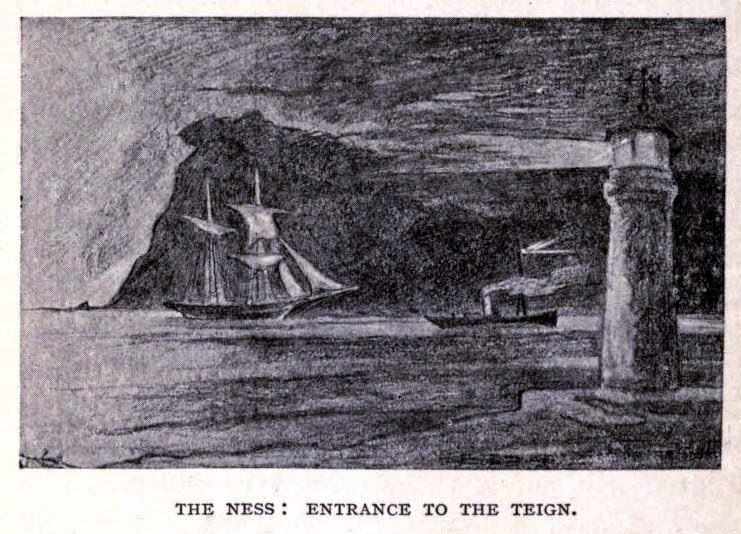 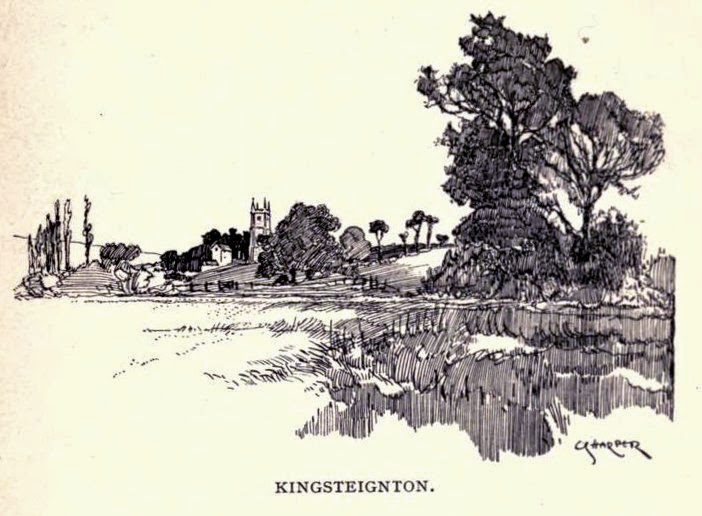 Continued at The South Devon Coast: #2 of 3.