An Isle of Wight New Year

I've posted this previously at A Wren-like Note, but I very much like Maxwell Gray's atmospheric description of a New Year party in an Isle of Wight village in the 1860s. Best wishes for the New Year to JSBlog readers.

This is Maxwell Gray's pleasant description of an Isle of Wight village New Year's Eve party in The Silence of Dean Maitland. It's set in the 1860s in "Malbourne", a fictionalised but highly recognisable Calbourne. "Northover" is Westover House, and the Sun Inn at the crossroads is real, and still exists. MG has got the position descriptions slightly askew; after descending Sun Hill to the crossroads, you need to turn 90 degrees clockwise to see the inn on the left.

1 “Dignity has burden”.
2 Both popular American-written parlour songs of the 1850s: see Rosalie, the Prairie Flower and Wait for the Wagon.
3 A game in which one player spun a saucer or trencher, and another nominated player had to catch it before it stopped spinning, or pay a forfeit: see pages 312-313, The traditional games of England, Scotland and Ireland (1894, Internet Archive ID traditionalgames02gommuoft).

If this party scene seems overly idyllic, it's for a reason; the author is setting the scene for a shock, when the festivities are interrupted by the news of the violent death of the coachman Ben Lee. 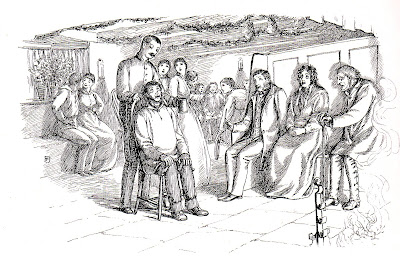 Maybe Isle of Wight cracknels were on the menu.