Cross-posted from A Wren-like Note: the odd bit of detail on the Newport-born author Maxwell Gray (Mary Gleed Tuttiett) continues to surface, often via researching something else. A sidetrack on patent medicines while writing the ATURFUQIL piece brought something of a surprise: Maxwell Gray giving a celebrity endorsement for the patent remedy Sanatogen.

Historically, Sanatogen - invented by the Bauer Chemical Company - was a preparation of 95% casein (milk curd - largely protein) and 5% sodium glycerophosphate. The American Medical Association's 1911 Nostrums and Quackery (Internet Archive nostrumsquackery00amerrich) explains how the reality - that it was a harmless and nutritious, if "ridiculously overpriced" food - differed from the sales pitch, that hyped it as a "tonic food" that "revitalizes the overworked nervous system" and offered "A New Life for Nervous Sufferers" (see pages 347-349).

The following advert with MG's testimonial appeared in various publications such as The Athenaeum (1909), The Solicitors’ Journal and Weekly Reporter (1909), The London Standard (1909), The Spectator (1910), and (slightly modified) The Sketch (1922).


What about Sanatogen
Ten thousand doctors have written in praise of Sanatogen. Thirty thousand doctors throughout the world are known to prescribe it. Hundreds of thousands of people have been restored from conditions of grave illness to complete health by its use. Among them are many well known men and women who have voluntarily testified to the debt they owe Sanatogen in restoring in restoring their health. A selection from their letters is published below.
What Celebrities Say about Sanatogen
...
Maxwell Gray - The Writer: "I have found Sanatogen helpful in digestive troubles and nervous weakness. I have taken it from time to time under medical advice."

It's probably uncharitable to point out the turnaround from MG's stated aversion to advertising in her 1902 rant A Plea for the Silence of the Novelist - "the charm of a world undefiled by advertisements". Her poor health and reduced circumstances in later life probably explain why she sold out. 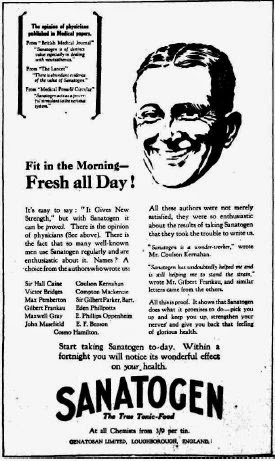 Even posthumously (she died in 1923), she was being cited in Sanatogen ads, such as this one in the Argus (Melbourne), 3 April 1928, page 20 (image via Trove, National Library of Australia digitisation project).

The list of celebrities cited in the Australian ad:
It's worth checking out; most of them are once-popular authors that have faded into obscurity.