Continuing the gallery of the 70+ images from The South Devon Coast (Charles G Harper, London: Chapman & Hall, 1907, Internet Archive ID southdevoncoast00harpgoog), a travelogue that's refreshing in giving a rather more personal set of impressions than the usual run of such books. I'll quote a few more highlights en route. 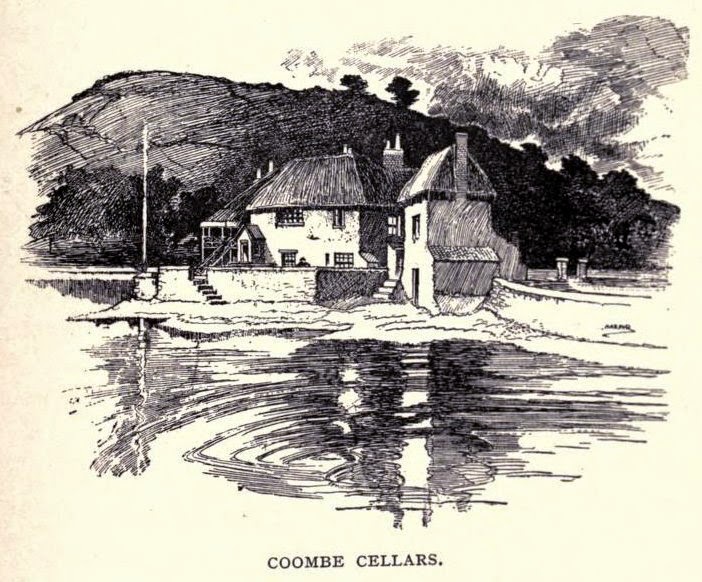 Harper's description of The Coombe Cellars is interesting; if he noticed increasingly commercialisation in 1907, he'd be amazed by it now.


Midway is Coombe Cellars, a waterside offshoot of Coombe-in-Teignhead ; a place, you  perceive, even in Keats' time, it was the recognised thing to visit and —

"... have your cream
All spread upon barley bread."

It was then a highly rustic spot; the oddest little promontory jutting out into the stream, and on it the "Ferry Boat" inn, built behind stout sea walls, and itself built of whitewashed cob, and heavily thatched. The "Cellars" were fish cellars, and the place was, and is, oddly amphibious ; the inn being half farmhouse and half fisherman's tavern, the landlord himself a farmer down to the waist, and a fisherman as to the legs and the sea-boots. At night you would find him out with the trawl-nets, to sea; at low tide in the morning cockling on the mud-flats off his inn ; and in the afternoon milking the cows or urging the plough in his hillside fields. To take boat from Teignmouth Harbour, and row up on the flood to tea at Coombe Cellars, returning with the ebb, was once a dehghtful thing, and, with a difference, is so still ; but you must not expect to be the only party there — no, not by a very long way, and you must by no means expect to get your tea, with or without Devonshire junket, strawberries and cream, or cockles, in quite so rustic a fashion or at such moderate prices as once obtained. And, although the house remains very much the same as of yore, the thatch has given place to a something less rural. 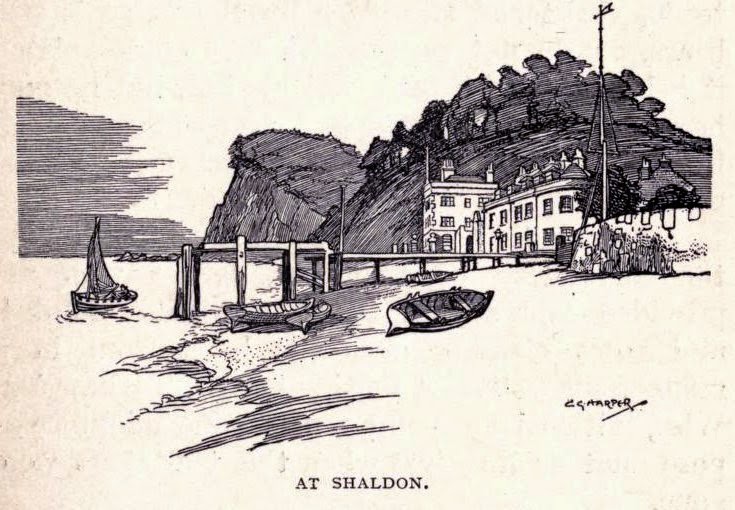 An example of Harper's very nice turn of phrase: his description of rock-pool exploration at Shaldon Ness:


The way is strewn with these immense pieces of red conglomerate, weighing anything from five to twenty tons; and those who wear india-rubber shoes and can best imitate the chamois in rock-leaping are those who like best the exploration of the Ness. For others there is that "harvest of the quiet eye" down in the rock-pools that the tide has left, where, among the trailing seaweeds, the limpet clings with the tightness of a moribund government clinging to power, and only to be removed in the same way; by the sudden, unexpected blow, like the Parliamentary snap-division; where transparent things, showing their inwards in the most indelicate way, flit about unconcerned at that publicity, and the hermit-crab justifies his sponsors by hurrying, presto, to some rocky cell when you disturb this little mare clausum. 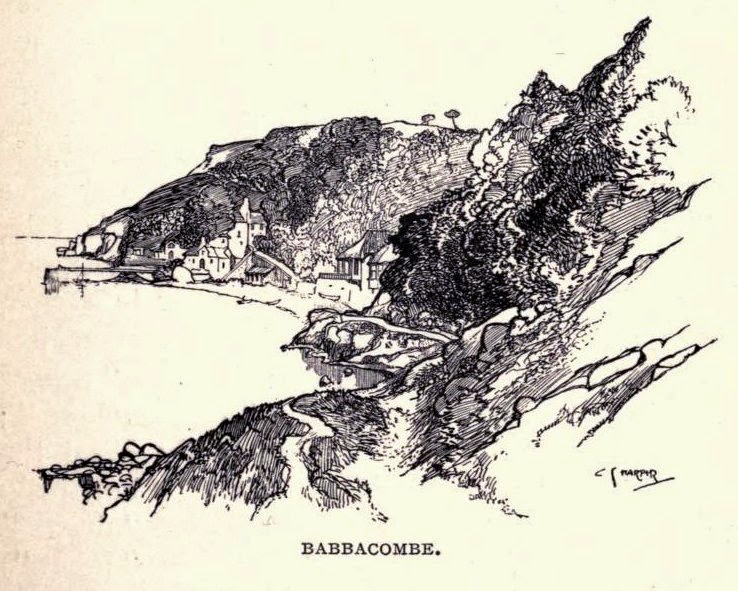 Around Babbacombe, Harper mentions Watcombe, and takes a moment out to give a rather jaundiced summary of the history of Watcombe pottery production:


But we anticipate, as the authors of Early Victorian novels were accustomed to remark, and have not finished with Watcombe, which is remarkable for having supplied the Romans with potters' clay and for providing us moderns with the same material. The Watcombe Terracotta Works, that stand by the high road, were established somewhere about 1875. Their products of statuettes for advertising purposes are sufficiently well-known, and I dare not hazard a guess how many of that famous group, "You Dirty Boy!" the works produced for an eminent firm of soap-makers. When what has been called the "Aesthetic Craze " set in, and all manner of weird wares, alleged to have some ''Art" quality, were thrust upon the public, the Watcombe terracottas were fashioned in the most awkward and "artistic" shapes, and painted with sunflowers and the most abhorrent colours, and in them that good, long-suffering public for a time found artistic salvation. But that was long ago, and the sunflower has wilted and the lily faded away. To-day, rustic humour and Old English models combined, capture the tourist. Puzzle-jugs and scraps of country talk find the readiest sale, and many a holiday-maker takes home with him butter-dishes, jugs, and plates with such legends as "Go aisy with the butter,'' ''Help yo'self to some Demsher crayme," or that noble triolet —

Actually, Watcombe art pottery, before it degraded into "motto-ware", was not at all bad; see the Torquay Pottery Collectors Society. 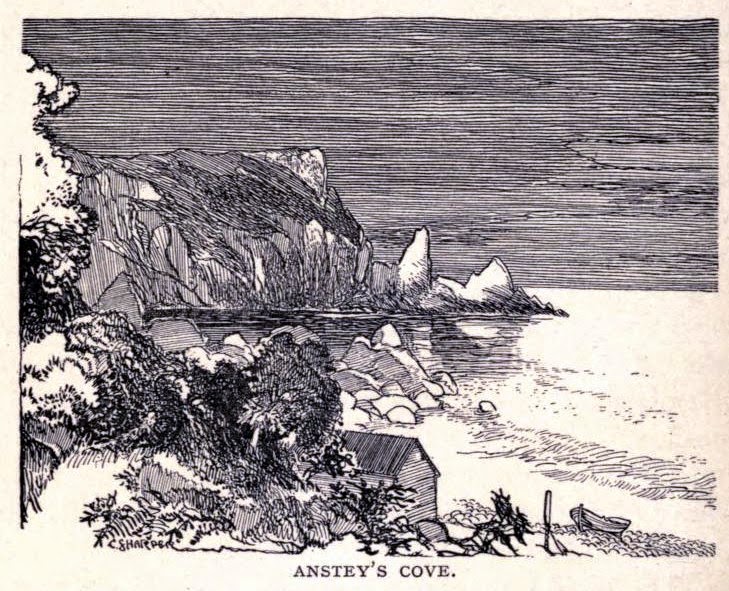 He likes the quaintness of Anstey's Cove:


Anstey's Cove is the same as ever: one of the few places that have not changed of late years. Still the path leads down ruggedly to the little beach of big white marble pebbles, still the hollow is filled with a wild ferny brake and with old thorn-trees, hung, like the liana-choked forest trees of South America, with tangled strands of wild clematis. And although the original Thomas, who, half a century ago supplied picnics with necessaries, has long since assumed his crown and robe of white up above. the poetic notice board written for him still survives, and Thomases of a later generation are to be found in their wooden shanty on the beach, where they continue the traditions — or some of them — of :
"Picnics supplied with hot water and tea
At a nice little house down by the sea ;
Fresh Crabs and Lobsters every day,
Salmon Peel sometimes, Red Mullet and Grey;
The neatest of pleasure-boats let out on hire ;
Fishing Tackle as good as you can desire ;
Bathing Machines for Ladies are kept,
With Towels and Gowns, all quite correct.
Thomas is the man who provides everything :
And also teaches Young People to swim."

Some enthusiastic scholar has even done this into Latin, and the result is seen on the wooden walls of the shanty.

The Discovering Britain booklet Coves and cliffs (A self guided walk along the coast at Babbacombe in South Devon) has images of the sign, as well as Mr and Mrs Thomas standing underneath the Latin version. 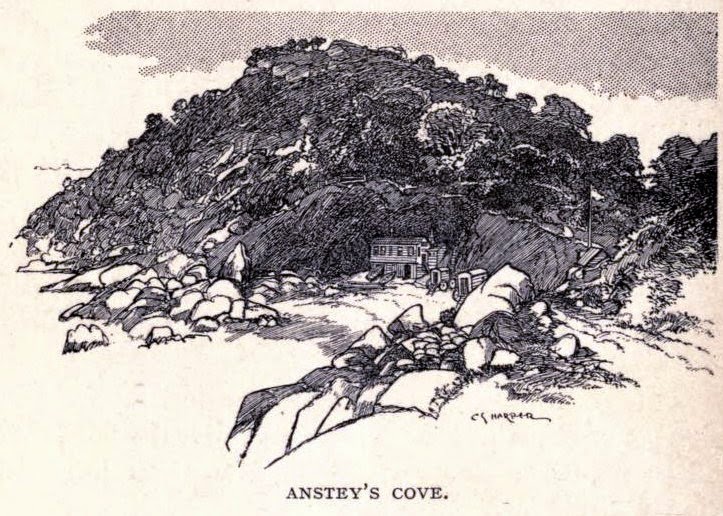 And on toward Torquay...


Near by, but hidden from view by its enclosing grounds, is that semicircular group of villa residences, Hesketh Crescent, built, some forty years ago, on the model of the classic terraces of Bath and Buxton. Little postern gates lead from the grounds on to the road at Meadfoot, and from them the early riser on summer mornings may observe strange figures, clad in gorgeous dressing-gowns, shuffling in bath slippers to the sea, the bright sunshine making heliographs of their bald and shining pates. It all looks like some newer version of Robinson Crusoe, or the Swiss Family Robinson; but these old gentlemen are only the retired generals and colonels of Hesketh Crescent, out for their morning dip, and are so little like marooned inhabitants of uncivilised isles that they will presently enter their postern-gates again, and go home to breakfast and the morning paper, over which they will with fervour and unction damn the War Office and the Army from head to foot — a valued privilege denied to Robinson Crusoe.

Hesketh Crescent still exists as a development of exclusive apartments. 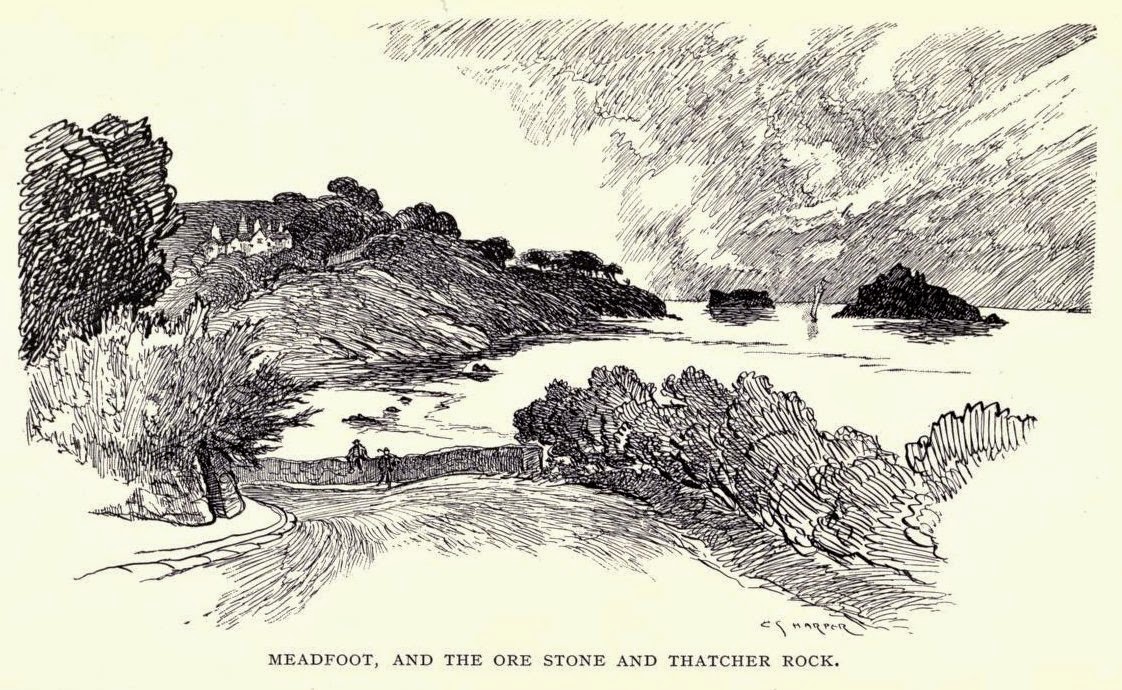 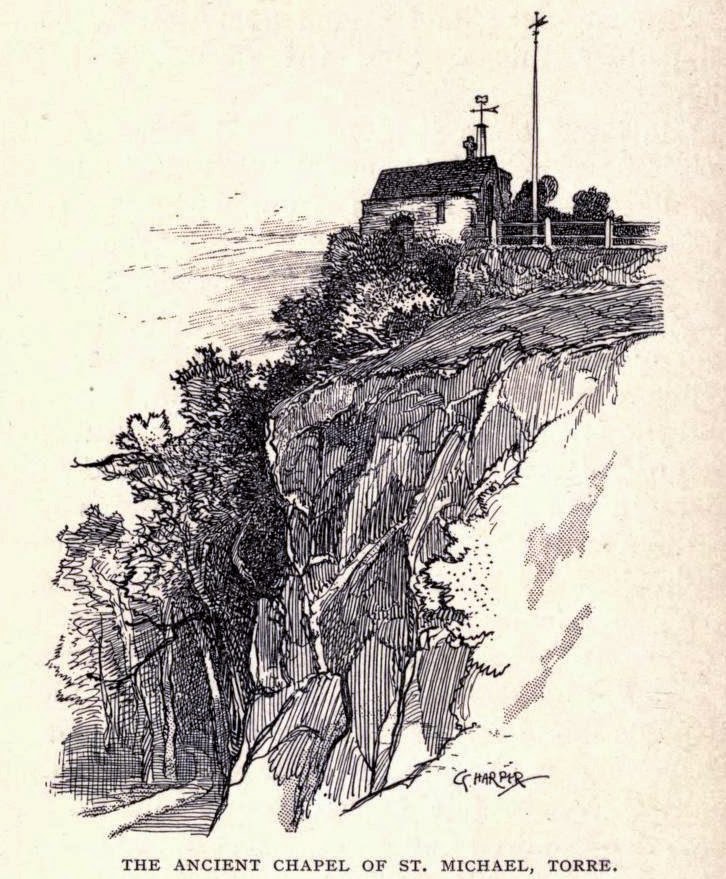 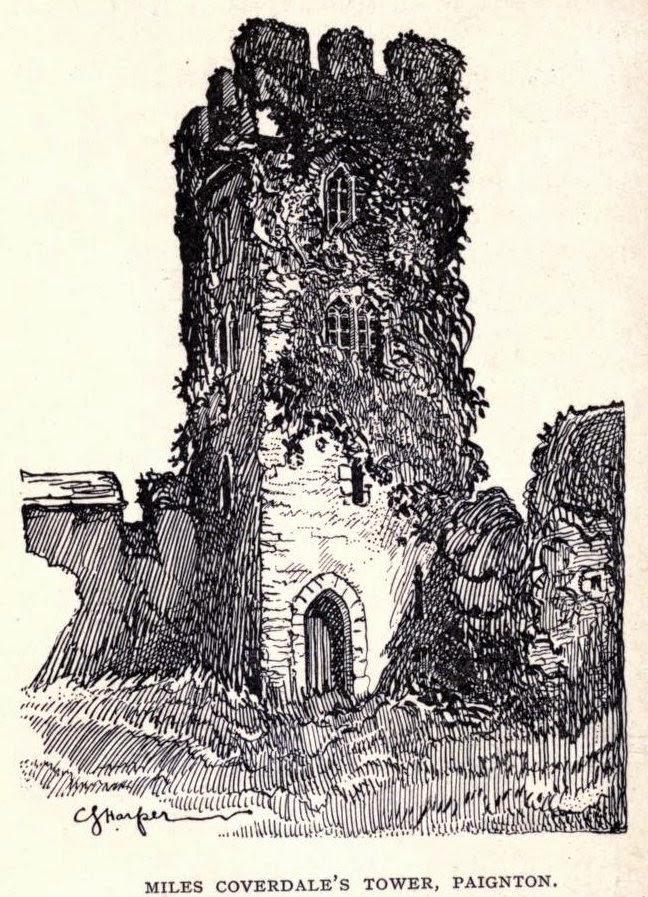 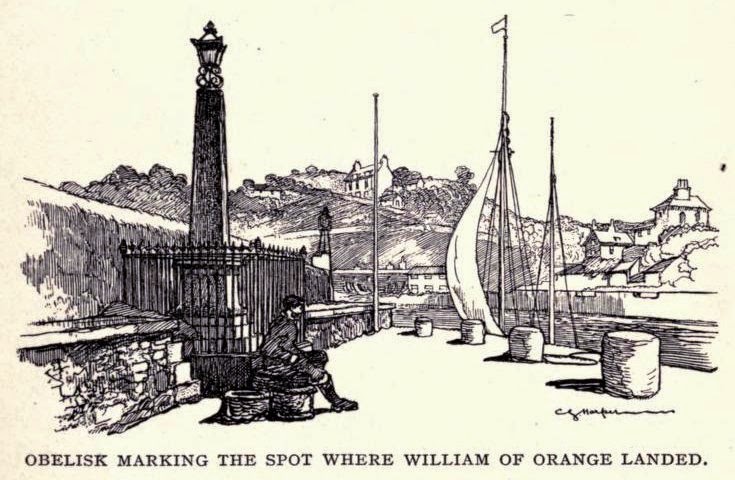 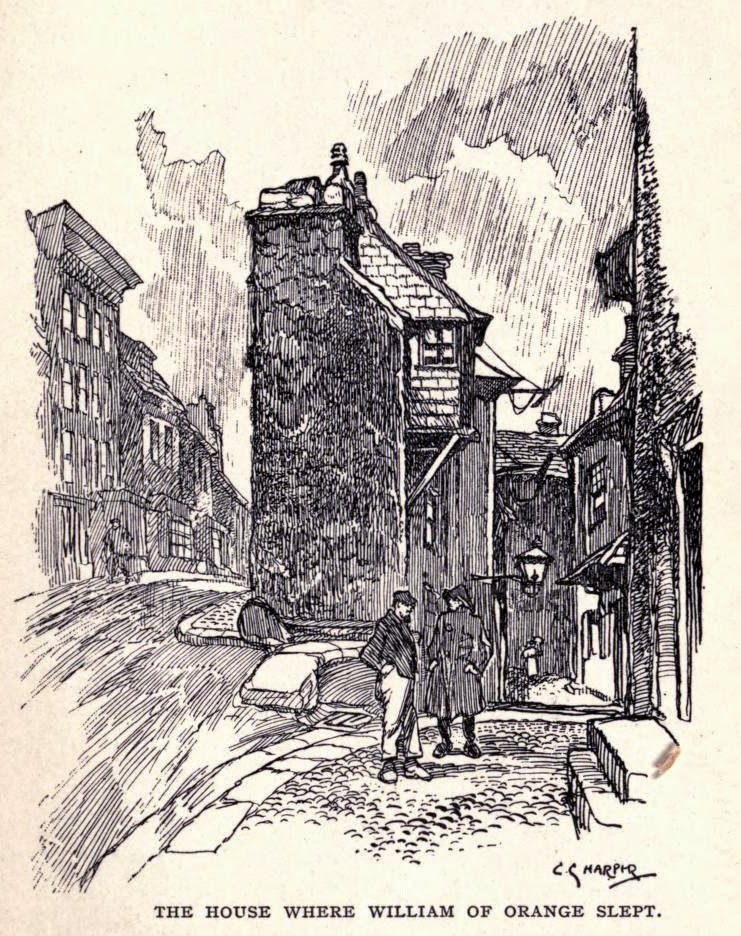 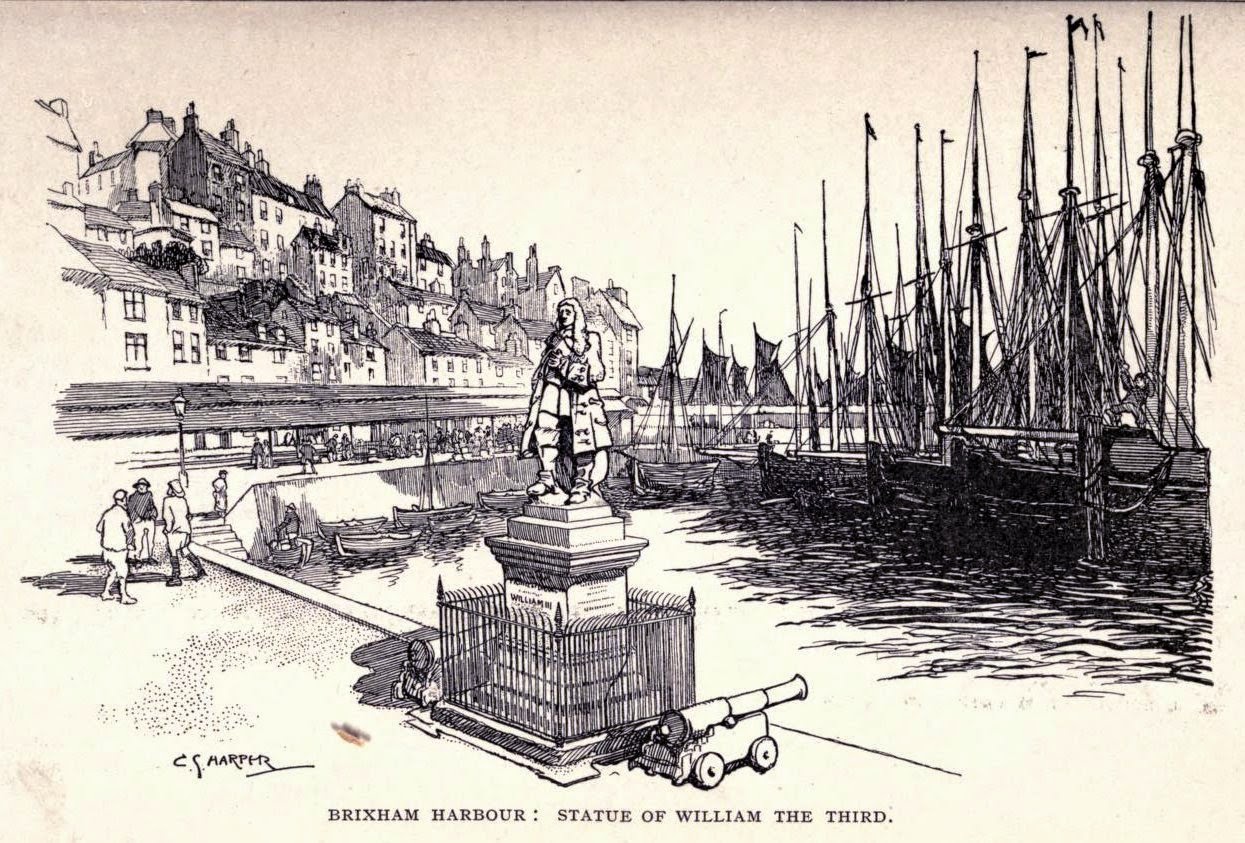 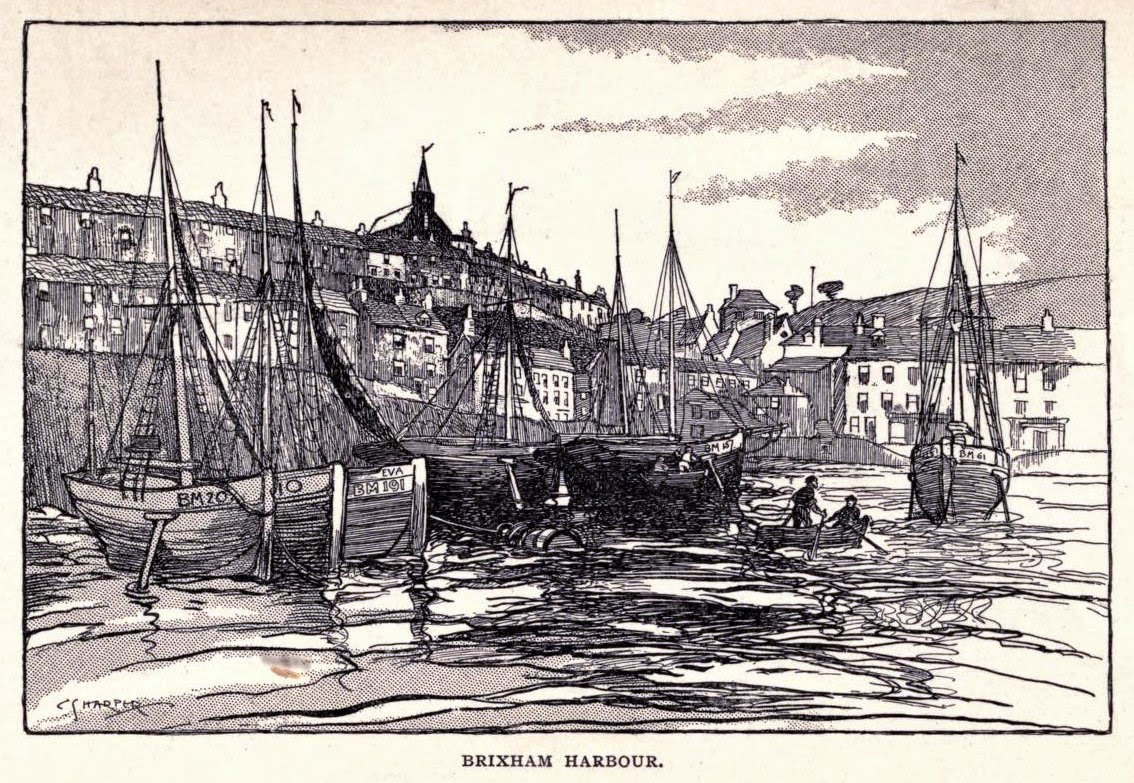 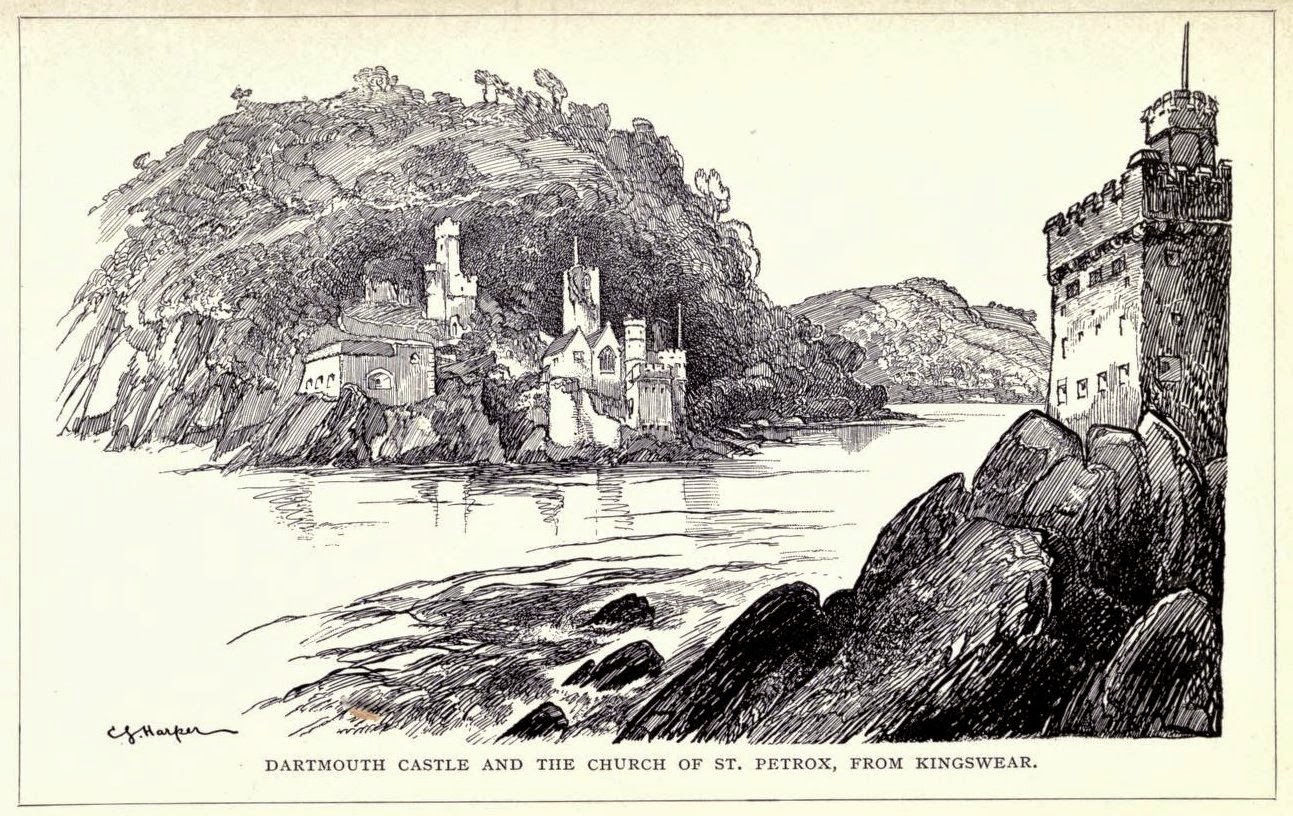 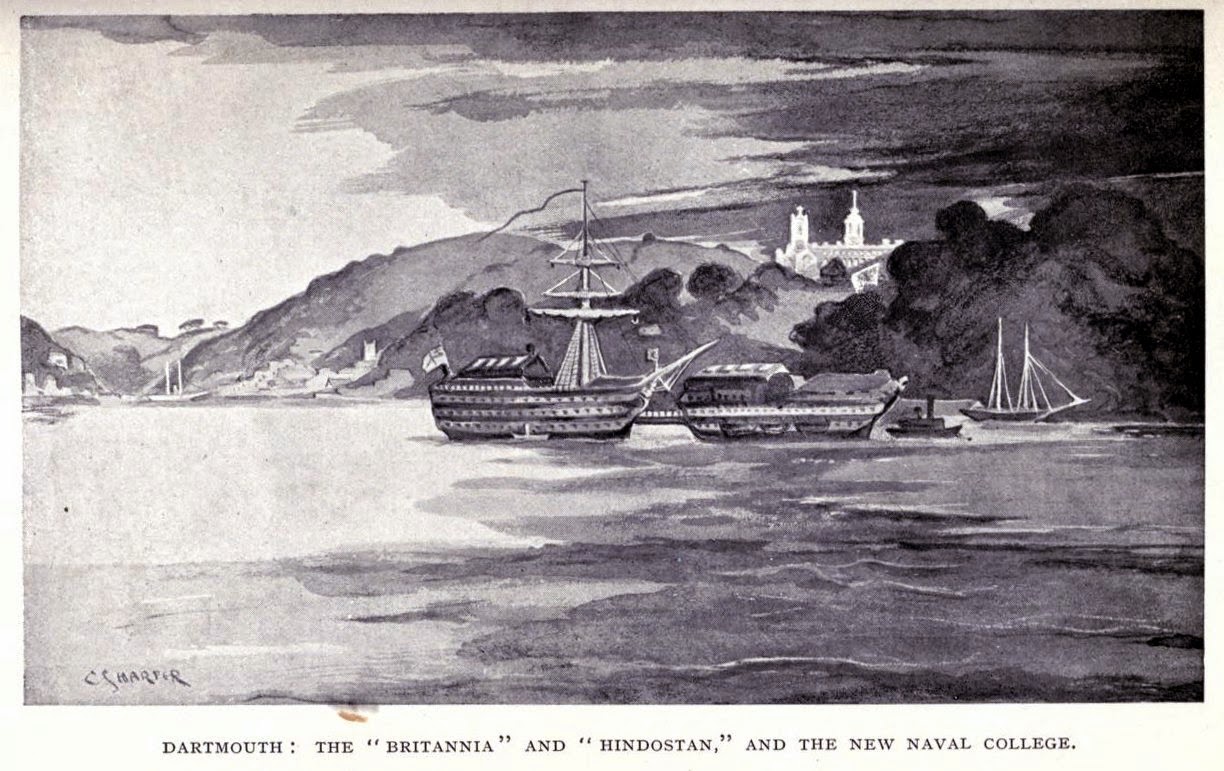 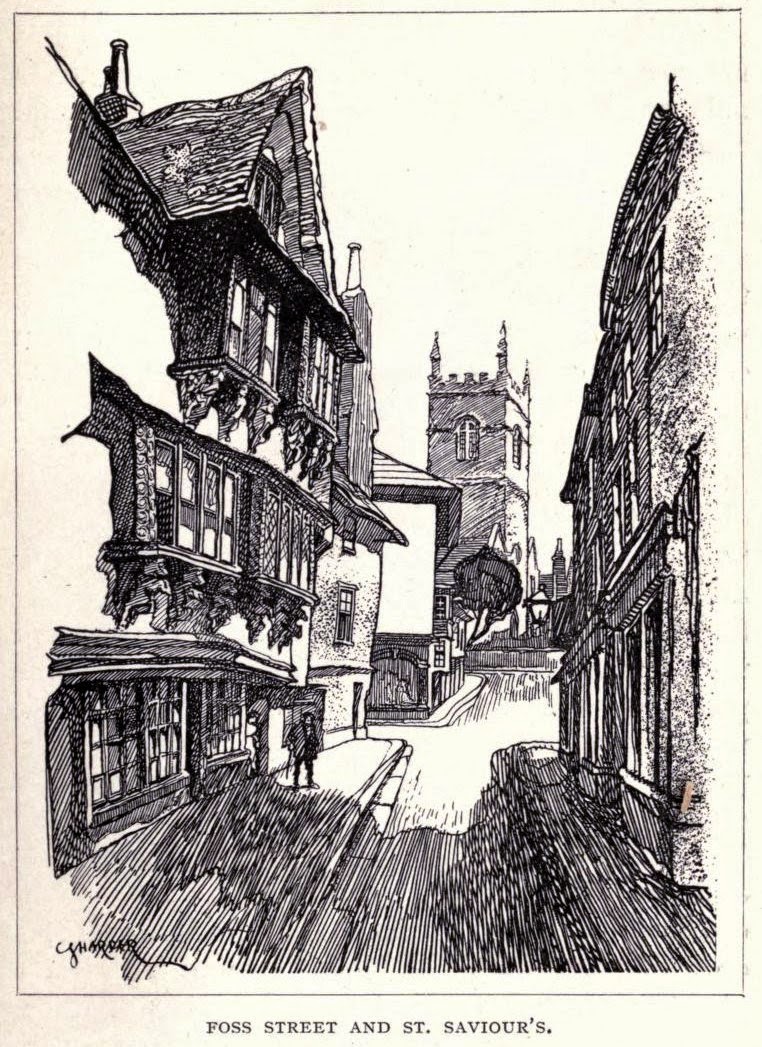 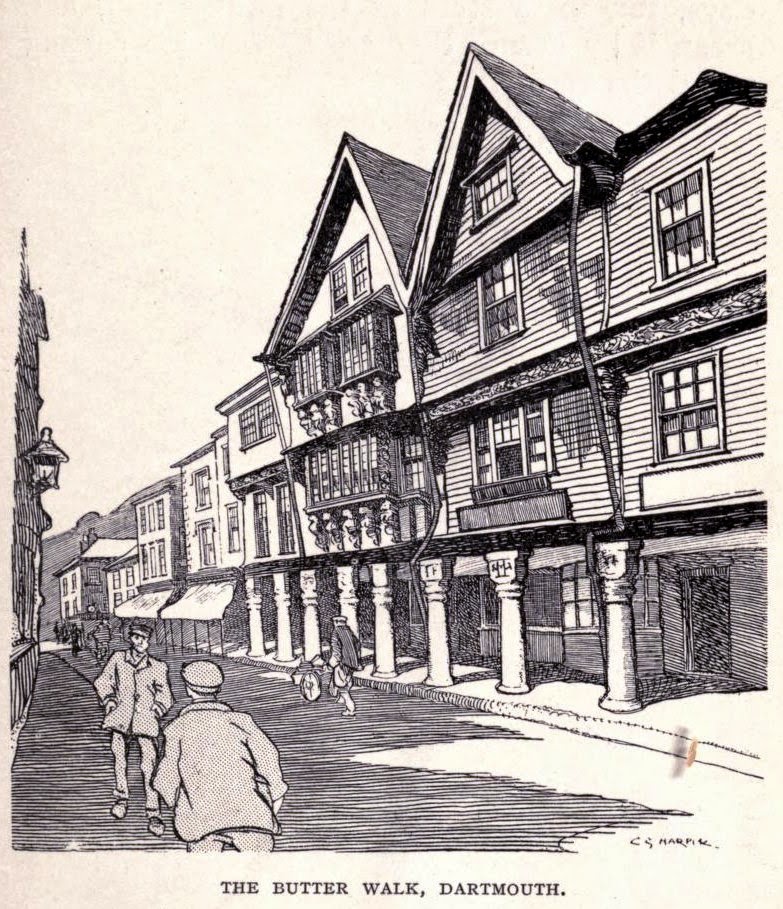 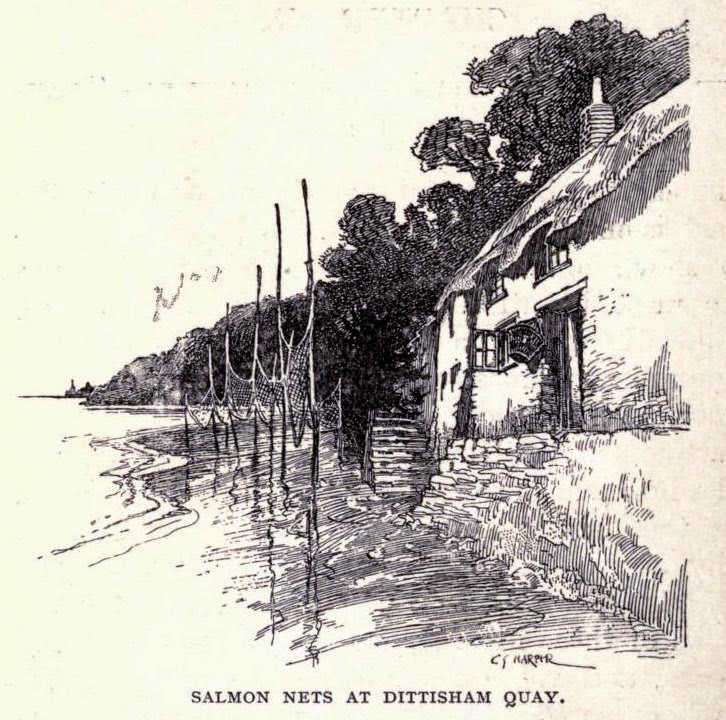 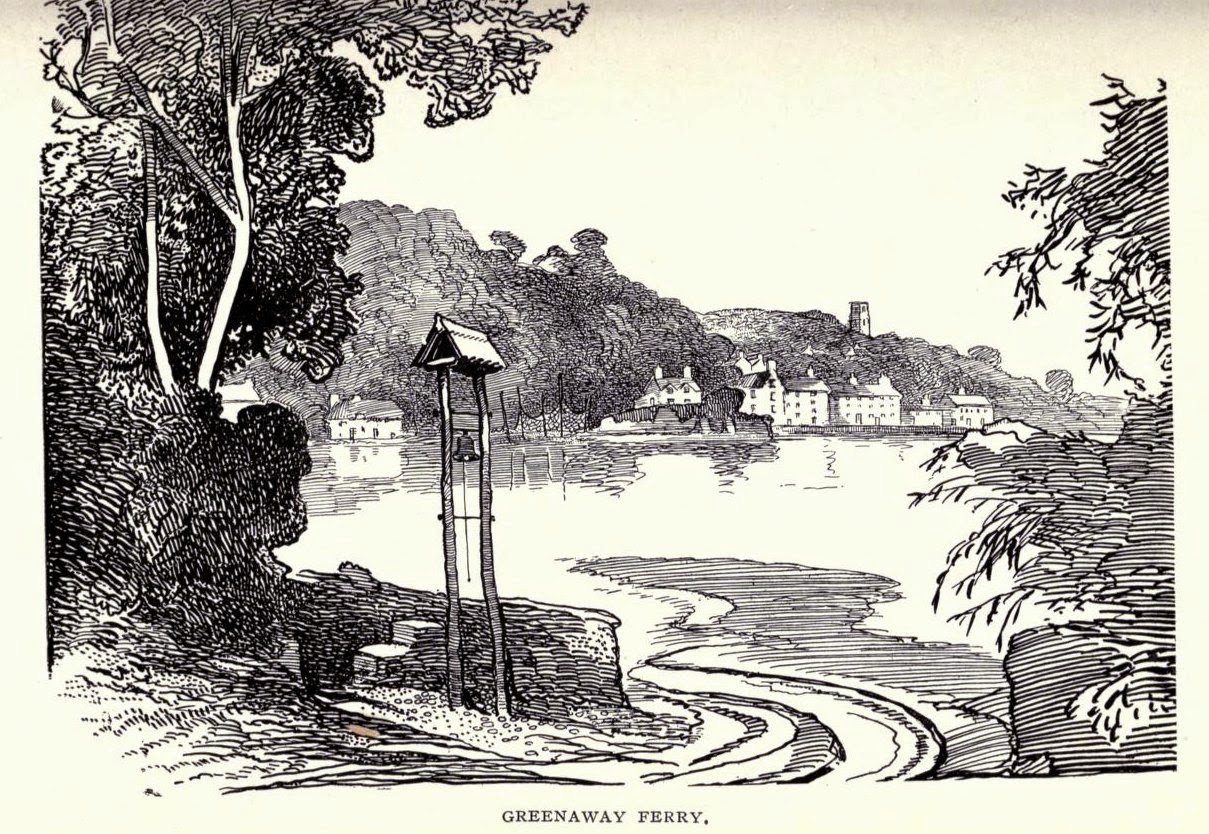 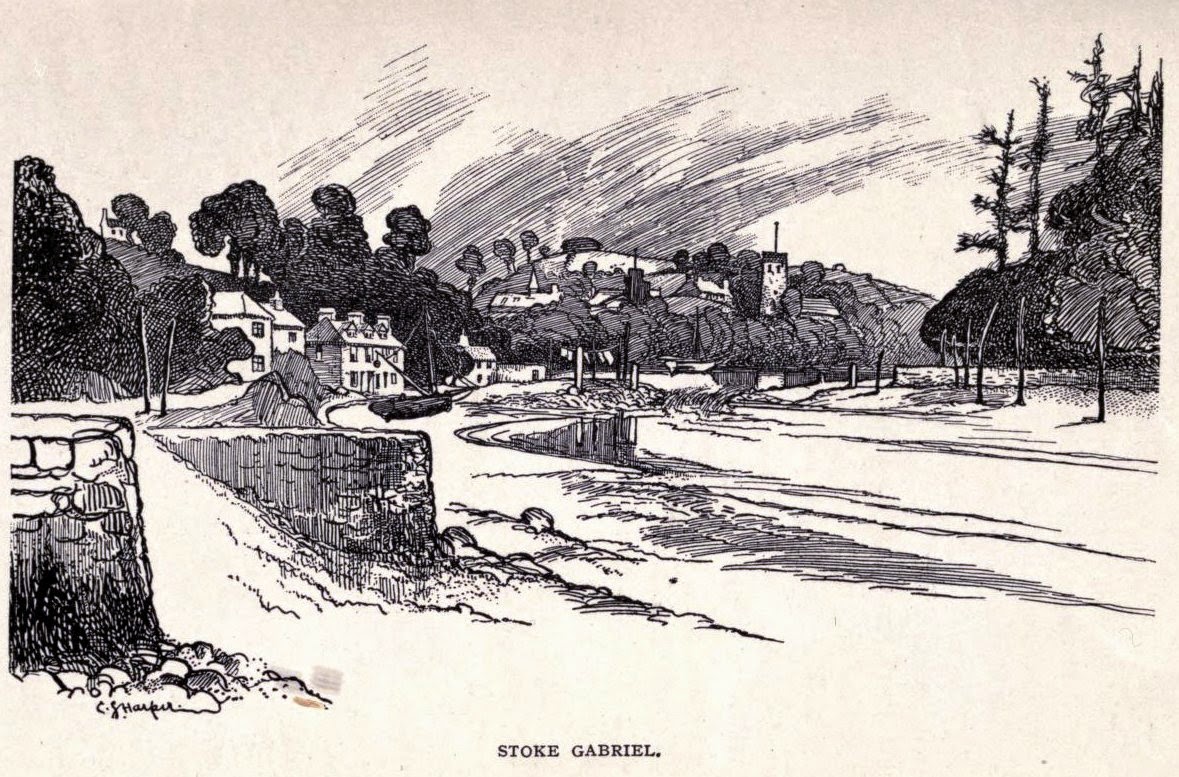 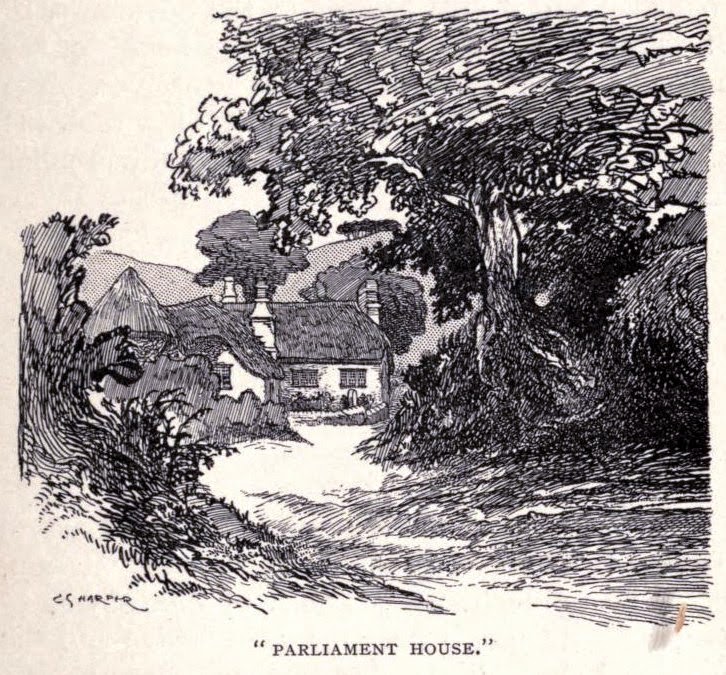 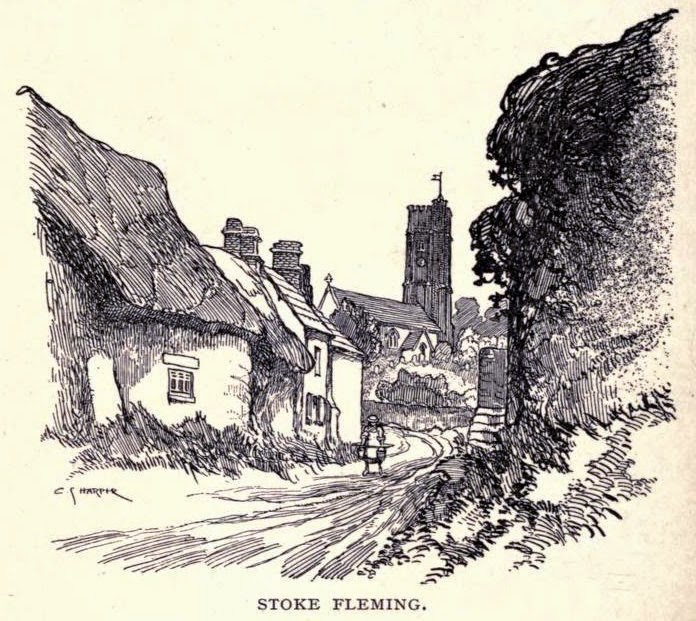 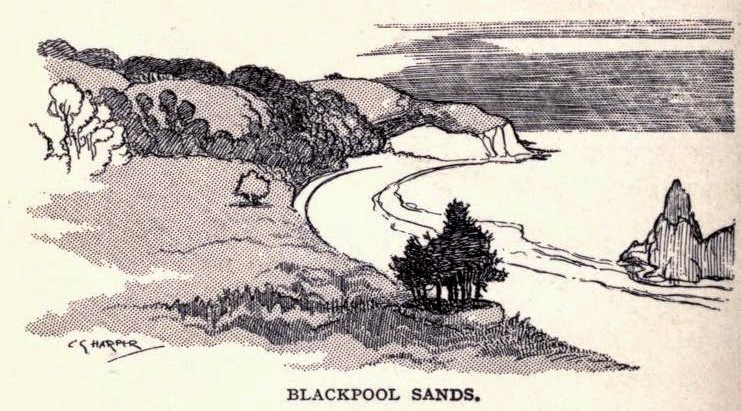 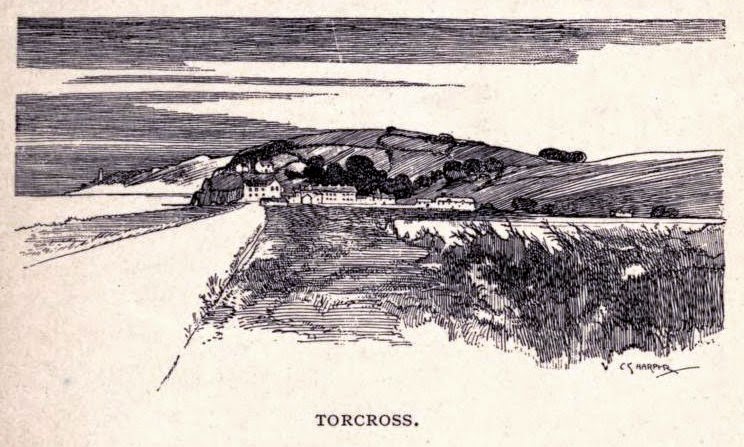