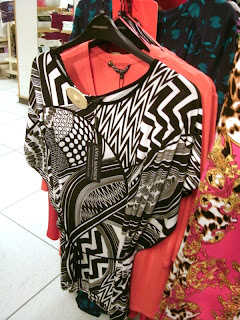 Just purging my camera, I found this photo I took a while back in a department store in Exeter.

I don't normally photograph dresses in shops, but this one struck me because its zones of mismatched patterns are highly reminiscent of the dazzle camouflage (a.k.a. razzle dazzle or dazzle painting) used on World War One ships: as Wikipedia puts it, "not by offering concealment but by making it difficult to estimate a target's range, speed and heading".

It wasn't until I was reviewing the photo that I read the label, and found, Googling, that it's part of the Anya Madsen Copenhagen range for larger-sized wearers. Is the design meant to disguise the wearer's outline, to make it difficult to estimate the wearer's range, speed and heading? But whether intentional or not, the resemblance of this migraine-inducing design to the camouflage system - see more images - is striking.

Camoupedia ("A blog for clarifying and continuing the findings that were published in Camoupedia: A Compendium of Research on Art, Architecture and Camouflage, by Roy R. Behrens, Bobolink Books, 2009") has examples of precedent for the use of dazzle camouflage in mainstream fashion: see Dazzle Camouflage Swimsuits, Dazzle Swimsuits Déja Vu, and Vaccination Camouflage and More Swimsuits. The blog Evil Mad Scientist has noticed similar: Dazzle Camouflage in Fashion.