One Saturday afternoon I took myself off to Budleigh again. Last time - see Sherbook now (9th February 2013) - it was chilly, overcast and drizzling, and I was only just creeping out of the exhaustion of chemotherapy. How different now. Even as I walked up Rolle Road toward the esplanade - the air smelt of chips and sea - there was a promise to the afternoon; and it turned out completely up to expectations. 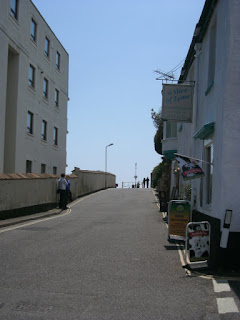 There's a risk of being boring by re-documenting walks I've done a number of times previously; but the East Devon coast and seascape are immensely variable in atmosphere. Now, with spring starting, it's dry underfoot and the paths have become tunnels of foliage. I hope I didn't get home reeking of garlic, because for part of the walk I was munching on stalks of three-cornered leek (Allium triquetrum - see Eat Like a Girl), a delicate and sweet-tasting member of the onion family whose white bluebell-like flowers are now in bloom. Up on the pebbly sandstone heath of West Down Beacon, the gorse is now in full bloom, and the air has an intense coconut scent. And it was an especial buzz to be doing the walk feeling fit again, after the moments last year when I had fears I wouldn't get the chance. Anyhow, on to the walk: 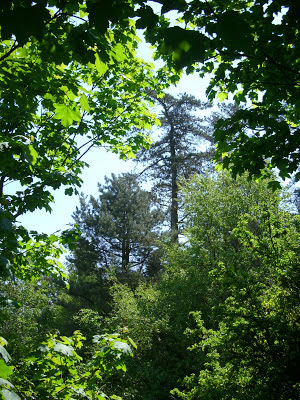 One of my particular projects has been to take a yet closer look at Sherbrook Chine. The South West Coast Path runs above the western edge of this rift, and I was interested to see if it's possible to get to the prow of land (above) on the eastern edge. It is. A little pushing through the undergrowth where the path crosses the stream that feeds the chine takes you into easily passable conifer woodland; there's even evidence of an overgrown track leading along the western rim. I didn't risk going all the way to the exposed tip of land - what you can't see from here, but can from the beach level and from aerial shots, is that there's a very sheer cliff edge on the other side. However, I did go as far as the end of the old path, where the wood starts to thin out. You can't see much of the chine, beyond a wall of vegetation opposite, and photographs don't do justice to its sheer depth. However, I'm pleased to have checked it out at last.